Hillary Clinton’s Nomination Met With Joy From Many Women at DNC, But Disenchantment From Others 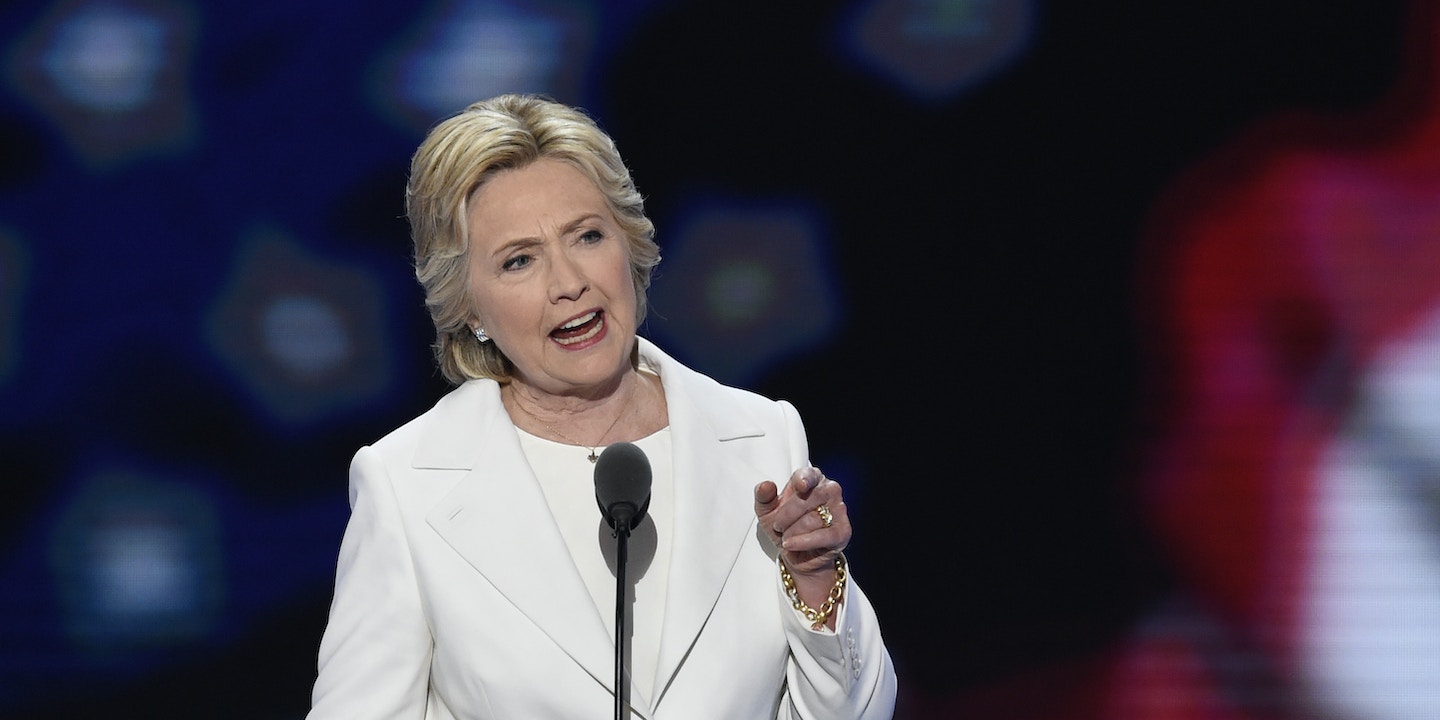 As the Democratic Party formally announced its nominee on Tuesday night, the gigantic screen at the Wells Fargo Center showed images of the last 44 U.S. presidents until, with a great shattering sound, Hillary Clinton appeared from behind virtual glass shards.

It was not subtle. Some found it emotional; others found it corny. And in a week that’s been defined by profound divisions inside the convention hall — and greater ones between the convention and the streets outside –- the significance of Clinton’s breaking of a gender barrier also elicited a split response.

As Clinton became the first woman to receive the presidential nomination of a major party, there were those who celebrated her achievement — and those whose deep disenchantment with her and the Democratic leadership remained unaffected by her gender.

Among women, in particular, Clinton’s nomination only seemed to accentuate gaping divisions.

At a DNC women’s caucus meeting on Thursday morning, the crowd was jubilant and running high on the emotions of the week. Hundreds of women of all ages decked out in “I’m with her” gear and pink Planned Parenthood shirts filled the room, as inspirational videos of little girls saying they wanted to be president played in the background.

“My sisters, we have made history here in Philadelphia,” convention CEO Leah Daughtry told a roaring crowd. “Just think that less than 100 years ago, a woman was not even guaranteed the right to vote, and just think that a little over 50 years ago, an African-American woman, Fannie Lou Hamer, was not even permitted to be seated at our convention. And now, we have nominated our first woman to be president at a convention run by an African-American woman.” Kelly Jacobs, a 57-year-old delegate from Mississippi, was ecstatic. She wore a gold chain with President Hillary spelled out in sparkling stones, a Hillary Clinton hairpin over her pink hairnet, a huge portrait of the candidate printed on her dress, and a picture of the White House showing through one of her skirt’s layers. The four-time delegate said she had printed Clinton’s face on the fabric herself — and had created a different outfit for every day of the convention.

“It may have seemed cheesy, but for a lot of us, breaking the glass ceiling was a rallying cry,” she said, tearing up. “It’s not just for her, it’s also for those of us who have tried to get promoted, tried to get paid the same as men.”

Jacobs recalled being harassed as the only woman on her water polo team in the 1970s and spoke of growing up watching disempowered women on television. “Your generation hasn’t spent years and years not seeing any woman at the top,” she said. “When I was growing up, the woman on TV was Bewitched, and her husband was always putting her down. It wasn’t until Judge Judy came and she was kicking ass and saying ‘I’m smarter than you’ that perceptions changed. Now, you just take it for granted that there are women judges, women in charge, but when I was growing up, there was none of that — there was Hazel, a woman cleaning house. It was all about putting women down and suppressing them.”

Jacobs said some Bernie Sanders and Donald Trump supporters harassed her on the subway, laughing at her Hillary outfits and yelling at her, “I’m not voting for that bitch.” “They have been horrible to her, her entire career,” she said of Clinton. “Because they’re sexist. And we’re sexist, women too, our entire country is sexist because we have accepted that.” Inside the convention arena, a women’s group raffled off a doll dressed in a shirt that read “Someday a woman will be president!” — the same shirt that Walmart controversially banned in the 1990s. Outside, people sold “Hill Yes” pins and a man in a red dress, pearls, and a Bill Clinton mask carried a sign saying “First Lady Bill.”

But blocks away, and across the city, many signs bearing Hillary’s name had the word “never” preceding it.

If the nomination was a historic moment, it had taken the country so long to get to it that many, especially younger women, shrugged at the idea.

And even more significantly, Clinton’s unpopularity and the heated criticism of her politics far overshadowed any excitement over her achievement.

“I don’t care,” Sally Briggs, a Bernie Sanders supporter from Colorado, said in reference to the shattered glass ceiling. “When the right woman becomes president, great, but Hillary shouldn’t be that woman.”

Briggs, who is 59 and had her own “Sally for Bernie” pin made, added that she often found herself siding with younger women over her peers, who she thought allowed Clinton’s gender to distract them from her record. “She keeps on the woman thing so there’s less time to talk about her corruption and her bad foreign policy,” she said. “That doesn’t matter to younger women, because they already are empowered. They support who they want to support.”

Is Hillary Clinton a feminist?

Clinton’s nomination also revamped an old question: Who is a feminist, and is she one?

“I say, let’s unpack that word a little bit,” Medea Benjamin, founder of the antiwar women’s group Code Pink, said at a rally earlier this week. “Would a feminist have to hesitate one minute to say that working people deserve a living wage, especially women who are at the bottom of the rung? Would a feminist say that we should invade a country that has never done us any harm?” Benjamin called out Clinton on her lack of support for Palestinian women and her close ties to women-repressive Saudi Arabia. “People have said to me, come on, we need a first woman president,” she added. “And I say, yes, we do, and that is [Green Party candidate] Jill Stein.”

Similar questions were raised at a women’s “speak-out” held at a local church on the sidelines of the convention. The event, which drew mothers of victims of police violence, Flint residents, indigenous activists, and one of the most diverse crowds of the week, was opened by Laura Zuñiga Cáceres, daughter of the slain Honduran activist Berta Cáceres, who before her assassination had called out Clinton’s support for the Honduran coup.

“We have an opportunity to talk about what feminism looks like for us. Whenever I go abroad, people ask me if Hillary Clinton is a feminist, and I don’t know what to say about that,” Helena Wong, a community organizer, said at the event, as someone from the crowd shouted back, “Say no!”

“We have to call out the idea that having a woman in power is actually a step forward,” Wong added. But, she noted, “Berta was murdered under the Democratic Party, and Hillary Clinton, who was secretary of state, has publicly stated that she supported the coup that has created the conditions for the criminalization of protest and the murder of human rights activists in Honduras and around the world.”

At the event, women spoke of fair wages, environmental rights, and state violence at home and abroad — rarely of women directly.

“There’s been a kind of institutional feminism that’s been promoted by women like Hillary Clinton,” Ana Martina, a community organizer originally from Mexico, said while breastfeeding her 10-month-old daughter. “Feminism is more holistic. For a woman to think that they’re being represented by a feminist in Hillary is totally wrong. She’s a right-wing candidate, no better or worse than Trump.”

But the specter of a possible Trump presidency — and the ways in which the Republican nominee has spoken to and about women — also served for many observers as a reminder of the progress women have yet to make. “Donald Trump changes his mind three times a day, but the one thing that’s been consistent is a pattern of misogyny,” said Zach Wahls, an Iowa delegate who spoke at the last DNC after a video he made about being raised by two lesbian mothers went viral. Wahls was selling decks of “woman card(s)” designed by his younger sister in response to Trump’s use of the expression — with Clinton as the ace, Ruth Bader Ginsburg as the King, and Beyonce as the Queen.

“It’s very clear that this is a man who does not respect women, believes women should not have an equal place in our society,” he said. “He sees himself as superior to women because he’s a man.”

“That’s the thing with Trump, it’s that he says things that people are actually thinking, and we didn’t see that before,” echoed Brittany MacPherson, a 25-year-old delegate from Oregon, who was wearing a hat covered in pins with slogans like “Another feminist for Hillary.”

“We got our first black president and people were like, racism doesn’t exist in America! When Obama’s presidency made racism so much more evident than it had been,” she said. “And now with Hillary, we’re seeing the sexism come out, and if she wins — when she wins — there will be so much more sexism uncovered.”

MacPherson said she supports Clinton because she is “the most experienced person to ever run for president.” “But I don’t shy away from saying, ‘Yes, I am voting for her because she’s a woman,’ because representation actually matters,” she added.

That’s the very idea that many Clinton critics rejected.

“We don’t want people to just say, ‘Well, we have a woman.’ It’s what the woman stands for and what she has demonstrated that’s more important,” said Pat Albright, a community activist and former single mother and welfare recipient who slammed Clinton for her past support of a number of policies that had a devastating impact on poor families and women.

“We want women in positions of power to stand with those with less power and support our demands rather than be there to further their own interests. We don’t want someone to just mirror the power structure — the worst of the power structure,” she said. “We’d rather have a man who’s really representing us.”