The most powerful speech on Hillary Clinton’s behalf on Thursday night came from the father of an American Muslim soldier who was killed in the Iraq War. 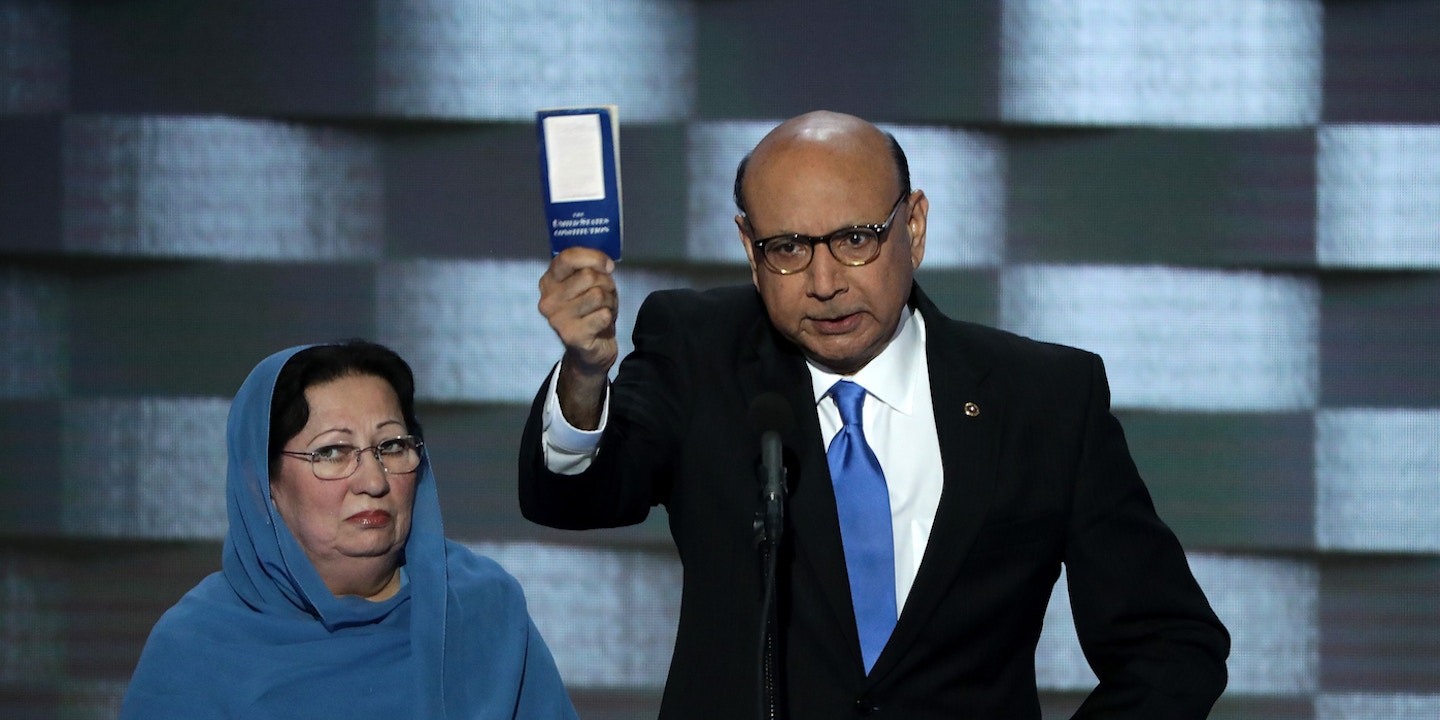 Given that Hillary Clinton’s Senate vote, on October 11, 2002, to authorize the invasion of Iraq might have been what cost her the Democratic nomination for the presidency in 2008, it was remarkable that the most powerful speech on her behalf on Thursday night in Philadelphia came from the father of an American soldier who was killed in that war.

However, the words of Khizr Khan — a Pakistani Muslim immigrant, whose son, Capt. Humayun S.M. Khan, was posthumously awarded the Bronze Star and Purple Heart for saving the lives of fellow soldiers in Baquba, Iraq, in 2004 — were not about the wisdom or morality or politics of the war. They were about how his son’s love of country, and his family’s sacrifice, exposed the anti-Muslim bigotry behind Donald Trump’s plan to bar followers of that faith from becoming Americans.

“Hillary Clinton was right when she called my son the best of America,” Khan said, standing beside his wife, Ghazala. “If it was up to Donald Trump, he never would have been in America.”

In a powerful 90 seconds at the heart of his speech, Khan then addressed the Republican candidate directly, with quiet dignity: “Donald Trump, you are asking Americans to trust you with their future. Let me ask you: Have you even read the United States Constitution?” Reaching slowly into his jacket, Khan then removed a small booklet and held it aloft, saying, “I will gladly lend you my copy.”

WATCH: Khizr Khan, father of slain US Army Capt. Humayun Khan, to Trump: "Have you even read the US Constitution?" https://t.co/lMUErPnFS2

“In this document, look for the words ‘liberty’ and ‘equal protection of law,’” he continued. “Have you ever been to Arlington cemetery? Go look at the graves of brave patriots who died defending the United States of America. You will see all faiths, genders, and ethnicities.”

“You have sacrificed nothing, and no one,” he added. “We cannot solve our problems by building walls.” 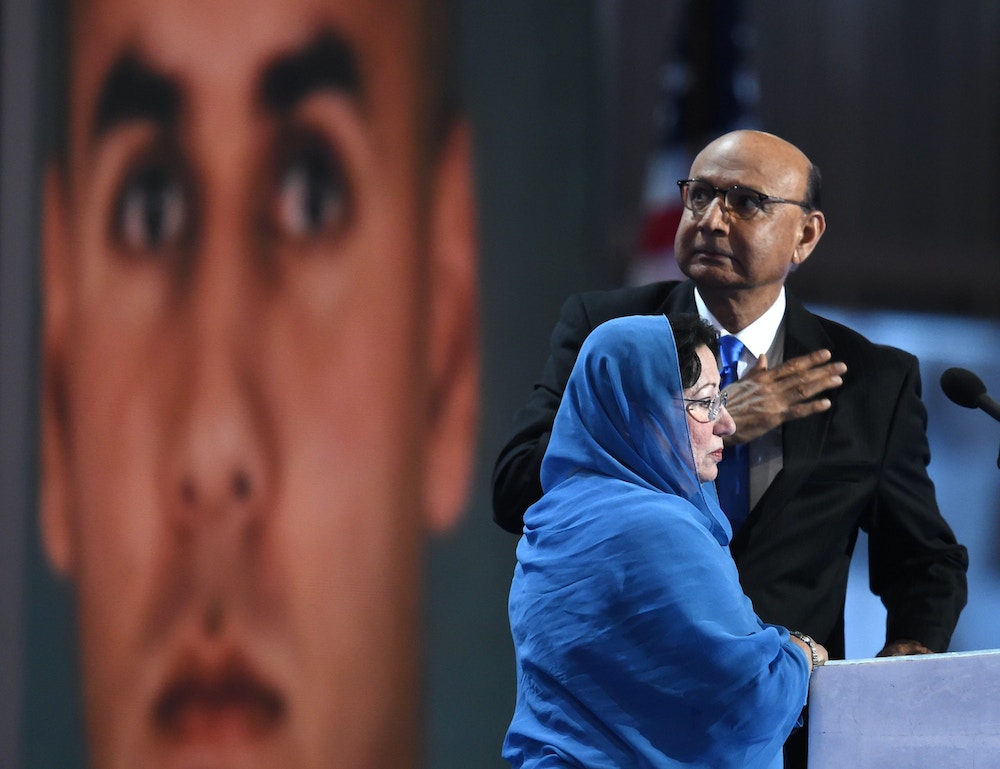 Khizr Khan and his wife, Ghazala, in front of an image of their son, Capt. Humayun S. M. Khan.

Khan’s speech was met with tears and applause in the hall and electrified social networks — earning praise even from prominent conservatives, like Rich Galen, a former press secretary for Newt Gingrich who worked for the Bush administration’s Coalition Provisional Authority in Iraq, John Podhoretz, the editor of Commentary, and John Weaver, a campaign strategist for Gov. John Kasich.

Khizr Khan is giving the speech America has needed to hear.

Standing ovation for Khizr Khan & his wife- they lost their son in war. #muslim #american "we are stronger together" pic.twitter.com/O3nnWSG83r

A historic moment when Khizr Khan, father of one of 14 Muslims who died serving the U.S. after 9/11, got a standing ovation at the #DNC.

How can it be that I am standing at my kitchen counter sobbing because of the messages being driven at the DNC? Where has the GOP gone?

The Khizr Khan speech is just going to enrage Trumpkins because somewhere inside, it made them ashamed.

I will take the America of Khizr Khan & his fallen son over Trump's distorted & selfish version every day of the week.

Khizr Khan was an immigrant from Pakistan. Today he delivered one of the most powerful speeches at the DNC. This is America. #DemsInPhilly

As Andrew Sullivan noted in his live blog for New York magazine, Trump supporters following the convention on Fox News were not forced to deal with the uncomfortable implications of Khan’s speech, since the network chose not to air it.

Instead, as Media Matters for America documented, the network’s hosts offered punditry as a video about Capt. Khan’s death played, and then showed an anti-Clinton attack ad about Benghazi, followed by commercials, as his father began to speak.

Then at 9:15 p.m., just as Khan moved to the climax of his speech, the Fox anchor Megyn Kelly alerted her viewers to what she called some urgent news. “Breaking tonight,” she said, “FBI Director James Comey delivering a dark assessment of our fight against terror, saying a win against ISIS overseas could cause the terrorists to come west.” However, the remarks from Comey the network then played instead of Khan’s speech were not new, they were made, and widely reported on, on Wednesday morning, 36 hours earlier.

In 2007, when Clinton was forced to explain her vote on Iraq during a primary battle with Barack Obama — who had spoken out against the “dumb war” as an Illinois state legislator in October, 2002 — she initially blamed the faulty intelligence presented to senators. “Obviously, if we knew then what we know now, there wouldn’t have been a vote — and I certainly wouldn’t have voted that way,” she told NBC News.

“I should have stated my regret sooner and in the plainest, most direct language possible,” Clinton reflected later, in her 2014 memoir, “Hard Choices.” She added: “I thought I had acted in good faith and made the best decision I could with the information I had. And I wasn’t alone in getting it wrong. But I still got it wrong. Plain and simple.”

In December, after Trump responded to the mass shooting in San Bernardino by demanding “a total and complete shutdown of Muslims entering the United States until our country’s representatives can figure out what the hell is going on,” Clinton’s campaign released video of her praising the heroism of Capt. Khan.

Amid an outpouring of support and praise for Khan’s speech, a rare sour note was struck by the Trump-supporting extremist Ann Coulter. Jerry Saltz, a New York magazine writer, advised her to look at a photograph of Capt. Khan’s grave in Arlington National Cemetery.