The government has reached an agreement with the family of Giovanni Lo Porto, an Italian aid worker who died in a botched attack in Pakistan last year. The U.S. government has reached an agreement with the family of an Italian aid worker killed in a CIA drone strike in Pakistan, over a year after President Barack Obama acknowledged the operation and promised an investigation and compensation. The news comes as other victims of U.S. counterterrorism strikes are pushing for the administration to also acknowledge their cases under a new executive order signed by Obama this month.

Lawyers for the family of the slain aid worker, 37-year-old Giovanni Lo Porto, confirmed to The Intercept that the U.S. government had provided a payment, but would not disclose the dollar amount, in keeping with the family’s wishes.

In January 2015, a missile fired by a CIA drone struck an al Qaeda compound in Pakistan where Lo Porto and an American humanitarian worker, Warren Weinstein, were being held hostage. A few months later, Obama, in an unprecedented admission, took “full responsibility” for Lo Porto’s and Weinstein’s deaths. Despite hundreds of hours of surveillance, he said, the United States had not known that the hostages were present.

Despite the president’s personal pledge, resolution for the families has been slow in coming.

As The Intercept reported earlier this year, Lo Porto’s family heard nothing from the U.S. government, either directly or through the Italian authorities, for more than a year after the strike took place. Negotiations began after the family went public in March with their frustrations.

The final settlement, reached this week, comes in the form of an “ex gratia” payment — essentially a gesture of condolence — from the U.S. government to Lo Porto’s parents and brothers, who live in Italy. There is no admission of wrongdoing, and it leaves the family free to pursue other legal action in the future. The government also did not disclose any further details about the strike. 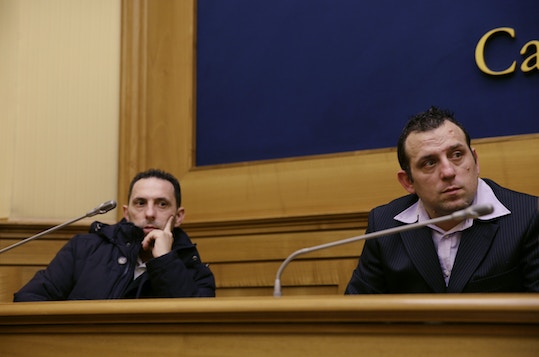 Daniele, right, and Giuseppe Lo Porto, brothers of Giovanni Lo Porto, during a press conference in Rome in March 2016.

An Italian state prosecutor could still, in theory, bring charges related to the strike, although so far there has been little progress on that front, according to Giulia Borgna, an attorney with the Italian firm representing the Lo Porto family. If the prosecutor dismisses the case, she said, it would be up to the family to decide if they would pursue other legal avenues.

It is not clear whether the Weinstein family has also reached an arrangement with the government. A lawyer who has represented the Weinsteins did not respond to requests for comment; in February, he accused the administration of stonewalling negotiations.

The White House did not respond to questions about the settlements, or about the status of a review of the incident by the CIA’s Inspector General. A spokesperson for the National Security Council, Ned Price, said that the offer of a condolence payment was made “knowing that no dollar figure could ever bring back their loved one.”

Originally from Palermo, Sicily, Lo Porto had worked in disaster zones around the world, from Haiti to Myanmar. In early 2012, he had just arrived in Pakistan for a job rebuilding flood-damaged areas when an unknown group kidnapped him along with a German colleague. While the colleague was eventually released, Lo Porto ended up held by al Qaeda militants along with Weinstein, who had been snatched in 2011. Lo Porto’s brother Daniele told The Intercept that Italian authorities informed the family that they were in negotiations with intermediaries to free Giovanni just weeks before he was killed. The family learned of his death on the same day last April that Obama went public with the news.

A Precedent for Disclosure

Lo Porto’s and Weinstein’s deaths were unusual for the frank admission from the White House, in contrast to its silence on other strikes that killed innocent people — most of them non-Westerners. The United States has reportedly made payments for some other drone strike casualties but has not publicly acknowledged them.

Naureen Shah, director of Amnesty International’s Security with Human Rights program, said she welcomed the recognition for Lo Porto, but wished that the response would be extended to others as well. “It’s that particular invisibility of people who live in the communities where these drone strikes occur,” she said. “Their death is considered unsurprising and inconsequential. That goes against everything that we believe in the universality of human rights.”

Earlier this month, the White House released its own drone casualty figures, asserting that U.S. strikes in Yemen, Pakistan, Somalia, and Libya had killed between 64 and 116 civilians, and 2,372 and 2,581 combatants, in 473 strikes over the first seven years of the Obama administration.

Those numbers were roundly disputed by outside observers. Over the years, several groups have maintained tallies of deaths by drone strike compiled from media reports and on-the-ground investigations by human rights groups, and they have estimated between 200 and 1,000 civilian deaths.

The government’s report did not enumerate the strikes, give their locations, name the victims, or even break out the numbers year by year.  The report acknowledged the discrepancies between its numbers and other counts, but argued that the government has access to sensitive intelligence that researchers and the media do not.

The strike that killed Lo Porto provides a clear instance where such intelligence was fallible, however. That attack was what’s known as a “signature strike,” where the agency fires on people exhibiting suspect behavior without necessarily knowing their identity.

It has also not always been clear how the government categorizes casualties; statements by officials and documents published by The Intercept suggested that there was a presumption that all military-aged men killed in a strike were combatants (the White House denies that this is the case).

Along with the casualty count, Obama issued an executive order requiring agencies engaged in armed conflict or “in the exercise of the Nation’s inherent right of self-defense” to take measures to avoid civilian casualties; to investigate instances of civilian harm, taking into consideration outside reporting; and in cases where the United States was responsible, to acknowledge and provide compensation for civilian victims.

This week, Amnesty International sent a letter to the CIA’s general counsel invoking the executive order to ask the agency to respond to a 2012 strike that killed Mamana Bibi, an elderly Pakistani woman. In an op-ed published in Time this week, her son described his children witnessing the bombing and wrote that “No U.S. official has ever acknowledged what happened to my mother, or apologized to us. We are still waiting for justice.”

Amnesty’s Naureen Shah told The Intercept that she believes the executive order should apply to past incidents as well, and could be a powerful accountability tool — if the agency complies with it.

The CIA’s drone strikes, while widely acknowledged, are still covert and operate under greater secrecy than those run by the military: The Pentagon has recently begun announcing its strikes in Yemen in press releases.

“The trick for us is ensuring this isn’t aspirational, but that it actually requires agencies to take action,” Shah said. “It has to become a meaningful piece of paper.”

The CIA referred a request for comment on Amnesty’s letter to the National Security Council. The council spokesperson, Ned Price, said that the White House “will not address specific operations,” but that the executive order “emphasizes the U.S. government’s consideration of credible information from nongovernmental organizations in post-strike reviews.”

“Our focus is on the unprecedented provision of aggregate data regarding these sensitive operations, as well as the unprecedented commitment to continue providing such information going forward, rather than on any particular strikes,” Price said in emailed statement.