U.S. Says New Bombing Campaign Against ISIS in Libya Has No “End Point at This Particular Moment”

The campaign is a significant escalation in the U.S. war against ISIS. Like the others, it took place without congressional authorization or even debate. 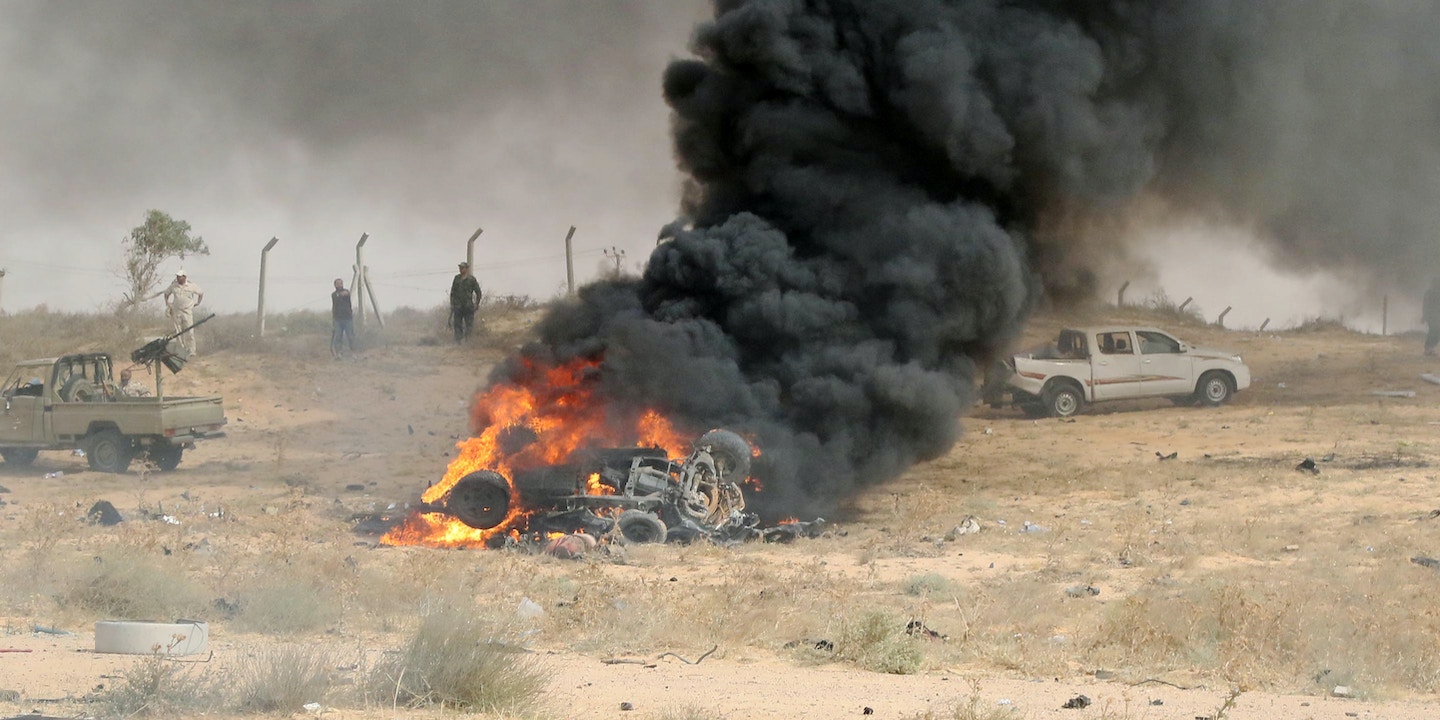 The U.S. launched a major new military campaign against ISIS on Monday when U.S. planes bombed targets in Libya, responding to requests from the U.N.-backed Libyan government. Strikes took place in the coastal town of Sirte, which ISIS took in June of last year.

The strikes represent a significant escalation in the U.S. war against ISIS, spreading the conflict thousands of miles from the warzones in Syria and Iraq.

All of these attacks took place without congressional authorization or even debate.

“We want to strike at ISIL anywhere it raises its head,” said Pentagon press secretary Peter Cook. “Libya is one of those places.” He said the airstrikes “would continue as long as [the Libyan government] is requesting them,” and that they do not have “an end point at this particular moment in time.”

The U.S. has long planned to spread its military campaign to Libya. In January, Gen. Joseph Dunford, the chairman of the Joint Chiefs of Staff, told reporters that the U.S. was preparing to take “decisive military action against ISIL” in Libya.

Intercept co-founding editor Glenn Greenwald responded with a post headlined “The U.S. Intervention in Libya Was Such a Smashing Success That a Sequel Is Coming.”

The New York Times editorial board called the plan “deeply troubling” and said it represented a “significant progression of a war that could easily spread to other countries on the continent.”

The Times supported the U.S.’s initial intervention in Libya in 2011, when the U.S. led a NATO air campaign to oust longtime Libyan dictator Muammar Gaddafi. But after a mob raped and murdered Gaddafi, the country plunged into years of anarchy and militia rule.

President Obama would later call his failure to plan for Gaddafi’s removal his “worst mistake,” and thousands of ISIS fighters have since gained a significant foothold in the country.

At the Pentagon press briefing on Monday, when Nancy Youssef of the Daily Beast asked Cook if the war was legal, Cook responded by citing a controversial 15-year-old congressional Authorization for Use of Military Force resolution passed in the wake of 9/11.

The AUMF resolution authorizes military force against organizations that “planned, authorized, committed, or aided the terrorist attacks that occurred on September 11, 2001.” But the resolution has been invoked, first by George W. Bush and then by Barack Obama, to justify military action in Iraq, Yemen, Somalia, Syria, and numerous other countries.

The administration has argued that the 2001 AUMF applies to the war against ISIS, even though ISIS and al Qaeda are sworn enemies. Several members of Congress, including Hillary Clinton’s running mate Sen. Tim Kaine, D-Va., have argued that the administration should seek congressional authorization to continue its war against ISIS. Such authorizations for the conflict have failed to gain traction in a divided Congress.

Even without the AUMF, it’s unlikely that the White House would have acknowledged any legal barrier to bombing Libya. In 2011, the U.S. continued its Libyan campaign even after Congress rejected a resolution to authorize it. The White House even delivered a report to Congress that argued that the U.S.-led bombing campaign did not count as “hostilities” under the War Powers Resolution. That resolution limits unauthorized conflicts to 180 days.

While emphasizing that the U.S. is “prepared to carry out more airstrikes,” Cook could not confirm basic details about Monday’s operation. When Cook was asked if he had a “ballpark figure” of casualties from the airstrikes, he responded, “I don’t.”

In the past year, the U.S. has also conducted a handful of individual military strikes against ISIS targets in Libya. In February, the U.S. carried out an attack near the coastal city of Sabratha, aiming to take out ISIS operative Noureddine Chouchane. Cook described the attack as “very successful,” but a day later, the Serbian government announced that two kidnapped members of the Serbian diplomatic staff had died in the bombing.

Top photo: Forces loyal to Libya’s unity government gather at the site of a car-bomb attack carried out by ISIS in Sirte on June 2, 2016.