Mahin Khan had serious mental health and developmental issues that the FBI was aware of, family members say. The case against him involves the use of a government informant. An 18-year-old recently arrested on terrorism charges in Arizona has the mental capacity of a child and had been in regular contact with the FBI for years before his arrest, according to family members, former teachers, and medical documents reviewed by The Intercept. Mahin Khan was arrested July 1 on charges of plotting to support the Taliban as well as the militant group the Islamic State and commit acts of terrorism in the local community.

People close to Khan say he had serious mental health and developmental issues and the FBI was aware of this, having met with him regularly since he was a young teenager. According to medical records and statements from family members, he was first referred to the FBI after sending a threatening email to one of his teachers at the age of 15. After an initial meeting with the FBI, he spent 45 days at an inpatient psychiatric facility for evaluation. His family says this stay at the facility was coordinated with FBI officials. Agents reportedly continued to meet with Khan regularly after he returned home and continued to do so up until the time of his arrest.

A community activist told The Intercept that after Khan’s initial contact with the FBI, he began regularly meeting with the teenager in an attempt to mentor him. He said that during these meetings, Khan had exhibited obvious signs of mental illness. “He was unable to even tie his shoelaces and his mother would have to do it for him. He would say things supporting extremism and terrorist groups but then would later start crying and apologizing,” the activist said. The activist did not want to be named for fear of retribution from law enforcement.

His statement echoed those made by a former tutor of Khan’s in an interview with local Arizona media, in which the tutor said Khan had “the mentality of a 6-year-old” and he had told Khan’s mother that there was no point in having him tutored as he was “unable to learn anything.”

In a statement released to local media shortly after Khan’s arrest, his family said he was developmentally delayed and suggested that he had autism. The statement also mentioned that “three years ago, Mahin went through an extensive inpatient psychiatric evaluation under the directive and supervision of the FBI. The evaluation documented the extent and severity of his mental health.”

Medical documents reviewed by The Intercept seem to confirm that Khan had cognitive impairments. A developmental evaluation conducted by psychologists last year found that Khan “requires considerable support from parents to complete day-to-day skills.” It also said that he had been adversely impacted by the loss of his older brother, who died after suffering cardiac arrest a year earlier.

Another document released by his former therapist’s office stated that doctors observed Khan, “acts younger than his stated age,” adding that his “concept formation and mental processing also lack maturity and forethought.”

His parents say that the FBI routinely visited Khan since he was first referred to the agency at the age of 15. During these visits, which occurred every few months, no lawyer was present, as Khan’s family assumed the FBI had been meeting to “help him.”

The FBI declined to comment as the case is still pending. The Arizona Attorney General’s Office did not respond to requests for comment. 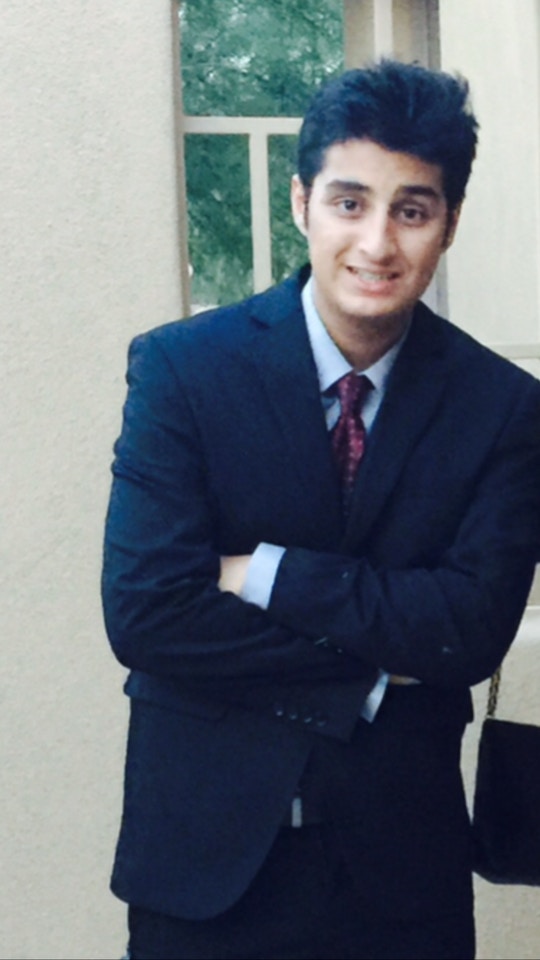 An undated photo of Khan provided by his family.

A judge denied Khan bond at a July 20 hearing. He now faces the prospect of several decades in prison on a number of charges, including conspiracy to commit terrorism and conspiracy to commit misconduct involving weapons. In contrast to the vast majority of terrorism cases in the U.S., Khan’s case is being tried at the state level.

At an initial hearing, a Joint Terrorism Task Force agent reportedly confirmed that authorities had provided Khan with a prepaid cellphone so that he could communicate with a government informant. In the course of his conversations with that informant, Khan is alleged to have indicated his willingness to kill hundreds of people, while also musing about attacking a local motor vehicle registration office or a Jewish community center.

But due to the level of Khan’s psychological impairment, it is questionable whether he was actually capable of acting on any of these statements. His documented history of mental illness and young age (he was legally a minor when the investigation against him started) suggest he may have been more well suited to psychiatric treatment than an elaborate sting operation. The national headlines trumpeting the case as a thwarted instance of homegrown terrorism seem to diverge from the reality of Khan’s reduced mental circumstances.

“Mahin is 18, but mentally he is like a child,” his father, Atif Khan, said. “He doesn’t even have a driver’s license because he can’t pass his test, he can’t even tie his shoes or take care of himself in the most basic ways. We didn’t let him have a phone because we didn’t trust him with one, but now we have found out that he had been using a phone given to him by the FBI.”

Court documents indicate the formal investigation began as early as February of this year. On June 18, Khan turned 18 and was arrested shortly afterward. “They waited until two weeks after his 18th birthday to arrest him, but even now he doesn’t understand the gravity of the things going on around him,” his father said.

Had authorities arrested him beforehand, Khan would have potentially faced less punitive legal consequences as a minor. Shortly after he was taken into custody, Khan was assaulted by other inmates in the local jail. He has since been placed in segregated confinement.

In addition to the impact on Khan’s own life, activists in Khan’s local community who spoke to The Intercept expressed frustration that the FBI’s informant had discussed with Khan a plot to attack a Jewish center, leading to sensational news headlines that have strained interfaith ties they had been working to build. A story on recent terrorism convictions by AlterNet accused the FBI of “stoking divisions” among Muslim and Jewish communities in the course of some of its informant-directed investigations.

“The FBI knew all along that he was not a real threat on his own,” Khan’s father said, adding that the government had allowed him to board a flight to Minnesota to see family members during the same period he had been conversing with its informant.

“They were meeting with us and saying they were there to help him, but meanwhile they were trying to trap him at the same time,” Khan’s father said.