Black Lives Movement Answers the Question: What Are Your Demands?

“A Vision for Black Lives” is at once an exhaustive indictment of the nation’s systemic racism and a clear-eyed presentation of concrete solutions. 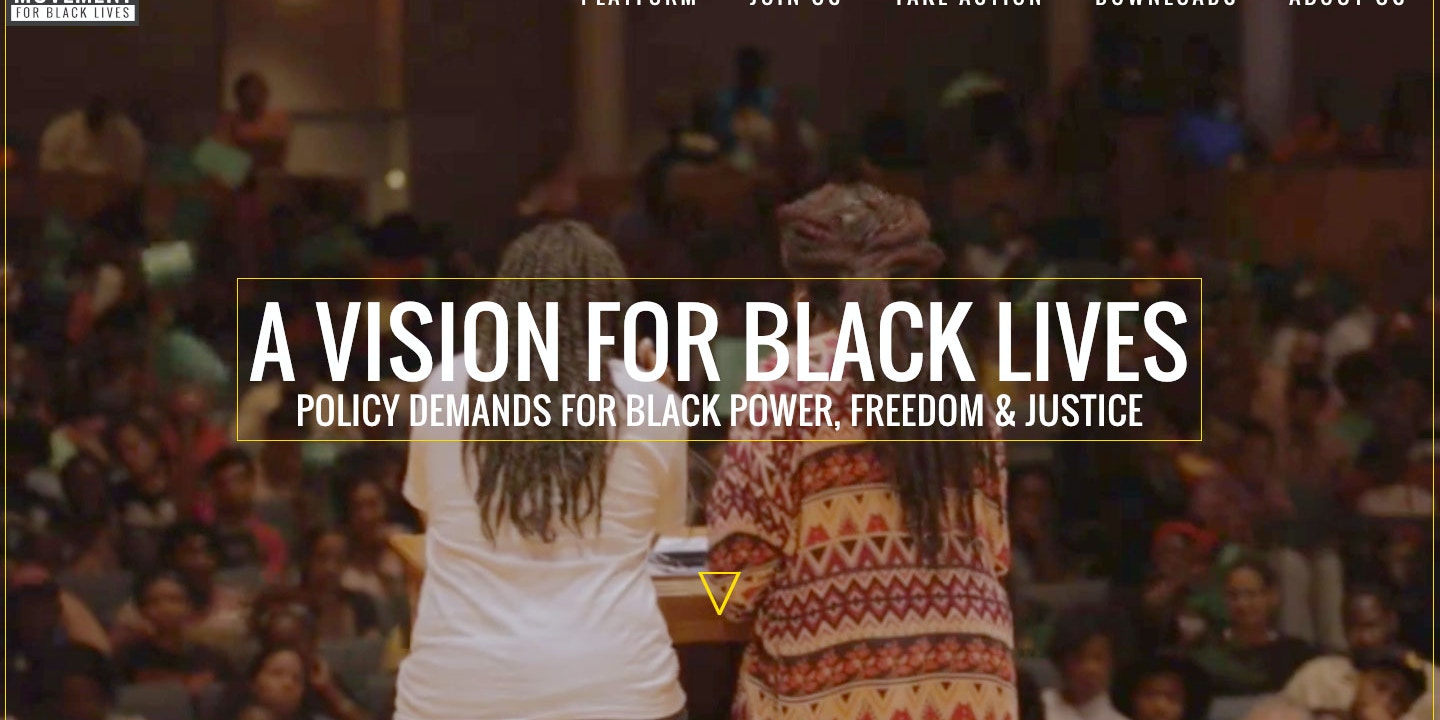 In the midst of an election year in which issues of race and policing have often taken center stage, the most comprehensive and detailed policy platform on how to tackle them has come not from candidates or elected officials, but from a movement that found its voice on the streets of Ferguson, Baltimore, and dozens of other cities.

The Black Lives Matter movement erupted spontaneously in nationwide protests following the 2014 police killing of Michael Brown in Ferguson, Missouri. In its early days, it was propelled by pain and rage, with little organization, but in the weeks and months that followed it grew coordinated and strategic, while never losing the horizontal, inclusive quality that allowed it to scale up so rapidly.

As community organizations and individuals operating under the Black Lives Matter principle denounced police violence, racism, and lack of accountability, they also took on broader issues affecting black communities: mass incarceration, access to clean water, economic justice. While the number of mostly black and brown people killed by police continued to grow, street protests have been sporadic. But away from the spotlight, a movement that made its name by way of protest continued to organize, and this week released a comprehensive policy platform, “A Vision for Black Lives,” that is at once an exhaustive indictment of the nation’s systemic racism and a clear-eyed presentation of concrete solutions to the problem.

The platform, which the authors called “an articulation of our collective aspirations,” was developed on the premise that “the U.S. is a country that does not support, protect or preserve Black life.” “Neither our grievances nor our solutions are limited to the police killing of our people,” reads the introduction, which goes on to discuss underinvestment in black communities, failing schools, the exploitation of black labor, and a host of deep-seated systemic issues. 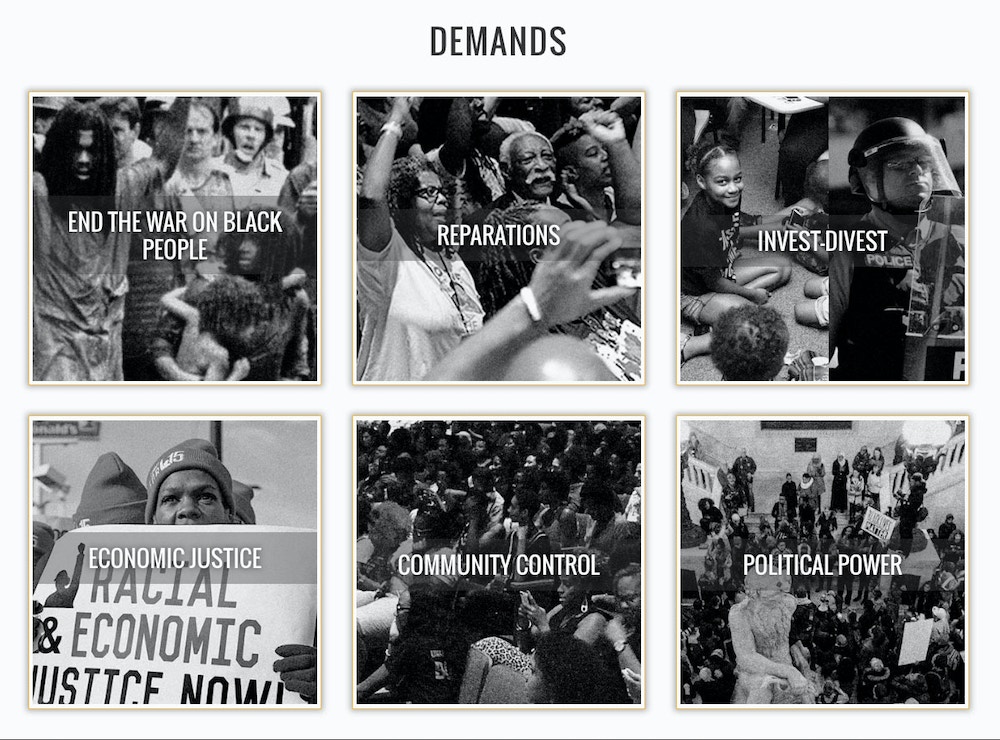 Source: The Movement for Black Lives

But the point of the platform is not to overwhelm with the magnitude of the country’s racial injustice — it’s to offer solutions. The text is broad and ambitious, calling for reparations for slavery and subsequent harm inflicted on black people and divestment from prisons and police, but also rich on details of specific policy solutions at the local, state, and federal level, and examples of places where the work has already started.

The document focuses on six key areas — political power, community control, economic justice, investment and divestment, reparations, and an end to the war on black people — and includes a long list of tangible goals such as ending the death penalty, the money bail system, felon disenfranchisement, deportations, and the privatization of police and prisons. Each section lists statistics, resource tools, model legislation, and groups already working on a specific issue.

The broad call for radical change coupled with a detailed list of concrete objectives is “a recognition of how things change,” said Rashad Robinson, executive director of Color of Change, one of the groups behind the platform. “It’s important to have a movement that can be operationalized into policy. It’s always been more than a protest movement.”

Released on the heels of the Republican and Democratic national conventions, which referenced tensions between communities of color and law enforcement but offered little in terms of solutions, Robinson said the document was intended as a reminder that “it’s not about politicians putting out their platforms and hoping that we get behind them, but it’s about political leaders recognizing what the communities want.”

The movement for black lives coalition chooses not to endorse any political candidates at the federal or local level — but the authors of the platform hope politicians will read it, and some expressed frustration that the national conversation on race and police has largely missed the point.

“Neither the RNC nor the DNC had specific policy language in their platforms that addressed the things that we talk about; they address surface issues while we look to address the root causes of the issues,” said Brown. “It’s not about reform. Reform is putting a Band-Aid on and hope it heals. We want transformation, to provide a new arm.”

“Policy is not the whole picture, but it’s a place to start,” she added. “It’s a way to engage politicians and say, if you really think black lives matter, then why would it be so hard for you to put these policies in place?”

While “A Vision for Black Lives” is grounded in the experience of black Americans, its scope includes a number of marginalized groups and gives a nod to global problems. The authors emphasize that the platform remains a work in progress. They hope items will be crossed off as legislation passes and battles are won, but they also want it to be expanded as more people join the movement and campaign around specific issues. On Tuesday, the authors of the platform held a Twitter “town hall” to discuss implementation; more organizing calls, open to all, are scheduled for the coming weeks. And while the platform offers the consensus of groups working for a shared vision, with sometimes differing focus and tactics, it is also meant as a starting point for pursuing tangible goals.

On Wednesday, for instance, Color of Change and a number of other organizations will present the Department of Justice with a petition signed by more than 500,000 people calling for charges against the officers who last month killed Alton Sterling in Louisiana and Philando Castile in Minnesota, and for the defunding of police departments that reject reforms.

“The issue of policing is on the agenda and it’s on the national conversation, but building the type of power that forces decision-makers to do something about it is critical,” said Robinson. “Conversation and dialogue and all these things are important, but most importantly, right now we need action.”