The document shows how targeting authority is concentrated at the White House. 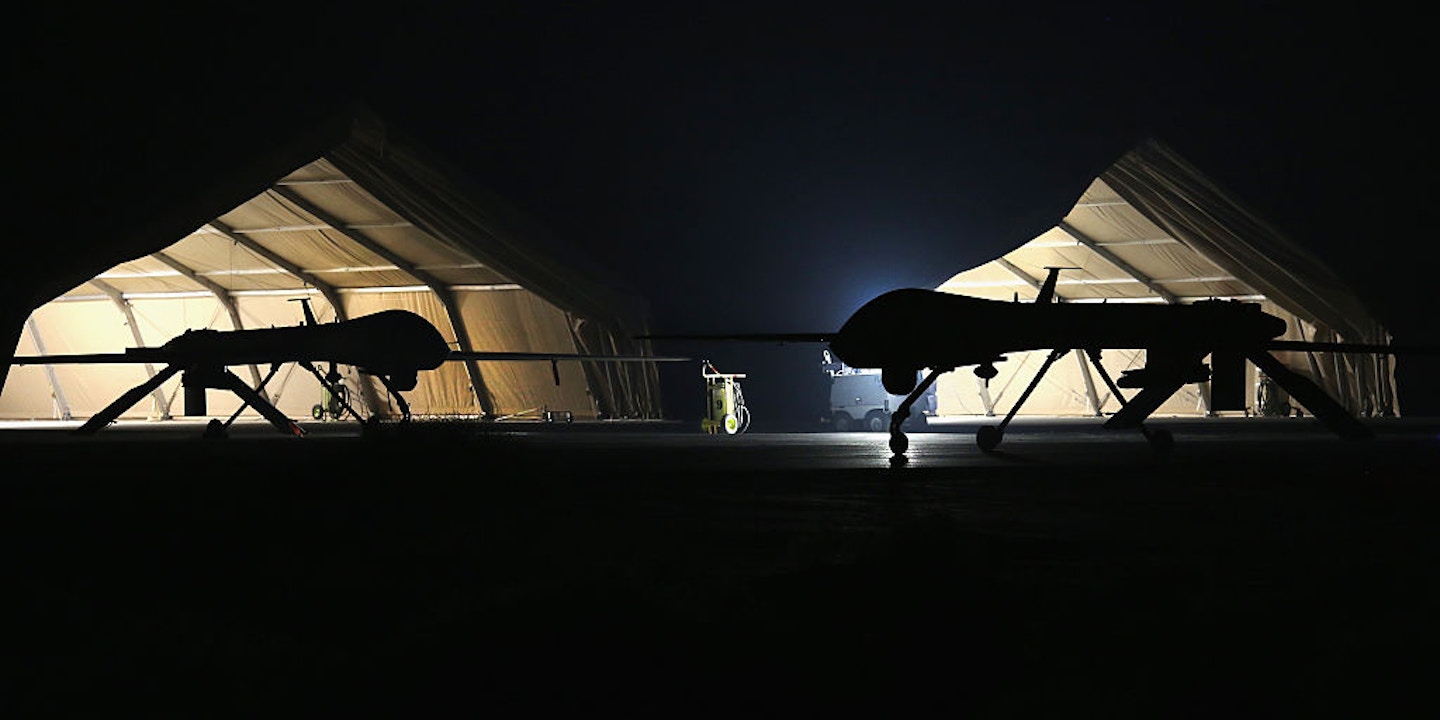 The Obama administration has released its internal guidelines for how it decides to kill or capture alleged terrorists around the globe, three years after they came into effect. They provide a look at the drone war bureaucracy behind hundreds of strikes in Yemen, Pakistan, Somalia and elsewhere, a system President Obama will hand off to his successor.

The guidelines show the process is concentrated at the White House, specifically in the National Security Council. They also describe the process for approving so-called signature strikes, where the target of the strike is not a known “high value terrorist,” but rather some other “terrorist target,” which could be a group of people exhibiting suspect behavior, or a vehicle, building or other infrastructure.

Amid all these procedural details, however,  the presidential policy guidance, or “playbook,” as it has been called, does not provide new insight into when, where, and under what authorities someone can be killed, or what kind of intelligence is necessary to make that decision.

Much of the document, which is dated May 22, 2013, echoes public statements by administration officials over the past several years and previously-released material. The general standards for killing terrorist targets away from active battlefields were made public that May, when the president gave a speech and issued an abbreviated version of the guidance, promising that the United States would only undertake lethal action against a terrorist if they posed a continuing, imminent threat to U.S. persons, and if capture was not feasible.

It took a lawsuit by the American Civil Liberties Union to get the full 18-page version of the guidance declassified, with some redactions.

“This document doesn’t tell us anything new about the substantive standards that they use to determine if someone can be targeted,” said Jameel Jaffer, deputy legal director of the ACLU. “We’d hope that they’d fill out what they mean by ‘continuing’ and ‘imminent,’ or ‘feasible’ or ‘unfeasible.’”

In a statement, the ACLU also questioned how the document’s “relatively stringent standards can be reconciled with the accounts of eye witnesses, journalists, and human rights researches who have documented large numbers of bystander casualties” from drone strikes.

The People Who Approve “Direct Actions”

According to the guidance, each operating agency – the CIA or the Defense Department – prepares “operational plans for taking direct actions,” whether strikes or captures, in different situations. Those plans undergo a legal review by the agencies’ general counsels and a legal adviser to the National Security Council, and then are considered by a circle of advisers at the White House known as the Principals and Principals’ Deputies Committees, made up of the heads or deputy heads of the Departments of State, Defense, Justice, and Homeland Security, as well as the CIA, Joint Chiefs of Staff, and the National Counterterrorism Center.

The plans must include legal, tactical and policy rationale for undertaking the strike, what kind of “strike and surveillance assets” would be used, and how long the authority to take action would remain in place. Once the committee arrives at its decision on the plan, it is communicated to the president for his final approval.

The guidance indicates that the president does not have to sign off on individual names of high-value targets to be killed, unless there is disagreement within the National Security Council. If the individual is a U.S. person, the Justice Department needs to weigh in.

If an agency wants to nominate an individual to be killed, they make a profile of them based on intelligence reporting, which is reviewed by an interagency panel led by the White House counterterrorism adviser, currently Lisa Monaco. Again, the profile passes through lawyers at the agency and at the National Security Council before going to the Deputies Committee and ultimately the Principals Committee for a final decision.

Although the process indicates a high degree of control in the White House, generally speaking, the actual operation is still carried out under the command of the military or CIA.

A similar process is followed for approving plans for strikes against “terrorist targets other than high-value terrorists.” The section seems to address “signature strikes,” in which the United States has attacked people without knowing their identity. The examples given in the policy guidance include vehicles carrying improvised explosive devices, or “infrastructure, including explosives storage facilities.” For an actual strike, it appears from the guidance that the Principals Committee and the president get involved only when there is disagreement about the operation.

If the suspect is to be captured, a rare occurrence under Obama, the president also approves the plan. Among the various considerations going into a decision to capture someone, such as how and where they would be detained and interrogated, and if they could be tried in civilian court or military commission, one thing is spelled out clearly: “In no event will detainees be brought to the detention facilities at the Guantanamo Bay Naval Base.”

The process laid out in the guidance is more detailed but does not differ substantially from the one described in a 2013 Defense Department Power Point presentation published by The Intercept last fall, although that document included additional information on how the military carried out its strikes in Yemen and Somalia at the time. For instance, the presentation included the detail that once a target was approved by the White House, the military had a 60-day window to pursue the operation.

“Associated Forces” and Other Limits

The newly-issued guidance does not specify how long authorities for given operations last, although it mentions that the case against individuals on the list for lethal strikes must be reviewed each year. It also notes that if “a capture option” becomes possible at any point, there should be an expedited reevaluation of the authority to kill them.

The Defense Department also released two heavily redacted documents describing its implementation of the policy guidance, along with a letter to the Senate from 2014, stating that the Pentagon considers the Taliban, the Haqqani Network, and other groups fighting alongside them against U.S. forces in Afghanistan to be “associated forces” of Al Qaeda, along with Al Qaeda in the Arabian Peninsula, which operates in Yemen. Some portions of the list of associated forces and all the groups considered “affiliates” of Al Qaeda are blacked out.

Associated forces would fall under the 2001 Authorization for Use of Military Force, which became law just a week after 9/11, and which the administration has used to justify 15 years of lethal operations in many countries. Yet the White House process, the Pentagon document notes, involves a “target-by-target analysis” of legal authorities, and groups not currently identified as associated forces could still be targeted if a new situation arose. The guidance also includes a large waiver for the president to disregard it in cases of “national self-defense,” “fleeting opportunities,” or even to authorize a strike against someone who posed a threat “to another country’s persons.”

The guidance does not apply to operations in “areas of active hostilities,” which the administration currently defines as Iraq, Syria, and Afghanistan. A White House spokesman, Ned Price, pushed back on reports that strikes in the Federally Administered Tribal Areas of Pakistan, along the border, are not covered by the guidance, but would not clarify whether in some instances strikes in the border region might fall into the administration’s definition of active hostilities.

The guidance is one more exhibit in the Obama administration’s institutionalization of counterterrorism strikes, by drones and other means, far from conventional battlefields. Last month, the White House released casualty figures for such strikes during Obama’s presidency, stating that as many as 2,600 people had been killed in 473 strikes in 7 years. The administration believed that between 64 and 116 of them were civilians – a number disputed by outside observers, who put the total number of civilians harmed between 200 and 1000.

Even as the frequency of drone strikes, especially by the CIA, has declined markedly in the last years of Obama’s presidency, the practice has not ended. The U.S. military hit a Taliban leader in a strike in Pakistan in May, also killing a taxi driver. Strikes in Yemen have been more frequent, and there were two massive attacks in Yemen and Somalia in March killed dozens of alleged fighters.