Pentagon announces an additional $1.15 billion in weapons sales to Saudi Arabia this week, even as Saudi-led coalition resumes its brutal bombing campaign. 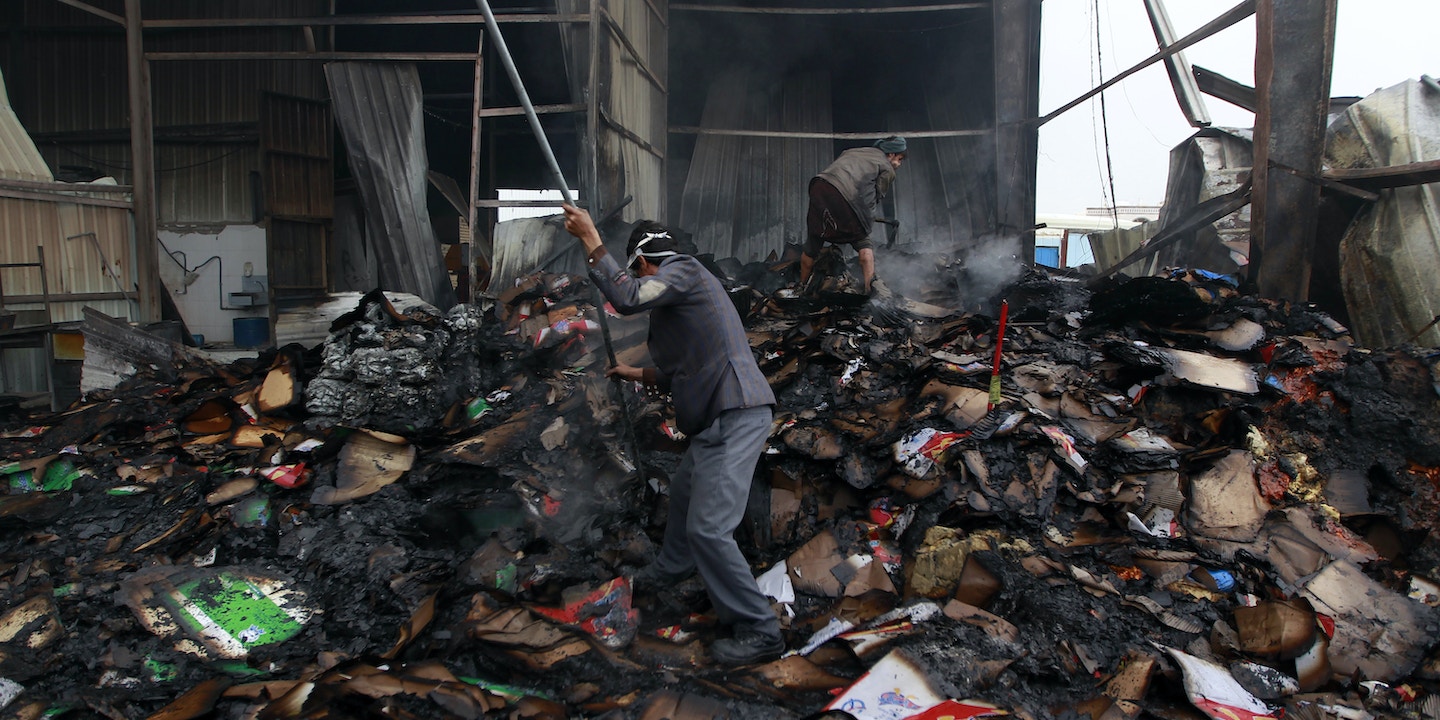 The Pentagon announced an additional $1.15 billion in weapons sales to Saudi Arabia this week, even as a three-month cease-fire collapsed and the Saudi-led coalition resumed its brutal bombing campaign of the Yemen capital Sana.

The U.S. has already sold more than $20 billion in weapons to Saudi Arabia since the war began in March 2015, defying calls from Human Rights Watch and Amnesty International to cut off support. The Saudi-led coalition is responsible for the majority of the 7,000 deaths in the conflict, which has left more than 21 million people in need of urgent humanitarian assistance. Saudi Arabia has been accused of intentionally targeting homes, factories, schools, markets, and hospitals.

On Tuesday, the coalition targeted and destroyed a potato chip factory, killing 14 people (see top photo). The Yemeni press has since reported that coalition has conducted hundreds more airstrikes across the country, killing dozens of people.

Tuesday’s bombing comes after months of negotiations failed to reach a peace deal between Saudi Arabia, the Houthis, and Yemen’s exiled government. Both the Saudi regime and exiled Yemeni government were quick to place blame on the Houthi rebels, who rejected a U.N.-brokered peace deal.

But the deal was not an even-handed compromise. Middle East Eye reported that the deal was “broadly in line” with what Saudi Arabia wanted — it would return control of Yemen to Hadi, and require the Houthis to turn over their weapons and leave the capital.

The deal would have given Saudi Arabia what it wanted from the start: disarming the Houthis, removing them from power, and installing its preferred ruler. The Houthis rejected the deal, calling the proposal a “media stunt.”

Adam Barron, a Yemen analyst and fellow with the European Council on Foreign Relations, echoed that assessment, and told The Intercept that the deal was not a serious attempt to work out a compromise. “You’d have to look far and wide to find someone familiar with Yemen who would think the Houthis would accept that deal,” he said.

Previous negotiations have floated the idea of forming a unity government — composed of Houthi and former Hadi government leaders. But the exiled Hadi leaders have consistently rejected any deal that would diminish their power over Yemen, and the Houthis have said that they will reject any deal that does not give them a seat at the table.

The State Department has repeatedly stressed that the United States “strongly encourages” peace talks to continue, but it is unclear whether the U.S. would welcome a compromise solution.

Shortly after the bombing campaign began, the U.N. Security Council in April 2015 passed a resolution at the request of Saudi Arabia and with the support of the United States, urging that Saudi Arabia’s demands be met in full. The resolution placed an arms embargo on the Houthis and demanded that they “withdraw forces from the areas they have seized, including the capital, Sana’a.”

The U.N. has since deferred to other Saudi Arabian demands, as well. Earlier this year, after Saudi Arabia was put on the U.N.’s blacklist of child-killers, it threatened to cut off hundreds of millions of dollars in donations to the U.N. The U.N. secretary general removed the country from the list, pending a “joint review” with the coalition, and indicated that their name will remain off the list until that happens.

Top photo: An employee looks through the damage at the Al-Aqel food factory that makes potato chips in Yemen’s rebel-held capital Sana.