New NYPD Commissioner’s Focus on Community Policing Is a Distraction, Not a Solution

James O’Neill, taking over from William Bratton, plans to emphasize meaningless reforms that leave police powers and practices all but unchanged, critics say. When New York Mayor Bill de Blasio introduced incoming Police Commissioner James O’Neill last week, he praised him as the “architect” of neighborhood policing — the city’s version of the “community policing” approach being implemented across the country as a solution to the increasingly contentious relationship between law enforcement and people of color.

“When New Yorkers know their local officers and trust their local officers, we are all safe as a city,” the mayor said following the announcement that Commissioner William Bratton would be resigning. “In times like these, we have a responsibility to provide our nation with a model for respectful and compassionate neighborhood policing. … If we want to keep all New Yorkers safe, policing must be of, and for, and by the people.”

But members of these communities say that knowing their local cops won’t stop them from getting killed by the police. Trust must be earned through accountability, they say, not optics. Advocates for radical change to the country’s policing culture have become increasingly critical of community policing as a meaningless, politically expedient catchphrase that is used to deflect attention from deeper problems within police departments.

The New York Police Department first introduced its Neighborhood Coordination Program in May 2015 — and it’s now expanding the initiative to about half the city’s precincts. O’Neill, who spearheaded the effort, said last week that it aims to establish “closer relationships and mutual understanding.”

“It’s all about our communities personally knowing their local cops, and trusting those cops to help them and their neighbors lead better lives,” O’Neill said.

Community policing has been promoted nationwide, including by President Obama and the Justice Department. But critics say it means nothing when the community remains powerless over policing practices — and that won’t change with more cops walking the beat or handing out ice cream instead of traffic tickets, as officers in Virginia recently did in a widely mocked initiative that, to some, demonstrated the shallowness and tone-deafness of community policing proposals.

“Community policing, as it’s being called, is just smoke and mirrors, and for many of us it’s quite insulting,” Lumumba Bandele, a member of the New York-based Communities United for Police Reform, told The Intercept. “Many of us know the police who are harassing us and brutalizing us. Those relationships don’t save us.”

Bandele’s group has warned against falling for the impression that O’Neill represents a gentler NYPD. Its spokesperson, Anthonine Pierre, said in a statement after O’Neill was chosen that “talk is cheap,” and called for for specific reforms to make police more accountable. 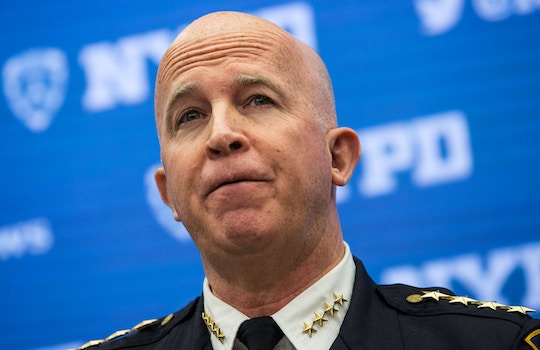 “We’re fed this idea that we need dialogue,”Bandele said. “You don’t go to someone who’s in an abusive relationship and say, ‘We need to have more dialogue.’ No, I want the power to stop my abusers. I want to be able to have the power to prevent it.”

In New York, that has yet to happen.

Last month, for instance, the New York City Council declined to consider a legislative proposal that could have made it mandatory for police officers to identify themselves and explain the reasons for a stop. The proposal, known as the Right to Know Act, was endorsed by some 200 community organizations “as a way to bring transparency and accountability into the most common interactions that people are having with the police,” Bandele said. But in a backroom deal, Council Speaker Melissa Mark-Viverito reached a compromise with the NYPD to adopt some reforms as a matter of department policy rather than law.

The deal was met with anger by police reform groups, which noted that the police chokehold that killed Eric Garner two summers ago was also against the department’s policy. That wasn’t enough to keep officer Daniel Pantaleo from “walking around free as a bird today,” Bandele said.

“We can’t get strong community oversight,” he added. “We can’t get legislation that requires the NYPD to do certain things. All these things that are very clear-cut seem to have a lot of trouble getting through, but people want to talk about community policing as an answer. If they have no reason to fear any repercussions, there is nothing to stop them from continuing to do what they do.”

So far, there is no indication of that change under O’Neill.

“We need to pay very close attention to the accountability mechanisms that are being put in place by the new commissioner,” Michael Sisitzky, policy counsel at the New York Civil Liberties Union, told The Intercept. “If they are truly committed to community policing and improving this relationship, the community’s trust in the police force is diminished every time that an officer is not held accountable for misconduct or abuse of their authority.”

In a statement to The Intercept, a spokesperson for the mayor’s office deflected criticism of the city’s community policing initiative. “From reducing Stop and Frisk and marijuana arrests, to launching neighborhood policing and body cameras, we’ve taken clear steps to strengthen the NYPD’s relationship with the community while keeping New York the safest big city in America,” the spokesperson wrote.

The NYPD did not respond directly to the criticism, instead referring to previous statements about its neighborhood policing initiative. Describing the initiative, the department said the same two officers would be assigned to the same sector each day, and that they would receive mediation training and other resources to address local issues. The department also recently announced that it would add 1,300 officers to the force to implement its program —but eased previous restrictions on the use of Tasers and prepared to train 4,000 officers to carry the stun guns, drawing fears and sarcasm about what the city’s new community policing would look like.

Condemnation of the NYPD’s community policing approach also comes from many who fear it will essentially enable the continuation of one of Bratton’s most criticized legacies: his “broken windows” approach to policing, the aggressive pursuit of so-called “quality of life” offenses that funnel thousands of people into the justice system — and the city’s infamous Rikers jail — every year.

Several community groups working on policing issues in the city welcomed Bratton’s early departure, but cautioned that without serious police reform, his successor would just oversee more of the same.

“We are not sorry to see him go,” said the Police Reform Organizing Project, which is a grassroots group that, among other issues, has been fighting to put an end to arrest “quotas” that the police department continues to deny despite evidence to the contrary. “It is not time, though, to pop the champagne bottles yet.” Others cautioned that the promise of community policing would only serve to distract from practices that without reform will long outlive Bratton’s run at the helm.

“We’re concerned community policing is going to be a term that covers up the continued employment of broken windows policing,” Sisitzky told The Intercept. “What community policing should look like is actually listening to the concerns of New Yorkers and giving them meaningful input into what works in their community and what doesn’t — and what doesn’t work is this continued aggressive enforcement of nonviolent, noncriminal offenses.”

But as community policing spreads across the country as the feel-good, simplistic solution to one of the most troubling manifestations of the country’s structural inequality, so is skepticism about it.

In a 2015 report on Chicago’s version of community policing, known as the Alternative Policing Strategy, the local anti-police violence group We Charge Genocide said that effort, too, “has not resulted in meaningful community control over police.”

Instead, according to the group, community policing enlisted some community leaders and businesses, many already contributing to gentrification and displacement, to deflect criticism and rally support for policing without demanding changes to police practices.