Three new CIA documents obtained by The Intercept show the evolution of secret rules governing what is and is not allowed to be discussed before the military court at Guantánamo. 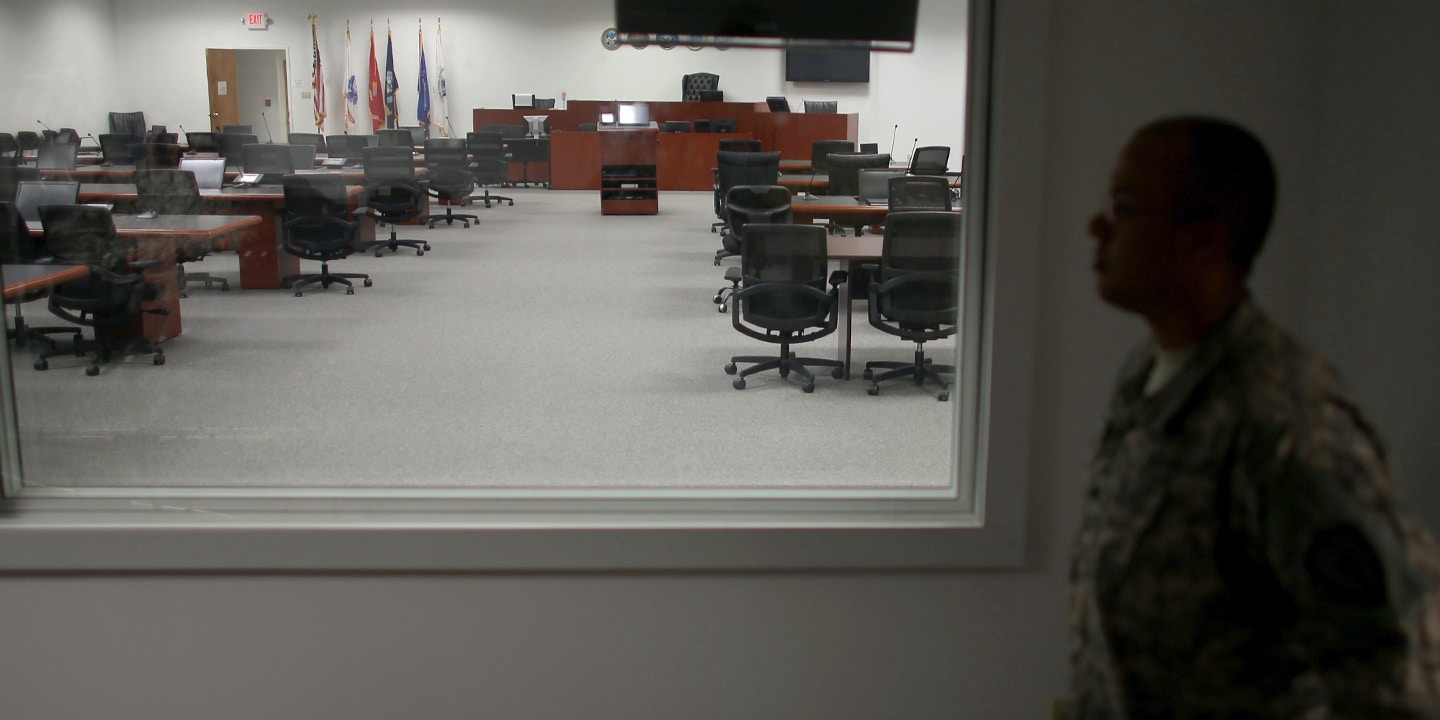 In January 2013, during the military trial of five men accused of plotting the 9/11 attacks, a defense lawyer was discussing a motion relating to the CIA’s black-site program, when a mysterious entity cut the audio feed to the gallery. A red light began to glow and spin. Someone had triggered the courtroom’s censorship system.

The system was believed to be under the control of the judge, Col. James Pohl. In this case, it wasn’t.

“The 40-second delay was initiated, not by me,” Pohl said. He was referring to the delayed audio feed, which normally broadcasts to the press and other observers seated in the gallery. The gallery is cut off from the courtroom by three layers of soundproof Plexiglas. “I’m curious as to why. … If some external body is turning the commission off under their own view of what things ought to be, with no reasonable explanation, then we are going to have a little meeting about who turns that light on or off.”

Later, Pohl said the censorship was the work of an “OCA,” short for “Original Classification Authority.” In the future, he said, no external body would be permitted to unilaterally censor what was happening in his courtroom.

Many have speculated that Pohl’s “OCA” is in fact the CIA. That speculation is now confirmed with the release of three new documents by The Intercept. The documents show the evolution of secret rules governing what is and is not allowed to be discussed before the military court at Guantánamo.

All three of the declassified documents are marked “secret” and were distributed to defense attorneys and Pentagon-employed courtroom security officers. The documents clearly identify CIA as the OCA for torture-related information at the Guantánamo military commission proceedings.

Dean Boyd, who heads the CIA’s public affairs office, referred questions about the January 2013 censorship incident to the Pentagon. Lt. Col. Valerie Henderson, a Pentagon spokesperson, declined to comment. “I don’t have anything to offer you beyond what is written in [the court] transcript,” she said. 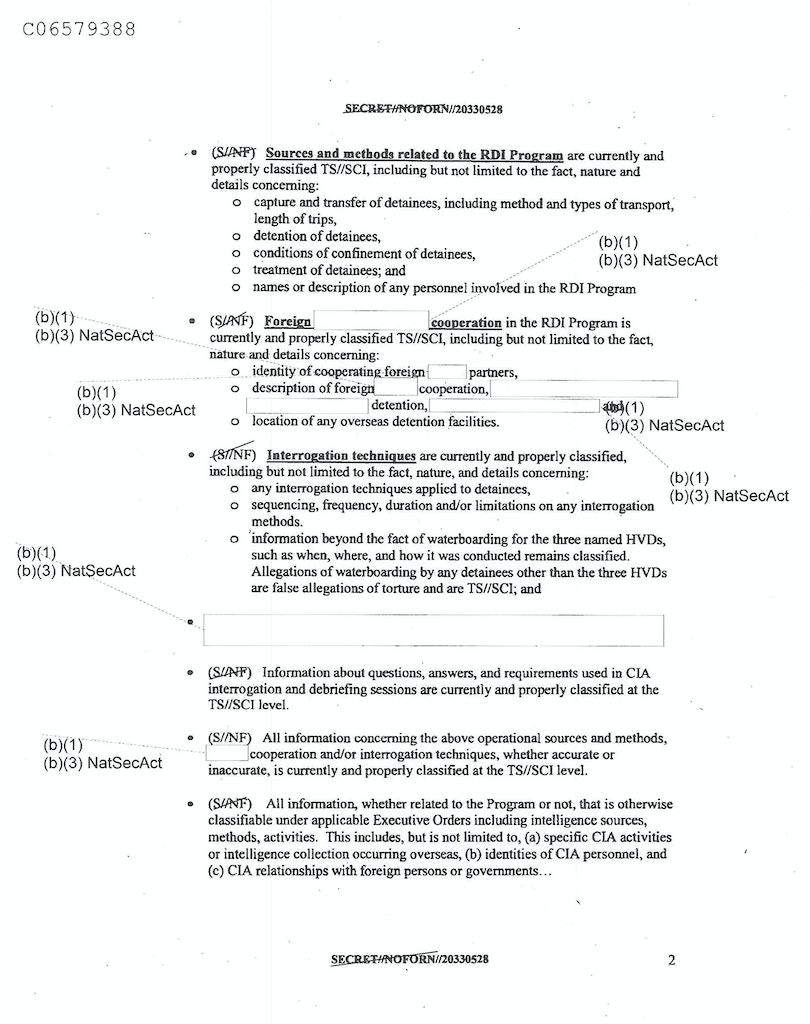 This page from a 2008 CIA guidance document designates as top secret the “treatment of detainees,” their “conditions of confinement,” and certain “false allegations of torture,” which were later shown to have merit.

Another CIA spokesperson confirmed the dates of the guidance, which are not given in two of the three documents.

The first guidance document is from spring of 2008.

The second document is from late spring or early summer of 2009.

The third document is from September 2011.

The Intercept obtained the documents through an ongoing Freedom of Information Act lawsuit against the CIA and other federal agencies. Yale Law School’s Media Freedom and Information Access Clinic is providing legal representation for the request.

The term “OCA” is a placeholder that can refer to multiple agencies, but with respect to the rendition and torture program, Guantánamo observers have assumed for some time that it means the CIA. A defense lawyer asserted the connection in open court, and it has previously been hinted at in several other documents. At the end of January 2013, Judge Pohl issued a ruling declaring that there would be no more outside censorship of the tribunals. “It is the judge that controls the courtroom,” he said.

The courtroom’s internal censorship system, including the Plexiglas and audio delay, continues to this day. But assuming Judge Pohl’s order is enforced, the CIA no longer has the power to decide when to cut the courtroom audio, as it did in January 2013.

“The Department of the Defense runs the courtroom, but CIA owns a lot of the information,” said attorney James Connell III, who is representing Ammar al-Baluchi before the tribunal. Baluchi, whose torture at multiple overseas black sites was depicted in the film Zero Dark Thirty, is one of five men who stand accused of plotting the 9/11 attacks and now face the death penalty.

The CIA calls its classification rules “guidelines … to be applied throughout the legal process.” They are intended to provide the Pentagon-employed court security officers with “general direction about when national security information may be at issue, … triggering the need for protection.”

Much of what the CIA sought to keep out of open court effectively constrained the detainees’ ability to give an account of their own torture at the hands of the CIA and officials from other countries where they were held.

At first, these prohibitions were broad, but they grew narrower over time. The oldest guidance document, from 2008, prohibits talking about “conditions of confinement of detainees” and “treatment of detainees,” although “general allegations of torture are unclassified.” By this time, the CIA had released three of the names of detainees subjected to waterboarding. Though the CIA continues to insist those three were the only ones waterboarded, the claim is tenuous at best. According to the 2008 guidance, no other detainee could talk about waterboarding. Anyone who did, wrote the CIA, was lying, and even the existence of those lies was secret.

“Allegations of waterboarding by any detainees other than the three … are false allegations and are TS//SCI,” the guidance states.

In other words, even the alleged lies of other detainees who claimed to have been waterboarded were designated top secret and “sensitive compartmentalized information,” a higher-level classification than top secret alone. And yet many of these allegations, which the CIA’s guidance kept out of the tribunals for years, were later shown to have merit.

“In effect, the government was making the chilling and breathtaking assertion that it owned and controlled detainees’ memories of torture, whether true or false,” said Ashley Gorski, a staff attorney with the ACLU, who reviewed the newly released guidance documents.

“We stand by the document,” Dean Boyd, director of the CIA’s public affairs office, wrote in an email.

The 2008 guidance identifies CIA’s own “Original Classification Authority” as having the power to declassify statements by detainees. Other officials and agencies likely have some say as well. The 2011 and 2009 guidance say that the president and director of national intelligence can also declassify information related to the torture program; the 2008 guidance suggests that the power was delegated even further.

Seventy-six men are still held at Guantánamo. Sixteen are “forever prisoners,” who have not been charged by the court but are considered too dangerous to be candidates for release. President Obama’s self-imposed deadline to close the prison is more than six years past due.

Initially, the purpose of Guantánamo was to extract useful intelligence from high-level detainees to aid the war on terror. The orders to subject detainees to torture — or what the George W. Bush administration euphemistically called “enhanced interrogation” — came from the White House. It fell to the CIA to carry them out. The agency’s initial intelligence-driven mission got muddled up by other motives — revenge against al Qaeda, the avoidance of political fallout, control over the flow of information to Congress and the public, and later, by the problem of what to do with the detainees themselves.

Today’s legal environment is more open to detainees giving accounts of their own torture, according to Joseph Margulies, an attorney who represents Abu Zubaydah, one of the three men who the CIA admits having waterboarded.

“It is our position that the United States government has confirmed that Abu Zubaydah’s first-person account of his treatment is not classified,” Margulies said. “Therefore he ought to be allowed to disclose it.” As evidence of the shift, he pointed to the release of the Senate torture report summary, accounts of torture taken down by lawyers representing Majid Khan, and filings in Salim v. Mitchell, a lawsuit brought against two psychologists who designed the torture program as contractors for the CIA.

Connell, the attorney representing Ammar al-Baluchi, said that he welcomed the shift toward openness at Guantánamo but that the rules were still too restrictive. “The most important information for accountability is who did what and where they did it. Until that information is declassified, there will never be accountability for the CIA’s torture program.”