The Justice Department Is Done With Private Prisons. Will ICE Drop Them Too?

According to ICE’s numbers, more than 70 percent of its detainees, on average, are living in privately run facilities, where unsafe and abusive conditions have been amply documented. The Justice Department’s announcement on Thursday that it would seek to end the use of private contractors to run its federal prisons was a monumental one that quickly sent private prison stocks plunging and drew praise from dozens of human and civil rights groups that for years had been denouncing abuse and neglect in private facilities.

In a memo explaining the decision, Deputy Attorney General Sally Yates wrote that private prisons “simply do not provide the same level of correctional services, programs, and resources,” “do not save substantially on costs,” and “do not maintain the same level of safety and security” as facilities operated by the Bureau of Prisons.

But as the criminal justice community began to take stock of the news, many also expressed hopes that the DOJ would not be the only government agency to cut ties with the private companies, which also operate state prisons and immigration detention centers.

In particular, advocates directly called on the Department of Homeland Security’s Immigration and Customs Enforcement — which is responsible for holding a growing number of detainees with pending immigration cases or awaiting deportation — to end its multimillion-dollar relationship with the private corrections industry.

A spokesperson for ICE did not specifically comment on the impact of the Justice Department’s announcement on its own relationship with private prison companies but said the agency “remains committed to providing a safe and humane environment for all those in its custody” and “provides several levels of oversight in order to ensure that detainees in ICE custody reside in safe, secure, and humane environments and under appropriate conditions of confinement.” 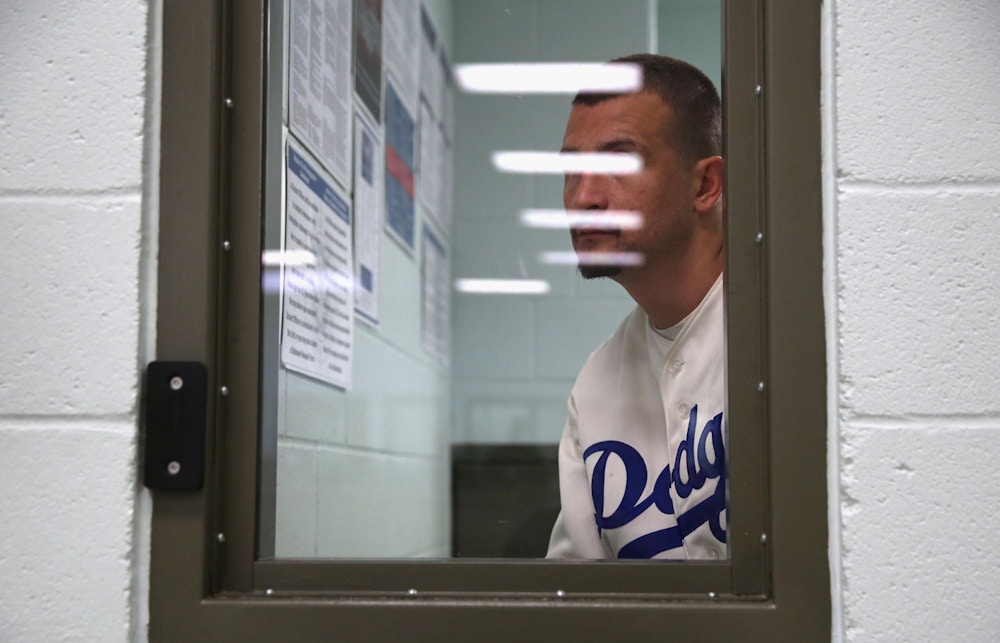 A man waits in a processing cell at the GEO Group-operated Adelanto Detention Facility, the largest immigration detention facility in California, on Nov. 15, 2013.

While the Justice Department’s decision is set to impact 13 privately run federal prisons and some 22,660 prisoners, the potential impact of a similar decision by ICE would be considerably more significant for the agency. The ICE spokesperson said that 46 of the agency’s facilities are operated by private contractors. While the immigration detention population fluctuates, private contractors oversee a daily average of 24,567 detainees — out of the average 33,676 held in ICE detention each day. As of 2014, the immigration detention population had jumped 47 percent over the prior decade. Immigration advocates say that growth is both unjustified by public safety needs and sets the stage for neglect and abuse.

“As of today, the Bureau of Prisons’ two-decades experiment with private prisons is finally beginning to come to an end,” David Fathi, director of the American Civil Liberties Union National Prison Project, told The Intercept, calling the decision “historic.” “We hope that ICE and the states will follow the lead of the Justice Department.”

Grace Meng, a Human Rights Watch senior researcher focusing on immigration issues, called the DOJ’s announcement “incredibly exciting news.” “This should prompt Immigration and Customs Enforcement to stop their use of private immigration detention facilities, run by the same companies,” she added, while also noting that “focus on private companies shouldn’t remove scrutiny from county jails and other ICE facilities that are also rife with problems.”

States have traditionally taken the federal Bureau of Prisons as a model for best practices, but for ICE, severing ties would be a logistical feat of immense proportions. ICE’s contracts with private companies can be difficult to track as they are often executed through local county government — a decentralized approach to the privatization of detention that has also made these facilities harder to monitor.

“In terms of percentage, ICE is the agency that has the biggest share of its prisoners and detainees in private prisons,” said Fathi, also noting that while the federal prison population has decreased quite significantly in recent years, “the same is not true of the ICE detainee population.”

“It’s definitely going to be harder for them,” he said.

Hard or not, corrections operators are obligated to guarantee a number of protections, regardless of law enforcement needs, Meng noted.

“The assumption that ICE can’t do this is completely false, because the fact that the detention system is as large as it is now has not been historically true,” she said. “There’s an inflated sense of how many people actually need to be in detention at any given time. What we have seen is there is a huge number of people who should not be there at all: children, families, people who are not a current threat to public safety, who have really strong claims to release.”

According to a report released last year by the Center for American Progress, federal contracts, including those from the Bureau of Prisons and ICE, jumped from 39 percent of CCA’s total revenues in 2005 to 44 percent — $724.2 million — in 2014. That year, ICE contracts alone made up 13 percent of CCA’s revenue — $221 million. Similarly, federal contracts rose from 27 percent of the GEO Group’s revenues in 2005 to 42 percent in 2014, with ICE accounting for 15.6 percent of the pie.

Just days ago, details emerged about about a four-year, $1 billion contract ICE awarded to CCA to house Central American asylum seekers in Texas.

Jonathan Burns, a spokesperson for CCA, wrote in a statement to The Intercept that federal prisons make up only 7 percent of the company’s business, adding that the DOJ’s report had “significant flaws.”

“The findings simply don’t match up to the numerous independent studies that show our facilities to be equal or better with regard to safety and quality, or the excellent feedback we get from our partners at all levels of government,” he wrote. “We value our partners, and we will continue to work with them, both through the types of management solutions we’ve provided for more than three decades, as well as new, innovative opportunities we’ve been exploring in recent years in a proactive effort to meet their evolving needs.”

In a statement to The Intercept, a spokesperson for the GEO Group wrote, “While our company was disappointed by today’s DOJ announcement, the impact of this decision on GEO is not imminent.”

“Notwithstanding today’s announcement, we will continue to work with the BOP, as well as all of our government partners, in order to ensure safe and secure operations at all of our facilities.”

But as they are slated to lose millions and wield significant lobbying power, it’s unlikely that private prison companies will go without a fight.

“Their stock is dropping like a stone. I’m sure they’re not happy and I’m sure they’ll complain they’re being unfairly treated, but the fact is, there is abundant evidence that private prisons are not as safe and not as secure and the services they provide to prisoners are inferior,” Fathi said. “Certainly the government has every right to decide that their services are no longer needed.”

Update: Aug. 18, 2016
This story has been updated to include statements from ICE, CCA, and the GEO Group provided after publication.

Correction: Aug. 18, 2016
An earlier version of this story misstated the timing of an ICE detention contract awarded to CCA; the story has been updated to correct the error.