Ever since Richard Nixon stifled the antitrust investigation into ITT, a major donor, White House interference in antitrust cases has been particularly verboten. 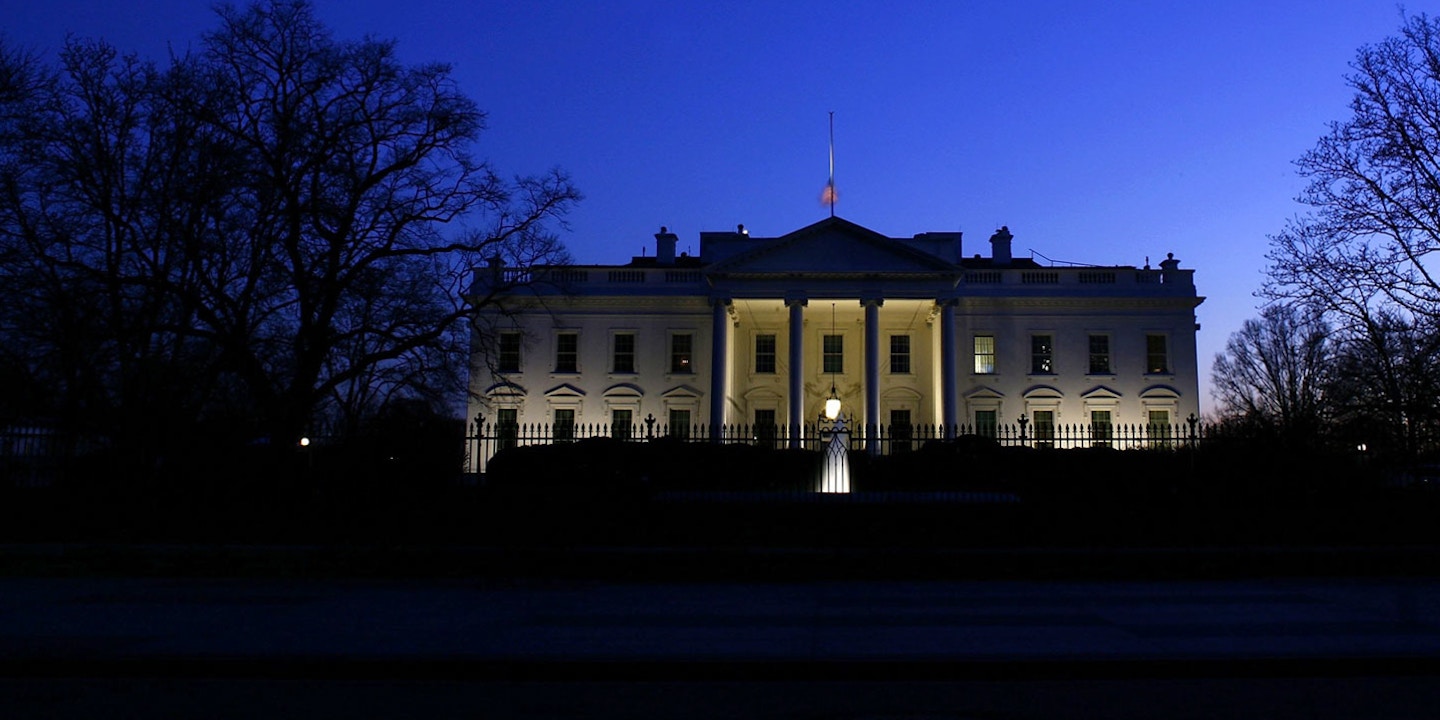 When the Federal Trade Commission neared a momentous decision on whether to charge Google with violating antitrust laws in January 2013, the White House was watching closely.

And minutes prior to the final decision – in which FTC commissioners took the unusual step of overriding their staff’s recommendation to sue, and voted to settle the case instead – the White House official even sought Google’s talking points in the matter.

The FTC is an independent agency within the executive branch. As with the Justice Department, the White House political staff is prohibited from contacting federal regulators who might bring a formal case on behalf of the government. And ever since Richard Nixon stifled the antitrust investigation into ITT, a major donor, White House interference in antitrust cases has been particularly forbidden.

When Donald Trump threatened to bring up Amazon on antitrust charges because he was getting bad press from the Washington Post, owned by Amazon founder Jeff Bezos, it was correctly seen as chilling.

The revelation about the White House’s contacts with Google prior to the FTC decision is another example of the extraordinarily close relationship between Google and the Obama White House. In April, the Campaign for Accountability found — and The Intercept published — evidence from the White House’s own records of frequent meetings between Google staff and Obama administration personnel – over one a week since the beginning of his presidency – and spins through the revolving door between Google and the U.S. government. Nearly 250 people have shuttled from government service to Google employment or vice versa over the course of Obama’s tenure.

This close contact, as well as Google’s partnership with the executive branch on a host of projects, almost inevitably breeds a camaraderie that is at odds with the ability of the government to actually regulate a private company. The West Wing’s coziness with Google officials prior to the antitrust decision speaks to that.

At the time, the FTC was looking into allegations that Google harmed Internet customers and its rivals by prioritizing its own companies and affiliates in search engine results and its placement of online advertising on its search sites. The staff of the Bureau of Competition at the FTC recommended suing after concluding that Google engaged in anticompetitive conduct that “has resulted – and will result – in real harm to consumers and to innovation.”

But in the end, the FTC reached a settlement that forced Google into voluntary changes to its business.

“Johanna, I hear big news coming out momentarily,” wrote White House internet advisor R. David Edelman to Shelton on January 3, 2013, referring to the FTC’s imminent decision. “Do you have the release and any accompanying materials from Google’s side? Obviously, lots of interest here at the WH.” 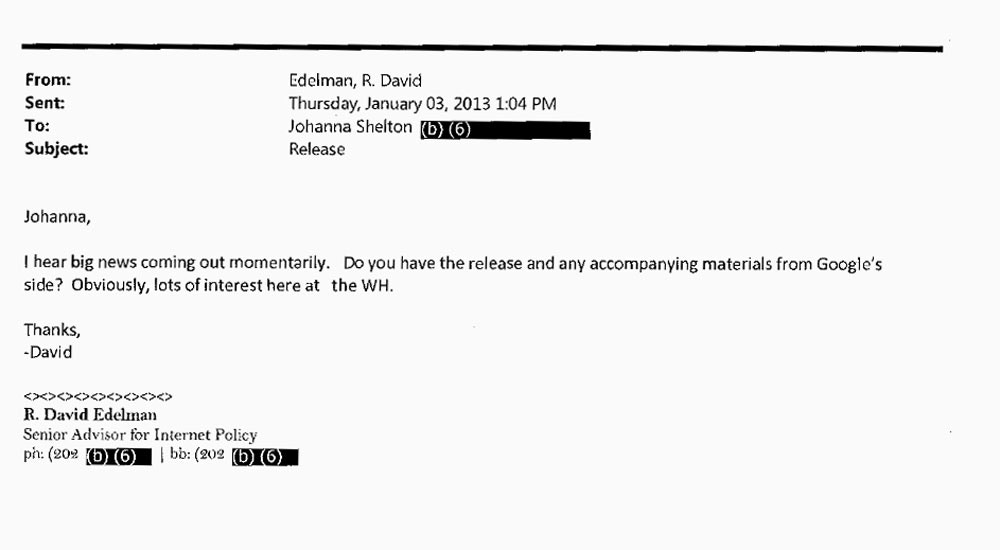 The FTC announced its decision that day. Within 20 minutes, Shelton responded to Edelman with links to Google’s statement on the closing of the antitrust case, and its “commitment letter” to voluntary changes, as per the FTC’s order. “Please let me know if you have any questions,” Shelton said. A minute later, Edelman replied. “I’m watching the webcast now,” he wrote, presumably referring to the FTC’s announcement of closing the case. “Thanks for the links!” 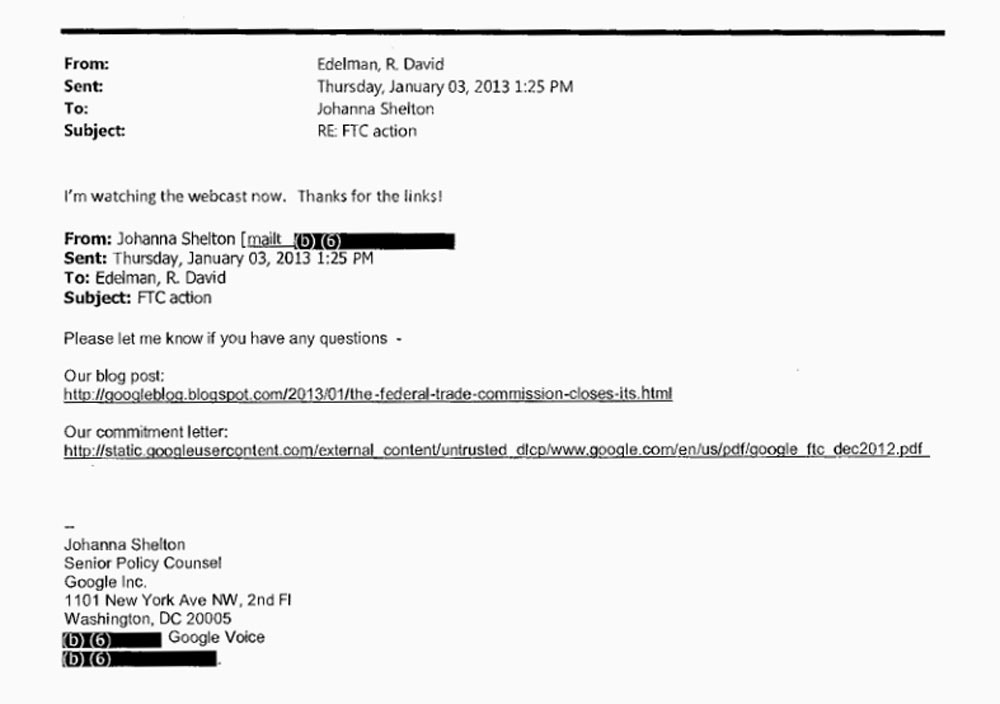 The newly released emails reveal that the White House was interested in and actively discussing the case before the FTC made their decision, and let the target of the investigation know that. Based on previous open records requests, we also know that meetings between Google executives and White House personnel spiked in the months leading up to the FTC decision.

Edelman met personally with Shelton and Bye twice in the final weeks of the investigation. Between 2012 and 2015, Edelman held at least 18 meetings with Google officials in the White House, per previously released records.

That does not include informal meetings outside the White House at D.C. coffee shops, a technique the White House has been accused of using to get around public records. Edelman’s emails include references to these meetings.

Obama Administration officials have maintained that they did not pressure the FTC in any way to close the investigation into Google. “Our staff is cognizant that it is inappropriate to discuss issues relating to regulatory enforcement,” said spokeswoman Jennifer Friedman in 2015, adding that the FTC “is an independent agency and we respect their independent decision-making.”

Many tech industry rivals claim that Google still biases its search engine results and advertising. The European Union, operating with the same evidence, has filed three antitrust charges against Google over this behavior, the most recent in July.