Nearly 20 years ago, while Turkey was in the midst of a military coup, I interviewed a member of a secretive religious organization whose membership and aims were little understood. Nearly 20 years ago, while Turkey was in the midst of a military coup, I was asked to interview a member of a secretive religious organization whose membership — and even its aims — was little understood.

I was a young reporter for a television news program, Teke Tek, and Mr. X, as we referred to him, was a member of a group led by Fethullah Gülen, known to his followers as Hocaefendi.

We spent days together, starting in the morning and sometimes talking until midnight. What he said was astonishing. Mr. X, a shy, well-behaved young man, told me about the movement’s clandestine methods to sneak into the military schools.

First, we determine the talented, brilliant, but at the same time loyal 11- to 12-year-old students to prepare them for the military school examinations. Then we separate them from the others. And we start to meet with them secretly. We never talk in public area. We don’t want to be seen with them. Because if the military knows that these students are taught by us, they don’t have a chance to get in. And once they’ve been elected, we keep communicating again carefully. Precaution is essential for us. This is Hocaefendi’s order. And if we suspect that the relationship might be uncovered, we cease to see the student. Sometimes this non-communication takes years. But one day, we remind the student ourselves. And he always responds positively. That is why we pick the most loyal ones. And that is why they obey their hierarchal level. Everyone talks to his own big brother. No one can break the hierarchy.

According to Mr. X, the mostly highly prized of the recruits were the military pilots, and particularly pilots who could fly the American-made F-16 fighters. “Without exception, Hocaefendi wants to see every F-16 pilot by himself to bless him, even though it is very rare to see him if you are not a high-level imam,” Mr. X said (senior leaders in the organization are called “imams”). Mr. X said he was tired of the secrecy and was leaving the movement and wanted people to know about its operations.

At the time, I was shocked by this description of a massive organization. The Gülenists were, according to Mr. X, recruiting in the police, the judicial system, and other government agencies. Gülen’s followers were creating a playbook for religious adherents to survive in a government dominated by a rigid secular ideology promulgated by the Kemalists. A police officer stands next to an armored vehicle used by soldiers during the coup attempt at Taksim Square in Istanbul, Turkey, on July 17, 2016.

But after the February 28 military coup of 1997 and the resignation of the Islamist prime minister, circumstances changed. Fethullah Gülen left Turkey for the U.S. in 1999. Three years later, AKP, an Islamist political party, came to power in Turkey with the support of Gülenists, and being religious was no longer a reason to be excluded from the government.

I didn’t see Mr. X again. I had finished my interview with him and gave the notes to the anchorman, who was planning to write a book. Nothing was ever published or broadcast, however. Mr. X was never exposed, and he started a new life after leaving the movement.

Much has changed in the intervening years, most notably a break between Gülen and the AKP’s charismatic leader, Recep Tayyip Erdogan, now president of Turkey. Clashes between the two fronts erupted in 2012, and Erdogan accused the Gülen movement of creating a “parallel structure” within the state. When followers of the Gülen movement in the police and the judiciary initiated a graft probe against the Erdogan government on December 17, 2013, the hostility between Gülen and Erdogan boiled over into the public.

Then, last month, when the military initiated a thwarted coup, Erdogan pinned the blame on Gülen.

It’s unclear whether Gülen and his movement were really behind the coup, but a source I spoke to recently said the structure that Mr. X outlined for me years ago had changed. The Gülen movement was still powerful, and Gülen was now communicating directly with the middle-level imams. “Before, Hocaefendi was very strict about the rules that he set,” he told me. “A mid-level imam could never talk to him directly without his own big brother. But five to six years ago, Hocaefendi started to welcome the imam of the military, for example, without his superior. He was talking to them privately.”

The people Gülen was talking to were ambitious young men in their 30s, and older members — the “big brothers” — were upset about being excluded and concerned about what the younger members were telling Gülen. “I am sure that if these big brothers were involved with these conversations, they would raise their concerns about some of the ideas that mid-level imams suggested to Hocaefendi.”

Even though there’s no public evidence that last month’s coup attempt is linked to Gülen, Erdogan’s government responded by dismissing or detaining over 100,000 people — a reflection of how deeply Erdogan believes Gülen’s followers have penetrated official institutions. Erdogan has also requested that the U.S. extradite Gülen back to Turkey.

The U.S. government said Turkey must first present evidence of alleged complicity for action to be taken against Gülen, who has been living in Pennsylvania for the past 17 years. President Obama personally denied press reports that the U.S. either knew or assisted with the attempted coup.

“America’s governed by rules of law, and those are not ones that the president of the United States or anybody else can just set aside for the sake of expediency,” Obama said of Ankara’s extradition request during a press conference. “We’ve got to go through a legal process.”

Recently, the Turkish government has raised a new concern regarding Gülen. The Turkish justice minister, Bekir Bozdag, warned that Gülen could flee the U.S. to seek political asylum in Australia, Mexico, South Africa, Egypt, or Canada.

Of these countries, only Canada is considered a serious option by those inside Gülen’s movement. Canada, unlike the United States, does not have an extradition treaty with Turkey.

“Immigration, Refugees and Citizenship never confirms or denies whether a person has made an asylum claim,” Nancy Caron, the agency’s spokesperson, said. She said that Canada offers refugee protection to people in Canada who fear persecution and are unwilling or unable to return to their home country. 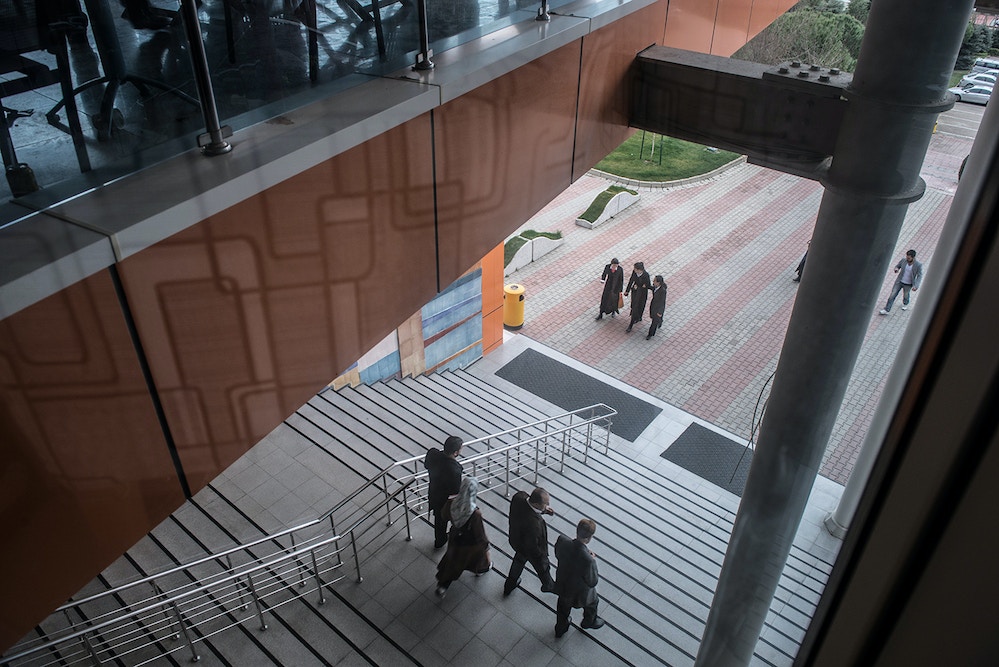 Fatih University in Istanbul was founded by the Gülen movement.

Is that a serious option for Mr. Gülen? Is he packing for Canada?

His spokesperson Alpaslan Dogan denied these rumors. “No such plans,” he told The Intercept.

Graham E. Fuller, a former vice chairman of the National Intelligence Council at the CIA, and one of the prominent figures who helped Gülen obtain his green card eight years ago, said he doubted the U.S. would extradite Gülen or force him to leave, unless Turkey provided concrete evidence of his involvement in the attempted coup.

“I suppose if the U.S. said he should leave if he didn’t want to get extradited, I suppose he would have to consider it,” wrote Graham, who lives in Canada and is currently an adjunct professor of history at Simon Fraser University, in an email exchange.

“Would Canada accept him?” Graham asked. “Possibly, but it depends on how much Canada’s relations with Turkey matter.”

So what about Mr. X, the young man I interviewed nearly two decades ago? I was told that he had returned to the Gülen movement and had moved to Canada.

“It has been years,” I said, when Mr. X picked up the phone. “Hope you are doing well.”

He didn’t say anything for a few seconds. And then he replied, “I was waiting your call.”

“Did you rejoin the movement?” I asked.

He didn’t want to answer.

I explained to him that these many years later, I wanted to use the notes from our interviews.