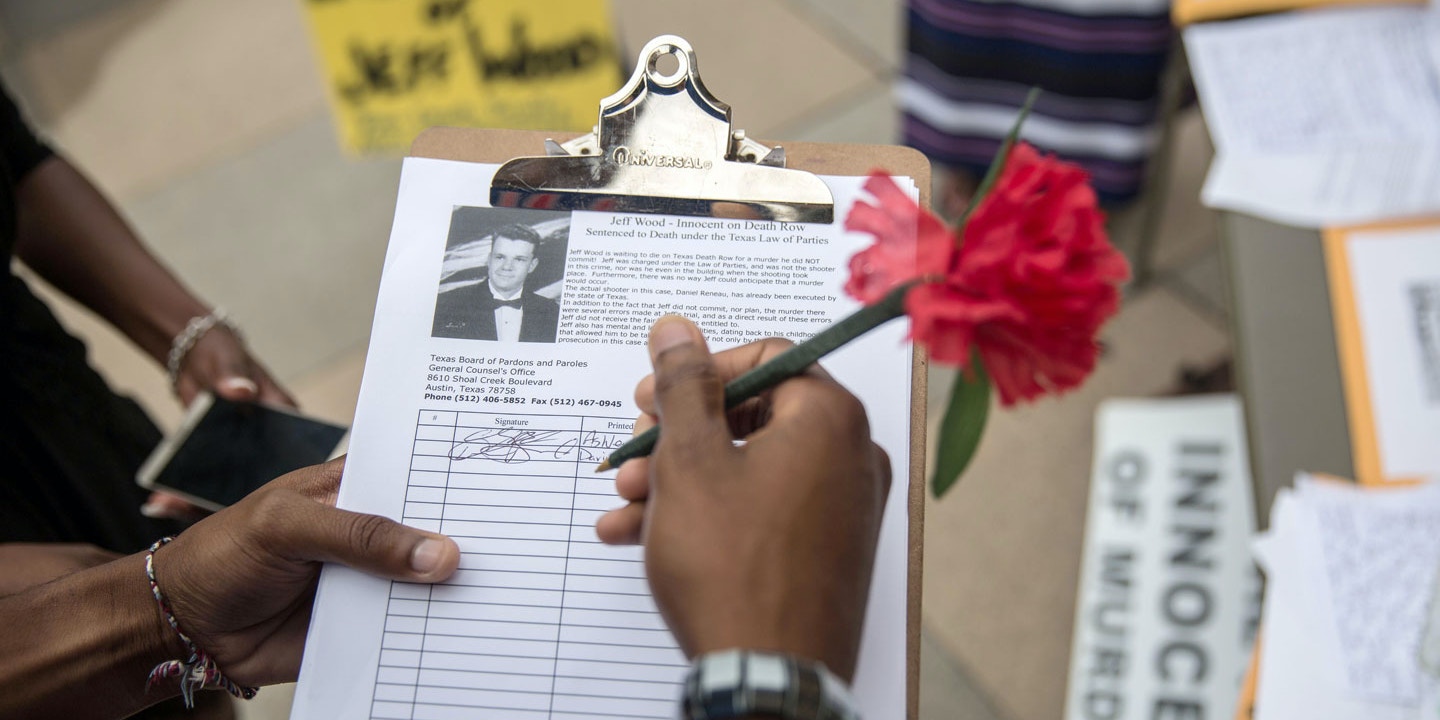 Terri Been was being interviewed by a reporter inside a Whataburger restaurant in East Texas on the afternoon of August 19 when the text came in: Her brother, Jeff Wood, on death row for his alleged involvement as an accomplice in the 1996 murder of his friend and facing imminent execution, had been granted a stay. She read the text sent by Wood’s attorney twice before dialing him up. “Are you serious?” she asked.

It had been a long and emotionally taxing day: Been and her husband, her parents, Wood’s daughter, and another friend had traveled to Huntsville, Texas, the location of the state’s execution chamber, for the first of several eight-hour visits with Wood in anticipation that he would be executed sometime after 6 p.m. on Wednesday, August 24. The news from the lawyer, Jared Tyler, was a serious relief. “I consider it a miracle,” she told The Intercept. “He’s stopped Texas from killing my brother.”

That afternoon, the state’s highest criminal court, the Court of Criminal Appeals, agreed with Tyler that a state district court should determine whether the punishment hearing portion of Wood’s 1998 trial was infected by junk science and misleading testimony offered by the notorious Dr. James Grigson. If the district court agrees that it was tainted, Wood could get a new hearing, and a chance to get off of death row.

Grigson, who died in 2004, was known even among peers in the psychiatric community as “Dr. Death” for routinely offering scientifically unsupportable testimony that helped send defendants to death row in a number of capital cases. He was expelled from the American Psychiatric Association and its Texas counterpart prior to testifying in Wood’s case, where he opined that unless sentenced to die, Wood would continue to be violent, a determination he made without ever examining Wood.

But the court majority sidestepped — at least for now — the biggest question in Wood’s case: Is he legally eligible for the death penalty? That prompted a strongly worded opinion from one of the court’s nine jurists, Elsa Alcala, who for at least the second time this year has called into question whether Texas’s death system itself is constitutional — an unusual stance for a jurist on such a conservative and notoriously pro-death penalty court in the state with the nation’s most active execution chamber. Indeed, Alcala has been airing concerns that have not been expressed in any meaningful way by any member of that court in nearly two decades. Wood, she wrote, “may be actually innocent of the death penalty because he may be categorically ineligible for that punishment.” Elsa Alcala (center) during the State of the Judiciary speech at the Texas Capitol, March 6, 2013.

Wood is on death row even though he has never killed anyone. He was convicted and sentenced to die for the January 2, 1996, robbery of a convenience store that ended with the shooting death of his friend Kriss Keeran, who worked at the store. But it was another man, Danny Reneau, who entered the store armed, intending to rob the place, and shot Keeran. Wood, Reneau, Keeran, and another store employee had planned an inside-job robbery for the previous day, but the plan had been aborted. Wood said he had no idea that Reneau intended to rob the store that day, and certainly had no idea that Reneau would kill Keeran. After the murder, Wood admits that he did help Reneau steal money from the store, along with a surveillance videotape, but says he did so only after Reneau threatened to harm his daughter.

But a quirk of Texas law allows the state to seek the death penalty against a defendant who never killed or intended to kill anyone. Known as the law of parties, the law posits that if conspirators plan to commit one crime — in this case, a robbery — but in the course of events someone ends up committing another crime (such as a murder) all parties are liable for the crime committed regardless of their individual intent, under the notion that everyone should have anticipated that the crime committed would occur.

Advocates and lawyers argue that Wood’s impending execution would violate the Eighth Amendment ban on cruel and unusual punishment. It is an argument that would appear to be in line with U.S. Supreme Court precedent, which holds that a sentence must be proportional to the crime committed. In two cases involving parties to a planned crime that ended in murder, the court determined that the death penalty would be unconstitutional when a person lacked either the intent to kill or failed to exhibit a clear “reckless indifference” to human life.

No court has ever considered whether Wood’s sentence was proportionate to his crime. Although Tyler finally raised the question directly in Wood’s most recent appeal, in staying the execution last week the Court of Criminal Appeals declined to ask the lower court to address the issue — except for Alcala, who opined in favor of addressing the question head on. “Perhaps one might suggest that I should not concern myself with the fact that applicant’s death sentence appears to be unconstitutional under [Supreme Court precedent] because [Wood] should have raised this claim at some earlier stage of his post-conviction challenges and he is now procedurally barred from raising this challenge,” she wrote. “I, however, would disagree with that suggestion.”

It was the latest in a string of opinions by the conservative jurist questioning the legality of the death penalty and the approach of her colleagues to affirming death sentences. Alcala, who was appointed by Gov. Rick Perry, has questioned her colleagues’ reluctance to allow inmates to present evidence challenging the Texas system as racist and out of step with a nation that is moving away from the death penalty. She has written strongly worded dissents in two notable cases involving the question of whether racially discriminatory testimony and poor lawyering condemned Duane Buck to die, and in another urging her colleagues to act to “uphold the federal Constitution” by setting up a modern and fair system for determining which defendants are barred from execution because of their intellectual disability. In the absence of a legislative standard, the court set up its own scheme for determining cognitive disability, a standard based on the mental abilities of the character Lennie from John Steinbeck’s Of Mice and Men.

The level of skepticism Alcala has expressed regarding the state’s death penalty scheme — and her colleagues’ role in maintaining the status quo — hasn’t really been seen in Texas since Republicans took over the court in its entirety nearly two decades ago. As conservative jurists came to power in the 1990s, a waning contingent of Democratic judges held on, including Judge Charlie Baird, now a defense attorney in private practice in Austin. Baird said he and his colleagues would regularly dissent from the majority’s rubber-stamping of death convictions. In 1996, Baird authored a dissent suggesting that Texas was not fulfilling its promise to the U.S. Supreme Court in the wake of the 1976 opinion that reauthorized the death penalty. Texas had promised “we would interpret the statute fairly and apply the death penalty fairly,” he recalled. “And I don’t think we ever kept those promises.”

To be fair, other Republican judges have joined or written dissenting opinions in the intervening years, but none so clearly skeptical of the system as Alcala’s — save for a literal swan song opinion by Judge Tom Price, who opined in 2014, just before retiring his seat, that the death penalty “should be abolished.”

Although Alcala hasn’t uttered the same words, she nonetheless stands out even more than Price in one key way — her current term is up in 2018, meaning that speaking out could derail her chances to remain on the court in the future. In a profile published by Fusion, Alcala said it was “unlikely” that she’d run again, but also acknowledged that she has not made any definitive decision.

Attorneys with considerable experience litigating capital cases before the Texas court say they are encouraged by Alcala’s opinions but are nonetheless skeptical that her more moderate and thoughtful approach to considering death penalty cases would necessarily have any outwardly obvious effect on her colleagues. “I’ve been waiting and I haven’t seen it. I just haven’t seen it,” said Keith Hampton, a veteran defense attorney who was behind the only successful bid to have a death sentence commuted by Perry during his three-term tenure as the state’s governor, during which time he presided over more executions than any other modern governor. Hampton said he could see Alcala’s approach evolving in recent years and believes now that she’s “genuinely dedicated” to reform. “Clearly she’s not playing to the crowd — because we’re in Texas and there is no crowd for this here.” In fact, Hampton worries that Alcala’s writings and public posture may have given ammunition to any number of aggressive prosecutors who could try to force her recusal from considering appeals of their death cases.

Bryce Benjet, a former lawyer with the nonprofit Texas Defender Service who now works for the Innocence Project, said it might be more significant that the concerns Alcala has expressed haven’t “happened with more frequency” on the court. But what is especially noteworthy, he said, is that these concerns are coming from a former prosecutor for Harris County (which includes the city of Houston), a jurisdiction responsible for sending hundreds of defendants to death row, and the U.S. county responsible for the most executions since 1976.

To Tyler, Wood’s attorney, Alcala’s views are more in line with those of the U.S. Supreme Court than with her colleagues. He notes that the Supreme Court has accepted for review two recent cases where she authored stern dissents — in the Buck case and in the case challenging the state’s process for determining cognitive disabilities. And he said he believes the Supreme Court should take up Wood’s case as well, to finally decide whether Wood’s sentence is proportionate to his crime.

In the meantime, Wood’s family has attracted another contingent of unlikely supporters in the form of conservative state House members who have been airing their own concerns about whether Wood’s sentence is proper. Ultra-conservative members have each spoken out about their concerns and have been trying to persuade the Board of Pardons and Paroles and Gov. Greg Abbot to consider commuting Wood’s sentence. “I believe the death penalty, and in some cases the law of parties, has a place. Human life, being made in the image of God, is very precious,” East Texas state Rep. David Simpson wrote in a column published in the Dallas Morning News. “In the case of Wood, I have seen enough questions to warrant advocating that his life be spared. Ultimately, God will judge our actions, and as humans we make mistakes and our justice system is not perfect.”