Though Promised for Domestic Use, Dakota Access Pipeline May Fuel Oil Exports

Proponents of the Dakota Access Pipeline claim the controversial project will enhance energy independence. But a portion of the oil may end up as exports to foreign markets. 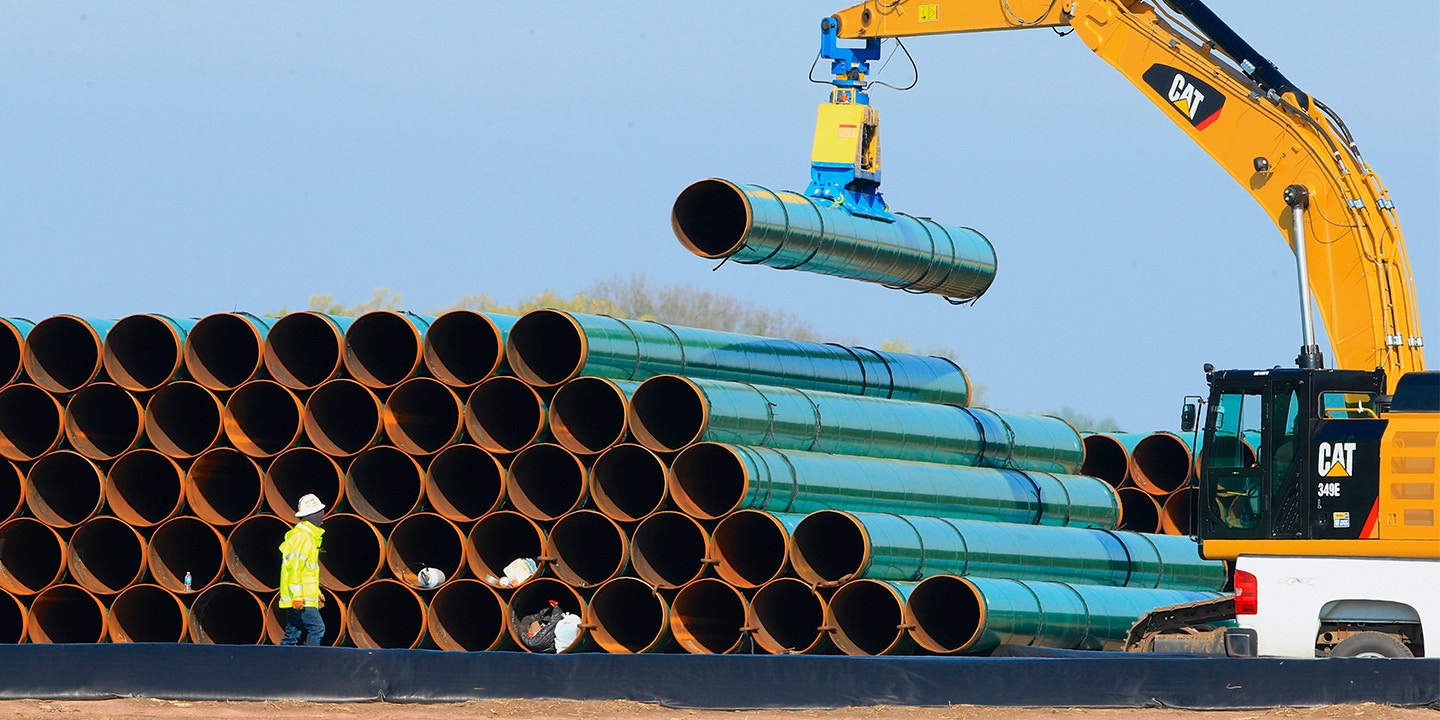 Proponents of the Dakota Access Pipeline, which will connect fracked crude oil from the Bakken fields in North Dakota to markets across the country — claim the controversial project will enhance energy independence. But at least a portion of the oil may well end up as exports to foreign markets, either as crude or as a refined product.

Energy Transfer Partners, the company behind the Dakota Access Pipeline, has built public support and pressured regulators to approve the project by asserting that the oil will enhance energy independence, because it will be used exclusively by U.S. consumers.

The company claimed in a presentation in Iowa, a state that granted approval for the project this year, that the pipeline will feature “100% Domestic produced crude” that “supports 100% domestic consumption.”

The domestic energy claim, which has been touted by company brochures and a pro-pipeline website, has also been used to criticize hundreds of demonstrators in North Dakota who say the Dakota Access endangers drinking water and threatens sites that are sacred to a number of Native American nations and tribes.

“It’s a shameful act by a group of people trying to disrupt our energy security and independence,” Dakota Access officials told the Associated Press in the response to the protests, which have blocked construction of the pipeline near the city of Cannon Ball, N.D. 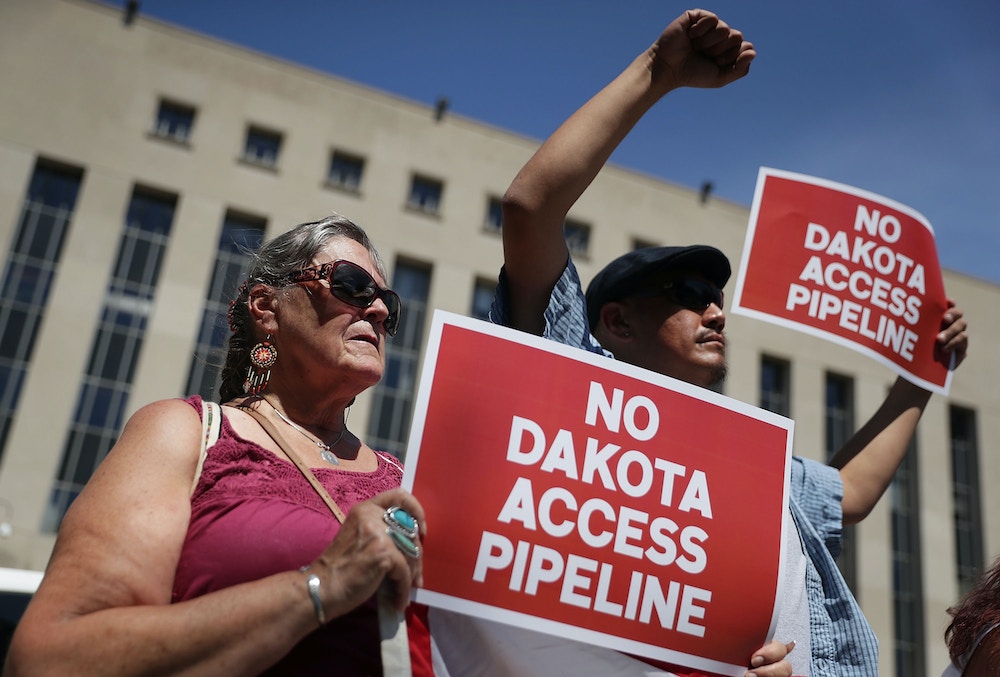 Members of the Red Lake Nation during a rally on Dakota Access Pipeline August 24, 2016 outside U.S. District Court in Washington, D.C.

But rather than serving the exclusive interests of American consumers, critics point to evidence the oil will go abroad. In December, Congress lifted the 40-year ban on crude oil exports.

“We track [Dakota Access Pipeline] and the export dynamics closely,” says Bernadette Johnson, the managing partner at Ponderosa Advisors, an energy advisory firm. Johnson notes that the pipeline provides a “competitive option” to bring Bakken barrels to the Gulf Coast, where “some of it may be exported.”

The Intercept also reviewed regulatory filings that suggest some of the oil transported by the Dakota Access Pipeline will be shipped overseas.

When reached for a comment, a spokesperson with the pipeline project declined to defend the firm’s earlier statements about “100% domestic consumption.”

“We will not own the oil that is transported through the pipeline. We are like FedEx. We will deliver the oil to the refineries for the producers,” said Vicki Granado, Energy Transfer Partner’s spokesperson.

The Dakota Access Pipeline route brings oil from the Bakken fields to a hub in Illinois, from which it will connect to existing pipelines that lead to the Nederland, Texas, terminal on the Gulf Coast, a facility owned by Sunoco Logistics, a partner to the Dakota Access project, capable of crude oil exports.

Energy Transfer Partners’ 10-K, filed with the Securities and Exchange Commission, notes that low crude oil price are a challenge for the company due to “general oversupply,” but that “export projects” under construction, including at Nederland, will “balance this market by 2018.” The filing also lists the Bakken pipeline in a section about positioning the company as a “leader in the export of hydrocarbons.”

Earlier this month, Energy Transfer Partners presented at an infrastructure conference sponsored by Citibank, highlighting the Dakota Access Pipeline as a “growth project” under a section about how the company is “exceptionally well positioned to capitalize on U.S. energy exports.” 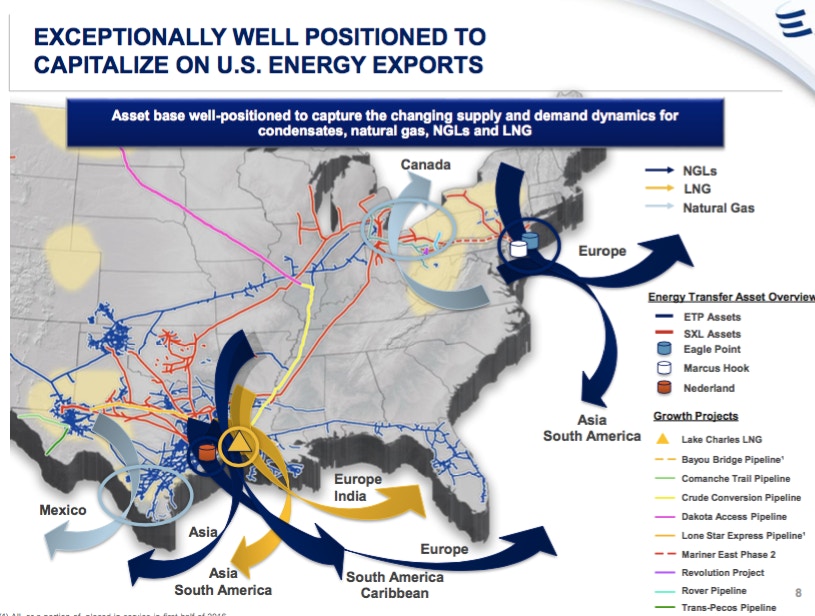 Opponents of the pipeline in Iowa and South Dakota raised concerns that the project might not serve the public interest the recent decision to lift the ban on exporting crude would mean oil transported by the pipeline might be destined for foreign markets.

“We are certain that this oil will be sent to the Gulf of Mexico and sold to the highest bidder,” says Jonas Magram, an Iowa resident who lives in a county along the path of the Dakota Access pipeline, who has protested the construction. Magram says the claim that the Dakota Access is designed to boost energy independence is “absolutely baseless,” especially since the unrefined oil can now be exported.

Attorneys for the Dakota Access project have repeatedly dismissed those concerns, calling them “irrelevant.”

But the firm had more than a passive role in the decision to repeal the export ban.

Top photo: Pipes for the proposed Dakota Access Pipeline at a staging area in Worthing, S.D. , on May 9, 2015.