Donald Trump and the Art of Spinning Secrets Into Lies

Classified intelligence is an incredibly useful instrument for shaping public opinion. Trump’s misbehavior points to the deeper problem of how government can claim to serve the people while holding back so much information. 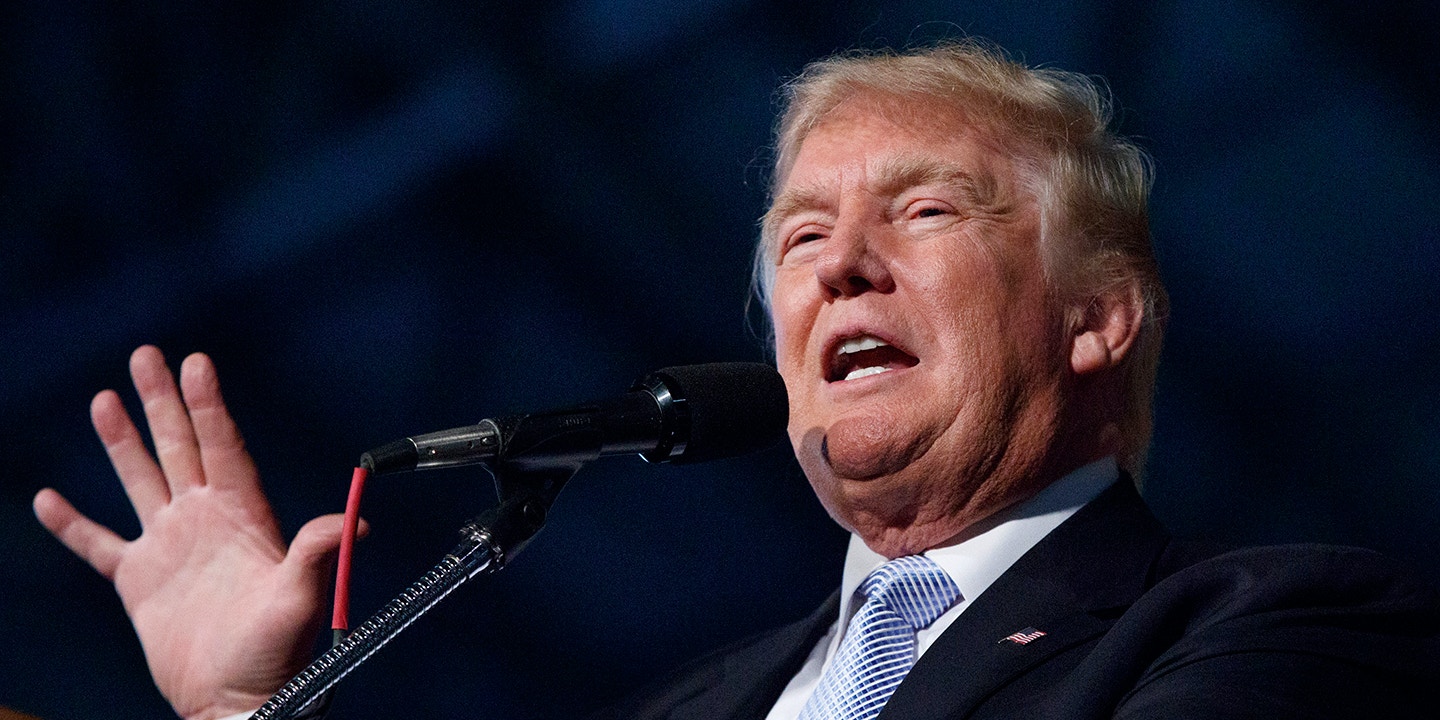 This year, some suggested that Donald Trump, the Republican nominee for president, should not be privy to classified briefings due to his habit of sneezing out the unfiltered contents of his head into the public domain. “This man is dangerous,” said Sen. Harry Reid, the Democrats’ minority leader, in a recent interview. Reid suggested that intelligence officials deceive Trump with phony secrets: “Fake it, pretend you’re doing a briefing,” he said.

In 1952, Harry Truman started the practice of letting presidential candidates sample secret intelligence. Three candidates have since declined to receive the special briefings — Barry Goldwater in 1964, Walter Mondale in 1984, and Bob Dole in 1996. But how to deal with a candidate who can’t keep his mouth shut? In Trump’s case, fairness prevailed over caution. President Obama decided to admit Trump into the classified world, although this year’s briefings are reportedly classified at the level of secret, not top secret as they were during the 2008 race.

Last month, Trump got his first two briefings at an FBI field office in New York City, inside a special room known as a Sensitive Compartmented Information Facility, a SCIF, pronounced “skiff.” He brought along New Jersey Gov. Chris Christie and Lt. Gen. Michael Flynn, two senior members of his national security brain trust. The leakage began on Wednesday night, during the Commander-in-Chief Forum held aboard an old aircraft carrier, where Trump and Hillary Clinton relied on military veterans to prepare the rhetorical battlespace in lieu of speaking directly to one another. At one point, Matt Lauer, the moderator and host of the Today Show, asked Trump about his secret briefings. Was there anything surprising about them?

“Yes,” Trump said. “Very much so.” He hinted at a secret so vague and tantalizing that it almost sounded like a clickbait headline. “There was one thing that shocked me.” But Trump couldn’t say what it was. What he could say was that the White House had ignored its experts, turned around, and done “exactly the opposite. … Our leaders did not follow what they were recommending.”

Trump knew this, he said, because he could read his briefers’ body language. Through decades of experience making real-estate deals, apparently, Trump believed that he could discern his interlocutors’ feelings about President Obama, even if they were not revealed by their words.

Trump’s claim violated one of the major articles of faith held by the U.S. intelligence community. American spies may answer to politicians, but they pride themselves on the belief that they themselves are not political.

“Our intelligence community historically has been very, very careful not to politicize its message,” says David Priess, a former CIA official and author of “The President’s Book of Secrets.” To alter intelligence to win over a candidate or achieve some political objective, Priess said, “violates the core ethic of the intelligence community: Tell truth to power regardless of what the customer wants to hear.”

It took less than 24 hours for the intelligence establishment to accuse Trump of indiscretion. Michael Hayden, the former head of the CIA and NSA, said his behavior was “awful.” Michael Morell, the former deputy CIA director, questioned Trump’s claim that his briefers disagreed with Obama’s policies. By wrongly impugning his briefers by accusing them of political bias, Morell said, Trump had “crossed a long-standing red line.” The red line didn’t stop two briefers from giving their own anonymously sourced version of how Team Trump rocked the SCIF — Flynn repeatedly interrupting; Christie telling him to settle down.

In fact, Trump was singing a familiar refrain, one that is heard whenever classified information touches political ambition. It goes like this: Trust me. You don’t know what I know. I was in the room. I heard some scary things. I can’t tell you any more.

There is no “red line” against this kind of semi-deceptive nondisclosure. Classified intelligence (as Morell and Hayden are aware) is an incredibly useful instrument for shaping public opinion. Most candidates wait until they actually win the presidency before using it in this way. Trump didn’t wait. Neither did John F. Kennedy, who received classified briefings on the U.S. nuclear program even as he attacked the incumbent, Dwight Eisenhower, over the nonexistent “missile gap.” Compared to Kennedy’s politicization of what turned out to be incorrect intelligence, which contributed to the early acceleration of the Cold War, Trump’s claim to be able to read the minds of people across the table was clumsy at best.

The intelligence briefs given to the candidates “exclude the most sensitive sorts of information,” wrote Steven Aftergood, director of the Project on Government Secrecy for the Federation of American Scientists, in an email. He considers it “unlikely” that the briefings “would create any security risk at all.”

There is something unfair about Trump’s using his briefers as “props,” as Hayden put it, to malign Obama’s policies without offering any names or specifics. But Trump’s misbehavior is not exceptional. His mendacity points to a much deeper problem of how government can claim to serve the people while holding back so much information. Those who have access — or who have been led to believe they have access — to secret information never have to engage in a reasoned debate with those who don’t. All they have to do is pound the table and wave their arms about the classified “facts” that supposedly back up their case.

“Every statement I make today is backed up by sources, solid sources … facts and conclusions based on solid intelligence,” said Colin Powell, in his infamous 2003 speech to the United Nations. Like Trump’s briefings, Powell’s hard-won intelligence proving that Saddam Hussein had weapons of mass destruction was too secret to be shared in full. It could only be summarized. Months later, the public learned of the gap between what Powell said his sources said, and what those sources actually said. By that time, it was too late.

Powell’s speech is far from the only instance in which evidence that is too secret to be discussed has turned out not to be true. Some other lies that were backed up by top-secret bluffing: Waterboarding is useful. Al Qaeda is smuggling operatives over the border from Mexico. Drone strikes are so precise that the CIA went for an entire year without killing a single civilian in Pakistan. The North Vietnamese attacked the USS Maddox at the Gulf of Tonkin. The government does not conduct mass surveillance on millions of ordinary Americans.

Each of these statements turned out to be false; in each case, the officials who delivered the lie used classification as an excuse to avoid giving evidence. If Trump lied on Wednesday about the “experts” who gave him his briefing, his mistake may have been that his lie was too small.