Trump’s peacenik credentials are undermined by his vision of American troops as the muscle in a protection racket aimed at extorting oil from Iraq and Libya. 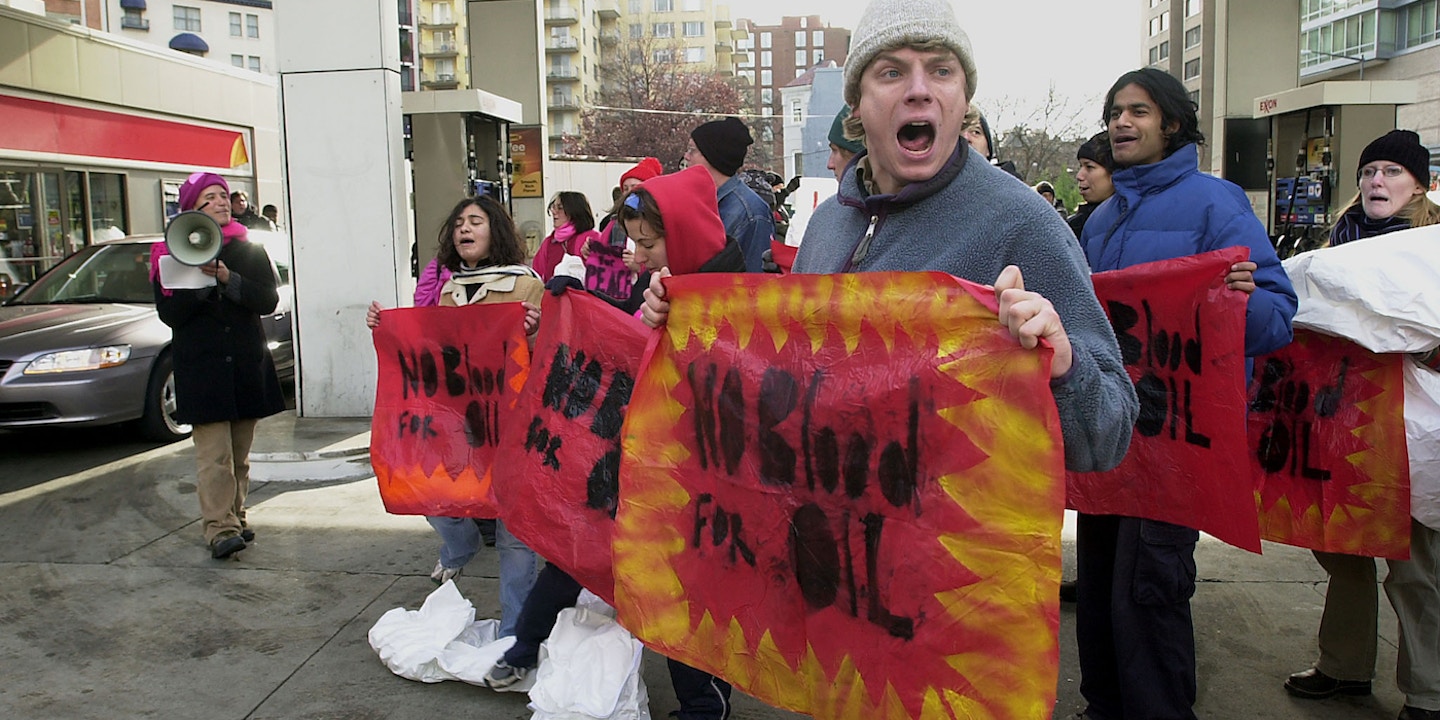 Donald Trump’s attempt to present himself as an anti-war candidate is based on his perfect 20/20 hindsight of the disastrous consequences of regime change in Iraq and Libya — military campaigns he publicly supported when they were popular, and only turned against after they went wrong.

To better understand that Trump really is, as he insisted during the Republican primary campaign, “much more militaristic” than even George W. Bush, it helps to look at how often he has presented his bizarre plan to use the United States military as the muscle in a global protection racket, aimed at extorting oil from countries we destroy.

Trump began to make this case at a crucial moment, in early 2011, when he was flirting with a run for the presidency and the Obama administration was trying to decide how to use American power in Libya and Iraq.

That February, when President Obama was considering the intervention in Libya that his secretary of state, Hillary Clinton, strongly advocated, Trump demanded immediate action to topple Col. Muammar el-Qaddafi in a statement posted on his YouTube channel.

“I can’t believe what our country is doing,” Trump said on February 28, 2011, two weeks before the Obama administration got Security Council authorization “to protect civilians” in Libya. “Qaddafi in Libya is killing thousands of people, nobody knows how bad it is, and we’re sitting around we have soldiers all have the Middle East, and we’re not bringing them in to stop this horrible carnage and that’s what it is: It’s a carnage.”

“After it’s all done, we go to the protesters, who end up running the country,” Trump added, “and we should then say, ‘By the way, from all of your oil, we want reimbursement.’”

A month later, as Bill O’Reilly quizzed him on how he would handle foreign policy as president, Trump revealed that he had an entirely new plan for Iraq: American troops should be withdrawn, but only from those parts of the country without oil fields.

TRUMP: I’ve never said this before. This is a first, on your show. Good luck with it, run with it. In the old days, when you had wars, you win, right? You win. To the victor belong the spoils. So when we go to Iraq, we spend $1.4 trillion so far and thousands of lives are lost, right? And not to mention all the poor guys and gals with one arm and no arm and all the problems, right?

TRUMP: And we’re going to leave and as sure as you’re sitting there, Iran is going to come over, take over not only Iraq but perhaps more importantly to them, take over the second biggest oil fields in the world, right? And I like the old system better: You won a war, you stay there, and you keep the oil. And you know, then those people will not have died in vain. Forget the money we spent, they will not have died in vain. Now, they’re not going to come as long as we’re there, but 15 minutes after we leave, Iran is going to go into Iraq. …

You stay and protect the oil, and you take the oil and you take whatever is necessary for them and you take what’s necessary for us and we pay our self back $1.5 trillion or more. We take care of Britain, we take care of other countries that helped us, and we don’t be so stupid. You know, we’re the only country and if you look at wars over the years and I study wars, OK? My whole life is a war. You look at wars over the years. A country goes in, they conquer and they stay. We go in, we conquer, and then we leave. And we hand it to people that we don’t even know. … So, in a nutshell, we go in, we take over the second largest oil fields, and we stay.

Sensing that Trump might not have considered the implications of his proposal to essentially colonize Iraq by looting its natural resources, an incredulous O’Reilly stifled a laugh as he said, “So you’re going to take over the Iraqi oil fields?”

“I’m just saying,” O’Reilly said, “if you’re going to go into the Iraq oil fields and take them over, there’s gonna be a lot of blowback.”

Five months later, after the U.S.-led air campaign had forced Qaddafi from power in Libya — and Trump had decided not to challenge Obama for the presidency — the star of “The Apprentice” posted another YouTube clip, complaining that the administration should have waited longer to aid the Libyan rebels, to force them to agree to surrender half of the country’s oil reserves.

Speaking to Matt Lauer last week about his qualifications to be commander-in-chief, Trump argued that the rise of the Islamic State could have been prevented if only his plan to keep Iraq’s oil fields under American military control had been put into place. He was not asked to imagine how those anti-Western militants, or Iraq’s elected government, might have been expected to react to an open-ended military occupation by a foreign power intent on the illegal confiscation of their country’s natural resources.

Top photo: “No Blood for Oil” signs held by protesters against the invasion of Iraq at a demonstration in Washington on Dec. 4, 2002.