A new exhibit at the International Center of Photography combines Kim Kardashian with Sojourner Truth, CCTV, and Twitter — and lacks a sense of purpose or argument. What exactly is the point of curating an art show centered around themes of privacy and surveillance? “Public, Private, Secret,” a new exhibit at New York’s International Center of Photography, unintentionally raises this question. Unfortunately, it does not provide a lot of answers.

“Public, Private, Secret” conflates seeing, selfies, and spying, attempting to connect dots between Kim Kardashian’s photos of herself and a Trevor Paglen piece that stitches together 400 photos of a Chelsea Manning courtroom drawing. It brings together collages of found webcam footage and paparazzi photos, as well as portraits of intimacy and vulnerability, like a young girl crying alone in her room. There are vintage 35mm photos of anonymous family parties and aggregated photos of the Boston Marathon bombing manhunt. There are Sojourner Truth’s posed portraits, captioned, “I sell the shadow to support the substance.” 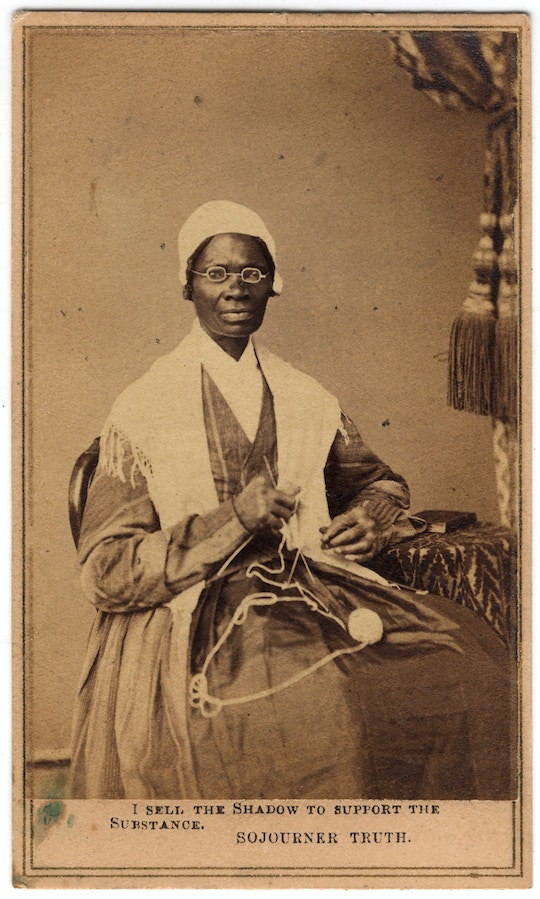 A portrait of Sojourner Truth, with the caption: “I sell the shadow to support the substance.”

These present a lot of perspectives on privacy, voyeurism, celebrity culture, state surveillance, and over-sharing. Many are thought-provoking, and much of the work is good, but it’s too much to unpack all at once. The show aims to comment on “how contemporary self-identity is now indelibly shaped by public visibility and the image we construct of ourselves for dissemination,” according to its intro text. That is an almost meaningless framework in 2016. It goes on to say the exhibit aims to “deepen our awareness of the issues that surround our contemporary sense of privacy” — but while this is a useful prompt, the curation is so vague that any overarching sense of purpose gets lost.

On the first of the show’s two floors, nearly half the space is given to an empty room of mirrors separating two galleries of video. Natalie Bookchin collages YouTube video diaries into musical, collective portraits on themes like unemployment. Martine Syms’s Lessons uses found footage to comment on black identity. They are both very compelling. But then hanging on a nearby wall is a random bit of text reminding you you’re being filmed by CCTV cameras, that this film can be used “for any purpose whatsoever in connection with this exhibit, without payment to you, in any and all media, through the universe and in perpetuity.” It seems gimmicky and misplaced, lacking imagination and depth.

The lower floor is disorienting, crammed with photos, videos, and live social media streams aiming to contextualize modern privacy issues with the history of images, all of it focused on watching and being watched. But it relies too much on the viewer to decipher the themes and home in on any sort of narrative. A 1979 Cindy Sherman photograph is hung next to a clip of the Kardashian selfies and Andy Warhol polaroids. A video of a performance artist who put herself on American Idol is amusing, but out of place. Just as a cohesive narrative around voyeurism is starting to take shape, the show sharply turns toward unidentified 1950s mugshots of Mexican prisoners. It’s interesting to think about how our historical obsession with celebrities predates the heavily mediated and data-mined word we live in now. It’s important to highlight how photography facilitates state monitoring. But the abrupt sequencing is a disservice to both points. The strangest entries are the themed screens scattered around the exhibition projecting the real-time results of random Twitter searches. “Creators” shows a stream of images programmed to aggregate accounts of selected social media stars. “The Other” aggregates searches for “seeking this person” and “trying to identify.” The results are underwhelming, and on one of my visits, the screens were actually malfunctioning. What’s worse, the pieces were curated by Mark Ghuneim, former head of Twitter’s “Curator” feature and founder of Trendrr, a social-media tracking service. It’s an uncomfortable melding of the corporate world with art, which should interrogate those systems of power.

A sense of opposition is present elsewhere, though, and it is refreshing. The exhibit’s most impressive corner contains a few pieces demonstrating how photography can serve as an intervention to surveillance, how the medium can push back against the culture of mass spying that we live in. “Facial Weaponization Suite” by Zach Blas feels like a radical inclusion, an activist project of masks that are undetectable by facial recognition technologies. The accompanying video, Facial Weaponization Communiqué: Fag Face (2012), is a fun and instructive overview of facial recognition software and its political implications. Other work in this corner of the exhibit includes Paglen’s massive and moving work on Chelsea Manning, as well as Adam Broomberg and Oliver Chanarin’s portraits made from Russian state-developed facial recognition software.

These pieces do something that all art about privacy should: They subvert the mechanisms in order to offer a creative response. They communicate what news reports cannot and help us see and feel what’s often invisible. The recent exhibition at the Whitney Museum by Laura Poitras (a co-founding editor of The Intercept) had a narrower focus on post-9/11 America and did this. It was also image-focused but felt emotional and human.

Photography and video are powerful mediums for these sorts of topics. They are inherently entwined in tools of surveillance, but they allow artists to play with and document surveillance. Photography can really make us think about the meaning of privacy, and the best work in “Public, Private, Secret” proves that to be true. But the exhibit, trying to say everything, doesn’t say much.

Top photo: “My Meds,” from the Testament series, 2009, included in the “Public, Private, Secret” exhibit at the International Center of Photography.