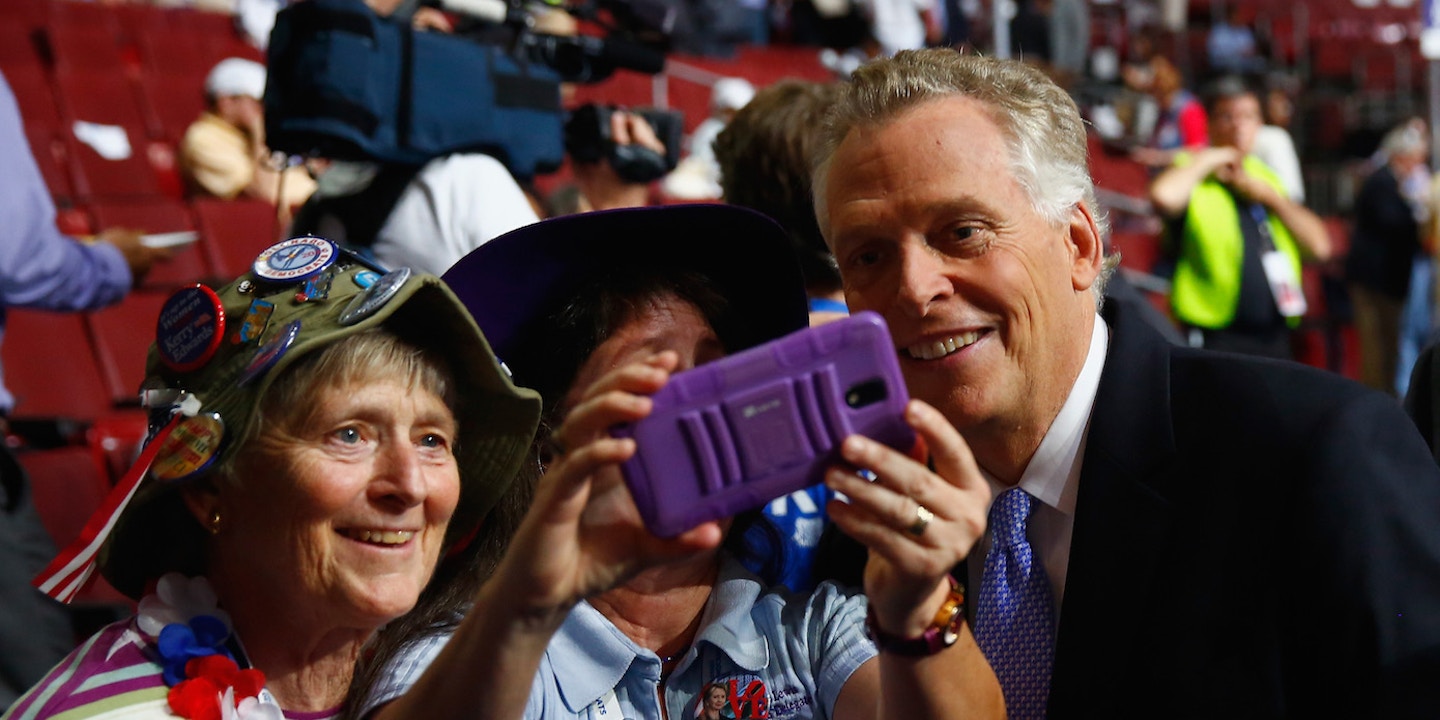 Virginia Gov. Terry McAuliffe was photographed with Willie Nelson and Willie Nelson’s marijuana this weekend in Virginia, where marijuana is illegal and where authorities arrested more than 20,000 people for marijuana last year alone.

The governor stopped by Nelson’s bus while thanking several performers at Farm Aid 2016, an annual festival meant to benefit family farmers. His spokesman, Brian Coy, told the Richmond Times-Dispatch that McAuliffe was not aware of the marijuana. McAuliffe, who opposes marijuana legalization, visited Nelson for 10 minutes or less and “had no idea” what else was on the bus, Coy said.

“He was not and still is not aware of whatever was on the table or anywhere around him and wouldn’t know marijuana or related paraphernalia if it walked up and shook his hand,” Coy said. “He’s cool, but he’s not that cool.” On the table was a 1/4-ounce can from Nelson’s cannabis line called Willie’s Reserve, as well as a grinder and an ashtray. Though the strain of the marijuana is not legible in the photo, an “S” can be made out — indicating a strain in the sativa species. The brand is grown and sold in Colorado and Washington, where it is legal. The company notes that its 100 percent recyclable cans are nitrogen-sealed for maximum freshness.

Local marijuana activists pointed to the discrepancy between McAuliffe’s interaction with Nelson and his own opposition to marijuana legalization.

“No one would like Willie Nelson to be arrested, or the governor — who unlike thousands of Virginians this year — was not arrested for sitting with another privileged white man with marijuana and paraphernalia in their presence,” Jenn Michelle Pedini, executive director of Virginia National Organization for the Reform of Marijuana Laws (NORML), told The Intercept. “And I think that’s the biggest disconnect, even if the governor wants to admit his willful ignorance to this nontoxic substance that thousands of his constituents consume on a regular basis, if he is so ignorant of it, then he probably should not be dictating policies on stuff that he doesn’t even appear to understand.”

Marijuana arrests have been concentrated disproportionately on the African-American population, the Washington Post reported last year; 47 percent of those arrested in Virginia in 2013 were black, while they are one-fifth of the state’s population. Blacks were three times as likely to get arrested for marijuana as whites.

McAuliffe has in the past voiced support for medical marijuana, citing a cancer patient who lived next door to him who used the substance to ease her pain. In 2015, he signed into law legislation that decriminalized some medical marijuana derivatives to treat epilepsy.

He has resisted decriminalization or legalization of recreational marijuana, though, saying in 2014 that he’s “not there yet.” Legislation to decriminalize marijuana possession failed to make it out of subcommittee in the state early this year.

Top photo: McAuliffe at the Democratic National Convention in July.