The Charlotte police chief released video on Saturday that showed the fatal shooting of Keith Scott this week, recorded from two angles. Bowing to demands for greater transparency into the circumstances surrounding a fatal shooting that sparked protests in Charlotte, North Carolina, this week, the city’s police department on Saturday released video of the deadly encounter recorded by its officers.

Kerr Putney, chief of the Charlotte-Mecklenburg police, told reporters that the video was recored on two police cameras — one mounted on the dashboard of a police car and the other on the uniform of an officer — after an undercover unit observed Keith Lamont Scott sitting in his car on Tuesday afternoon with marijuana and a gun.

“When you are in possession of marijuana and then you have a gun, that’s a public safety issue that our officers were going to address,” Putney said.

The fatal shooting of Keith Scott, captured on the dashcam of a Charlotte-Mecklenburg police car.

Charlotte-Mecklenburg police video from a camera mounted on the uniform of one officer.

Neither of the video clips makes it clear if Scott was, in fact, holding a gun when he was shot, but they do appear to cast doubt on previous statements from the police that he posed an imminent threat to their safety, since he appears to have been backing slowly away from his vehicle, with his arms still at his sides when he was shot.

The department offered no explanation for the fact that audio is missing from the first 25 seconds of the bodycam video, which was recorded as the officer and a colleague first attempted to break the window of Scott’s car, and a third officer then opened fire.

There's no audio for over 20 seconds in the beginning of the video. And we're to believe this isn't edited/tampered? #KeithLamontScott

The same clip then shows another officer in a red shirt approach Scott just after the shooting, and there is the sound of something skittering across the pavement as he crouches down by the dying man’s right side. There has been some speculation that the officer could have been sliding a gun away from Scott’s hand toward the curb behind him.

Putney said that more footage was recorded on other police cameras, and all of the material would likely be released later, after the completion of an independent inquiry into the fatal shooting now being carried out by North Carolina’s State Bureau of Investigation. “The footage itself,” he added, “will not create in anyone’s mind absolutely certainty as to what this case represents and what the outcome should be.”

The partial release of video failed to satisfy protesters, who rallied in Charlotte on Saturday night chanting, “Release the whole video!,” according to DaShawn Brown of WSOC-TV.

Among the other evidence released on Saturday were crime-scene photographs of what the force identified as Scott’s gun, an ankle holster, and a marijuana blunt.

BREAKING- CMPD just released this photo of the handgun #KeithScott was holding pic.twitter.com/7YXC8jpN6I

The chief reiterated that the police video, like recordings by two other witnesses, including the victim’s wife, did not offer clear visual evidence that Scott was holding a gun — as the police say — and not a book — as his family says — when he was shot. Putney insisted, however, that the handgun recovered at the scene did belong to Scott. 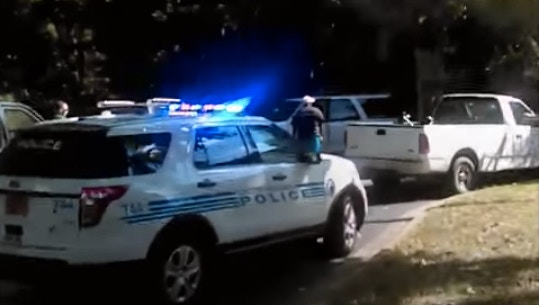 A still image of Keith Scott, wearing aqua pants and a white cap, taken from video recorded by his wife one second before he was shot and killed by a police officer in Charlotte on Tuesday.

“A lab analysis conducted of the gun crime scene investigators recovered at the scene revealed the presence of Mr. Scott’s DNA and his fingerprints on the gun,” the police department reported in a case update released with the video and photographs.

“Unfortunately, we are left with far more questions than we have answers,” Scott’s brother-in-law, Ray Dotch, told reporters after the videos were released. “It does not make sense to us how this incident resulted in the loss of life.”

“Many of you, the media,” he added, “have requested information about Mr. Scott: what kind of person he is — Was he a good father? Was he a good husband? — those issues surrounding his character. Of course he was a wonderful person; of course we loved him dearly. But that shouldn’t be the issue. We shouldn’t have to humanize him in order for him to be treated fairly. What we know and what you should know about him is that he was an American citizen who deserved better.”

The chief’s statement that the officers were trying to arrest Scott because he had committed a crime by smoking marijuana seemed absurd to some protesters, like Greg Farmer, a Charlotte resident who has been streaming live video of the demonstrations on Facebook.

Greg Farmer says #KeithLamontScott should not have died for being suspected of having marijuana and a gun. pic.twitter.com/CQnDobDwgJ

Other activists noted that North Carolina is an open-carry state, so even if Scott did have a handgun, there was no reason for officers to presume he was breaking the law, unless his race was a factor.

Some of these states been open carry longer than we've been free. It never applied to us. #charlotte

Top photo: Marks left by crime scene investigators on the asphalt where Keith Lamont Scott died on Tuesday in Charlotte.