In independent interviews with Human Rights Watch, two former detainees described a metal device that had wires with clips that would attach to the fingers, and a helmet connected to wires. 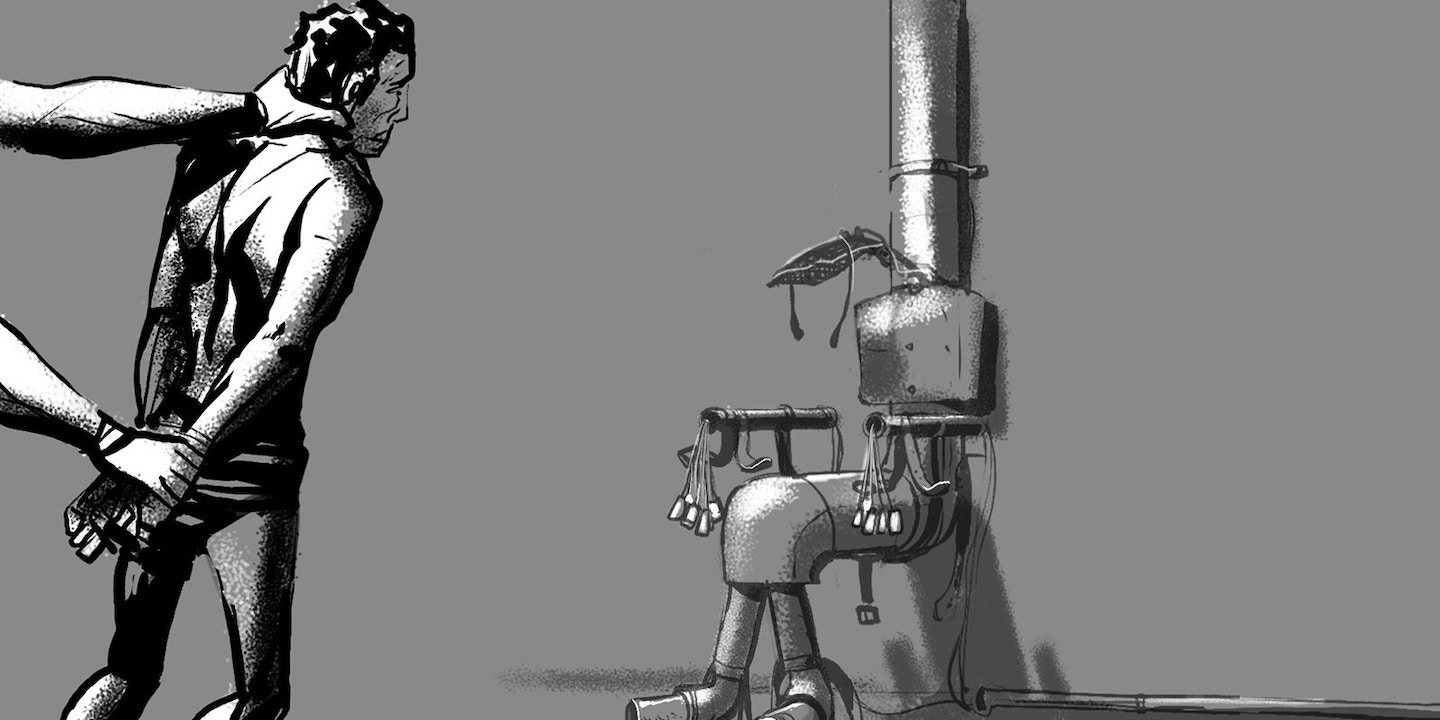 In independent interviews with Human Rights Watch in August that were made public on Monday, Ridha al-Najjar, 51, and Lufti al-Arabi al-Gharisi, 52, described a metal device that had wires with clips that would attach to the fingers, and a helmet connected to wires.

“I saw an electric box, … the chair. They said, we will torture you with electricity here,” al-Gharisi said.

Al-Gharisi said he was forced into the chair and connected to the machine, but was never actually electrocuted.

Both men also described various forms of water torture, including having their heads dunked in a bucket of water until they couldn’t breathe, waterboarding, and being strapped to a board while submerged face down in a bathtub.

This is the first time al-Najjar and al-Gharisi, both of who are Tunisian nationals, have spoken out about their time in CIA custody.

There is no mention of electric chairs in the unclassified executive summary of the Senate Intelligence Committee’s Torture Report that was released in December 2014.

“These terrifying accounts of previously unreported CIA torture methods show how little the public still knows about the U.S. torture program,” said Laura Pitter, senior national security counsel for Human Rights Watch. “The release of these two men without the U.S. providing any assistance or redress for their torture and suffering also shows how much the U.S. still needs to do to put the CIA torture program behind it.”

Both men are Tunisian citizens, and were released and repatriated to their home country last year. Neither was ever charged with a crime, and the U.S. government did not compensate either for their torture or 13 years of detention without charge.

The abuses the two men describe took place at the Salt Pit — a converted brick factory north of Kabul, Afghanistan, referred to in the Senate’s Torture Report as “Detention Site COBALT.” Many of the most sadistic abuses of the CIA program’s history took place at the facility, which al-Najjar and al-Gharisi refer to only as the “dark prison.”

CIA interrogators quoted in the declassified executive summary of the Senate report describe the prison as “a dungeon,” where detainees “cowered” when interrogators entered their cells, looking “like a dog that had been kenneled.”

Although the declassified summary did not mention electric shocks or an electric chair, it is possible that the full report — which contains a detailed account of each detainee’s interrogation — does. It remains classified by the Obama administration.

According to the Senate report’s summary, al-Najjar was the first detainee held in Detention Site Cobalt.

CIA spokesman Ryan Trapani told Human Rights Watch that the “CIA reviewed its records and found nothing to support these new claims.”

U.S. and Pakistani forces captured al-Najjar near Karachi, Pakistan, breaking into his family’s home in May 2002. According to the Senate torture report, the CIA initially thought he was Osama bin Laden’s bodyguard, but the U.S. government has never publically presented evidence for that allegation.

Al-Najjar described the day he was transferred to the “dark prison” as the “worst experience of his life”: On that day an Arab interrogator entered his cell, demanding information, and when al-Najjar could not provide it, the interrogator said “wait until you see what happens to you where we take you next. At the next place we will hang you from your anus.”

Najjar’s interrogators then doubled him over and chained his wrists to his legs. They put a bag over his head, and inserted something into his rectum, he recalled.

Two months after al-Najjar was transferred to the Salt Pit, in November 2002, Afghan detainee Gul Rahman was tortured to death there. He was dragged outside of his cell, stripped naked, beaten, and repeatedly immersed in cold water. After being put in an isolation cell overnight, he died of hypothermia. An internal CIA investigation admits that Rahman froze to death, but blames it on Rahman for rejecting his last meal, saying he denied his body “a source of fuel to keep him warm.”

In response to Rahman’s death, the CIA would release its first formal guidelines for detainee interrogation. But al-Najjar’s ordeal had begun months earlier.

Al-Najjar told Human Rights Watch that when he first arrived at the facility, he was stripped naked, thrown on a concrete floor, and doused with cold water. The same Arab interrogator that had threatened to hang him “from his anus” cocked a gun and held it to the back of his head, saying that if al-Najjar did not talk, he would kill him.

His interrogators would hang him from the ceiling for 24-hour periods, his wrists strapped to a metal bar over his head and his toes barely able to touch the ground. Often, according to al-Najjar, while he was in this position, guards would beat his legs and back with a baton, or punch him in the kidneys.

While in CIA custody, al-Najjar was kept in a dark room, and could only see when his interrogators shined a light in his face. He was fed every third day and forced to wear a diaper that was only changed every four days.

According to the Senate report, CIA officials initially recommended that interrogators utilize “Najjar’s fear for the well-being of his family to our benefit,” and said that interrogators should use “vague threats” to produce a “mind virus” that would cause al-Najjar to believe abuses would worsen until he cooperated. In August 2002, the CIA authorized an interrogation plan for al-Najjar that consisted of loud music, purposefully bad food, sleep deprivation, and hooding. But his mistreatment seems to have gone far beyond that.

On Sept. 21, 2002, less than a month into his time at the Salt Pit, CIA cables described al-Najjar as “clearly a broken man” and “on the verge of complete breakdown.” But his torture continued, and he was not transferred out of CIA custody until 2004.

U.S. and Pakistani forces captured al-Gharisi near Peshawar in Northern Pakistan in May 2002. His interrogators repeatedly accused him of having ties to al Qaeda — ties which he says he repeatedly denied to his interrogators. He would eventually be rendered to the Salt Pit and tortured for hundreds of days.

The declassified summary of the Senate’s report only says al-Gharisi was tortured without authorization from CIA headquarters and underwent at least two 48-hour stretches of sleep deprivation.

But al-Gharisi told Human Right Watch he suffered many of the same abuses as al-Najjar, including sleep deprivation, water torture, being threatened with an electric chair, and being hung from a rod while beaten with batons. During his interview, al-Gharisi pointed to spots where his teeth had been knocked out.

Al-Gharisi was transferred into military custody sometime in late 2003.

During the more than 10 years that the two men were in military custody, the International Justice Network filed a petition of habeas corpus in a U.S. court, requesting information on why they had been detained. The Justice Department argued that the U.S. military prison in Bagram was beyond the court’s jurisdiction, and the petition was ultimately denied.

During his time in CIA custody, al-Najjar claims to have suffered broken bones, broken hips, a broken ankle, damaged knees and a damaged jaw. He received treatment after being transferred into U.S. military custody, but declined to have arthroscopic surgery on his knee, worried that it would make it worse. A medical adviser for Physicians for Human Rights examined x-rays of al-Najjar’s leg, taken after he was released last year and confirmed that his ankle had been broken and that he had experience knee trauma.

Today, al-Najjar and al-Gharisi are dependent on their families, unable to find work due to lingering physical and psychological trauma, Human Right Watch said. Al-Najjar says he lives with chronic pain in his ankle, hips, and backbone, and that he has kidney pain, a hernia, and blood in his stool. Al-Gharisi says he has chronic pain, and blurred vision. He says he does not see a doctor, because he cannot afford one.

The U.S. has not compensated any of the 119 detainees held in CIA custody for mistreatment.

The full Senate torture report — reading in at over 6,000 pages — remains the most authoritative history of the CIA torture program to date. The executive summary was declassified over a year ago, but the CIA is still fighting to bury the full report. Apparently averse to learning lessons from the past, the Obama administration refuses to open any of the copies in its possession.

But anti-torture laws did not stop the Bush administration. And following the Obama administration’s failure to prosecute any officials responsible for their crimes, torture remains an applause line for one of the U.S.’s major political parties.

Illustration based on statements by the two former detainees.