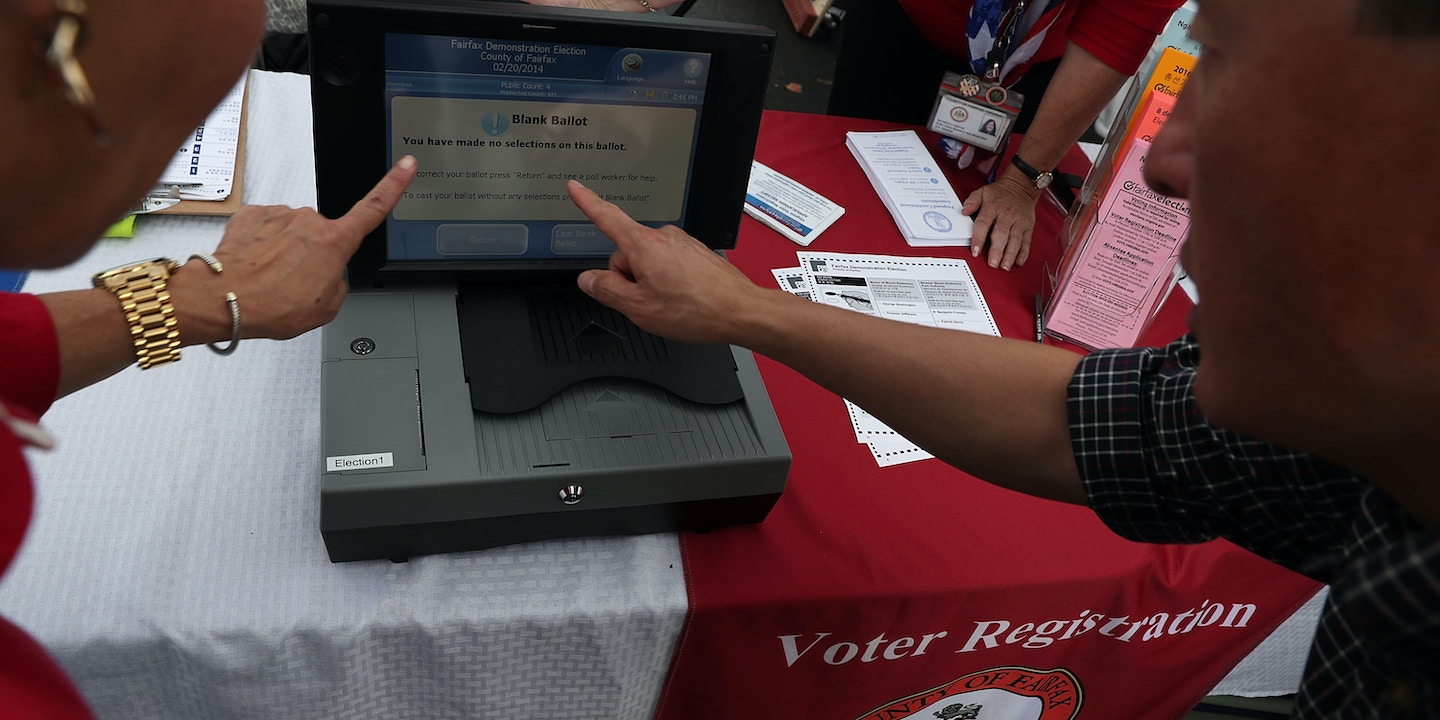 State police raided the offices of Indiana’s largest voter registration operation Tuesday morning, a dramatic step in a fast-developing investigation that police say is about voter fraud and election activists say amounts to a Republican-backed attack on access to the ballot in the Hoosier state.

According to organizers, nearly a dozen police entered the Indianapolis offices of the Indiana Voter Registration Project with a search warrant and seized multiple computers, the personal cellphones of employees, and paperwork relating to the group’s get-out-the-vote operations in the state.

The group alleges that police told a worker she was not allowed to film the raid and attempted to block workers from access to counsel, said Jeff Macey, the attorney representing the IVRP. He called me from his car parked across the street from the voting offices he said he was unable to enter.

With its headquarters stripped of essential equipment, the registration drive’s future is suddenly uncertain.

The Washington, D.C.-based liberal-leaning Patriot Majority oversees the Indiana voting drive. “At the end of the day, when they find that the organization has done nothing wrong,” said Patriot Majority head Craig Varoga, “they will still have killed the ability of this organization to register voters.”

The state’s investigation into the IVRP went public in mid-September when Indiana’s Republican Secretary of State Connie Lawson announced that at least 10 of the group’s voter registration applications had been forged. In a letter referring to the IVRP that Lawson sent to elections administrators in all of the state’s 92 counties, she warned that “nefarious actors are operating here in Indiana,” and instructed them to “please contact the Indiana State Police Special Investigations” if they receive registration forms submitted by the liberal-backed group.

The group retorted that it had already submitted tens of thousands of registrations in Indiana this year and that by zeroing in on just a handful of problematic applications the state appeared to be criminalizing a basic feature of voter registration itself, which inevitably involves submitting paperwork that contains imperfections.

Varoga said that in Indiana, members of a voter registration drive cannot legally choose to discard applications; even if something appears faulty, the group must submit the application for the state to review. In recent years, Patriot Majority has conducted registration drives in 12 states, said Varoga, who asserted that it is a matter of routine practice for elections administrators to work with get-out-the-vote activists to discuss and solve problems with faulty applications.

According to the Indiana State Police, which is leading the investigation into IVRP, the irregularities in the group’s applications do not appear to be innocent errors. “From what we found in the initial 10 that we looked at, and the reason we’re continuing to look, is that we found instances of totally fictitious information,” Dave Bursten, the chief public information officer for the Indiana State Police, told me last week. “People that didn’t exist with addresses that didn’t exist. On others, real people have had their registration cards updated with incorrect information, which would potentially disenfranchise them from being able to cast their vote.”

Bursten denied Tuesday that police had blocked IVRP lawyer Macey from witnessing the police’s evidence gathering. “Our detective told him that clearly he had the right to be in there and remain there,” Bursten said, adding that the lead investigator at the site told Macey that if he did want to exercise his right to witness the raid, he himself might become part of the investigation and thus hampered from most effectively representing his clients. “The decision was entirely that attorney’s,” Bursten said.

Macey disputed that version of events. “The trooper informed me that I was not allowed into the office during the raid,” Macey said in an email. “He did mention that I would be a witness as well, but that was in addition to informing me I was not allowed in.”

As for the allegations that police prevented one employee from filming the police and another from calling Macey, Bursten said that the police had come to collect cellphones and did not want to give targets of the investigation time to delete evidence that might be contained within the devices.

The state’s investigation covers nine counties. Last Thursday it was reported that state police copied more than 250 suspicious registrations from an IVRP office in central Indiana. In a statement released on Tuesday, state police said they believe the number of suspicious IVRF registrations could reach into the hundreds and underscored the nuanced nature of their investigation, urging people to not expect immediate answers.

“An investigation of this nature is complex, time consuming and is expected to continue for several more weeks or months,” said the police statement.

Varoga said that the investigation has already stifled the activity of his group. He said the Patriot Majority would file a complaint with the Department of Justice’s Civil Rights Division against the state for voting rights violations. “They’re violating all manner of legal standards,” said Varoga. “I have certainly never seen anything like this.”

Top photo: Demonstration of a voting machine in Virginia.