A Prison Strike Organizer Suffers Retaliation for Speaking With Journalists

A prisoner at Ohio State Penitentiary says he is facing disciplinary action for participating in an NPR interview about the nationwide prison strike. A prisoner at Ohio State Penitentiary says he is facing disciplinary action for participating in an NPR interview about the nationwide prison strike that started on September 9.

Nearly a month after inmates embarked on the largest prison strike in the country’s history, the media and the public continue to know little about where and how the action played out, and even less about officials’ retaliation against striking prisoners.

As The Intercept has reported, that’s no coincidence. Prison officials regularly go to great lengths to control the information leaving their institutions, and this strike has proven no exception, despite gradually developing media interest in the protest.

Undeterred by challenges, prison activists have succeeded in releasing sporadic updates on the strike as it spread across the country, and some of them have even used a combination of contraband cellphones and their regularly allotted phone time to speak with media organizations.

But those calls come at a cost.

In an incident suggesting just how difficult and risky it can be for prisoners to communicate with the outside, and with journalists in particular, Siddique Hasan, a prison activist sentenced to death for his role in a 1993 prison uprising, said he was “written up” by a prison investigator for his participation in a September 28 episode of the NPR show “On Point with Tom Ashbrook.”

Hasan is expected to go before the prison’s Rules Infraction Board this week, charged with “unauthorized use of telephone or violation of mail and visiting rules.” He plans to plead guilty to the accusation because he contests its legitimacy, he told The Intercept.

The prison’s warden and Michael Wylie, the prison investigator who first approached Hasan about the interview, did not respond to a request for comment, but Laura Gardner, the warden’s assistant, wrote in an email to The Intercept that “per DRC’s media policy, telephone media interviews are not permitted nor are media interview with Level 5 inmates.”

Hasan told The Intercept that Wylie warned him against presenting himself as an “organizer” and a member of the Free Ohio Movement — a peaceful prisoners’ rights organization he helped found. Hasan also said Wylie told him that he was not allowed to speak on radio programs or do interviews with the media, even though that restriction was previously limited to media conducting on-camera interviews on site or reporters bringing in recording equipment during visits. The department of corrections did not respond to a request for comment.

“Since I am not a coward or a passive ‘nigger’ that takes unconstitutional orders from my oppressive captors, I have no intention of passively submitting to such a threat,” Hasan wrote in a message to The Intercept, sent through a monitored prison communication service. “I expect to be put in isolation sometime soon, found guilty by their kangaroo court, and then given more phone restrictions in order to excommunicate me from the media and the outside world. If so, come what may and let the wind blow wherever, for I will never capitulate to their unconstitutional demand and this new form of harassment.”

A Pattern of Retaliation

It’s hardly the first time Hasan has faced retaliation for his communications with the outside. But while he regularly speaks to supporters, reporters, and even conferences and college campuses — about anything from his faith to prison resistance and the movement for black lives — he has faced increased scrutiny in the weeks leading up to and following the September 9 prison strike.

Last August, an imam who leads religious services at the prison, with whom Hasan has had theological disagreements in the past, accused him of making threats against the institution. Incidentally, he alleged that those comments dated to several days earlier, on July 22, the same day this reporter visited Hasan in prison. In the investigation that followed, Hasan was accused of “plotting to blow up buildings” on September 9 — the day of the planned prison strike — and sent to solitary confinement for over a month.

But his battle for media access dates further back, to a 2013 lawsuit filed by the ACLU of Ohio on behalf of a handful of journalists, Hasan, and four other prisoners, accusing the Ohio Department of Rehabilitation and Correction of violating the prisoners’ constitutionally protected right to media access.

That lawsuit itself — which remains pending — came in response to media interest in Hasan and the other prisoners on the occasion of the 20th anniversary of the Lucasville riot, which they were accused of leading. Nine prisoners and one guard were killed during the 11-day uprising. Hasan and the others cited in the ACLU lawsuit — known as the “Lucasville Five” — had spent much of the prior two decades in solitary confinement and were denied the face-to-face interviews normally granted to other death row inmates. (In 2011, Hasan and two other prisoners also went on a 13-day hunger strike protesting the fact that they were placed on the most restrictive level of isolation for 19 years. Hasan remains on “Level 5A,” an additional designation created by the penitentiary’s former warden in response to that protest. 5A is the most restrictive level of isolation, but after intense public pressure it was eased up to allow for some visits and limited congregate recreational time.) 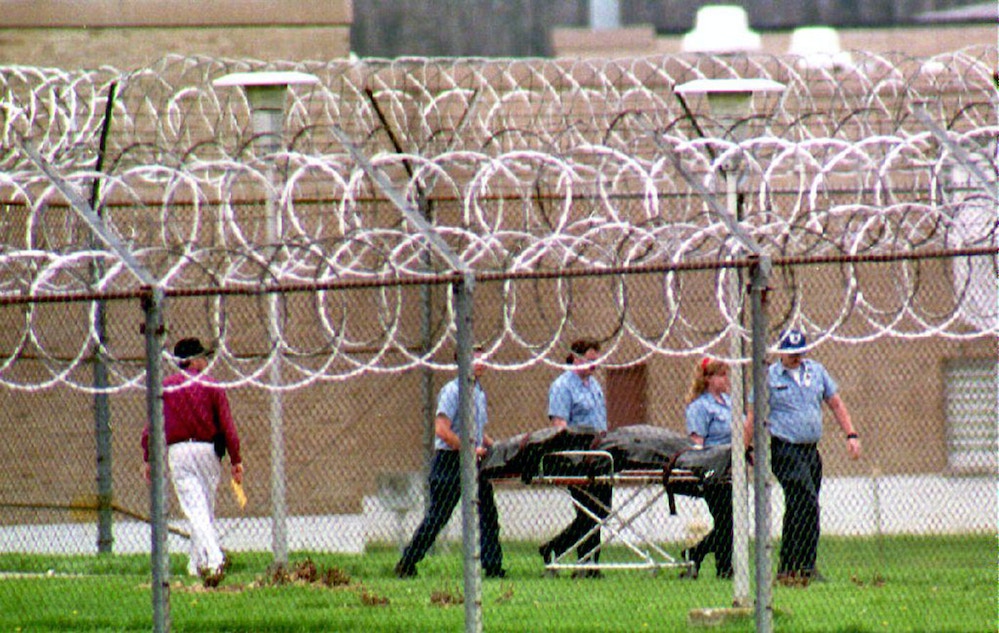 Paramedics remove the body of a prison guard held hostage at the Southern Ohio Correctional Facility in Lucasville, Ohio, on April 15, 1993.

The Lucasville Five and their supporters have always claimed they are innocent of the crimes for which they have been condemned to death, and that the censorship around them was a deliberate attempt to stonewall any public scrutiny of the 1993 uprising and the state’s alleged misconduct during the events themselves and in the trials that followed.

“It’s not hard to see that their actions have very little to do with security and everything to do with silencing an uncomfortable conversation about the Lucasville uprising,” the ACLU of Ohio wrote in a statement about the lawsuit. “These prisoners are complicated characters, and the Lucasville uprising is a complex story. Hiding these complexities behind a wall of censorship will not make them go away.”

But while the general public has largely forgotten about the Lucasville uprising, these days Hasan is mostly interested in amplifying the struggle of fellow prisoners, and he talks frequently about prison conditions, as well as the connections between life inside and whatever news he is able to get about the social justice movement he knows is growing outside. The nearly 50 prisoners that joined the September 9 strike at the Ohio State Penitentiary did so primarily to protest insufficient and “foul” food, and to demand slots in the Plexiglas windows that separate them from family during non-contact visits, so they may hold hands, Hasan said.

This week and over the weekend, before facing review for unauthorized use of his phone time, Hasan spoke to The Intercept in monitored phone calls and messages, expecting communication access to be cut again soon.

“Needless to say, I will fight back,” he said. “Despite the latest development to keep me off the airwaves, I am doing well and remain unbowed, unbroken.”