Clinton, who was once on Wal-Mart’s board, said the stores give some Americans the chance to “go and look” at “products that never were readily available in a lot of those places before.” 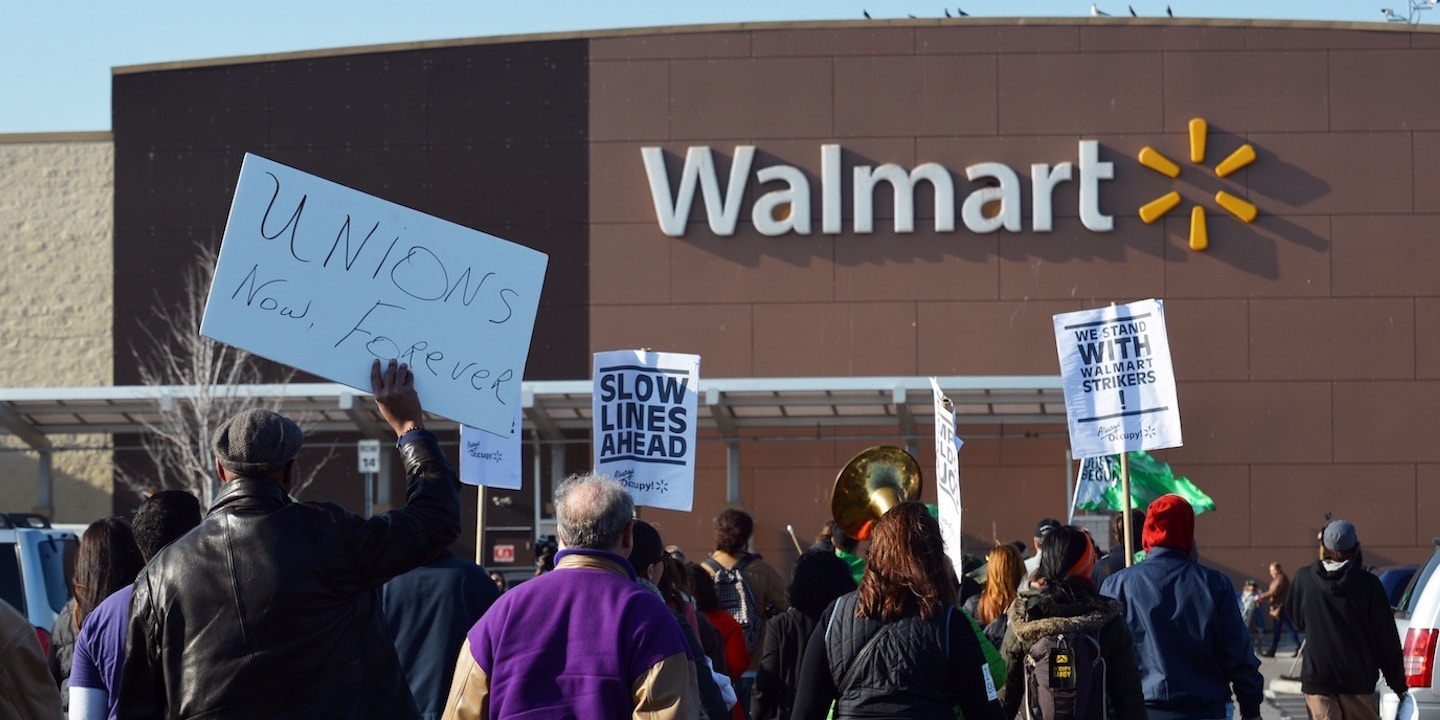 When a group of labor activists demanded in 2014 that Hillary Clinton use her influence with Wal-Mart — where she sat on the board of directors for six years — to raise workers’ wages, Clinton’s top aides turned to Wal-Mart’s former top lobbyist for advice on how to respond.

And in a series of highly paid appearances after leaving the State Department, Clinton praised the company’s practices and spoke fondly of its founder in speeches that were kept secret from the public.

Wal-Mart, America’s largest private employer, has become a top target of progressives because of its aggressive union-busting and notoriously low wages and lack of benefits. But emails documenting a continued warm relationship between Clinton and the massive retailer are among thousands posted by Wikileaks over the past week from Hillary Clinton campaign chairman John Podesta’s gmail account.

One emailed document is an 80-page list prepared by Clinton’s own research department, detailing the most potentially damaging quotes from the secret speeches. The last four pages are devoted to Wal-Mart.

During a November 2013 speech at an event sponsored by the Canadian pharmacy firm London Drugs, Clinton seemed to suggest that Wal-Mart stores were particularly good for people who lived in the nation’s less cosmopolitan areas. “Those stores — you know, you don’t have to agree with everything Wal-Mart does, I don’t — but those stores served a real purpose, not only for employment and low cost goods, but they did become a way for people who wanted to see what else was available to them could go and look, products that never were readily available in a lot of those places before.”

She continued: “So this spirit of community that I think is absolutely essential to the maintenance of our democracy, our freedom, our strength, is alive and well across North America, particularly among young people.”

Clinton’s suggestion that Wal-Mart is somehow helping foster community stands in contrast with how the retail giant has devastated local and family businesses as it has expanded across the country. The chain’s use of cheap Chinese-produced products has also sucked money out of local communities and helped expand the U.S. trade deficit. The Economic Policy Institute estimates that the “Wal-Mart-based trade deficit with China alone eliminated or displaced over 400,000 U.S. jobs between 2001 and 2013.”

The one group that has really benefited from Wal-Mart is the heirs of its late founder, Sam Walton. Today, the Walton family is worth $130 billion. Altogether, they are wealthier than the bottom 40 percent of Americans combined.

Clinton repeatedly told audiences at her speeches the same story about being appointed to Wal-Mart’s Board of Directors by founder Sam Walton. She told the November 2013 pharmaceutical event that “in the late 1980s, probably about ‘86, he called me one day and he goes, Hillary Clinton, my wife and my daughter think I need a woman on the Board and I can’t think of anybody else. I said, Well, you sure know how to flatter me, don’t you.”

She also expressed disappointment that Wal-Mart abandoned its plans to build retail stores throughout India because it wouldn’t be able to meet an Indian government requirement that it buy 30 percent of its products from small and medium-sized Indian businesses.

“I think that if India can ever get its regulatory system straightened out, you know, we have gone back and forth on opening up to retailers, large, multinational retailers. Wal-Mart just withdrew and it is a real shame and because one of the things Wal-Mart promised to do was to help set up the supply chain for agricultural products to actually get to the end user consumer,” she said.

The hacked emails include a fairly extensive back-and forth about the request Clinton got to pressure Wal-Mart to raise wages.

In the spring of 2014, a group of activists, led by consumer advocate Ralph Nader and political scientist Adolph Reed, called on Clinton to ask Wal-Mart to raise wages. The activists pointed to both Clinton’s time on Wal-Mart’s board as well as her history of advocacy for women, and called on her to use her voice for female Wal-Mart employees, whom they noted held the majority of low-wage positions at the chain.

Unsure of how to respond, Clinton’s aides reached out to Leslie Dach, who until 2013 was Wal-Mart’s top lobbyist. He counseled them to marginalize Nader:

The Intercept reached out to some of the signatories of Nader’s letter to ask if they ever heard back from Clinton’s team. “Nope,” Reed responded in an email. Dach continues to be a close confidant; in 2016, the Clinton campaign tapped him for the role of recruiting Republican support for the campaign.

Top photo: Protesters in November 2012 calling on Wal-Mart to improve working conditions and stop cracking down on unions in Seaucus, New Jersey.