Justice Department data collected by TRAC show that the feds are on pace to prosecute 88 cases that came from EPA referrals this year, compared to 182 in 2011. Fewer polluters were criminally prosecuted based on referrals from the Environmental Protection Agency this year than in any year in the past two decades, including during the George W. Bush administration.

Justice Department data collected by Syracuse University’s Transactional Records Access Clearinghouse (TRAC) show that the feds are on pace to prosecute 88 cases that came from EPA referrals this year, compared to 182 in 2011.

The reason, former insiders say, is obvious. “The EPA is a piñata,” said Doug Parker, who left a position as head of the agency’s Criminal Investigation Division in April after working more than two decades as a special agent for the agency. “There was a material effort to downplay criminal enforcement, because they thought it would exacerbate tensions.”

For Republicans and their donor base, the need to reduce the size and scope of the EPA, if not kill it altogether, has become a top priority. The party’s 2016 platform promised to “transform the EPA into an independent bipartisan commission,” shifting responsibility for environmental regulation to the states. The political pressure has meant stagnation and reductions in the EPA’s budget, causing the agency to bleed nearly 2,000 people over the last five years. The workforce hasn’t been so small since 1989.

EPA spokesperson Nick Conger said it’s a matter of money. “The reality of budget cuts means we must be strategic in how we use our resources, which may result in doing fewer lower priority cases. This does not reflect a lessening of our commitment to enforcement, but our decision to continue to do what’s necessary to tackle the largest, highest impact cases.”

But that approach appears to fall short of the requirement in the Pollution Prosecution Act, passed under George H.W. Bush, that the EPA employ 200 criminal investigators by 1995. The agency currently has only 164. “We’ve had to close cases, because we didn’t have resources to take them,” Parker said. 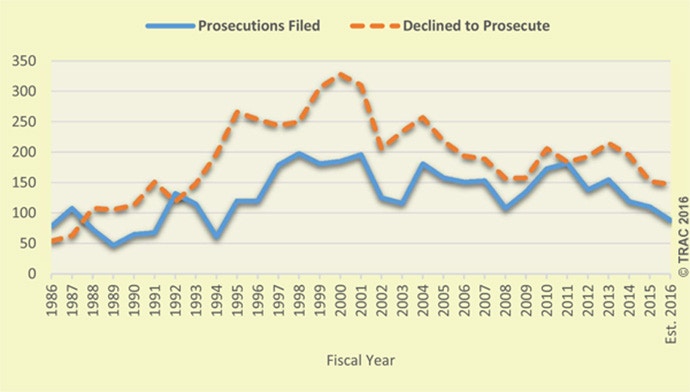 A chart tracking prosecutions filed based on EPA referrals (the solid blue line) and EPA-referred cases that the Justice Department did not prosecute (the dotted orange line).

Jeff Ruch, head of Public Employees for Environmental Responsibility, waved away all the excuses. “If the White House valued enforcement it would happen,” he said.

Instead, as the workforce shrunk, the agency shifted to what it called “Next Generation Compliance,” meaning that corporations increasingly monitor themselves, using technology to deliver compliance information to the EPA. The agency’s strategic plan for 2014 to 2018 admitted that this new approach would cut the volume of waste cleaned up because of agency enforcement actions. The plan meant putting more agents on the most egregious cases, such as the Deepwater Horizon oil spill, rather than prosecuting numerous minor cases.

Parker said his department’s caseload included dozens of deaths and serious bodily injuries. “These were profound pesticide poisonings where people will never walk or move again. There were people who lost limbs. That doesn’t even account for people that might have long term exposure you’re not aware of,” he said.

Ruch hopes the next administration will reorient the agency’s strategy. “We need a return to basic, core functions of enforcement and rulemaking,” he said.

Hillary Clinton has pledged to enact strong standards for reducing methane emissions and to fight for Obama’s central climate change coping strategy, the Clean Power Plan, which is currently being challenged in court. She’s been less clear on how she’ll support EPA enforcement efforts.

Donald Trump has promised to “refocus the EPA on its core mission of ensuring clean air and clean, safe drinking water for all Americans.” He no longer calls for eliminating the EPA entirely, but he does call for it to abandon polices central to the Obama administration’s climate change strategy. His EPA transition team head would be Myron Ebell, director of the Center for Energy and Environment at the Competitive Enterprise Institute and a well-known climate change denier.