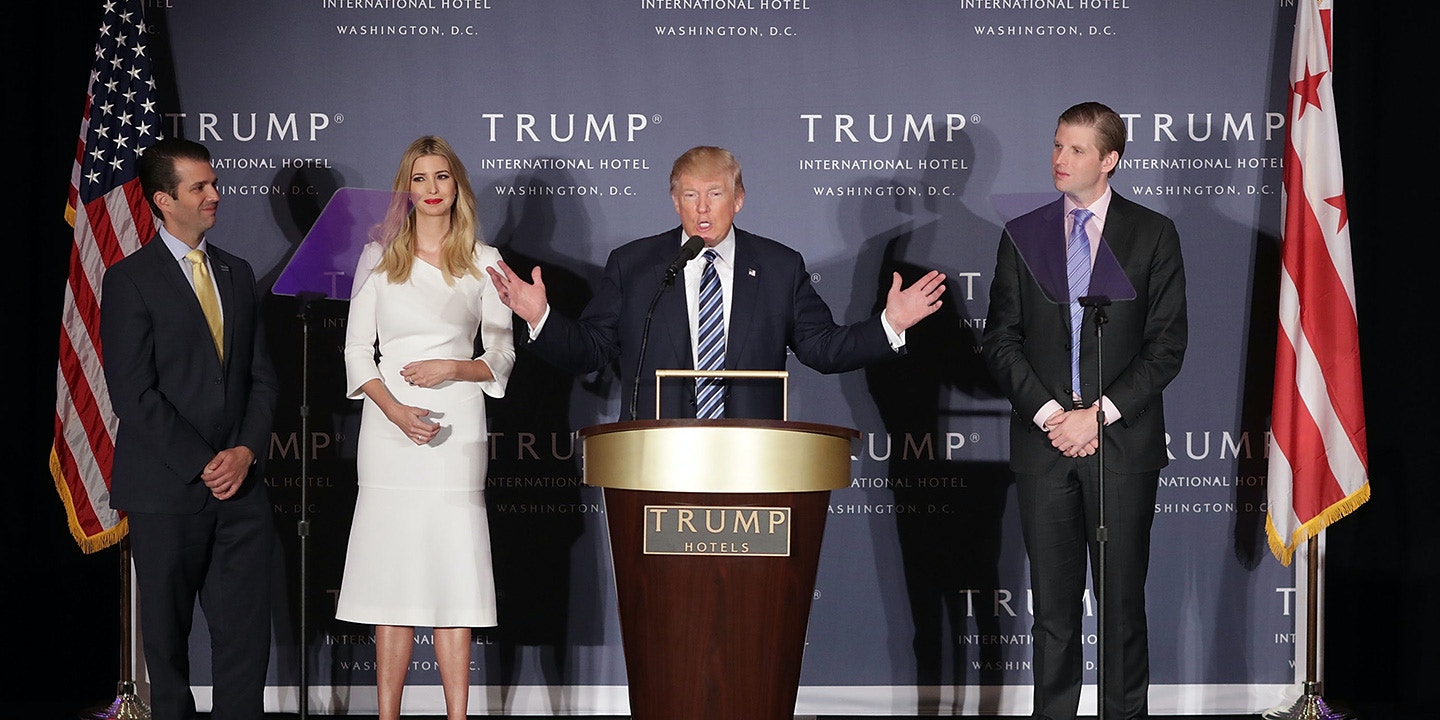 On Wednesday morning, Donald Trump appeared at an unusual hybrid event in Washington, part campaign rally, part ceremonial ribbon cutting, part televised infomercial pushing his new Trump International Hotel, now open at the Old Post Office, two blocks away from the White House. Should Trump fail to win the White House on November 8, the ribbon-cutting offered some clues about his future. His apparent strategy is to liquidate the bonanza of free attention surrounding his candidacy into capital that he can use to expand his business ventures and personal brand.

The event was open to some 400 media and 300 “VIP” guests, but not the public. It offered some bizarre juxtapositions — a private commercial enterprise in a formerly public space, supported by the the mass publicity that is usually attached to a presidential campaign, not the opening of a luxury hotel. Secret Service agents and police guided 300 guests through a metal detector, beside a stack of booklets touting the hotel’s spa, in-room Nespresso machines, and the 860 square-foot “Ivanka Suite.”

The closest thing to celebrities at the event were Newt Gingrich, the former House speaker, and Sen. Jeff Sessions, R-Ala. “People change, polls change,” said Sessions, when asked about the election. Ivanka Trump bragged that the Trump family had taken possession of one of capital’s crown jewels. “With the exception of 1600 Pennsylvania Avenue, she said, “this is the most coveted piece of real estate in Washington, D.C.” Republican presidential nominee Donald Trump and his family cut the ribbon at the new Trump International Hotel on Oct. 26, 2016 in Washington, D.C.

Trump’s brief speech was delivered in the hotel’s “Presidential Ballroom” between two gilded easels with the day’s mantra: “Under budget, ahead of schedule.” Trump took the stage 28 minutes late. In a slightly hoarse voice, he explained how building a hotel was a lot like running the country. He said it was a “metaphor,” although he did not say whether that metaphor extended to overpromising, massive borrowing, or slapping one’s name on projects that one does not actually own. Trump arranged for $200 million in renovations for the Old Post Office. His 2015 financial disclosure form values his stake in the hotel at between $5 million and $25 million; his 2016 form values it at $50 million or more.

Trump did spend some time lamenting the state of the country: “Everything our country touches, it breaks. … Our military is so degraded. … The tax code is broken. … The education system is broken.” He seemed to be of two minds about the Old Post Office itself, a massive and ornate building that the Trump Organization is leasing from the federal government for $3 million a year. Trump castigated the federal government for allowing the structure to fall into disrepair, even as he praised the “great, great professionals, amazing professionals” at the General Services Administration. An investigation by BuzzFeed showed that the agency awarded Trump the contract to develop the site despite his failure to make good on assurances that he would be partnering with a $28 billion real estate fund and an architect familiar with the site.

The ribbon-cutting itself, held in the hotel’s atrium, seemed to have been conceived as a demonstration of Trump’s appeal to the multiracial service industry workforce in his employ. The faces of Trump hotel workers glowed as they presented his family with ceremonial shears. “I’ve never seen scissors that look so beautiful!” Trump exclaimed. Two more workers held the ends of a long red ribbon so the Trump family could make their ceremonial cuts. Eric, Donald, and Donald Jr. held onto their pieces. Melania, Tiffany, and Ivanka let theirs fall to the floor.

Outside, Sam Curreri, a member of the International Brotherhood of Electrical Workers from Baltimore, was holding a sign in protest of Trump’s treatment of unionized workers at his Las Vegas hotel. “The jobs he’s creating are short-term,” Curreri said of Trump. As for the campaign, “he’s carried himself terribly. Unprofessionally. He’s nowhere near presidential.”