In a Black Precinct in Georgia, Simply Finding the Polling Place Was a Challenge

African-American voters in Georgia contended with misinformation and an intimidating police presence at the polls. Sheldon Brown went to three different places before he was able to cast his ballot at a Baptist church in a scarcely populated part of Macon-Bibb, a majority black county 90 miles south of Atlanta. Willard Wash, a toothless 67-year-old, showed up at the same poll, was told that was the wrong place, and left the parking lot still confused about where to try next.

“I didn’t receive a letter telling me where I was supposed to vote at, I’ve just been trying to figure it out,” Wash, a lifelong resident of the county, told me as he walked out of the poll. “They don’t tell you.”

Wash, who said he never once missed an election, said he would try all precincts he knew of — even if he had to go to five or six of them. “I just want to vote, that’s all,” he said. “Even if I have to drive all over, I’m going to vote.”

That was a common refrain outside this polling site and across the county and state.

Sierra Scott, a 22-year-old, showed up at the same poll with her young daughter and her father, whose car was decorated with “Women for Obama” and “Hillary” stickers. He was allowed to vote, but she wasn’t, because even though they lived in the same place, they were registered for different voting sites. Scott said she would try the precinct poll workers referred them to, but she was frustrated. “People that don’t have the patience to go back and forth, they’ll just say, forget it.” Another young man who left the same precinct said he, too, was told that was the wrong place, but that he was allowed to cast a provisional ballot instead, an option that seemed to be offered inconsistently to voters who were turned away for being at the wrong location. Still, he told me that was all he had to do — and seemed not to understand when I tried to explain that he would actually need to follow up with election officials to verify his address in order for his vote to be counted.

As many headed to the polls across the country fearing voter harassment and intimidation (some incidents of which were in fact reported), a much more prominent narrative was widespread confusion, with several people being told they were not registered or not in the right place. In some states, the problem was compounded by long lines and machine failures, according to observers with the Lawyers’ Committee’s Election Protection program — a nationwide, nonpartisan monitoring effort that dispatched thousands of independent monitors to the polls. In Georgia, the most common complaints were widespread misinformation as well as police at the polls.

Across the country, “voters were confused because of changes to their polling places and a lack of accurate information provided to them by their state officials,” Sherrilyn Ifill, president of the NAACP Legal Defense and Educational Fund, one of the groups behind the Election Protection program, said in a statement. “The bottom line is that nobody who has the right to vote and wants to make their voice heard should be denied that opportunity. Even one case of disfranchisement is too many.”

Civil rights groups have long warned against the impact of voter suppression on this presidential election — the first since the Supreme Court struck down a section of the 1965 Voting Rights Act that put several states with a history of discrimination, including Georgia, under federal oversight. Whether obstacles to the polls contributed to the outcome will be subject of debate in the next days and weeks, but nonpartisan monitors with the Election Protection program said that voting was just too difficult in some places. 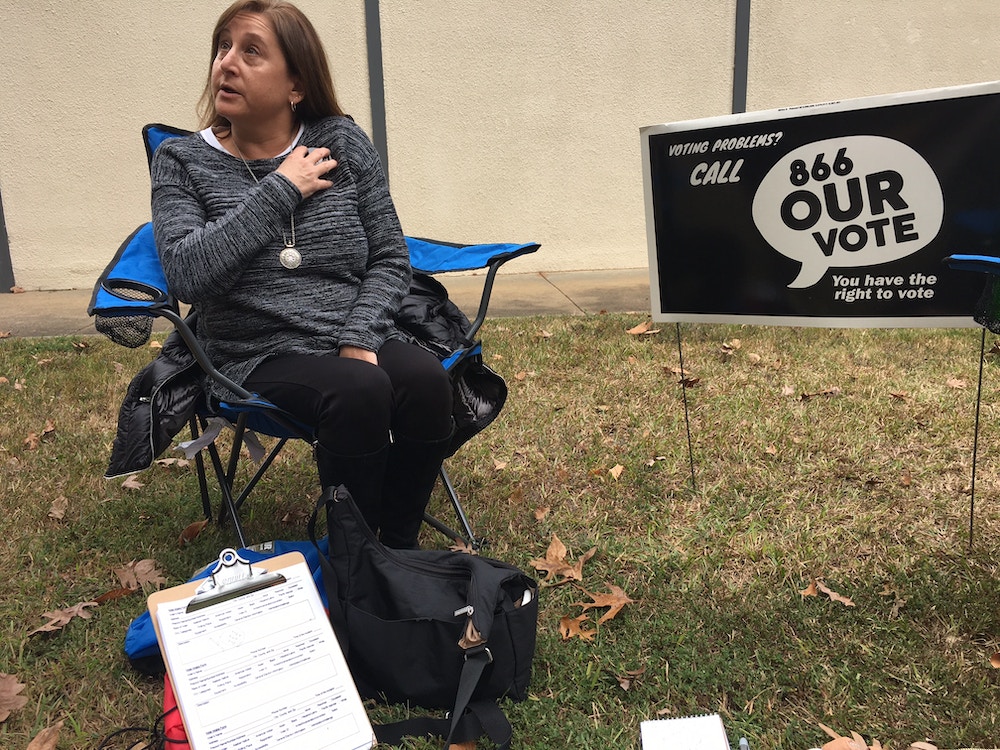 Photo: Alice Speri for The Intercept

Dennis coordinated a few dozen volunteer monitors out of another church in Macon, dispatching teams to cover 20 of the county’s voting precincts and fielding constant calls about people being turned away, or sheriff’s deputies showing up at the polls.

“It’s been a very busy morning,” she said, driving to a poll where election monitors reported being harassed. “And the thing with Georgia is that there are things happening all over, and it’s so spread out. It’s really hard to monitor.”

The call in question came from a precinct at a clubhouse, in a slightly wealthier, and whiter, section of the county. To get to that poll, one had to drive into a gated community — past a guard’s booth and several “no trespassing” signs and security cameras. “Definitely a red flag,” Dennis said exasperated. “We don’t want polls inside gated communities.”

At the site, independent monitors had been verbally attacked by self-identified GOP poll observers, who had told them they had to leave because the Election Protection sign — a hotline number in white characters over a black background — “looked like ISIS,” Lori Jassen, one of the two monitors at the polls, told me.

As the exchange grew more heated, voters defended the independent monitors, pulling out their phones to film the interaction and telling the GOP observers that they were being “retarded” and “sexist,” Jassen said. (“Damn straight I’m sexist,” she said one of them replied.)

Jassen said things eventually calmed down, but the atmosphere remained tense through her shift. A man wearing a Make America Great Again hat was told to remove it before entering the polls, but later a couple walked out wearing “I voted” stickers over “Hillary for prison” shirts.

Another self-declared “official poll monitor” kept a close watch on the Election Protection observers through the day. He refused to say whether he was affiliated with any group, or much else about his presence there, but told me he was a former chief of police and kept probing suspiciously about the independent monitors’ reasons for being at this poll.

A few steps away from the poll, a uniformed sheriff’s deputy stood by his car for much of the day — as others did at sites throughout the county, sometimes defending Election Protection volunteers and other times telling them they needed to leave.

That presence in itself is problematic, Gwen Wetsbrooks, the president of the local NAACP chapter, told me as she frantically coordinated rides to the polls for voters without cars. “At one site they had four police officers — we just want to make sure they’re not there for intimidation.”

Law enforcement’s involvement in the election has been a contentious issue in this county for several months now. Earlier this year, after a gym normally used for voting underwent renovations, the local election board voted to move that precinct inside the local sheriff’s office — a blatant act of voter intimidation, according to Westbrooks.

“The relationship that particular community has with law enforcement is not a good relationship,” she said, noting that people of color had a long and conflicted history with the Macon police department, which recently merged with the sheriff’s office. “People just don’t forget. There was a lot of racial profiling. You could just be walking and they’d stop you.”

When the election board ignored residents’ protests, Westbrooks took her fight to the state, and with the help of Atlanta-based activists helped gather signatures from 40 percent of local voters. That’s twice as many as those required to contest a polling location — “because we wanted to avoid the bullshit of them invalidating their signatures,” said Nse Ufot, the director of the New Georgia Project, who helped with the effort.

Ufot added that when she spoke to the Board of Elections they advised against seeking a poll change. “It makes it seem that you think that black people are criminal,” she said they told her. “Their idea was, you shouldn’t have a problem voting in a sheriff’s station if you’re not a criminal.”

The residents eventually prevailed, and the precinct was moved to a church less than a block away from the sheriff’s office. 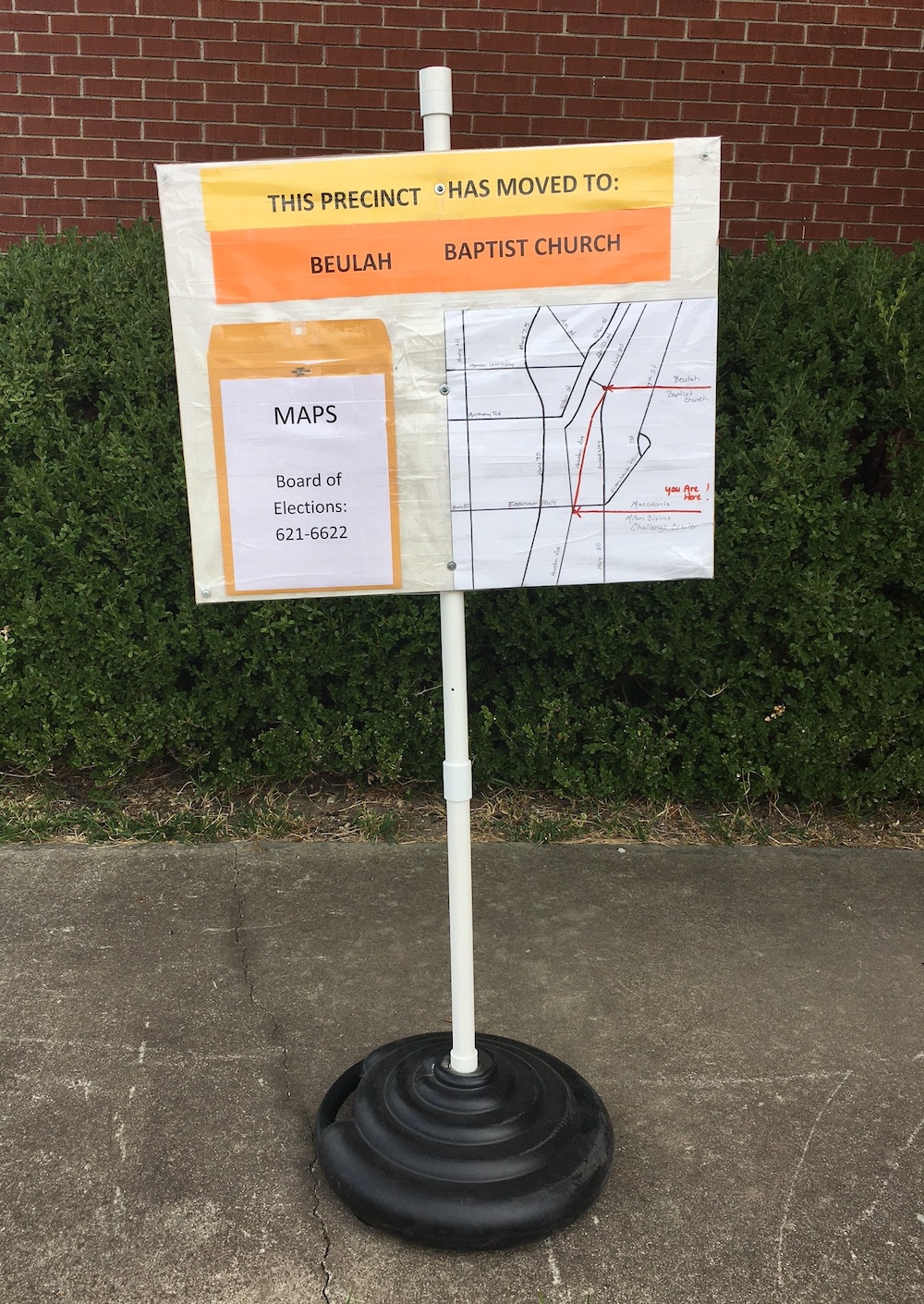 An unofficial sign outside a church in Macon-Bibb County, Georgia, directing voters to their new polling site after the location was moved without notifying all voters.

Photo: Alice Speri for The Intercept

That’s where many showed up to cast their vote on Tuesday — only to find the precinct had been moved once again. Most residents were never notified by election officials, Westbrooks said, which many voters confirmed. It was not until the afternoon, after so many had showed up hoping to vote, that the church’s pastor put out his own unofficial sign directing people to the new site, a Baptist church where many voters were told they were at the wrong place.

“That’s been happening all day, because these precincts here, they moved them like six times, so it’s been crazy. People get frustrated and they think it’s us, but it’s not us,” Shaun James, a 30-year-old mechanic who has served as a poll worker for seven years, told me while on a break. “We get moved around every election time, really. They keep changing it back and forth.”

“They do it to disenfranchise people,” Brown, the 60-year-old who had been to three different precincts looking for the right one, chimed in. “And why would you put it here in an industrial place where there’s nothing but this church?”

For those without a car, including residents of a senior housing project assigned to this site, the walk to vote was about a three-miles roundtrip, he said. “If you have bad knees, what are you going to do? … You really have to be determined.”

“If this is supposed to be for the people, then why are you running away from the people,” he added, shaking his head. “That makes no sense to me.”