In Trump’s America, women around the country are poised to experience exactly what it’s like to live in Texas. Just hours after the presidential election was called for Donald J. Trump — and as Hillary Clinton was delivering her emotional Wednesday morning concession speech — officials with the Texas Department of State Health Services were for the second time this year hearing public comments on a proposed new rule that would require women who seek abortions, or who miscarry their pregnancies, to cremate or bury their fetal tissue.

The rule is necessary, anti-abortion activists have variously claimed, because it provides dignity to fetuses, which have historically been disposed of in accordance with regulations for medical waste. At least one prominent Texas anti-abortion advocate, Carol Everett, said the rule was necessary to prevent AIDS from spreading through the state’s water system.

Women’s health and other advocates have sternly disagreed. The Texas Medical Association and the Texas Hospital Association (both reflexively hesitant to enter into the state’s politically charged abortion wars) wrote a joint letter to the health agency questioning the logic of the rule. Meanwhile, the Funeral Consumers Alliance of Texas penned a far sterner letter in July, lambasting the state for determining that there would be no fiscal impact (a basic burial costs $2,000, meaning the rule could cost upwards of $96 million per year) and for failing to consider Texas women as stakeholders before proposing the measure. “This new rule appears to force [a] woman to reveal to family, friends and the community her very personal choice of abortion because it requires the woman to contract with a funeral establishment, or ask for family and friends’ support with fetal disposition,” reads the letter. “This is a forced invasion of privacy with no apparent regard for the woman.”

Sadly, the proposed rule is just the latest in a long string of attacks on women’s reproductive health rights in Texas, which for nearly two decades has been a one-party state run by conservative Republicans hostile to women and their reproductive rights – a reality that last week’s election portends the federal government will soon reflect.

In short, it appears the country, and particularly its women, are poised to experience exactly what it’s like to live in Texas.

Since Gov. Rick Perry assumed his position in the wake of George W. Bush’s elevation to the White House in 2000, conservative lawmakers have done their best to ban Planned Parenthood from participating in any government-funded programs that provide basic wellness exams and birth control for legions of poor and uninsured Texas women; they have tried to block access to emergency contraception; and they have sought, at nearly every turn, to place onerous, medically unnecessary restrictions on access to safe and legal abortion, which, despite protestations that they’re meant to promote women’s health, are plainly and nakedly political.

That was certainly the case back in 2013, when members of the Texas legislature fought tooth and nail to pass restrictions that would ban abortion at 20 weeks (four weeks before the generally accepted date for viability outside the womb), severely restrict access to pharmaceutical abortion (traditionally carried out in the privacy of a woman’s home, this form of abortion takes place in the earliest weeks of pregnancy), and require not only that doctors who provide abortions have admitting privileges at hospitals close to each clinic where they practice, but also that abortion clinics transform themselves into costly hospital-like surgical centers.

After a first go at passing the controversial package of regulations was thwarted with an epic filibuster by Democratic state Sen. Wendy Davis, Gov. Perry intervened, almost immediately calling for a special legislative session designed solely to pass the omnibus abortion bill, which ultimately happened.

In the wake of the passage of House Bill 2, dozens of the state’s abortion clinics shuttered operations, leaving large swaths of the state — particularly in the Rio Grande Valley, where some of the state’s poorest women live — without any meaningful access to care.

Still, the efforts of conservative lawmakers to essentially end abortion access in Texas went unfulfilled, thanks to the June ruling by the U.S. Supreme Court striking down two of the provisions challenged by the Center for Reproductive Rights. The five-justice majority, which importantly included Justice Anthony Kennedy, found the provisions requiring hospital admitting privileges and the transformation of clinics into surgical centers unconstitutional. Supreme Court precedent allows for some restriction to abortion, but only where the restriction furthers some legitimate state interest and does not place an undue burden on a woman seeking care. Neither of the challenged Texas provisions passed that test. 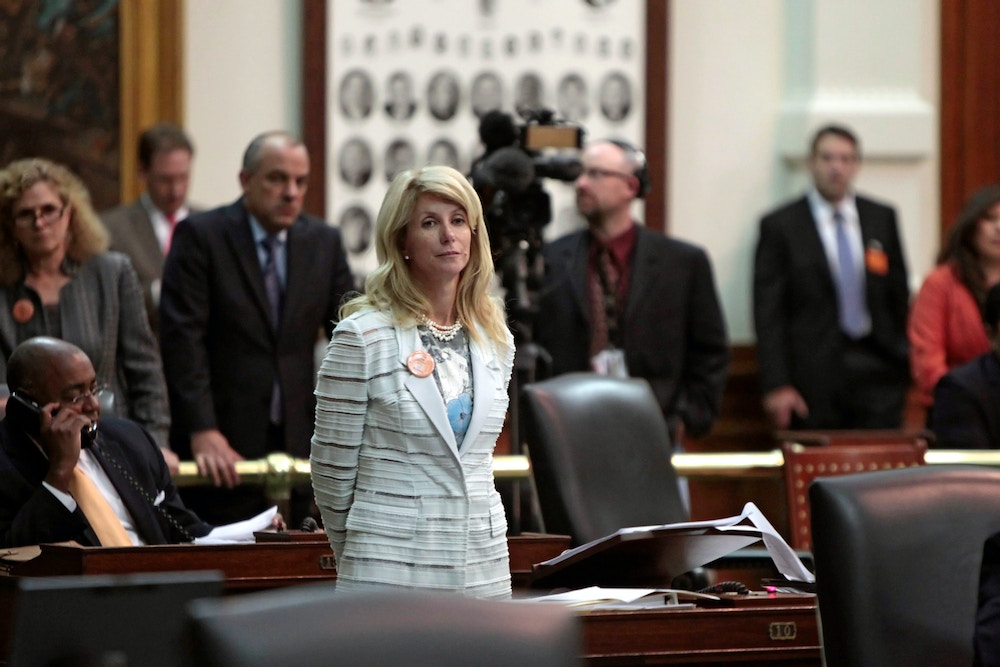 State Sen. Wendy Davis, D-Ft. Worth, stands after the Democrats defeated the anti-abortion bill SB5, which was up for a vote on the last day of the legislative special session on June 25, 2013, in Austin, Texas.

A Renewed Assault on Women’s Health

Indeed, the federal government has been crucial in insulating Texas women (and women in similar states) from the insidious regulations championed by conservative state lawmakers — but under a Trump presidency, those important protections may altogether disappear.

The fact that Trump may have an opportunity to seat more than one jurist on the high court, plus the possible dismantling of the Affordable Care Act and the defunding of Planned Parenthood, along with the specter of a health and human services agency controlled by one of the four men Trump is apparently considering for that post — each of whom have been openly hostile to a woman’s right to choose abortion in general — all add up to a terrifying scenario. The ramifications for women could be severe, allowing Texas-style regulations to become the national standard. “We’ve seen what this looks like in Texas, so, my gosh, it’s terrifying,” said Sarah Wheat, chief external affairs officer for Planned Parenthood of Greater Texas, who has been working on women’s reproductive health issues in the state for nearly 20 years. Without the kind of federal protections that now exist, she said, “We’re looking at unbelievable risks ahead.”

For example, when the state of Texas sought to defund Planned Parenthood by refusing to grant it federal Title X funds — the only pot of money earmarked for disbursement to the states to provide reproductive and basic health care to low-income individuals — the Obama administration subsequently declined to grant the money directly to the state of Texas in favor of releasing it instead to a coalition of health clinics that refused to discriminate among qualified providers, as the state had vowed to do.

And more generally, the ACA has leveled the playing field for women — disallowing insurers from charging more to women than to men for basic health services (one example of the so-called Pink Tax) and requiring that birth control be covered. “Those were huge benefits,” Wheat said.

There is ample evidence to suggest that these kinds of protections would be dismantled under a Trump administration, emboldening states like Texas to continue, if not dramatically expand, their assault on women’s health. Aside from his vow to eliminate the ACA, Trump suggested during his interview on “60 Minutes” that the nearly 44-year-old Roe v. Wade is merely unsettled law and that the legality of abortion should be decided by individual states — meaning, of course, that some women would simply be blocked from accessing abortion care unless they could afford to travel across state lines.

But perhaps most immediately telling is Trump’s selection of Mike Pence as vice president, a man who has repeatedly demonstrated hostility toward women’s rights and Planned Parenthood, both as a U.S. congressman and as governor of Indiana. In March, for example, Gov. Pence signed into law a package of abortion restrictions that includes a requirement that fetal tissue be buried. And as a congressman, in 2011, he led Republican efforts to defund Planned Parenthood.

Planned Parenthood, with its vast network of clinics, has been the largest recipient of Title X funds and remains the largest single provider of basic women’s health care in the country. (Importantly, no public funds support the group’s abortion services.) Nonetheless, Pence said that it was time to eliminate the group from any access to government funds. “My focus has and will remain on denying taxpayer dollars to Planned Parenthood or any organization that provides or promotes abortion as a means of birth control,” Pence said in a floor statement.

For now, this is all business as usual in places like Texas, where on November 14, the first day for filing legislation for the upcoming 2017 session, several lawmakers had already filed a range of proposed restrictions on women’s reproductive freedom. One measure would ban abortion based on a determination that the fetus suffers from a “severe and irreversible abnormality,” while a second measure would ask voters to amend the state’s constitution to extend personhood rights to a fetus. And, in a move seemingly designed to hedge bets, a third would create a statute requiring interment or cremation of fetal tissue.