News that Donald Trump is considering former Bush administration superhawk John Bolton to lead the State Department is persuading some neocons that Trump is willing to give war a chance after all. Neoconservatives spent months attacking Donald Trump, arguing that he has been insufficiently supportive of overseas military intervention. But the news that he is considering a former Bush administration superhawk to lead the State Department is persuading some that Trump is willing to give war a chance.

It is heavily rumored that former Bush U.N. Ambassador John Bolton — a man who has been a vocal advocate of attacking Iran — may be picked as Trump’s nominee to head the State Department. Bolton was critical of some of Trump’s remarks earlier in the campaign, but later came to his side.

Some of Trump’s loyal supporters reacted to the rumor with outrage. Longtime GOP strategist Roger Stone Jr., who has in the past served as a sort of confidante for Trump, noted that the candidate defeated the neoconservatives and thus advised him to repel them from their attempts to join the team:

President-Elect Donald Trump must repel the neocon “never Trump” boarding party. @realDonaldTrump did not beat Jeb to empower his lackeys

Kentucky Republican Sen. Rand Paul, who supported Trump as part of his pledge to support the GOP nominee, wrote an opinion piece on Rare headlined “Will Donald Trump betray voters by hiring John Bolton?” that “one of the things I occasionally liked about the President-elect was his opposition to the Iraq war and regime change.” But, Paul wrote, “At a time when Americans thirst for change and new thinking, Bolton is an old hand at failed foreign policy. The man is a menace.”

Specifically, Paul wrote, “we should resist any would-be leader who wants to bomb now and think later.”

Should John Bolton, opposed Trump, be appointed Secretary of State? I do not trust him! Let @transition2017 know #WeWantFlynn!

Meanwhile, many Republican hawks have spent the last week arguing that they should be making peace with Trump and be willing to work for him.

Consider Max Boot, an unrepentant supporter of the Iraq war, who earlier this year wrote that a “Trump presidency would represent the death knell of America as a great power,” citing among other things Trump’s skepticism about a U.S. troop presence in South Korea. He signed a letter composed by 122 Republican national security leaders urging voters to oppose Trump.

As late as October 31, Boot was scorning those who worked for Trump’s campaign:

Anyone who who works for Trump, knowing his history of stiffing contractors, deserves to get stiffed too. https://t.co/Dk84ESBh0d

But Boot’s tone has changed now. In a USA Today piece published last week, Boot continued to be skeptical of Trump but also urged those on the national security right who shunned him to work with him now. “I was one of 122 national security experts who signed a letter opposing Trump. The temptation now for me and my fellow #NeverTrumpers is to want nothing to do with a candidate we considered unfit for office,” he wrote. “The temptation for Trump is to want nothing to do with people who considered him unfit. For the good of the country, I hope the two sides can come together.”

He urged Trump to appoint people who opposed him during the campaign, citing President Nixon’s appointment of Henry Kissinger as a national security advisor despite the fact Kissinger worked for his political rival, Nelson Rockefeller.

Warhawk Lindsey Graham, who cited Iranian-Americans he knew growing up to claim that they “cheat and lie” and shouldn’t be trusted in a nuclear deal, has also had a change of heart. During the campaign, he declared that he wouldn’t be voting for Trump and called him a “Michael Moore Republican” for criticizing George W. Bush’s foreign and national security policy.

But Graham reacted with glee to Trump’s decision to name Republican National Committee head Reince Preibus as his chief of staff. That is apparently all Trump had to do to now be “serious about governing”:

Congrats to @realDonaldTrump for outstanding choice of @Reince to be Chief of Staff. This shows me he is serious about governing. (1/2)

No better person to represent president-elect than well-respected @Reince. I look forward to working with them to move country forward. 2/2

You may recall that the right-wing magazine The National Review served as a sort of intellectual headquarters for the #NeverTrump movement. They even put out a special issue that exclusively featured columns slamming candidate Trump: 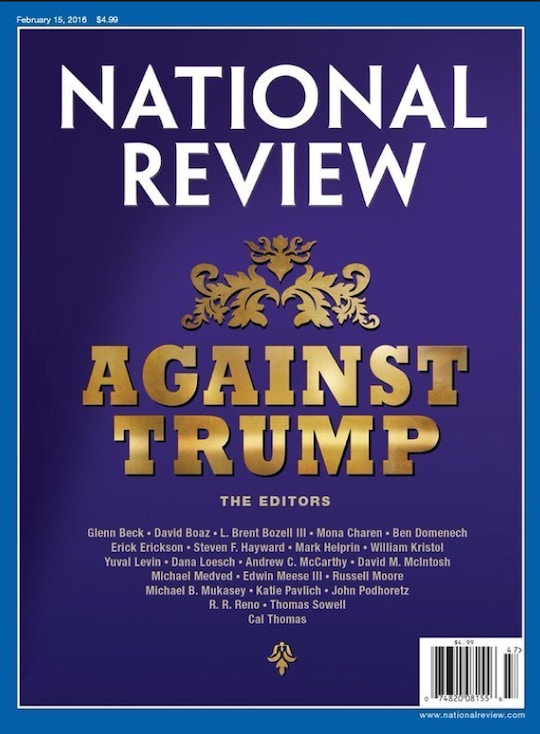 “Trump is a philosophically unmoored political opportunist who would trash the broad conservative ideological consensus within the GOP in favor of a free-floating populism with strong-man overtones,” the magazine’s editors wrote.

But it looks like Bolton’s nomination has many at the magazine rethinking their stance.

“Bolton has the advantage of being an experienced, straight-talking yet nuanced foreign-policy hand, who also fits the Trump sensibility on national security. Bolton is an American internationalist who believes in the importance of American power,” it gushed. “In short, John Bolton is an ideal pick, and his appointment would be a sign that the Trump administration intends to get off to a strong start.”

In a November 10 article titled “To An Anxious Friend…” Cohen concedes that he still believes the election of Trump to be “dreadful,” but that “Trump may be better than we think.”

“He does not have strong principles about much, which means he can shift,” Cohen noted. “He is clearly willing to delegate legislation to Paul Ryan and Mitch McConnell. And even abroad, his instincts incline him to increase U.S. strength — and to push back even against Russia if, as will surely happen, Putin double-crosses him.”

But on November 15, Cohen changed his mind. He took to Twitter to explain that he met with the Trump transition team and their arrogance has brought him to now recommending that national security officials stay away from the administration:

After exchange w Trump transition team, changed my recommendation: stay away. They're angry, arrogant, screaming "you LOST!" Will be ugly.

Appointing neoconservatives or those who think like them to his administration would be a clear betrayal by Trump of the principles he campaigned on: opposition to the wars of choice in Libya and Iraq, the establishment of safe zones in Syria, and detente with Russia.

But warhawks are increasingly trying to find a way into his administration — and just like the lobbyists who are already staffing his transition team, his campaign promises may give way to the Republican establishment.