Having raised doubts about the integrity of the voting machines, Trump is now perfectly positioned to demand recounts to see if they were, in fact, rigged. 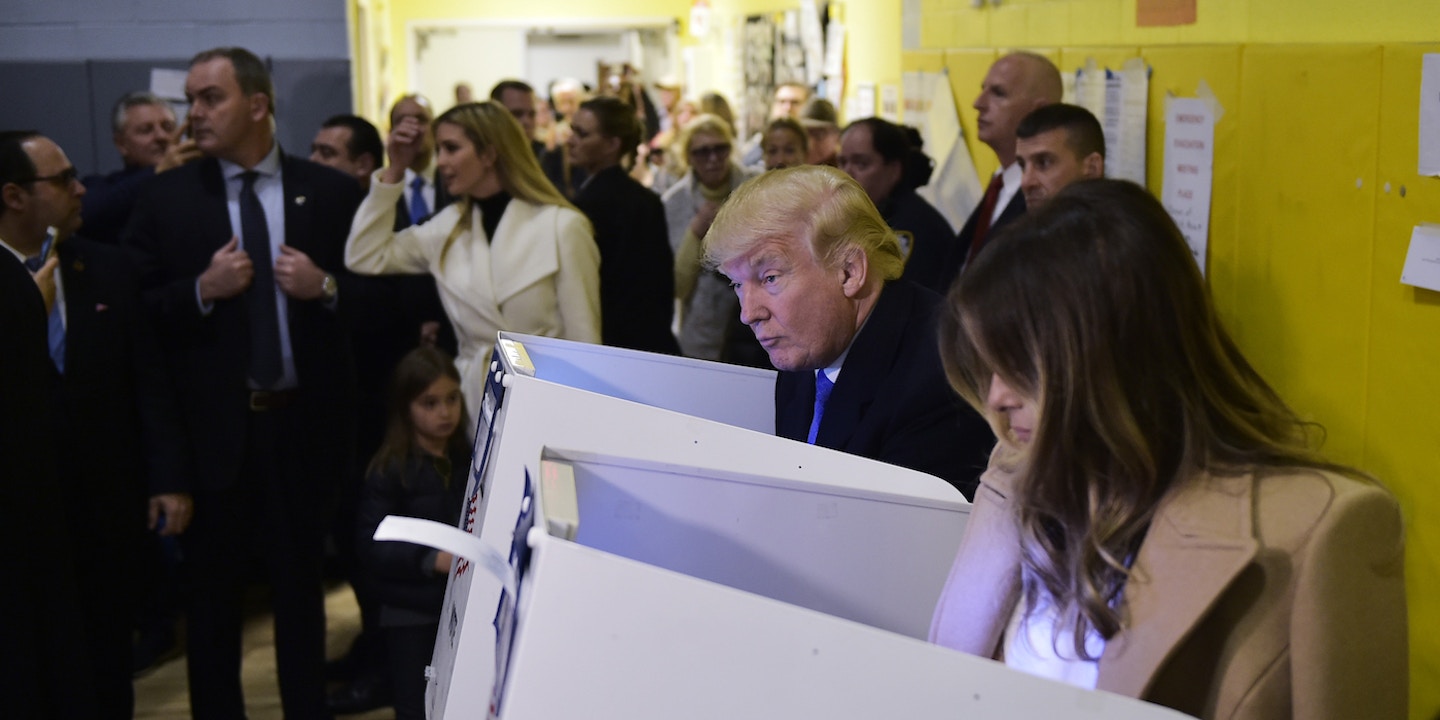 On Election Day, when polls suggested Donald Trump was headed for defeat, the candidate loudly questioned the integrity of the process, arguing on Fox News that reported problems with electronic voting machines made it impossible to be sure that the results would be fair.

Just 12 hours later, after projections showed him narrowly winning Pennsylvania, Wisconsin, and Michigan, and hence the electoral college, Trump made no mention of his qualms about the voting machines in his victory speech.

Despite Trump’s sudden lack of outrage at what he had previously called evidence of “a rigged system,” he is now ideally positioned to clear away the doubts he helped to amplify about the votes cast and counted on those poorly secured computers. He can do so simply by acting on his legal right to demand and pay for recounts in the three states that swung the election, to ensure that the vote count was not distorted by any accidental computer glitches or intentional malware infections.

While Trump often casts himself as a victim of powerful forces conspiring against him — like news organizations, the Internal Revenue Service, or the cast of “Hamilton” — his standing as the winning candidate endows him with the unimpeachable authority to demand recounts, to see if the rigging he complained of really took place.

A comprehensive audit of the vote was suggested on Wednesday by Alex Halderman, a respected researcher in computer security at the University of Michigan, who explained on Medium that he has approached Hillary Clinton’s campaign with a persuasive case for at least double-checking the results in those critical states.

“We’ve been pointing out for years that voting machines are computers, and they have reprogrammable software, so if attackers can modify that software by infecting the machines with malware, they can cause the machines to give any answer whatsoever,” Halderman wrote. “I’ve demonstrated this in the laboratory with real voting machines — in just a few seconds, anyone can install vote-stealing malware on those machines that silently alters the electronic records of every vote.”

In 2006, researchers at Princeton, including Alex Halderman, showed how easy it would be to infect an electronic voting machine with vote-stealing malware.

As Halderman argued, although there is no evidence that any such hacking took place in the Trump-Clinton contest, there is broad agreement among security experts that election results provided by computers should be routinely audited: by looking at paper records of votes, where those exist, or examining the machines themselves for signs of tampering.

makes no sense to oppose an election audit. many people do regular audits for reasons much smaller than verifying the integrity of democracy

The case for doing so this year would appear to be strengthened by widespread consensus in the U.S. intelligence community that hackers directed by the Russian government were working against Clinton, by stealing emails from Democratic party officials and providing them to WikiLeaks.

Seriously, there is nothing wrong with auditing the paper trails and DRE code. This should be routine practice even without a dispute.

But even though Wisconsin and Michigan, and several Pennsylvania counties, “predominately use optical scan paper ballots, which can be examined to confirm that the computer voting machines produced an accurate count,” Halderman noted that no American state “is planning to actually check the paper in a way that would reliably detect that the computer-based outcome was wrong.”

The crucial sentence of @jhalderm's's piece on the elections is "no state is planning to actually check the paper" https://t.co/CjPnMf7C6A

The election hacking threat was significant enough that 46+ states asked DHS for help. Yet no state intends to audit their ballots. https://t.co/wxqiZAZclp

For that reason, he and other experts argue, at least one of the candidates in the presidential election should exercise their right to request recounts.

Given that Clinton spent the final weeks of the campaign criticizing Trump for hedging on whether or not he would accept the results, it would be hard for her to do this, despite having received over 2 million more votes than Trump nationwide.

Although Jill Stein indicated on Wednesday that she would request recounts in those three states, she needs to first raise $2.5 million to pay for them by Friday, the deadline for making such a request in Wisconsin, where Trump’s margin over Clinton is less than 23,000 votes.

Hey @realDonaldTrump, I know how concerned you were with the election being rigged.
Can you spot Jill Stein the 2.5 million for a #recount

It is important to realize that there is a clear, non-partisan case for post-election audits of voting machines to be routine, rather than exceptional, and that there are alternatives to full recounts. As Ron Rivest, an MIT cryptographer, and Philip Stark, a professor of statistics at Berkeley, explained in USA Today last week, carrying out what’s known as a “risk-limiting” audit, in which a random sample of just 1 percent of the paper ballots cast would be examined, “could give 95% confidence that the results are correct in every state.”

But since there is no legal procedure in place to do such an audit of this year’s results, at least one of the candidates should take action to dispel the kind of doubts about ghosts in the machines Trump expressed on Election Day, which only grow with each viral anecdote of computer malfunction.

“Examining the physical evidence in these states — even if it finds nothing amiss — will help allay doubt and give voters justified confidence that the results are accurate,” Halderman argued. “It will also set a precedent for routinely examining paper ballots, which will provide an important deterrent against cyberattacks on future elections.”