“Certainly things that we’ve heard suggests that they would be well aligned with what we do today,” said the executive of one company that provides surveillance services to the government. Donald Trump campaigned on a promise to ramp up border security and to deport as many as 3 million undocumented people — rhetoric that is being celebrated as a potential goldmine for some in the surveillance and homeland security contracting industry.

Leidos, Infosys, and CACI International, among the largest defense contractors in the U.S., have told investors in recent days that they are poised to take advantage of Trump’s immigration policies.

Tom Mutryn, the chief financial officer of CACI, was asked last Wednesday by Credit Suisse analyst Rob Spingarn if his firm would have an “opportunity to play a role” in Trump’s immigration agenda.

“Yes, I think absolutely, yes,” said Mutryn, speaking at an investor conference in Palm Beach, Florida. CACI, he responded, can provide “a better system to kind of track people in the United States, an IT system where there’s a more robust visibility into people who are living in the United States,” as well as border security systems.

Down the coast from the CACI event, Bank of America hosted a presentation that same day in Boca Raton with Unisys Corporation, a firm that already provides surveillance technology for the Department of Homeland Security and Customs and Border Protection.

During the Boca Raton presentation, Unisys chief financial officer Inder Singh stressed that homeland security contracts have become a larger share of the firm’s client base. The company, Singh said, now employs 1,000 employees with security clearances working to “literally screen all passengers entering and exiting the United States through any border.” The firm uses technology such as RFIDS scanners and license plate readers to “to identify who’s in the vehicle, who owns the vehicle, what’s the history, etcetera.” 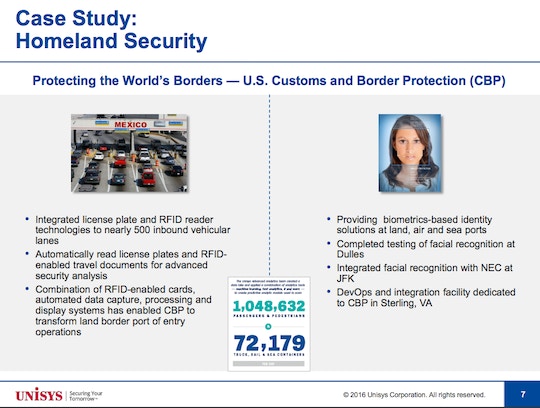 Ana Goshko, the Bank of America analyst presenting with Singh, asked the Unisys executive if he could explain how “a lot of the priorities that President-elect Trump has highlighted, in particular the law and order theme, the border control theme” could present “opportunities.”

Singh noted that discussions about border security bodes well for the company. “We would wait to see what the new President lays out in terms of priorities, but certainly things that we’ve heard suggests that they would be well aligned with what we do today for the country,” he said. The Trump phenomenon, Singh also argued, is global, and that issues around border security and migration, especially in Europe, are “well aligned with what we do.”

Defense contractors have long viewed border security and immigration as a growth area. CACI, notably, provides a wide array of services to law enforcement and the military, including a recent contract to provide tactical communications systems for Immigration and Customs Enforcement. The firm is being sued by former detainees at the Abu Ghraib prison in Iraq who say its contractors tortured them.

In recent years, large defense contractors including Raytheon, Lockheed Martin, and General Dynamics, have pivoted to compete for border security contracts. During the 2013 debate over comprehensive immigration reform, industry lobbyists helped add $40 billion in border security amendments to the bill. The bill, which passed the Senate, died in the House of Representatives.

It’s been 10 years since Boeing and Elbit Systems, an Israeli defense contractor, were tapped to build a $1.1 billion network of surveillance towers along the border. The program, known as SBInet, was plagued by problems, including delays and false alarms detected by the system. Though SBInet is viewed largely as a failure, Elbit Systems has gone on to win contracts to provide drones along the U.S.-Mexico border.

Signs for new opportunities in a Trump administration are already apparent: Mike Dougherty, a former Bush administration official who now leads the Secure Identity & Biometrics Association, a trade group that lobbies for border security firms, including Unisys and Leidos, was recently named to help manage the Department of Homeland Security transition.

Photo: A U.S. Office of Air and Marine helicopter searches for undocumented immigrants north of the U.S.-Mexico border on August 6, 2015 near Falfurrias, Texas.