Disinformation, Not Fake News, Got Trump Elected, and It Is Not Stopping

The “PizzaGate” hoax should be described as what it is: a disinformation operation intended to boost Donald Trump by tarnishing Hillary Clinton. I made a mistake on Twitter on Sunday night. When I learned that a man with an assault rifle had stormed into a Washington pizzeria to “self-investigate” an online conspiracy theory for which there is no evidence — that the restaurant is a front for child sex abuse involving Hillary Clinton — I decided to confront some of the alt-right bloggers who had played a role in spreading the hoax on the social network.

The gunman, Edgar M. Welch, surrendered after telling the police that he had discovered that there were no child sex slaves being held at the pizza place, Comet Ping Pong, despite the lurid fantasies he had read online about a made-up scandal known as “PizzaGate,” which surfaced just before Election Day. 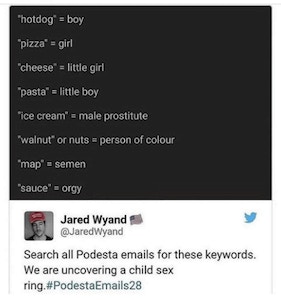 Those who had worked diligently to spread the hoax — and others who had a hard time accepting that it was obviously not true — had by Sunday night started to claim that Welch himself was part of the plot. He shot up the pizzeria, they said, as a “false flag” attack to distract attention from the (entirely imaginary) scandal they claimed to have uncovered by reading between the lines of hacked emails published by WikiLeaks.

Pro-Trump conspiracy theorists who fabricated "pizzagate" now claim man who attacked pizzeria as a result is part of the conspiracy https://t.co/oRXXi0vzDE

Except the gunman's own statement to police that he was inspired by your fabricated conspiracy theory https://t.co/De5EgAdayH

Islamic terror attack: Not all Muslims!

Nutcase walks Into Comet Pizza with gun: Anyone who even mentioned #PizzaGate is responsible!

You are responsible for this https://t.co/XKIqBrybdY

Until #Pizzagate proven to be false, it'll remain a story. The left seems to forget #PodestaEmails and the many "coincidences" tied to it. https://t.co/8HA9y30Yfp

Here's our next National Security Adviser's son demanding proof that fantasies fabricated by Trump supporters to damage Clinton are not true https://t.co/B0ttnzFss4

I’ll admit there was something quixotic about the premise behind my intervention, namely the hope that people who have devoted hundreds of hours to spreading falsehoods intended to boost Donald Trump by tarnishing Hillary Clinton would suddenly transform into responsible adults when confronted by the dangerous behavior of a man who mistook the fantasy they peddled for reality.

But watching the campaign of disinformation that lifted Trump to the presidency continue and even accelerate after Election Day poses an obvious challenge for professional journalists, whose careers are dedicated to the premise that facts matter.

I was not alone. Jake Tapper of CNN, another journalist who understands the power of social media to amplify both genuinely valuable information and baseless rumors concocted by partisan political operatives, took those who spread the conspiracy theory to task.

Predictable result of people irresponsibly spreading insane falsehoods on social media. What could have happened is terrifying -- https://t.co/15PHVvyk7o

Among those Tapper confronted on Twitter was Michael G. Flynn, who was at that point a member of Trump’s transition team and whose father, Lt. Gen. Michael T. Flynn, has been named the next president’s national security adviser. Flynn the younger was kicked off the transition team on Tuesday.

asking you for evidence of what DC police call a "fictitious conspiracy theory" isn't trolling, Michael.

Flynn’s willingness to adopt the default position of conspiracy theorists — demanding that the rest of us prove that the wild fantasies they have concocted without evidence are not true — matters because he has been a close aide to his father, who promoted a previous version of the false rumor that Clinton was involved in the sexual abuse of children on the eve of the election.

The senior Flynn, a former intelligence chief, is likely aware of the long history of elaborate hoaxes in political history. Earlier this year, he co-wrote a book with Michael Ledeen, a former Reagan official who was involved in the Iran-Contra deception. Ledeen was once accused of secretly collaborating with an Italian intelligence service that specialized in disinformation campaigns to tarnish the reputation of Jimmy Carter’s brother, Billy, just two weeks before the 1980 presidential election.

Sharif Silmi, a lawyer who was playing ping pong at Comet with his wife and three children when the gunman burst in — and who photographed the Welch’s surrender to police — wrote that he held those who spread wild tales about the pizza place responsible for endangering their lives.

Silmi soon received the same response as reporters who confronted the conspiracy theorists: a barrage of abuse, including hysterical claims that we were all in on the plot.

wheres your proof pizza gate is fake cuz the MSM says so?why do u find it soooo hard to believe? Are you one of those sickos ??

Look at these nut jobs lol I don't know whether to laugh or cry. https://t.co/cjcOMK47Fj

Silmi’s decision to single out Alex Jones, a pro-Trump internet radio host who helped amplify the wild speculation about Comet pizza found in 4chan and Reddit threads, led to an extremely bizarre dialogue between the two men on Monday. (Jones featured clips from the interview on his YouTube channel, but the complete exchange is also available.)

After Silmi said that the rumors about something nefarious happening at the pizza place were baseless, Jones — who claims that the September 11 attacks and the massacre at Sandy Hook Elementary School were staged by the U.S. government — insisted that the online hysteria over the restaurant, which he referred to as an “investigation,” was warranted.

“Clearly,” Jones said, “there’s code going on,” referring to mentions of the restaurant and the ordering of pizza in emails hacked from the account of John Podesta, Clinton’s campaign chairman, and published by WikiLeaks. All he was asking for, Jones said, was law enforcement to investigate the (entirely imaginary) goings on at the pizzeria.

Silmi’s conversation with Jones, like my own brief exchange with one of the most prominent boosters of the #PizzaGate hoax —  the popular alt-right blogger Mike Cernovich — revealed something interesting about the mindset of those engaged in the vast campaign of disinformation that has helped to elevate Trump to the presidency. They fend off accusations that they are propagandists by claiming to be engaged in investigative journalism.

It's just a few hundred thousand people online investigating this issue. Why so afraid?

Cernovich, for instance, accused me of “trying to silence journalists” while demanding to know why I had not reported on Dennis Hastert, the former congressman jailed in April for covering up his sexual abuse of young members of a wrestling team he once coached.

.@RobertMackey You're spending all night trying to silence journalists, but you said nothing about convicted pedophile Dennis Hastert. Why? pic.twitter.com/53ROGcHZXm

Dozens of Cernovich’s followers took his hint and bombarded me with ugly messages accusing me of being a pedophile and working to cover up a scandal they persisted in treating as real.

But before he started styling himself as an investigative journalist, Cernovich was quite frank about his role as a propagandist, telling the New Yorker in September that his objective was simply to get as much attention as possible any “story that can hurt Hillary.”

Given the results, it is hard to argue that I was anything but foolish to have tried to argue sense into these people, but it is important to realize that the phenomenon we are confronting here is not simply fake news of the sort peddled for profit by apolitical entrepreneurs on Facebook. This is something different: a hoax created and released into the darker reaches of the internet for the express purpose of damaging the reputation of the Democratic candidate for the presidency.

As with many other false stories about Clinton that have widely spread online — like the baseless rumor promoted by Infowars and then Trump that millions of non-citizens illegally voted for her, and were encouraged to do so by President Obama — this should be described as what it is: disinformation, or the sort of “black propaganda” intelligence agencies have fabricated in decades past to smear politicians they see as enemies.

While the exact provenance of the conspiracy theory about Comet pizzeria is hard to trace, perhaps intentionally, it includes one detail that seems like a clue that it was invented by a political operative. Comet is owned by James Alefantis, who, as the New York Times reports, was once in a relationship with David Brock, a former conservative operative who switched sides and became a stalwart defender of Hillary Clinton. Brock is the sharp-elbowed founder of Media Matters for America, a website hated by conservatives for doggedly tracking and debunking misleading reports from Fox News and right-wing outlets.

Whatever its true origin, now that it has been released into the wild, the PizzaGate conspiracy theory is threatening to spiral into further violence, and the anger it has provoked has spilled beyond the intended target. The Washington Post reported on Tuesday that employees of a nearby pizzeria have been harassed online, on the phone, and in person.

Abdel Hammad’s Besta Pizza was swept up in the witch hunt shortly after the election, when the company that maintains his website alerted him to an astonishing new review. Someone had alleged that his shop’s simple, pizza-shaped logo was also a symbol of child pornography.

He removed the logo from his site but couldn’t afford the more than $2,000 to pay for new signs.

“Why did you change the website?” anonymous callers began screaming at him over the phone.

“We’re going to put a bullet in your head,” threatened another.

Last week, Hammad said, a pair of protesters barged into his shop and photographed a manager, who broke his fingers when he tried to stop them.

Other nearby businesses have also reported harassment, in fits of misdirected rage that recall an incident in Wales several years go, when, in the midst of a tabloid newspaper hysteria about child sex abuse, a pediatrician was forced to flee her home after vigilantes, confused about her professional title, mistook her for a pedophile and painted the slang word “Paedo” on her front door.

Top photo: Edgar Maddison Welch, the gunman who stormed into Comet Ping Pong in Washington on Sunday, surrendered to the police after discovering no evidence to support the conspiracy theory that motivated his raid.