Residents of a coastal village on the Red Sea in western Yemen recovered evidence of cluster weapons after an attack that killed a local fisherman. In a country dependent on imports, Saudi coalition strikes against the fishing industry have taken a devastating toll. 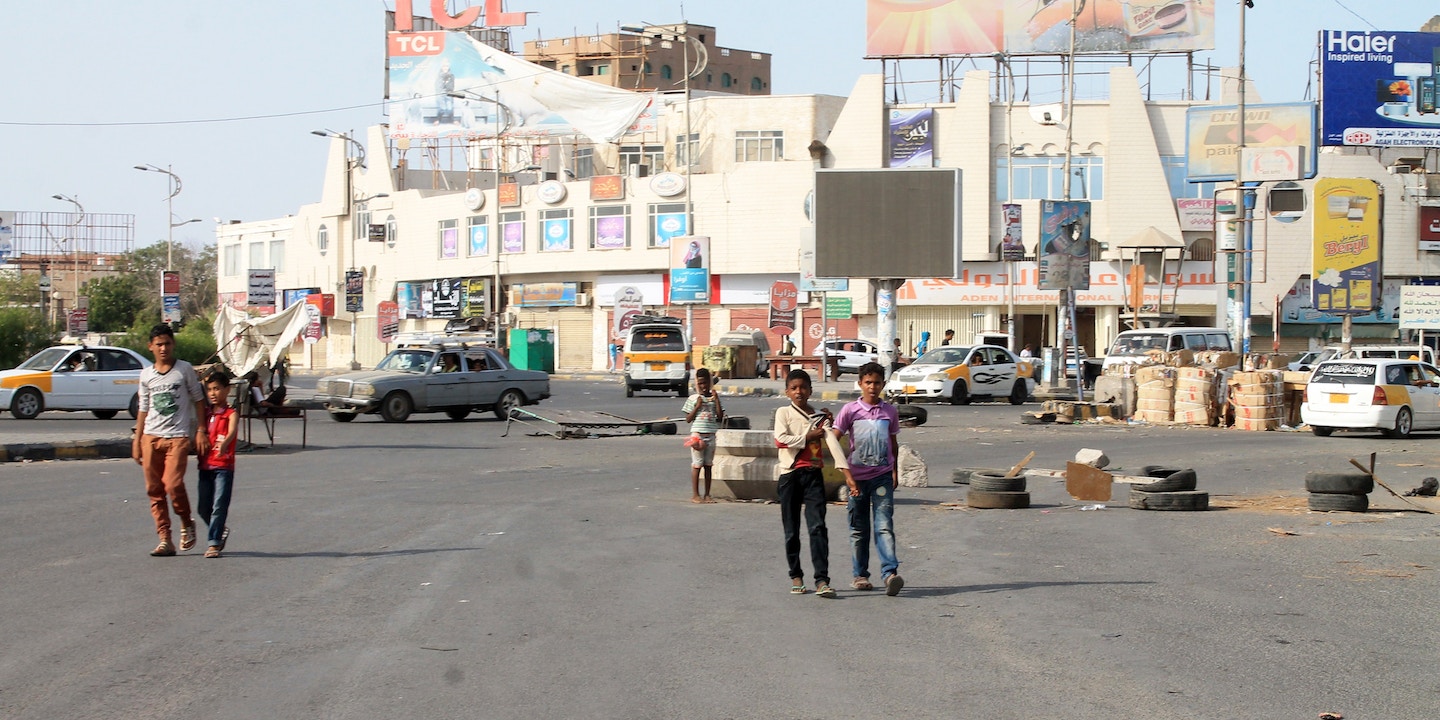 On the morning of October 5, Ali Mohammed “Jubahi” Medarij set out early from his family home in al-Hayma, a coastal fishing village on the Red Sea in western Yemen. Every day, the 34-year-old fisherman traveled 9 miles to a local market — not to sell his catch, but to look for work.

The father of five had not taken his boat to sea in months. Eight other fishermen had already gone missing, presumed dead from attacks by the Saudi naval blockade. Jubahi had joined the other fishermen and dragged his boat onto the beach, where it sat idle while he struggled to support his wife, elderly father, and children.

But on that fall day, Jubahi’s trip to the market was successful. He returned in the early afternoon to share a meal with his family, before wandering down to the beach by himself. According to his father, Jubahi slipped underneath an overturned boat to escape the afternoon sun, and — exhausted — closed his eyes to sleep.

He never woke up. The al-Hayma beach on the Red Sea in western Yemen.

Villagers in al-Hayma told The Intercept they heard rumbling around 3 o’clock in the afternoon. Soon after, they saw a jet from the Saudi-led coalition circling over the coast. Assisted by the U.S. with weapons and intelligence, Saudi Arabia has been bombing and blockading Yemen for 21 months.

“The warplane was hovering toward the shoreline before I saw something with parachutes falling down,” said Yahya Qassem Zabah, a local fisherman. “For a moment I thought that soldiers were landing. Then I heard a number of explosions soon after that.”

What Zabah saw was not a soldier parachuting toward the coast, it was a cluster weapon. In mid-air, its shell casing opened and released cylinder-shaped bomblets, which scattered as they plummeted to the beach.

All at once, like deafening firecrackers, explosions ripped across the sand, splintering, smashing, and overturning fishing boats. People from the village of al-Hayma inspect a fishing boat.

Jubahi’s family found his body among the wreckage in a pool of his own blood. His head had been struck by one of the munitions while he slept. “There was a hole in his head with blood spilled underneath,” Jubahi’s father, Mohammed Omar Medarij, told The Intercept before bursting into tears.

The villagers recovered two empty shell casings and three parachutes, which Jubahi’s family kept as evidence and showed to The Intercept. “They took out my son and left these rags behind,” Medarij said, gesturing toward the parachutes.

It was not the first time the villagers had seen such weapons. In December 2015, Human Rights Watch confirmed that coalition warplanes dropped CBU-105 cluster bombs on al-Hayma, damaging multiple homes and seriously injuring at least two civilians.

Shell casings from a BLU-108 submunition of a CBU-105 cluster bomb, recovered in al-Hayma after an attack on October 5.

Researchers from Human Rights Watch identified the shell casings in photographs taken by The Intercept as a U.S.-made cluster bomb. The serial number documented in the photographs also begins with the five-number “commercial and government entity” (CAGE) code 04614 — indicating that the weapons were produced in the United States, by the Rhode Island-based company Textron Systems.

Saudi Arabia began bombing Yemen in March 2015, seven months after Houthi rebels overran the capital city Sanaa and deposed the Saudi-backed leader, Abdu Rabbu Mansour Hadi. The U.S. has been a silent partner to the war ever since, supplying targeting intelligence, flying refueling missions for Saudi aircraft, and authorizing more than $20 billion in new weapons transfers. Since the beginning of his administration, President Barack Obama has sold $115 billion in weapons to the Saudis, more than any of his predecessors.

Saudi Arabia is dependent on the U.S. in its bombing campaign, explained Bruce Riedel, a senior fellow at the Brookings Institute and 30-year CIA officer, at an event in April. “If the United States and the United Kingdom, tonight, told King Salman [of Saudi Arabia] ‘this war has to end,’ it would end tomorrow. The Royal Saudi Air Force cannot operate without American and British support.”

An official at the Saudi Embassy declined to comment.

Meanwhile, Textron’s video advertisements for the CBU-105 depict munitions that appear to be identical to those photographed by The Intercept.

Cluster weapons have a stigma attached to them, because of the particularly heavy toll they’ve taken on civilians. The weapons disperse miniature explosives over a large area, and a small number of the bomblets typically fail to detonate on impact, leaving behind mine-like explosives that often later kill civilians and destroy farmland. A report by the group Cluster Munitions Monitor found that civilians made up 97 percent of all worldwide cluster bomb casualties, primarily due to their use by the Assad government in Syria and the U.S.-backed bombing coalition in Yemen.

Due to their civilian toll, cluster bombs were banned by a 2008 treaty signed by 119 countries, but not by the U.S., Russia, and Saudi Arabia.

Foreign Policy magazine reported in May that the Obama administration put a hold on the latest transfer of CBU-105 munitions to Saudi Arabia, likely due to a 2009 export law that forbids the sale of cluster bombs to countries that use the weapons “where civilians are known to be present.”

Bowing to public pressure in August, Textron Systems also announced that it would be phasing out production of the CBU-105, ending the manufacturing of cluster bombs in America. In a filing with the Securities and Exchange Commission, Textron explained that CBU-105 sales relied on “both executive branch and congressional approval,” and that “the current political environment has made it difficult to obtain these approvals.”

The Pentagon nonetheless maintains a large stockpile of CBU-105 munitions that it could transfer at a later date. Congress narrowly defeated a measure in June that would have prohibited their export to Saudi Arabia. The Pentagon opposed the measure, worried that it would unfairly “stigmatize” the weapon.

The Saudi coalition continues to use cluster bombs, and other U.S.-supplied weapons, to bomb civilian sites, including homes, factories, markets, hospitals, children’s schools, and a funeral. Human Rights Watch released a report last week documenting further attacks on a prison and water-drilling site.

“After more than 20 months of war, unlawful Saudi-led coalition airstrikes not only continue but have become shockingly common in Yemen,” said Kristine Beckerle, Yemen researcher for Human Rights Watch. “It is hard to see how the U.S. continuing to ship billions of dollars in arms to Saudi Arabia — despite the rising civilian death toll and evidence of war crimes — is likely to do anything other than signal an American stamp of approval for the conduct of Saudi military operations and further put the U.S. at risk of complicity in unlawful coalition attacks.”

Jubahi’s death has thrust his family into poverty. His father, in his mid-sixties, is too weak to earn an income from hard labor. Jubahi’s wife is trying to feed her five children by weaving rope and mats out of palm leaves, but the family is mostly dependent on handouts from the already poor community.

In a country dependent on imports for the majority of its food, strikes against Yemen’s fishing industry have taken a particularly devastating toll. Fishing has declined in the Hodeidah governorate — the province where al-Hayma is located — by 75 percent. Of all of Yemen’s provinces, the U.N. places Hodeidah at the highest risk for famine, and the U.N. estimates that 100,000 children under age 5 are at risk of severe malnutrition. In al-Hayma alone, nearly 300 of the village’s 1,600 children are malnourished, according to local medical staff.

And the Saudi-led coalition has continued to attack fisherman and their ships, accusing them of smuggling Iranian weapons to the Houthis. In one particularly vicious attack in October 2015, Saudi warplanes fired missiles at fisherman anchored off the Red Sea island of Aqban, before Apache attack helicopters strafed the shallows to shoot survivors. The attack killed at least 42 fisherman, and possibly as many as 100.

Reuters reported Wednesday that the United States will halt transfer of munition guidance systems to Saudi Arabia and modify its training for the kingdom’s air force. An administration official who refused to be named confirmed the report to The Intercept.

Top photo: Cars drive on a main road in the Sheikh Othman area, in the southern Yemeni port city of Aden, on May 13, 2015.