Muslim-Americans at the U.S. border say that they are being targeted by border agents. One young man alleges he was choked after declining to turn over his mobile phone. 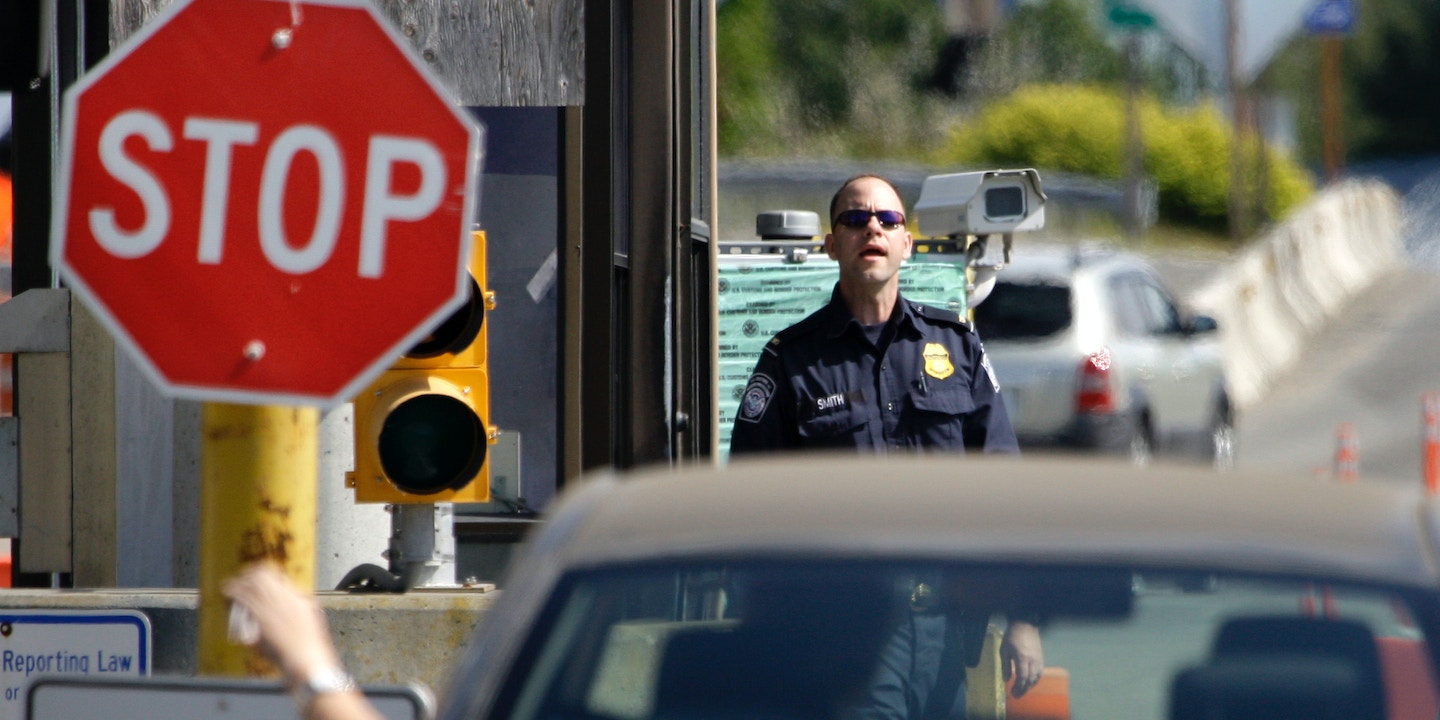 Customs and Border Protection agents have been invasively questioning Muslim-Americans at U.S. border crossings about their political and religious beliefs, asking for their social media information, and demanding passwords to open mobile phones, according to a set of complaints filed by the Council on American-Islamic Relations (CAIR).

In one case, a 23-year old American citizen alleges that he was choked by a CBP agent after declining to hand over his phone for inspection while crossing the border back from Canada.

The complaints deal with the cases of nine people who have been stopped at various U.S. border crossings, eight of whom are American citizens, and one Canadian. They were filed to the Department of Homeland Security, Customs and Border Protection and the Department of Justice.

The allegations come in the wake of The Intercept’s report that CBP agents have been working with the FBI to pressure Muslims entering the U.S. to become informants. Reports of racial profiling at the border have been endemic in recent years. In 2015, The Intercept also reported on portions of a questionnaire used by ICE (Immigration and Customs Enforcement) agents that included invasive questions about religious practices and beliefs.

In recent years a number of lawsuits have been filed over alleged incidents of discrimination and racial profiling at border crossings. In 2014, the U.S. Attorney General’s office announced rules intended to prevent racial profiling by federal law enforcement agents. Those measures excluded Department of Homeland Security agencies like CBP, however, leaving the door open to continued abuses. And while warrants are normally required for federal authorities to search cellphones, this requirement does not apply at border crossings.

The complaints filed by CAIR allege that CBP agents have been asking travelers questions including, “are you a devout Muslim”, “what do you think of the United States”, and “what are your views about jihad?” The complaints also say that people have reported being asked whether they attend a mosque and what their opinions are about various terrorist groups.

One of the cases in the complaints involved Akram Shibly, a 23-year-old American citizen from Buffalo. He told The Intercept that he had been detained at the border during two separate incidents in early January, including one where he says agents physically assaulted him when he declined to give them his cellphone.

During the first incident, while driving back to the United States from Canada on New Year’s Day, he and his fiancée were pulled aside, searched and interrogated by border agents. Shibly said that he and his fiancée’s cellphones were confiscated and taken into a back room out of view. They were given forms to fill out that asked for passwords to unlock their devices, as well as for their email addresses and information about their family backgrounds — requests that they complied with.

During his interrogation, agents asked Shibly about his travel history and some religious practices, as well as his work as a filmmaker. (Shibly operates a YouTube channel where he posts recorded discussions on a variety of subjects.)

After being detained for roughly an hour and a half, Shibly and his fiancée were given their phones back and let go.

A few days later however, driving back from Canada on another trip, they were stopped again. After being taken aside for questioning and asked for his cellphone once more, this time Shibly declined.

“I had already regretted letting them go through my personal information a few days earlier, and this time I told them I do not feel comfortable giving you my phone,” Shibly said.

At that point, three CBP agents physically accosted him as he sat in a chair next to his fiancée, with one grabbing him from behind by the neck, another pinning his legs down, and a third agent reaching into his pocket to grab his phone, he said.

“I was sitting down, I wasn’t violent, I wasn’t yelling or charging at them, but they treated me like I was a violent criminal,” Shibly said. “I told them I’m an American citizen and was born and raised here, and one of the agents told me: ‘We don’t know if you’re really an American citizen, we’ll let you know when our investigation is complete.’ ”

After being detained for about 45 minutes, Shibly and his fiancée were let go. He said that before they left, another CBP officer apologized for his harsh treatment.

But Shibly fears more harassment in the future.  “I honestly feel very traumatized. I love to travel, but now I feel like every time I come home I’m going be harassed and treated like a criminal for no reason,” he said.

When reached for comment, a spokesman for CBP said that the agency is, “aware of the allegations made by Mr. Shibly and they are currently being investigated by another agency.” The spokesman added that they could not comment further due to the ongoing investigation.

Warrantless confiscation and search of personal electronics at the border has become a major civil liberties issue, due to the wealth of personal data stored on such devices. According to DHS guidelines on border searches, CBP agents not only have the power to seize electronics, but can also “copy the contents of [an] electronic device for a more in-depth border search at a later time.”

A 2010 lawsuit filed by the American Civil Liberties Union (ACLU) to stop such practices was dismissed in 2013, allowing the CBP to continue what the group criticizes as “intrusive searches of Americans’ laptops and other electronics” at ports of entry. These searches remain a “contested legal issue” today according to the ACLU. But the group also notes that, although they may suffer delays, “U.S. citizens cannot be denied entry to the United States for refusing to provide passwords or unlock devices.”

Civil liberties groups fear that harassment at the border will intensify during the Trump administration. Trump has suggested that Muslim immigrants may be subject to “extreme vetting” at the border or even outright bans from entry, depending on their immigration status. Any directives that encourage racial profiling are likely to have adverse effects for communities that are already facing racial profiling issues under President Obama.

Shibly says that despite being physically accosted by CBP agents, he would not have given them access to his phone if he had known that they could not bar him from entry for refusing.

“They are taking advantage of people’s ignorance of their rights at the border and are using that to pry into our personal life,” he says. “But now there is a real risk for us, because officers are not only demanding our personal information but are getting violent if we don’t provide it.”