DeVos criticized Bernie Sanders’s tuition plan for its largess. Her own wealth is built off of inheritance and marriage. 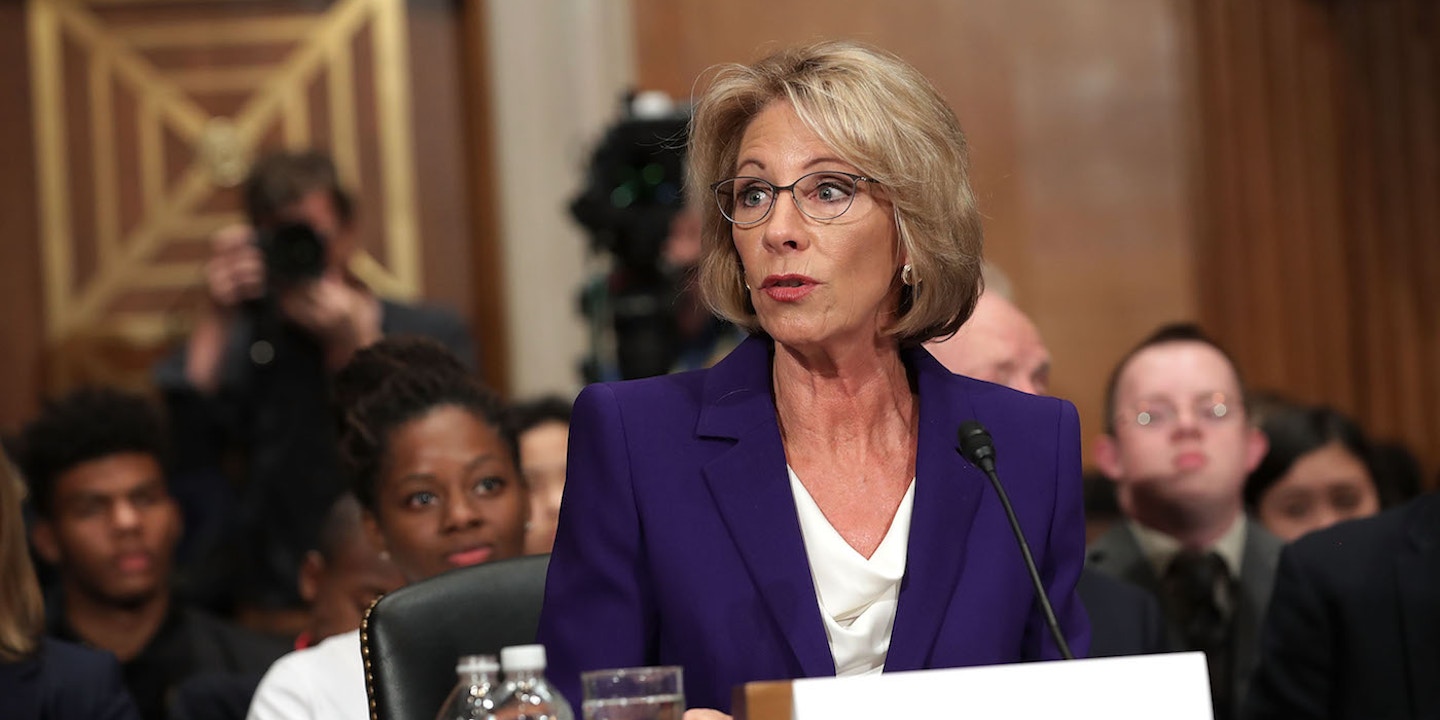 Betsy DeVos, the right-wing activist who the Trump administration has nominated to lead the Department of Education, criticized Bernie Sanders’s plan to offer tuition-free education at public colleges and universities during her Senate confirmation hearing on Tuesday.

“Senator I think that’s a really interesting idea,” she said when asked by Sanders about his plan. “And it’s really great to consider and think about, but I think we also have to consider the fact that there’s nothing in life that’s truly free, somebody’s going to pay for it.”

The proverb about nothing in life being free is ironic coming from DeVos, whose wealth is built off of inheritance and marriage. She is the daughter of Edgar Prince, who founded the Michigan-based Prince Corporation, an auto parts business that sold for $1.35 billion in 1996; she also married into the massive Amway fortune by marrying Dick DeVos, whose father co-founded that company.

“Somebody will pay for it,” Sanders replied.

He called attention to GOP plans to lower tax rates for wealthy Americans while many students cannot afford to pay for college. “Do you think that makes sense?”

DeVos avoided the question. “Senator, I think if your question is really around how can we help college and higher education be more affordable for young people as they — ”

“Actually, that wasn’t my question,” Sanders interjected. He once again repeated his question about tuition-free college, and DeVos once again deflected.

It’s true that somebody does have to pay to subsidize tuition-free education for America’s students — but it’s actually pretty cheap, all things considered. Sanders’s plan would cost the federal government approximately $47 billion annually. That’s a small fraction of a nearly $18 trillion U.S. gross domestic product. His proposed bill includes a small speculation fee on stock trades of about 50 cents for every $100 of stock, as well as a 0.1 percent fee on bonds and a 0.005 percent fee on derivatives to pay for his legislation, which would actually raise hundreds of billions of dollars annually, easily paying for tuition-free college and other reforms Sanders has called for.

Sanders and DeVos also sparred over her family’s fundraising for the Republican Party over the past several decades.

“Would you be so kind as to tell us how much money your family has contributed to the Republican Party over the years?” Sanders asked.

DeVos thanked Sanders for the question, then said: “I wish I could give that number, I don’t know.”

“I have heard the number was 200 milion. Does that sound in the ballpark?”

Sanders then pivoted to the obvious question, asking if these sums had anything to do with her nomination.

“My question is, and I don’t mean to be rude, but do you think if you were not a multi-billionaire, if your family had not made hundreds of millions of dollars of contributions to the Republican Party, that you would be sitting here today?”

DeVos answered: “Senator, as a matter of fact I do think there would be that possibility. I’ve worked very hard on behalf of parents and children for the last almost 30 years,” she replied, rattling off some of her education activism.

The DeVos family has indeed given over $200 million to the GOP over the years, and she has in the past explained why. “My family is the biggest contributor of soft money to the Republican National Committee,” she wrote in Roll Call in 1997. “I have decided to stop taking offense at the suggestion that we are buying influence. Now I simply concede the point. They are right. We do expect something in return. We expect to foster a conservative governing philosophy consisting of limited government and respect for traditional American virtues. We expect a return on our investment.”

Top photo: DeVos at her confirmation hearing on Capitol Hill on Jan. 17.