A transition of power from Bashar al-Assad remains the key to settling an underlying conflict that goes back decades, experts say. After nearly six years, the Syrian civil war is heading toward a possible conclusion. High-profile talks organized by the Russian government are set to commence later this month, seeking to bring a negotiated end to the brutal conflict. The U.S. has been encouraging these talks as a step toward a broader political settlement that will require American participation.

While President-elect Donald Trump and Bashar al-Assad, the Syrian leader, have both publicly flirted with the idea of partnering in the future, any normalization of U.S. relations with Syria should occur only if major reforms and a transition of power are carried out, according to many experts on the region. Any other outcome would not end the country’s instability, only postpone it.

“The attitude of the United States toward the upcoming talks is very important,” says Gilbert Achcar, professor of development studies and international relations at the School of Oriental and African Studies in London. “Donald Trump has said he prefers Bashar al-Assad over any alternatives, but the reality is that any outcome that doesn’t result in guaranteed political transition and reform in Syria will not end the conflict there.”

At the heart of the problem is the Assad regime itself. While the Assad family has managed to hold onto power in the country for over four decades, it has done so in a brutal manner that repeatedly generated major crises between itself and its own population. The most recent conflict has only been the largest, and has taken on regional and even global dimensions. Among these are a massive refugee crisis and the emergence of transnational terrorist groups that have launched attacks across the world.

The actions of the Syrian government and foreign powers have corrupted the country’s original 2011 democratic uprising and led to a situation where Syria is occupied by foreign armies and militia volunteers, as well as international jihadists who have migrated to areas outside of government control. After these calamities, many Syrians say that a return to the pre-uprising status quo is no longer possible.

“The Syrian regime knows that it is no longer strong enough to maintain control over the entire country on its own, and it is dependent on foreign ground forces to do so, including Iranian, Lebanese, Afghan, and Iraqi groups,” says Leila Shami, co-author of “Burning Country: Syrians in Revolution and War.” “But ultimately peace can’t be enforced through foreign occupation. Although people may be subdued for some time through terror and exhaustion, in the end there will always be resistance. We can’t go back to a time before 2011, because the regime, as it was, has collapsed.” 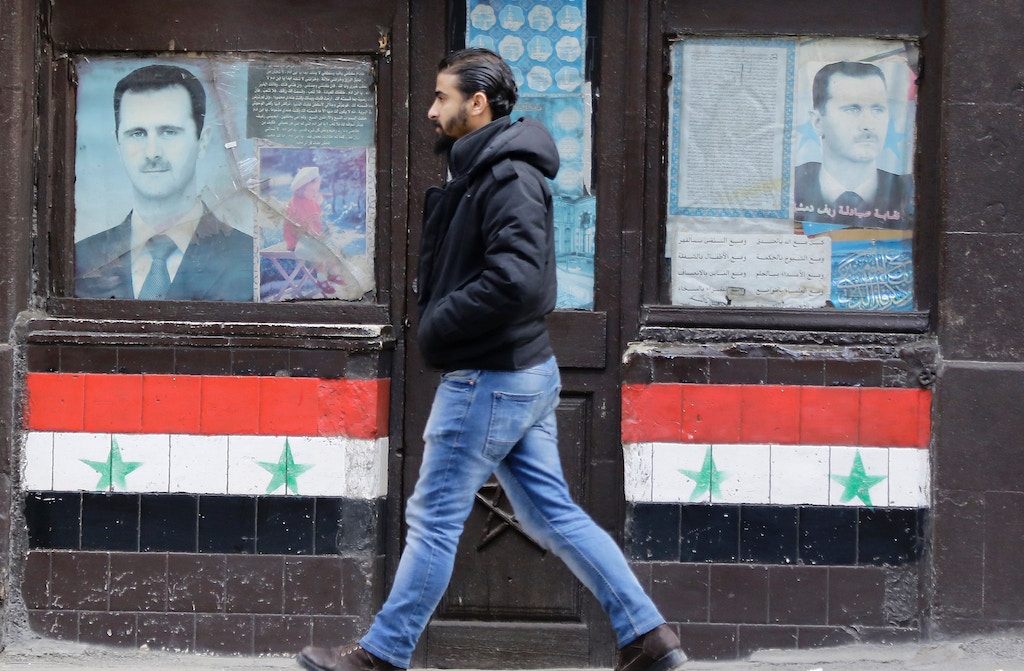 A Syrian man walks past posters of Syrian President Bashar al-Assad on a shop front in the capital, Damascus, on Jan. 3, 2017.

The unsustainable nature of the Assad regime’s rule, and the folly of continuing to prop it up into the future, can only be understood in the context of modern Syrian history. The current cataclysm of violence is only the most recent, bloodiest chapter in a long battle by the ruling family and its allies to maintain absolute political power. In the late 1970s and early 1980s, a previous attempt by a diverse group of opposition factions to challenge the Assad regime was met with brutal violence and repression, culminating in a major military assault by the regime on Muslim Brotherhood factions based in the city of Hama in 1982.

The attack on Hama is estimated to have killed between 10,000 and 40,000 people. It also leveled much of the city itself, making it the first of many ancient Syrian cities that would be destroyed by the Assad regime. But the brutality of that “victory” by the regime against segments of its own population planted the seeds for the even bloodier confrontations in the future. Raphael Lefevre, in his 2013 book about the Syrian Muslim Brotherhood, “Ashes of Hama,” points out that much of today’s conflict has been animated by a desire to avenge abuses committed by the regime in those years. Citing in particular the memory of the Hama massacre, he writes:

Analysts were right to point out the memory of the massacre in the hearts and minds of the Syrian people. What they failed to see, however, was that this collective scar would not restrain Syrians from defying the regime that rules over them. Instead, it would fuel such a degree of resentment and anger that the uprisings which started in March 2011 [soon] spread throughout the country.

In the Aleppo countryside, a flashpoint in the current violence, Lefevre notes that “men in every village [can] recite the the names of men who were killed or disappeared” during the conflicts of the late 1970s and early 1980s. When protests broke out around the country in 2011, demonstrators took to the streets chanting that they will “not let the massacres of 1982 be repeated” and “forgive us Hama, we apologize.”

Hundreds of thousands of Syrians have been killed in the latest conflict, while millions more have been driven into exile as refugees. The ancient cities of Aleppo and Homs, inhabited for thousands of years, have followed Hama into violent oblivion. In 1982, then-Syrian ruler Hafiz al-Assad (the father of the current president) said that “what has happened in Hama has happened, and it is all over.” But the conflict had only paused, to emerge again with greater force.

Experts on the region say it is unrealistic to expect that most Syrians will resign themselves to being passively ruled by the government after this latest episode of bloodletting.

“When you have had years of such terrible, unprecedented, and mostly one-sided massacres perpetrated by the regime, it’s not possible to imagine that there could be any lasting end to the war in Syria, as long as that same regime remains in power,” says Achcar. “Even if the regime and its allies succeed in forcing the opposition to agree to some kind of settlement where Assad stays, the situation will remain completely unstable, because his regime is at its core very weak and survives only due to Iranian and Russian support.”

Achcar says that the upcoming talks in the capital of Kazakhstan offer an opportunity to bring an end to the conflict, but only if Russia and the United States can pressure the Syrian regime to agree to power-sharing and a genuine transition of power in the country. That will also require continued pressure to ensure that the regime plays by the rules.

“Unless there are guarantees of political freedoms at the end of a transitional process within Syria, no part of the opposition will agree, and the fighting will inevitably continue,” Achcar says. “The key point is to what extent Russia, the United States and other parties are willing to impose such outcomes. If there is no plausible political settlement and there is just a big bluff to keep the regime as it is, it will not stop the war.”

The United States has increasingly taken a back seat in the diplomatic fight over Syria. But there are still meaningful steps that the U.S. can take to help the country return to stability, while providing some measure of accountability on human rights and other important issues. The lifting of U.S. sanctions on Syria and other steps towards normalization of relations can be predicated on political change, guarantees to human rights groups on the safety of any returning refugees, and accountability for tens of thousands of political prisoners who have disappeared into government custody, say Syrian activists.

But all of this would require exchanging Trump’s Assad-friendly rhetoric for an approach that rebuilds relations based on changes in how Syria is governed. The regime’s narrative that the only choices in Syria are dictatorship or extremist rule remains false, and ignores a long record of generating crises through us-or-them brutality.

Given Syria’s history, any conclusion to the most recent conflict that doesn’t guarantee democratic change will almost certainly give rise to another round of violence in the future.

“People from the outside are only looking at the geopolitical dimensions of this conflict, but for Syrians this is very personal,” says Leila Shami. “Many of them have had their sons and fathers killed by the regime, or witnessed their daughters and wives raped by the Syrian Army. Millions more have been forced out of their homes and land and have lost everything. The idea that these people will just give up and decide that being ruled by Assad is the best option is never going to happen.”

Top photo: Members of the Syrian Civil Defense, known as the White Helmets, evacuate a child during a training session in the rebel-held eastern Ghouta area, east of the capital, Damascus, on Nov. 22, 2016.