Treasury Pick Steve Mnuchin Denies It, But Victims Describe His Bank as a Foreclosure Machine

Mnuchin complained to senators that he has “been maligned as taking advantage of others’ hardships in order to earn a buck.” Treasury Secretary nominee Steve Mnuchin kicked off his confirmation hearing Thursday with a defiant opening statement, mostly defending his record as CEO of OneWest Bank. He cast himself as a tireless savior for homeowners after scooping up failed lender IndyMac. “It has been said that I ran a ‘foreclosure machine,’” he said. “I ran a loan modification machine.”

But in stark contrast to his fuzzy statistics about attempted loan modifications, the victims of OneWest’s foreclosure practices have been real and ubiquitous.

A TV advertising campaign that’s been running in Nevada, Arizona, and Iowa features Lisa Fraser, a widow who says OneWest “lied to us and took our home” of 25 years, right after her husband’s funeral.

And on Wednesday, four women appeared at a congressional forum organized by Sen. Elizabeth Warren, relaying their stories of abuse at the hands of OneWest. Democrats had hoped to present the homeowners as witnesses at Mnuchin’s confirmation hearing, but were denied by Senate Finance Committee Chair Orrin Hatch.

The women’s stories share a remarkable symmetry to those of nearly a dozen OneWest homeowners reviewed by The Intercept over the past several days. They paint a picture of a bank that did more to trap customers than to help them through their mortgage troubles.

Mnuchin complained to senators that he has “been maligned as taking advantage of others’ hardships in order to earn a buck. Nothing could be further than the truth.” 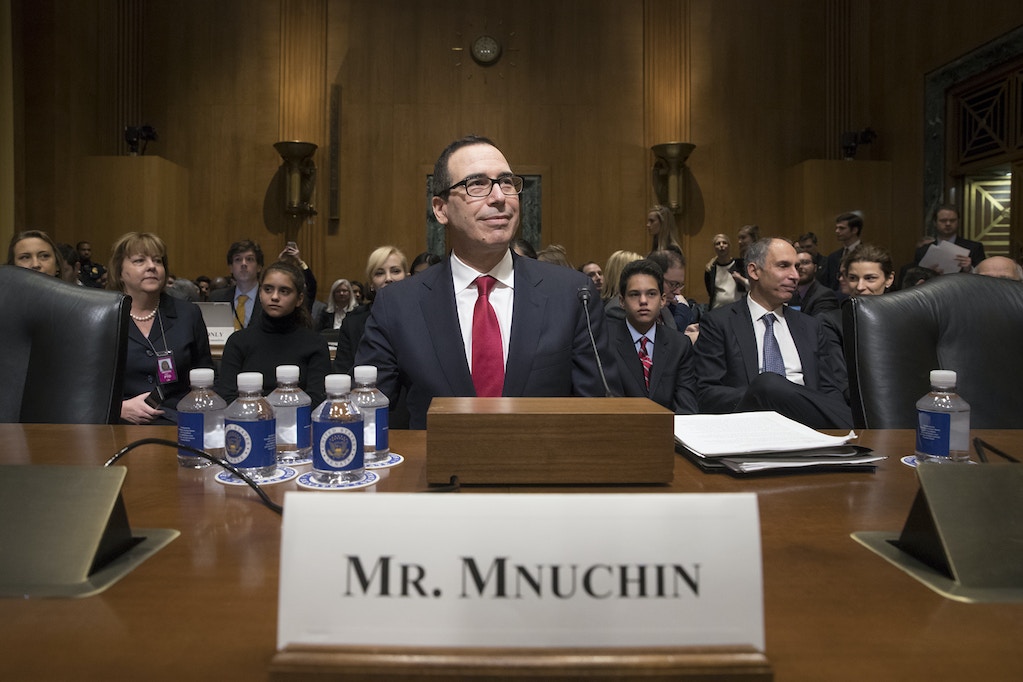 Treasury Secretary-designate Stephen Mnuchin arrives on Capitol Hill on Thursday, Jan. 19, 2017, to testify at his confirmation hearing before the Senate Finance Committee.

But the evidence to support that conclusion is considerable.

Heather McCreary of Sparks, Nevada, one of the four individuals in Washington to testify on Wednesday, was laid off from her job as a home health care provider in 2009. She and her family sought a modification from OneWest as they recovered from the lost wages. OneWest did modify the loan, one of the “over 100,000” such modifications Mnuchin touted in his hearing. But after six months of making modified payments, the bank denied McCreary’s personal check, claiming that the payment had to be made by cashier’s check. “I looked at the paperwork, and couldn’t find that on there,” McCreary said. “The Legal Aid person working with us couldn’t find it.”

OneWest told McCreary to re-apply for the modification twice, then cut off all communications and refused to accept payments. “A few months later we had a foreclosure notice taped to the window, with two weeks to get out,” she said. The bank was pursuing foreclosure while negotiating a modification — a practice known as dual tracking that is now illegal.

Tara Inden, an actress from Hollywood, California, couldn’t get a loan modification from OneWest after multiple attempts. Even after finding a co-tenant willing to pay off her amount due, OneWest refused the money and pursued foreclosure. Inden has fended off four different foreclosure attempts, including one instance when she returned home to find a locksmith breaking in to change the locks. “I took a picture of the work order, it said OneWest Bank on it,” Inden said. “I called the police, they said what do you want us to do, that’s the bank.”

Inden remains in the home today. OneWest gave her $13,000 as part of the Independent Foreclosure Review, a process initiated by federal regulators forcing OneWest and other banks to double-check their foreclosure cases for errors. Inden received no explanation for why she received the money, but sees it as a tacit admission that OneWest violated the law in her case.

Tim Davis of Northern Virginia had a mysterious $14,479 charge added to his loan’s escrow balance on multiple occasions, even after a U.S. Bankruptcy Court ordered it removed. “I don’t think that Mr. Mnuchin should be put in a position of government power without further scrutiny,” Davis said in an email.

Donald Hackett of Las Vegas claimed in legal filings that OneWest illegally foreclosed on them without being the true owner of his loan. He ended up losing the case, and the home. “They had to cheat to beat me,” Hackett alleged. “They came in like union busters to try to bust everybody up and scare you, make you afraid.”

While Hackett was unsuccessful, Mnuchin’s bank has been accused by investigators at the California attorney general’s office of “widespread misconduct” in foreclosure operations, with over a thousand violations of state statutes. The state attorney general, now-Sen. Kamala Harris, decided not to prosecute OneWest for the violations.

Teena Colebrook, an office manager from Hawthorne, California, came to prominence as a Trump supporter disgusted by the Mnuchin selection. She lost her home to OneWest in April 2015, after a yearslong battle that began with the loss of renters who shared the property. Colebrook was informed that the only way she could receive help from OneWest was if she fell 90 days behind on her mortgage payments. This was not true: qualifying for the government’s Home Affordable Modification Program, or HAMP, did not require delinquency, only a risk of default.

“They won’t tell you in writing and they’ll claim they never said that,” Colebrook said. She found robo-signed documents in her file, had insurance policies force-placed onto her loan unnecessarily, and kept getting conflicting statements about how much she actually owed. Late fees piled up, like outsized certified mailing costs of $2,000, all appended to her loan. She eventually ran out of appeals. “They wanted my property, wouldn’t accept any tender offers,” Colebrook said. “They stole my equity. That’s why I’m so angry. If [Mnuchin] can’t get one person’s figures right, how can he be in charge of the Treasury?”

Colebrook put together a complaint group on the Internet to share stories with other sufferers of OneWest. She found multiple people who said they were told to miss payments and then shoved into foreclosure. Others said they were put through year-long trial modifications (under HAMP they were only supposed to be three months long) and then denied a permanent modification, with an immediate demand for the difference between the trial payment and original payment, which could stretch into thousands of dollars. Others lost homes held by their families for decades.

These stories are familiar to those who experienced the aftermath of the financial crisis. OneWest was neither special nor unique in its urgency to foreclose and unwillingness to extend help to the broad mass of struggling borrowers. But Mnuchin’s nomination has put the spotlight back on a forgotten scandal of deception.

Wednesday’s unofficial hearing was the first in Congress in several years featuring homeowners. In the hearing room, Heather McCreary sat next to Colleen Ison-Hodroff, an 84-year-old widow from Minneapolis asked by OneWest to pay off the full balance due on her residence a few days after her husband’s funeral. Ison-Hodroff said OneWest could kick her out of her home of 54 years at any time. “Allowing an 84 year-old woman to be foreclosed on is not the American way,” McCreary said.

When OneWest foreclosure victims heard that Mnuchin was chosen to lead the Treasury Department, they were shocked. “When he was nominated, it was like the floor crashed underneath me,” said McCreary. “It brought back everything. His name was on my paperwork.”

Other victims offered similar remarks. “For someone who will be tasked with making sure that the economy is doing all it can for people like me, even when it seems the system is rigged against them, Steve Mnuchin is not that person,” said forum participant Cristina Clifford, who lost her condo in Whittier, California, after also being told by OneWest to fall behind on payments.

“I think the first thing is he belongs in a prison,” said Tara Inden.

The Mnuchin nomination can only be derailed through Republican opposition, which is relatively unlikely. But it has set off a new wave of activism nationwide.

Activists have been camped out at Goldman Sachs’s New York City headquarters since Tuesday, targeting Mnuchin’s former employer of 17 years. In an echo of a protest to save her home in 2011, OneWest customer Rose Mary Gudiel of La Puente, California, led a march in the rain to Mnuchin’s Bel-Air mansion on Wednesday night, placing furniture on his driveway before police dispersed roughly 60 activists. (Mnuchin famously scrubbed his address off the internet after the 2011 protest, saying his family was subjected to “public ire at the banking industry.” But the same organizers found his house again.)

“I put it in the middle of a resurgence of housing justice activism,” said Amy Schur of the Alliance of Californians for Community Empowerment. “Hard-hit communities are organizing across the country like they haven’t in years. Sometimes we might have kept eyes on the powers that be locally, but with the likes of Trump and this cabinet, we have to take this fight nationally as well.”