What’s the price of “Liberty”? At Donald Trump’s inaugural balls, a lot more than “Freedom”. Donald Trump’s team billed the Liberty and Freedom inaugural balls as populist celebrations, open to the general public for as little as $50 a ticket. The balls were supposed to be “the most affordable in recent history, ensuring that they are accessible to the American people,” according to a January 17 release from the President’s Inaugural Committee.

But internal documents obtained by The Intercept show that the Liberty Ball was a more exclusive affair for high-dollar donors. Smaller donors were diverted to the much larger Freedom Ball.

The Liberty Ball’s 8,000 attendees were listed as “Donors over $TBD/ Foreign Diplomats/ Cabinet Officials & Appointments/ US Senators and Congressmen/ Family and Friends.”

In late December, following a “behind the scenes tour” of the inaugural committee, the pro-Trump Breitbart website wrote that Trump’s inauguration would be focused on “regular working class people across the country.” The Washington Post also suggested that the balls would be low-cost, populist events, repeating a spokesman’s message that ticket prices would be kept low “so that working-class Americans who helped fuel Trump’s victory can take part.” 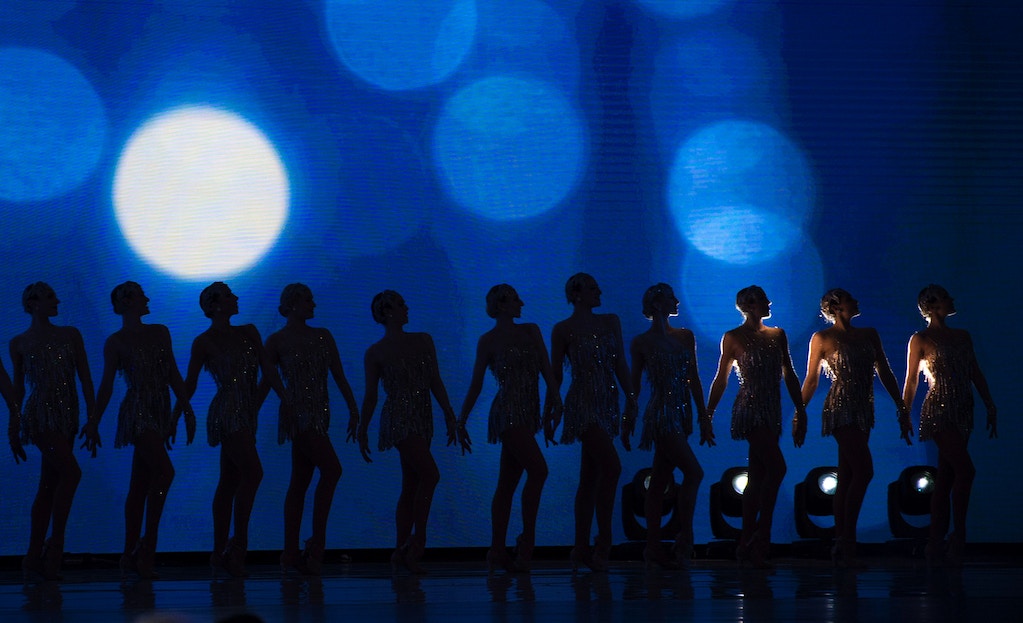 The Radio City Rockettes perform at the Liberty Ball following Donald Trump’s inauguration as the 45th President of the United States, in Washington on Jan. 20, 2017.

In fact, Trump’s inauguration, which reportedly raised $100 million from private donors, did little to change Washington’s traditional intermingling of money and power. On Friday, five hours after Trump took the presidential oath, The Intercept published documents showing that at least 12 mega-donors and fundraisers were given platform seats, where they sat beside former presidents and members of the Supreme Court. Here’s how the Liberty Ball was described: In one of the Liberty Ball’s VIP areas, former Texas Gov. Rick Perry, Trump’s pick to lead the Department of Energy, chatted with reality star and transgender activist Caitlyn Jenner:

This was the scene there during the “first dance”:

The Freedom Ball may have been attended by at least some of the “working class-Americans” whom the Post suggested Trump would be treating with such largesse:

It is unclear how many $50 tickets were ultimately distributed by the inaugural committee. Sara Armstrong, CEO of the inaugural committee, directed The Intercept to Boris Epshteyn, an inauguration spokesman who now works in the White House. Epshteyn directed The Intercept’s questions to the White House press office, which did not return an email seeking comment.

The new documents contain additional details regarding the “underwriter benefits” packages described in a donor solicitation document that surfaced in late November. According to that document, individuals and corporations who contributed $1 million or more to the inauguration received tickets to a three-day package of parties, the most exclusive of which was a “leadership luncheon.” Each million-dollar donor received four tickets to the luncheon:

Floor plans for the luncheon show seating for 600.

The luncheon took place on Thursday at the Trump International Hotel at the Old Post Office at Washington. It appears that Trump’s hotel catered the event: Trump employees with “trumphotels.com” email addresses are listed for the event as catering and venue contacts.

The sample menu at the “Vice President’s Inaugural Dinner,” reserved for donors who contributed $500,000 or more, was rather fancy: One “Guest of Honor” at this event was Lew Eisenberg, a former Goldman Sachs executive. He now serves as the Republican National Committee’s finance chairman. A timeline for the dinner shows that he served as emcee.

An “Events Grid” marked confidential gives a five-day overview of the inauguration, including the swearing in, the parade, and a private wreath-laying ceremony at Arlington National Cemetery. Out of 20 events, 9 note the presence of donors. Notably, Saturday’s National Prayer Service at Washington National Cathedral appears to have been attended by 600 of Trump’s “friends and family” and 350 of Pence’s “friends and family” but “no donors.”