Get Ready for the First Shocks of Trump’s Disaster Capitalism

To understand what’s coming from the Trump administration, all that’s required is a little recent history.

We already know that the Trump administration plans to deregulate markets, wage all-out war on “radical Islamic terrorism,” trash climate science and unleash a fossil-fuel frenzy. It’s a vision that can be counted on to generate a tsunami of crises and shocks: economic shocks, as market bubbles burst; security shocks, as blowback from foreign belligerence comes home; weather shocks, as our climate is further destabilized; and industrial shocks, as oil pipelines spill and rigs collapse, which they tend to do, especially when enjoying light-touch regulation.

All this is dangerous enough. What’s even worse is the way the Trump administration can be counted on to exploit these shocks politically and economically.

Naomi Klein explains how the Trump administration might take advantage of coming crises to Jeremy Scahill at the Women’s March, Jan. 21, 2017.

Speculation is unnecessary. All that’s required is a little knowledge of recent history. Ten years ago, I published “The Shock Doctrine,” a history of the ways in which crises have been systematically exploited over the last half century to further a radical pro-corporate agenda. The book begins and ends with the response to Hurricane Katrina, because it stands as such a harrowing blueprint for disaster capitalism.

That’s relevant because of the central, if little-recalled role played by the man who is now the U.S. vice president, Mike Pence. At the time Katrina hit New Orleans, Pence was chairman of the powerful and highly ideological Republican Study Committee. On September 13, 2005 — just 14 days after the levees were breached and with parts of New Orleans still underwater — the RSC convened a fateful meeting at the offices of the Heritage Foundation in Washington, D.C.

Under Pence’s leadership, the group came up with a list of “Pro-Free-Market Ideas for Responding to Hurricane Katrina and High Gas Prices” — 32 policies in all, each one straight out of the disaster capitalism playbook.

Vehicles form a line at an Exxon gas station off of Interstate 55 in Jackson, Miss., Aug. 30, 2005. The station was one of the few in the city with both power and gas one day after Hurricane Katrina made landfall.

To get a sense of how the Trump administration will respond to its first crises, it’s worth reading the list in full (and noting Pence’s name right at the bottom).

What stands out in the package of pseudo “relief” policies is the commitment to wage all-out war on labor standards and on the public sphere — which is ironic because the failure of public infrastructure is what turned Katrina into a human catastrophe. Also notable is the determination to use any opportunity to strengthen the hand of the oil and gas industry.

The first three items on the RSC list are “automatically suspend Davis-Bacon prevailing wage laws in disaster areas,” a reference to the law that required federal contractors to pay a living wage; “make the entire affected area a flat-tax free-enterprise zone”; and “make the entire region an economic competitiveness zone (comprehensive tax incentives and waiving of regulations).”

Another demand called for giving parents vouchers to use at charter schools, a move perfectly in line with the vision held by Trump’s pick for education secretary, Betsy DeVos.

All these measures were announced by President George W. Bush within the week. Under pressure, Bush was eventually forced to reinstate the labor standards, though they were largely ignored by contractors. There is every reason to believe this will be the model for the multibillion-dollar infrastructure investments Trump is using to court the labor movement. Repealing Davis-Bacon for those projects was reportedly already floated at Monday’s meeting with leaders of construction and building trade unions.

Back in 2005, the Republican Study Committee meeting produced more ideas that gained presidential support. Climate scientists have directly linked the increased intensity of hurricanes to warming ocean temperatures. This connection, however, didn’t stop Pence and the RSC from calling on Congress to repeal environmental regulations on the Gulf Coast, give permission for new oil refineries in the United States, and to greenlight “drilling in the Arctic National Wildlife Refuge.”

All these measures are a surefire way to drive up greenhouse gas emissions, the major human contributor to climate change, yet they were immediately championed by the president under the guise of responding to a devastating storm.

The oil industry wasn’t the only one to profit from Hurricane Katrina, of course. So did a slew of well-connected contractors, who turned the Gulf Coast into a laboratory for privatized disaster response.

The companies that snatched up the biggest contracts were the familiar gang from the invasion of Iraq: Halliburton’s KBR unit won a $60 million gig to reconstruct military bases along the coast. Blackwater was hired to protect FEMA employees from looters. Parsons, infamous for its sloppy Iraq work, was brought in for a major bridge construction project in Mississippi. Fluor, Shaw, Bechtel, CH2M Hill — all top contractors in Iraq — were hired by the government to provide mobile homes to evacuees just 10 days after the levees broke. Their contracts ended up totaling $3.4 billion, no open bidding required.

And no opportunity for profit was left untapped. Kenyon, a division of the mega funeral conglomerate Service Corporation International (a major Bush campaign donor), was hired to retrieve the dead from homes and streets. The work was extraordinarily slow, and bodies were left in the broiling sun for days. Emergency workers and local volunteer morticians were forbidden to step in to help because handling the bodies impinged on Kenyon’s commercial territory.

And as with so many of Trump’s decisions so far, relevant experience often appeared to have nothing to do with how contracts were allocated. AshBritt, a company paid half a billion dollars to remove debris, reportedly didn’t own a single dump truck and farmed out the entire job to contractors. 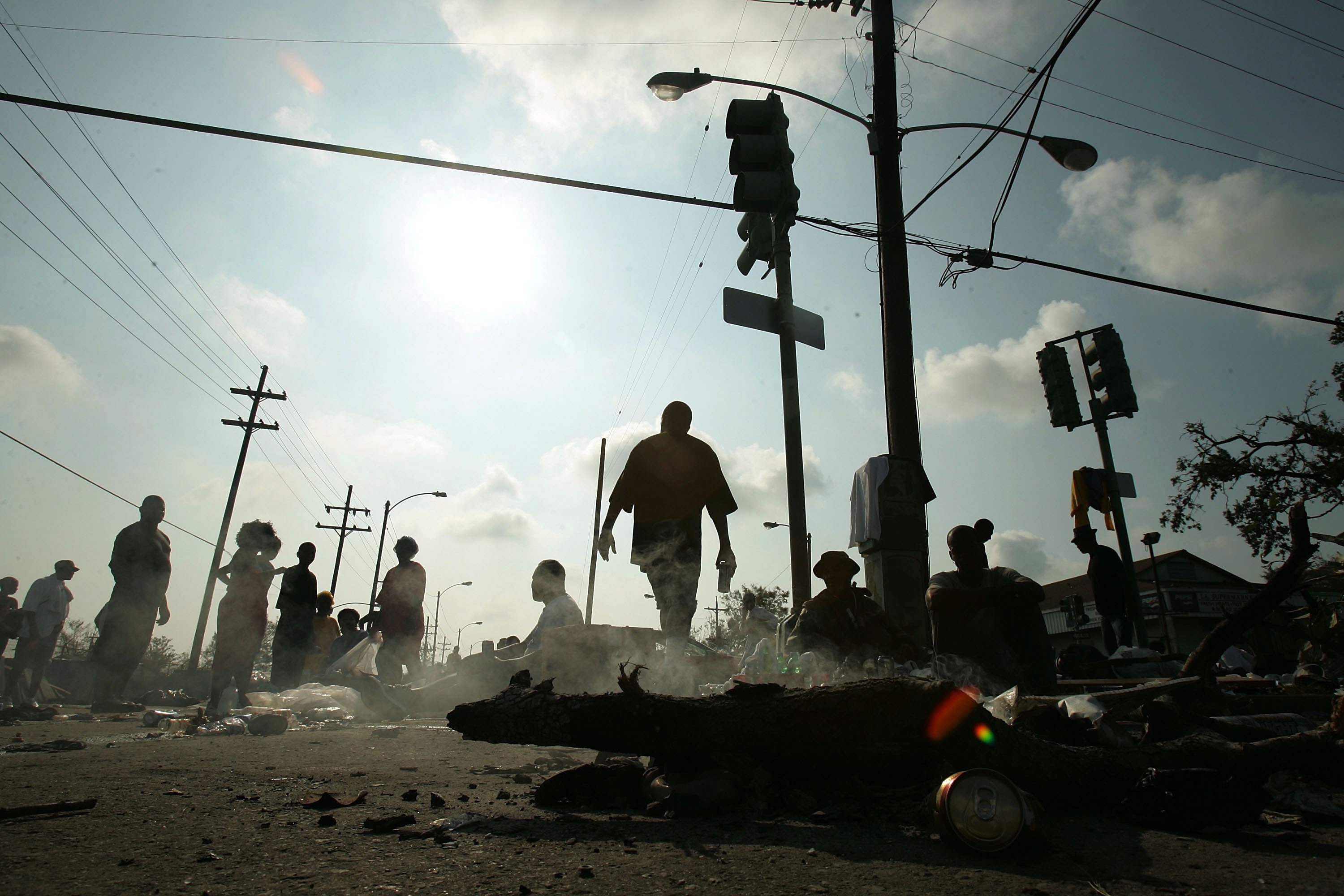 People wait for assistance after being rescued from their homes a day earlier in the Ninth Ward as a small fire burns after Hurricane Katrina, Aug. 31, 2005, in New Orleans.

Even more striking was the company that FEMA paid $5.2 million to perform the crucial role of building a base camp for emergency workers in St. Bernard Parish, a suburb of New Orleans. The camp construction fell behind schedule and was never completed. When the contractor was investigated, it emerged that the company, Lighthouse Disaster Relief, was actually a religious group. “About the closest thing I have done to this is just organize a youth camp with my church,” confessed Lighthouse’s director, Pastor Gary Heldreth.

After all the layers of subcontractors had taken their cut, there was next to nothing left for the people doing the work. For instance, the author Mike Davis tracked the way FEMA paid Shaw $175 a square foot to install blue tarps on damaged roofs, even though the tarps themselves were provided by the government. Once all the subcontractors took their share, the workers who actually hammered in the tarps were paid as little as $2 a square foot. “Every level of the contracting food chain, in other words, is grotesquely overfed except the bottom rung,” Davis wrote, “where the actual work is carried out.”

In Mississippi, a class-action lawsuit forced several companies to pay hundreds of thousands of dollars in back wages to immigrant workers. Some were not paid at all. On one Halliburton/KBR job site, undocumented immigrant workers reported being wakened in the middle of the night by their employer (a sub-subcontractor), who allegedly told them that immigration agents were on their way. Most workers fled to avoid arrest.

This corruption and abuse is particularly relevant because of Trump’s stated plan to contract out much of his infrastructure spending to private players in so-called public-private partnerships.

In the Katrina aftermath, the attacks on vulnerable people, carried out in the name of reconstruction and relief, did not stop there. In order to offset the tens of billions going to private companies in contracts and tax breaks, in November 2005 the Republican-controlled Congress announced that it needed to cut $40 billion from the federal budget. Among the programs that were slashed were student loans, Medicaid, and food stamps. In other words, the poorest people in the United States subsidized the contractor bonanza twice: first, when Katrina relief morphed into unregulated corporate handouts, providing neither decent jobs nor functional public services; and, second, when the few programs that directly assist the unemployed and working poor nationwide were gutted to pay those bloated bills. 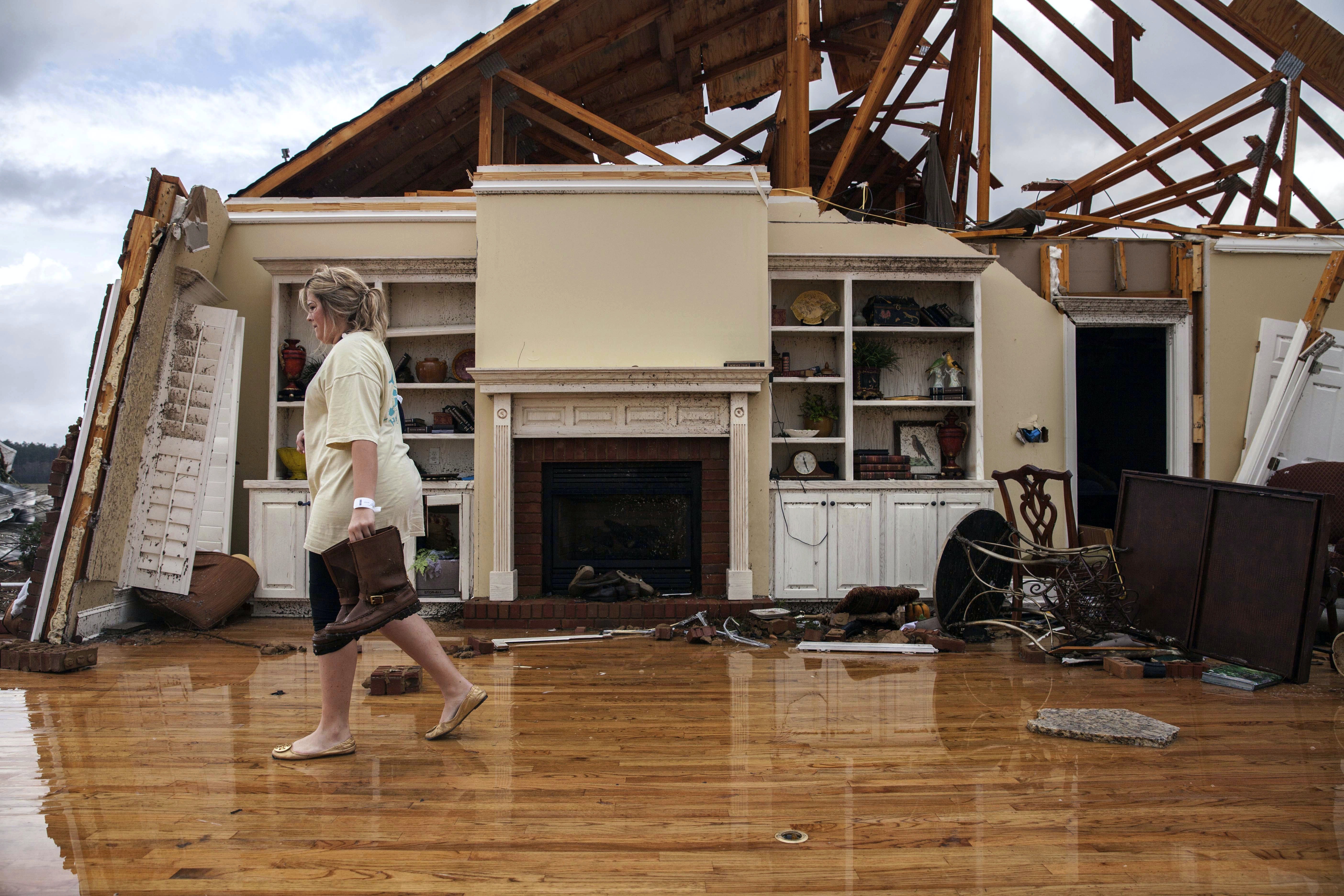 This is the disaster capitalism blueprint, and it aligns with Trump’s own track record as a businessman all too well.

Trump and Pence come to power at a time when these kinds of disasters, like the lethal tornadoes that just struck the southeastern United States, are coming fast and furious. Trump has already declared the U.S. a rolling disaster zone. And the shocks will keep getting bigger, thanks to the reckless policies that have already been promised.

What Katrina tells us is that this administration will attempt to exploit each disaster for maximum gain. We’d better get ready.

Portions of this article were adapted from “The Shock Doctrine: The Rise of Disaster Capitalism.”

Top photo: In this 2005 photograph, a man watches a house burn on Napoleon St. as helicopters try to extinguish the fire in Hurricane Katrina-ravaged New Orleans.