Members of Donald Trump’s Mar-a-Lago club were treated to impromptu dinner theater as the new president handled a crisis in full view of fellow diners. Paying members of Donald Trump’s Mar-a-Lago club in Palm Beach were treated to some impromptu dinner theater this weekend as the new president handled a national security crisis in full view of fellow diners on the resort’s terrace.

This photo taken from my instagram TL seems to capture one of the moments described in this @CNN piece https://t.co/czixCjPox1 pic.twitter.com/OkiAkUcWdE

Apparently untroubled by the possibility that foreign intelligence services might have made the minimal effort required to plant operatives among the guests, or wait staff, Trump was photographed discussing North Korea’s surprise missile test with Prime Minister Shinzo Abe of Japan as waiters removed dishes and aides used their phone flashlights to illuminate sensitive documents.

A screenshot from Facebook of Donald Trump, president of the United States, speaking with Shinzo Abe, Japan’s prime minister, on Saturday night in Palm Beach.

Several images of the spectacle were posted on Facebook a short time later by a new member of the club, Richard DeAgazio, who paid Trump $200,000 to join Mar-a-Lago in December, when it was clear that one of the perks would be access to the new president of the United States. 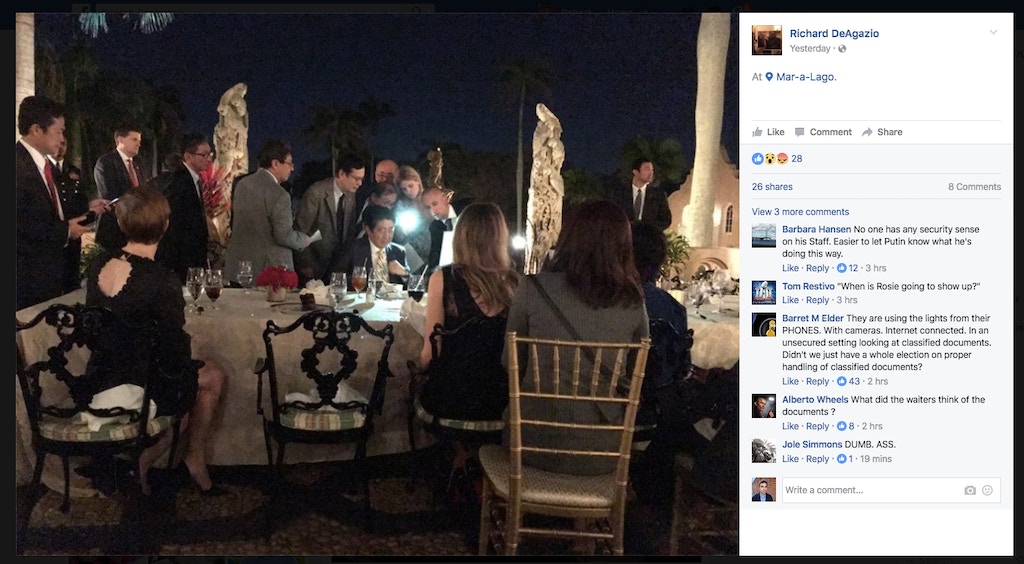 A screenshot from Facebook shows Prime Minister Shinzo Abe of Japan looking at documents alongside President Trump, illuminated by an aide’s phone.

After DeAgazio cheerfully described to the Washington Post his untrammeled view of the crisis being discussed in public — and said that Trump dining on the terrace, with the club members, “just shows that he’s a man of the people” — he changed the settings on his Facebook profile to make the images private. Having made them public for more than 12 hours, however, ensured that screenshots were made by journalists and, one would expect, every foreign intelligence agency of even minimal competence.

This is why membership dues at Mar-a-Lago doubled. The members are buying tickets to the US national security show. pic.twitter.com/zRLARPu4Zd

One of DeAgazio’s images, of Trump using a phone at the dinner table, reminded Phillip Bump of the Washington Post that the new president still appears to be using an old, insecure Android phone to take calls and post tweets, despite the fact that this device could very easily be hacked and used to spy on him. A screenshot from Facebook of Donald Trump speaking on a mobile phone during a working dinner with Japan’s prime minister at his Palm Bach club on Saturday.

Trump’s lax approach to secure communications drew comment from those old enough to remember the presidential campaign of 2016, when his main argument was that Hillary Clinton should be jailed for having used a private email account as secretary of state.

One of these things is not like the other... pic.twitter.com/krnIWtZURv

One smartphone app, for flashlights, has even been used by Chinese spies.

Tommy Vietor, a former National Security Council spokesperson for President Obama, pointed to another vulnerability exposed by the scene at Mar-a-Lago: the possibility that waiters at the club, who continued dinner service during the discussion of North Korea’s missile test, could be recruited by foreign intelligence services.

Collecting intelligence on the US president is now as simple as paying off a Mar-a-Lago waiter.

For a clue as to just how easy that might be, consider that the Palm Beach Post reported in December that Mar-a-Lago hires dozens of temporary foreign workers each year, using the federal government’s H-2B visa program.

It was not immediately clear where the foreign workers at Mar-a-Lago come from, but another club in the area told members that workers hired under the same visa program come from Romania, Ireland, and South Africa.