The lawsuit adds to a growing list of concerns for Puzder as he heads into his Thursday confirmation hearing. The company run by Andy Puzder, who President Trump has nominated for secretary of labor, ran an illegal wage-fixing scheme for managers at his company’s restaurants, according to a class-action lawsuit filed in California superior court last week.

Puzder is the CEO of the vast Carl Karcher Enterprises (CKE) fast-food chain. One former and one current Carl’s Jr. shift leader allege that franchisees – which Puzder has repeatedly described as independent businesses — colluded with one another to prevent managers from moving between restaurants.

As alleged, the scheme also appears to violate federal law under the Sherman Antitrust Act, as an illegal restraint of trade. That would be a felony punishable by a $1 million fine and up to 10 years in prison for individuals charged.

For Puzder, the lawsuit adds to a growing list of concerns heading into his Thursday confirmation hearing. Puzder, who has not secured the support of enough Republicans to guarantee his confirmation, delayed his hearing four times to get his financial disclosures in order; admitted to employing an undocumented housekeeper; and worked under the tutelage of a notorious mob lawyer. His ex-wife appeared on Oprah in disguise in the 1990s to discuss domestic violence incidents in their marriage; senators in both parties have viewed the footage, and divorce records, which include additional allegations of assault, were unsealed on Tuesday.

But the class-action suit filed February 8 in Los Angeles, part of a pattern of alleged labor violations at Carl Karcher Enterprises (CKE) restaurant chains, speaks to the very issues that Puzder would oversee at the Labor Department. Puzder has already proven himself an outspoken critic of the minimum wage, expanded overtime laws and workplace safety rules, and the case charges that under Puzder’s leadership, CKE again violated worker rights.

The lawsuit attempts to show that CKE, which owns the Carl’s Jr., Hardee’s, Green Burrito, and Red Burrito brands, undermined workers’ ability to thrive in the free market that Puzder cherishes so much in public. Andy Puzder, president of CKE Restaurants, is photographed at a Carls Jr. Restaurant.

“There’s one system in the history of the world that produces enough economic growth to meaningfully reduce poverty and meaningfully increase opportunity, and that’s free market capitalism,” the lawsuit quotes Puzder as saying in a television appearance.

But franchisees of Carl’s Jr. and Hardee’s deliberately restrict the free market for workers through “no-hire” agreements. CKE franchisees “will not knowingly employ or seek to employ any person then employed by [Carl’s Jr.] or any franchisee of [Carl’s Jr.] as a shift leader or higher, or otherwise directly or indirectly induce such person to leave his or her employment without prior written consent,” according to a preliminary franchising agreement quoted in the lawsuit.

This makes workers unable to threaten to leave for another CKE outlet at a higher wage. Because the CKE system is specialized, and franchisees are encouraged to promote from within, this hampers restaurant managers’ bargaining power. “The market for CKE employees is not free,” the lawsuit states.

The lawsuit cleverly plays on CKE’s insistence that individual franchisees are their own separate entities, in direct competition with one another.

In testimony before Congress, Puzder has said that all CKE franchisees make independent employment and operational decisions. “Our franchisees are not a division, subsidiary, or alter ego of CKE, but are truly independent small businessmen and businesswomen who know how to drive their own business,” Puzder told the House Education and the Workforce Committee in 2014.

CKE’s franchise disclosure agreement states that franchisees do not get an exclusive territory, and “may face competition from other franchisees” or “outlets that we own and/or operate.”

The parent company does this to avoid what is known as joint employer liability, so employees cannot hold them accountable for wage theft or hazardous working conditions. In other words: to avoid responsibility, CKE argues that the franchisees make their own decisions.

But competing CKE franchises cannot restrict employees from switching job locations to hold down wages. Shift leaders at CKE restaurants, the lowest level of manager, make just $10 an hour on average, according to the lawsuit. Plaintiffs argue that the no-hire agreement suppresses wages and worsens working conditions by drying up the market for CKE restaurant-level managers. “CKE and Puzder cannot have it both ways,” the lawsuit states. “They cannot eschew responsibilities under labor and employment laws by embracing a ‘free market’ model of independent franchisees, while restraining free competition to the detriment of thousands of workers.” 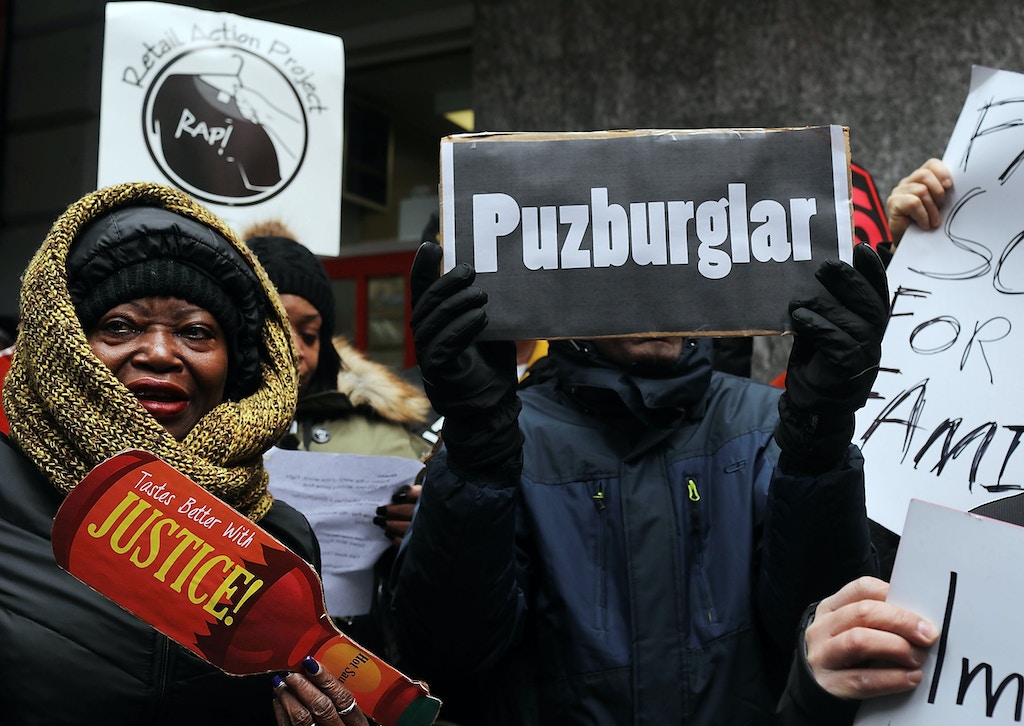 Protesters with NYC Fight for $15 gather in front of a McDonalds to rally against fast food executive Andrew Puzder, who is President Donald Trump’s nomination to lead the Labor Department on Feb, 13, 2017 in New York.

A similar lawsuit was filed against Uber last year, alleging price fixing between its nominally “independent” drivers, which Uber does not classify as employees.

Though filed in state court, the CKE case would apply to federal statutes as well. Section 1 of the Sherman Antitrust Act explicitly prohibits “horizontal” integration, where rival companies within the same sector collude to fix prices or wages. These practices are punished as felonies under federal law. Because CKE, Puzder’s company, is not only a franchisor but a participant in the market — directly owning 30 percent of the more than 3,400 CKE franchises as of 2012 — they would be liable along with the franchisees for wage-fixing.

The Justice Department just issued guidance last October warning of criminal penalties for anti-poaching violations. The state of California, where the lawsuit was filed and where CKE has a high density of franchises, also has criminal statutes against restraint of trade.

Luis Bautista, a Carl’s Jr. shift leader, and Margarita Guerrero, a former shift leader, filed the suit on behalf of all current and former CKE restaurant-level managers. Both allege long and unpredictable hours, heavy responsibilities, “atrocious” working conditions, and broken promises on wage increases. Bautista alleged that the no-hire agreement was common knowledge among shift leaders at CKE restaurants, and that employment applications explicitly asked about prior experience at other CKE franchises.

“Consistent with Puzder’s philosophy and CKE’s structure, the no hire agreement suppresses wages and working conditions to ensure that franchisees make money,” the lawsuit argues. They are seeking a permanent bar on the no hire agreement, along with restitution and damages.

CKE has paid millions of dollars in class-action settlements with its workers in the past. Its executive vice president and general counsel, Charles “Chip” Seigel, responded in a written statement that the lawsuit was “baseless” and “obviously intended to be an attempt, albeit a feeble one, to derail the nomination of Andy Puzder.”

Top photo: Protesters walk to a Hardee’s restaurant during a rally against Andrew Puzder’s nomination for labor secretary near the Hardee’s headquarters on Feb. 13, 2017, in St. Louis.