Foreign villains must always be omnipotent, and anyone questioning that must be disloyal.

For aspiring journalists, historians, or politically engaged citizens, there are few more productive uses of one’s time than randomly reading through the newsletters of I.F. Stone, the intrepid and independent journalist of the Cold War era who became, in my view, the nation’s first “blogger” even though he died before the advent of the internet. Frustrated by big media’s oppressive corporatized environment and its pro-government propaganda model, and then ultimately blacklisted from mainstream media outlets for his objections to anti-Russia narratives, Stone created his own bi-monthly newsletter, sustained exclusively by subscriptions, and spent 18 years relentlessly debunking propaganda spewing from the U.S. government and its media partners.

What makes Stone’s body of work so valuable is not its illumination of history but rather its illumination of the present. What’s most striking about his newsletters is how little changes when it comes to U.S. government propaganda and militarism, and the role the U.S. media plays in sustaining it all. Indeed, reading through his reporting, one gets the impression that U.S. politics just endlessly replays the same debates, conflicts, and tactics.

Much of Stone’s writings, particularly throughout the 1950s and into the 1960s, focused on the techniques for keeping Americans in a high state of fear over the Kremlin. One passage, from August 1954, particularly resonates; Stone explained why it’s impossible to stop McCarthyism at home when — for purposes of sustaining U.S. war and militarism — Kremlin leaders are constantly being depicted as gravely threatening and even omnipotent. Other than the change in Moscow’s ideology — a change many of today’s most toxic McCarthyites explicitly deny — Stone’s observations could be written with equal accuracy today.

If Communists are some supernatural breed of men, led by diabolic master minds in that distant Kremlin, engaged in a Satanic conspiracy to take over the world and enslave all mankind — and this is the thesis endlessly propounded by American liberals and conservatives alike, echoed night and day by every radio station and in every newspaper — the thesis no American dare any longer challenge without himself becoming suspect — then how to fight McCarthy?

If the public mind is to be conditioned for war, if it is being taught to take for granted the destruction of millions of human beings, few of them tainted with this dreadful ideological virus, all of them indeed presumably pleading for us to liberate them, how can we argue that it matters if a few possibly innocent men lose jobs or reputations because of McCarthy?

Two vital points stand out here: 1) the key to sustaining fears over foreign adversaries is depicting them as all-powerful and ubiquitous; and 2) once that image takes root, few will be willing to question the propaganda for fear of being accused of siding with the Foreign Evil: “the thesis no American dare any longer challenge without himself becoming suspect.”

This tactic — depicting adversaries as omnipotent super-villains — was key to the war on terror. Radical Muslims were not just violent threats; they were uniquely menacing, like Bond-film bad guys.

When photos emerged showing how the U.S. government was transporting terror suspect Jose Padilla to his trial by placing blackened goggles and earphones over his face, one U.S. commentator justified it by explaining it was necessary to prevent him from “blinking in code” to his terrorist comrades to activate plots. When asked why terror suspects were bound and gagged for long intercontinental flights to Guantánamo, a U.S. military official said that these were “people who would chew through a hydraulic cable to bring a C-17 down.” They possessed powers of dark magic and were lurking everywhere, even when you couldn’t see them. That’s the reason to fear them so much that one submits to any claim and any policy in the name of crushing them.

Few foreign villains have been vested with omnipotence and ubiquity like Vladimir Putin has been — at least ever since Democrats discovered (what they mistakenly believed was) his political utility as a bogeyman. There are very few negative developments in the world that do not end up at some point being pinned to the Russian leader, and very few critics of the Democratic Party who are not, at some point, cast as Putin loyalists or Kremlin spies:

Has there even been a more ubiquitous and omnipotent villain in history? pic.twitter.com/gLzvdcubBr 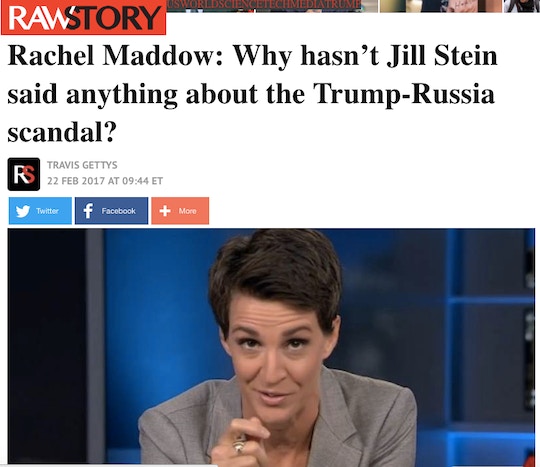 Putin — like al Qaeda terrorists and Soviet Communists before him — is everywhere. Russia is lurking behind all evils, most importantly — of course — Hillary Clinton’s defeat. And whoever questions any of that is revealing themselves to be a traitor, likely on Putin’s payroll.

As The Nation’s Katrina vanden Heuvel put it on Tuesday in the Washington Post: “In the targeting of Trump, too many liberals have joined in fanning a neo-McCarthyite furor, working to discredit those who seek to deescalate U.S.-Russian tensions, and dismissing anyone expressing doubts about the charges of hacking or collusion as a Putin apologist. … What we don’t need is a replay of Cold War hysteria that cuts off debate, slanders skeptics and undermines any effort to explore areas of agreement with Russia in our own national interest.” That precisely echoes what Stone observed 62 years ago: Claims of Russian infiltration and ubiquity are “the thesis no American dare any longer challenge without himself becoming suspect” (Stone was not just cast as a Kremlin loyalist during his life but smeared as a Stalinist agent after he died).

I’ve written extensively about all this throughout the last year, as Russia Fever reached (what I hope is) its apex — or, more accurately, its nadir. I won’t repeat that all here.

But I do want to draw attention to an outstanding article in today’s Guardian by the Russian-born American journalist Keith Gessen, in which he clinically examines — and demolishes — all of the hysterical, ignorant, fearmongering, manipulative claims now predominant in U.S. discourse about Russia, Putin, and the Kremlin.

The article begins: “Vladimir Putin, you may have noticed, is everywhere.” As a result, he points out, “Putinology” — which he defines as “the production of commentary and analysis about Putin and his motivations, based on necessarily partial, incomplete and sometimes entirely false information” — is now in great prominence even though it “has existed as a distinct intellectual industry for over a decade.” In sum, he writes: “At no time in history have more people with less knowledge, and greater outrage, opined on the subject of Russia’s president.”

It’s hardly unique for American media and political commentators to speak of foreign adversaries with a mix of ignorance and paranoia. But the role Putin serves above all else, he says, is to cast America’s problems not as its own doing but rather the fault of foreigners, and more importantly, to relieve the Democratic Party of the need to examine its own fundamental flaws and errors:

According to a recent report, Hillary Clinton and her campaign still blame the Russians — and, by extension, Barack Obama, who did not make a big issue of the hacks before November — for her electoral debacle. In this instance, thinking about Putin helps not to think about everything else that went wrong, and what needs to be done to fix it.

But while petty self-exoneration may be the prime motive, the far greater danger is how much this obsession distracts from, and distorts, the pervasive corruption of America’s ruling class. As Gessen writes:

If Donald Trump is impeached and imprisoned for conspiring with a foreign power to undermine American democracy, I will celebrate as much as the next American. And yet in the long run, the Russia card is not just bad politics, it is intellectual and moral bankruptcy. It is an attempt to blame the deep and abiding problems of our country on a foreign power. As some commentators have pointed out, it is a page from the playbook of none other than Putin himself.

As Adam Johnson detailed in the Los Angeles Times last week, the constant effort to attribute Trump to foreign dynamics is devoted to avoiding the reality that U.S. policy and culture is what gave rise to him. Nothing achieves that goal better than continually attributing Trump — and every other negative outcome — to the secret work of Kremlin leaders.

The game that establishment Democrats and their allies are playing is not just tawdry but dangerous. The U.S. political, media, military, and intelligence classes are still full of people seeking confrontation with Russia; included among them are military officials whom Trump has appointed to key positions.

As Stone observed in the 1950s, aggression toward and fearmongering over the Kremlin on the one hand, and smearing domestic critics of that approach as disloyal on the other, are inextricably linked. When one takes root, it’s very difficult to stop the other. And you can only propagate demonization rhetoric about a foreign adversary for so long before triggering, wittingly or otherwise, very dangerous confrontations between the two.

Top photo: Portrait of journalist I.F. Stone in his office in Washington in 1966.