Manafort has taken out home equity loans in an escalating series of transactions that includes one particularly large and unusual loan from a banker on Trump’s Economic Advisory Council. 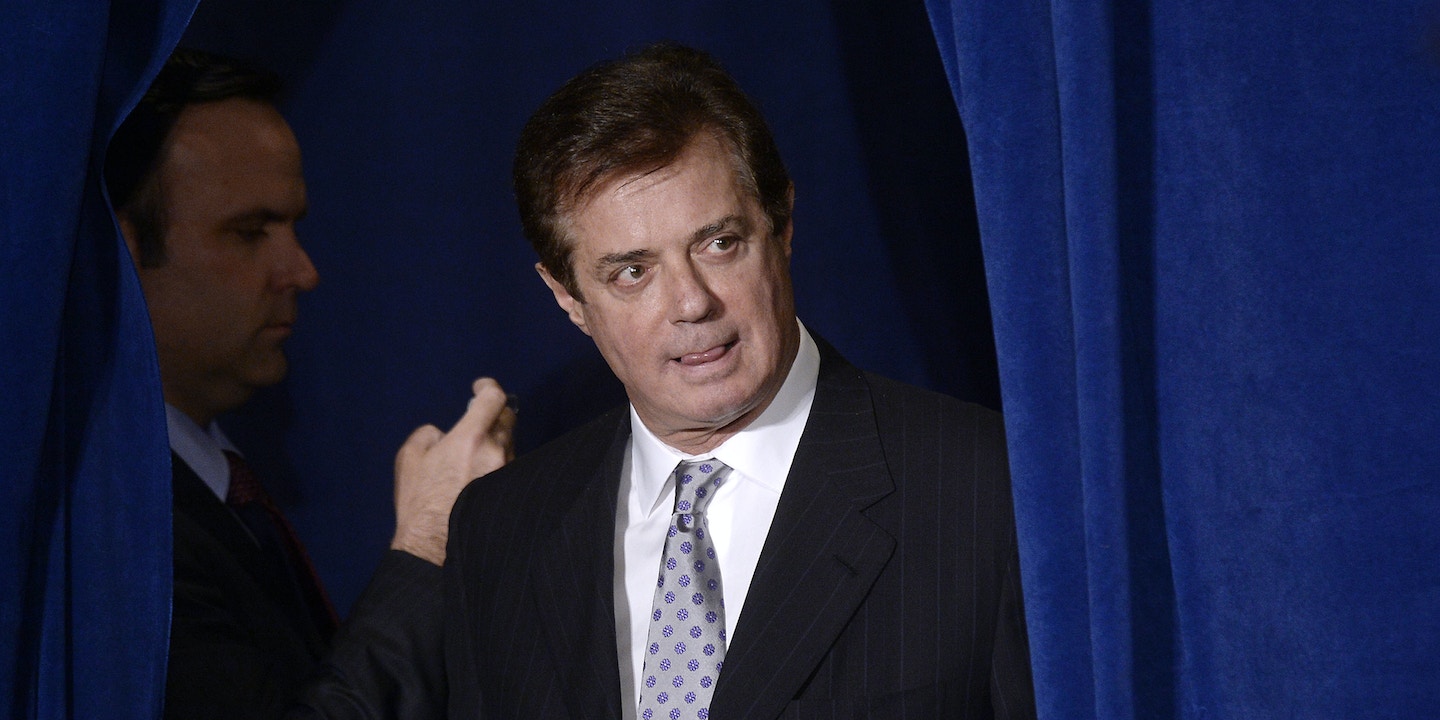 Paul Manafort, the former Donald Trump campaign manager who resigned over his lobbying work in Ukraine for the pro-Russian government, has taken out over $19 million in home equity loans in New York City in the past five years, in an escalating series of transactions that includes one particularly large and unusual loan from a banker on Trump’s Economic Advisory Council.

The loan data was compiled from public sources by two New York attorneys, Julian Russo and Matthew Termine, who published it on a blog. It’s not clear what Manafort is up to, but it’s almost certainly not what home equity loans are designed for, which is home improvement. “It feels like we’re seeing a small piece of the bigger picture here,” Russo told The Intercept.

The raw facts stand out for their strangeness. Since 2012, Manafort has taken out seven home equity loans worth approximately $19.2 million on three separate New York-area properties he owns through holding companies registered to him and his son-in-law Jeffrey Yohai, a real estate investor. They include a condo on 27 Howard Street in Manhattan, a condo in Trump Tower, and a four-story, two-unit brownstone in Brooklyn at 377 Union Street.

In 2012, Manafort took out a $1.5 million home equity loan on 27 Howard Street from First Republic Bank, through his limited liability company MC Soho Holdings. Four years later, Manafort paid off that loan and got another, even bigger one — for $2.73 million, from Citizens Bank.

Manafort got a $3 million mortgage loan against the Trump Tower property in 2015, issued by UBS Bank USA, which comes due in 2040.

And in March 2016, Manafort and his son-in-law Yohai purchased a pair of short-term mortgage loans on the 377 Union Street brownstone, worth a total of $5.3 million. The brownstone was listed in the name of MC Brooklyn Holdings, a limited liability company.

By June 1, the lender, Genesis Capital, had filed for foreclosure, alleging a missed payment. In January 2017, MC Brooklyn Holdings transferred the property to Manafort, and two weeks later, Federal Savings Bank, a small lender that normally caters to low and moderate-income military veterans, issued Manafort’s wife, Kathleen, a $5.3 million loan, evidently to cover the prior Genesis Capital mortgage, and an additional $1.3 million loan. The loan is also short term, due in January 2018.

This $6.6 million in loans to one customer represents roughly 2.2 percent of Federal Savings Bank’s overall assets, and nearly 11 percent of the bank’s total shareholder equity. The total borrowing cost appears to exceed the equivalent market value of a property of that size in the neighborhood, and it’s also unusual from a risk management standpoint to loan millions of dollars for a home already in default by the same owner.

Adding to the intrigue is the identity of Federal Savings Bank’s founder, CEO, and chairman: Steve Calk, a Trump campaign supporter and member of the president’s Economic Advisory Council. Neither Federal Savings Bank nor Calk has responded to a request for comment. Through a spokesperson, Genesis Capital stated that they “do not release information to third parties about the status of our loans.”

MC Brooklyn Holdings bought the 377 Union building for $2.9 million in late 2012, according to local Brooklyn blog Pardon Me for Asking. In 2013, the New York Department of Buildings approved a permit to turn the two-unit brownstone into a single-family home. That application lists the owner as Paul Manafort. But the home has been empty since the purchase.

Though work initially started, none has been performed in the last year and a half; cinderblocks and steel beams line the front yard. A stop-work order on the project is dated February 1, after Manafort secured the new loan. Neighbors have complained about Manafort’s “eyesore” of a project. Manafort told the New York Post that he hired a new architect and plans to complete the conversion by the end of this year.

Regardless, the $6.6 million the Manaforts have borrowed on the house is well more than it is worth. Add this to the outstanding indebtedness on the Trump Tower and Howard Street properties and Manafort has $12.33 million in home equity loans outstanding, less any principal payments made since they were issued.

Manafort did not respond to repeated requests for comment.

Russo and Termine wonder if the transactions resulted in available cash for Manafort and his family, with successive loans paying off prior ones.

“You’ve got lots of LLCs, lots of properties, lots of transfers to Manafort, his wife, and his kids,” said Termine. “It didn’t smell good, and then added together, it really doesn’t.”

As it happens, Manafort’s son-in-law and occasional business partner, Jeffrey Yohai, was recently sued in federal court for taking money from a real estate partnership for personal use. Celebrity photographer Guy Aroch accused Yohai of selling him stakes in a real estate partnership over a two-year period but then using “most or all of the funds for personal travel; lavish purchases; and/or speculative ventures outside the investment mandates,” according to the lawsuit. Aroch further alleges that Yohai uses his relationship with Manafort to meet wealthy people and sell them on investing in his real estate business.

“Typically, Yohai promises his investors a quick and large return on their investments. When this promised financial performance fails to materialize and investors express their concern, Yohai simply recruits new investors to newly established LLCs — with the same claims of quick success — and repays his earlier investors with these incoming funds,” the lawsuit states.

Yohai recently declared bankruptcy on LLCs tied to four properties in California, all of which are in some stage of foreclosure. Manafort was tied to at least one of those properties as a creditor. Yohai’s lawyer, Marc Forsythe, did not respond to a request for comment.

Manafort has also been accused of misusing investor funds. In 2008, a Russian aluminum magnate named Oleg Deripaska sued Manafort in a Cayman Islands court for taking $19 million for investments and failing to explain how the money was used. For at least part of that legal dispute, Manafort could not be found.

A longtime Republican strategist, Manafort’s removal from the Trump campaign last summer came amid reports that a pro-Russian political party in Ukraine gave him $12.7 million in off-the-books payments. He has re-emerged in the news because of leaked intelligence reports suggesting his ongoing contacts with Russian government officials during the Trump campaign. Manafort has denied all of these allegations.

During the time Manafort worked for the Ukrainian government, from 2007 to 2012, he purchased four homes worth $11 million, according to public records acquired by Fusion. This includes the Trump Tower condo and the 27 Howard Street loft. He also owns a 5,600 square foot mansion in the Hamptons, a luxury condo in Alexandria, Virginia, a residence in Palm Beach Gardens, Florida, and two 5-acre horse farms in Florida and Virginia.

It’s unclear whether these are for family use or investment properties. They are typically routed through shell companies and LLCs, consistent with Manafort’s history of murky financial dealmaking with foreign billionaires, often involving real estate, the business of his father.

On Thursday, Politico reported that Manafort was the victim of a blackmail attempt. A note attached to a text from a Ukrainian politician to Manafort’s daughter (and Jeffrey Yohai’s wife) references “bulletproof facts” regarding Manafort’s financial relationship with former Ukrainian President Viktor Yanukovich, who was favored by Russia.

“Considering all the facts and evidence that are in my possession, and before possible decision whether to pass this to [the National Anti-Corruption Bureau of Ukraine] or FBI I would like to get your opinion on this and maybe your way to work things out that will persuade me to do otherwise,” the note reads.

Manafort confirmed the authenticity of the text to Politico but said he never responded “directly” to them. The text came in days before the revelation of the $12.7 million Ukrainian payment.