After ICE Stakes Out a Church Homeless Shelter, Charities Worry Immigrants Will Fear Getting Help

Two dozen homeless men and women filed out of Rising Hope United Methodist Church, where they had found sanctuary the night before from the wind and brutal cold.

Each winter for more than 15 years, the church has acted as an overnight homeless shelter along the decaying Route 1 corridor in Alexandria, Virginia. Volunteers serve the visitors a hot meal and unroll sleeping bags for them on the church floor. The visitors have to leave the next morning by 7, when the church starts its daytime operations.

That morning in early February, as the men and women gathered in the church parking lot, a few of them noticed three unmarked cars parked across the street. Then a group of seven or eight Latino men split off from the group and headed for the shopping center across the street.

As soon as the men stepped onto the opposite sidewalk, a dozen federal agents burst out of the cars, forced them up against a wall, handcuffed them, and interrogated them for at least half an hour.

Multiple witnesses described the events to The Intercept. “They just jumped out,” said Ralph, one of the men who had spent the night in the church. “Then [the men] were lined up on the wall.” A sign is displayed on a brick wall on Feb. 26, where ICE allegedly waited before detaining men as they left a shelter at Rising Hope Mission Church in Alexandria, Va., during a Feb. 8 raid.

Oscar Ramirez, one of the men who was interrogated, was released after he convinced agents he had a green card. He told the community newspaper that the agents used portable fingerprint scanners on his hands, then let him go.

Witnesses said the other six or seven Latino men were taken away and shoved into in a van, already half full with other arrestees.

A spokesperson for Immigration and Customs Enforcement told The Intercept that the ICE agents had “conducted consensual interviews” and “identified two criminal aliens.” She refused to say how many people were arrested, or explain why agents were waiting across the street from a church.

But to the longtime pastor of Rising Hope, the message was chilling: His church is now a target. 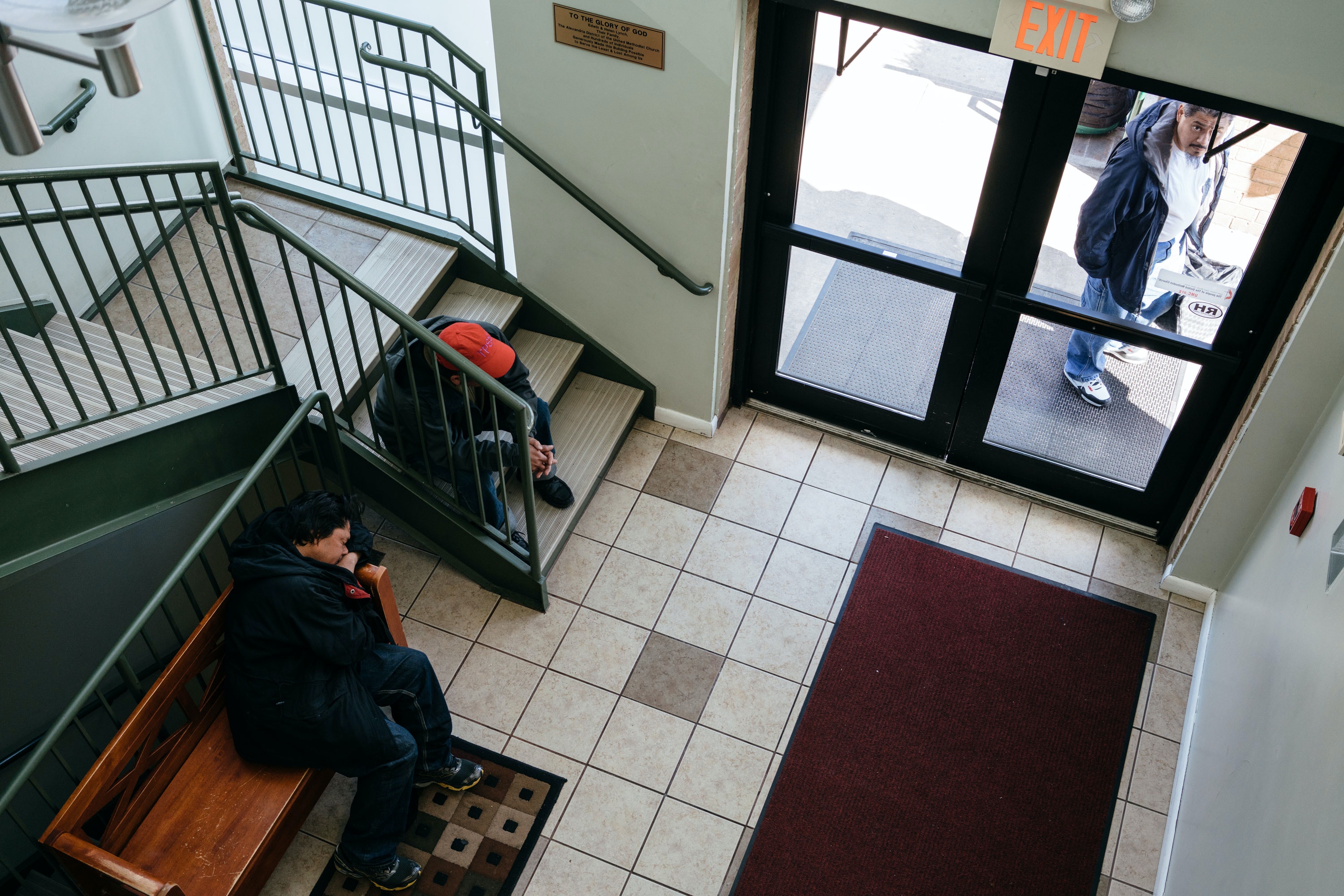 “I don’t know their names. I don’t know where they’re being held. I don’t even know how many there are,” immigration attorney Nick Marritz told me. “That does make it very hard for us to put a case together.”

Marritz works for the Legal Aid Justice Center, which serves low-income communities in Northern Virginia. Two weeks after the church stakeout, Marritz was still working with witnesses to figure out who was taken and where they are — information he needs to legally challenge the arrests.

To members of the church community, the men have effectively been disappeared, and ICE officials are still refusing to provide them with any answers.

ICE maintains a public database online that allows anyone to search detainees by name, date of birth, and an alien — or “A” — number. But the database is often crippled by processing delays and clerical errors and is useless to searchers who don’t know exactly who they are looking for.

It can also be difficult for homeless and low-income people to contact someone on the outside. “In the case of people who are experiencing homelessness like this, it’s hard for us to say how big the support network is,” said Marritz. “Who do they know to contact? Whoever might know about [them], they haven’t let me know.”

Marritz, Kincannon, and other United Methodist Church leaders walked into ICE’s regional office in Fairfax on February 17 and demanded the names and whereabouts of the people arrested. “We went to have a vigil and to try with talk with them to find who did they ask, who did they take, what were their charges. Not only would they not meet with us, they wouldn’t tell us the names of anybody,” said Kincannon.

It is not uncommon for homeless and low-income immigrants to virtually disappear into the U.S. immigration detention system. Prisoners are frequently shuffled around between more than 200 detention facilities. Most of them are held in prisons run by private companies.

Lawyers and families members often face obstacles in reaching detainees. Audits by the Government Accountability Office have found that officers in immigration prisons frequently deny detainees phone calls, or prevent them from making phone calls during business hours. Some detainees have reported that prison phones drop calls before they can leave voicemails. In many Customs and Border Protection facilities, prisoners have to purchase calling cards to use the phone — which puts a call beyond the financial means of many.

A week after the arrests, Virginia Gov. Terry McAuliffe and Sen. Tim Kaine, D-Va., both sent letters to ICE inquiring about the raid and their enforcement policies near churches. ICE has not publicly responded to either one. Rising Hope was chartered in 1996 as a mission church to serve homeless people, and to this day between 70 and 80 percent of its congregation is homeless. It occupies a modest, two-story building right off the Route 1 corridor, an impoverished area just south of a wealthy D.C.-area suburb. There’s a tattoo parlor around the corner, and a Goodwill and payday loan agency a few blocks away.

According to Rev. Jeff Mickle, the Alexandria district superintendent for the United Methodist Church, ICE hasn’t targeted any other churches in his district. There are 54 — all far more affluent than Rising Hope.

Kincannon founded Rising Hope out of his car more than 20 years ago, and since then the church has grown into one of Northern Virginia’s most effective charities. Last year, the church’s pantry gave out $1.2 million worth of food, and its soup kitchen served 16,000 hot meals. Its winter shelter program opens every night from December to March.

“Think about it: They’re coming here to keep from freezing to death. They’re coming here to find support and help. By sweeping them up after they left here, [ICE is] putting fear into other people. There may be folks now that may be afraid to come in out of the cold,” Kincannon told me in his office. “It’s real cruelty.”

Parishioners at Rising Hope are afraid the church will be targeted again. Bulletin boards advertised free “know your rights” trainings in English and Spanish. Volunteers have noticed a marked decrease in the number of Latino men and women coming to the winter shelter.

During a Sunday sermon 11 days after the raid, Kincannon told the congregation about a Latino woman and U.S. citizen who frequents the church food pantry. “She is so frightened she will be picked up and deported before she can prove her citizenship,” he said, “she has started carrying her birth certificate with her.” 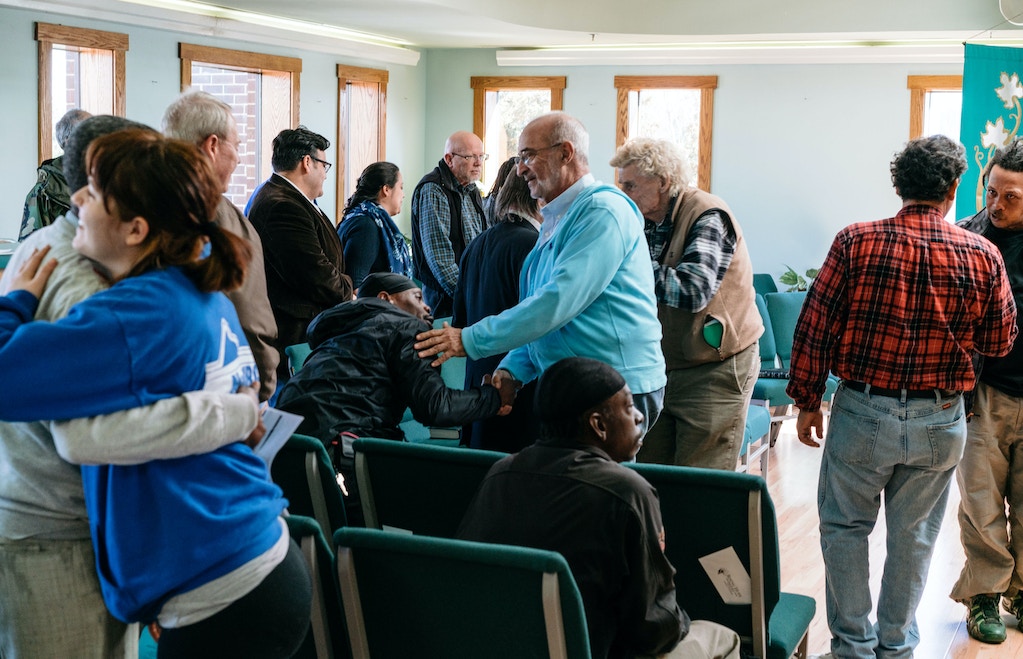 Members of Rising Hope Mission Church in Alexandria, Va., wish peace upon one another on Feb. 26.

In 2011, ICE adopted a “sensitive locations” policy meant to prevent agents from terrorizing important community sites. It prevents ICE agents from making arrests “focused on” schools, churches, or hospitals without an emergency or prior approval from a high-level department official.

ICE released a statement following the Rising Hope arrests saying it complied with the policy. “The Department of Homeland Security is committed to ensuring that people seeking to … utilize services provided at any sensitive location are free to do so without fear or hesitation,” it read.

But the raid not only impacted the church’s mission, it sent shockwaves throughout the area. After Mickle sent a letter notifying local clergy about the raid, many have reported back about seeing fear in their own communities. “I have already received phone calls from people who are very upset about the situation,” said Rev. Ileana Rosario, a United Methodist pastor who works with Hispanic and immigrant communities. “We have no guarantees that this will not happen again.”

Rosario founded a predominantly Hispanic church in Arlington in 2001, and later that year, President Bush invited her to the White House and recognized her for her ministry. In 2007, she became the United Methodists’ director of Hispanic and Latino ministries for Virginia.

“What is so troubling for them is that it can happen at any time and at any moment,” said Rosario. “Church for them was the sanctuary. It was the safe place. For them, in their culture, church is the place that no one can touch. Where are we going to go if we cannot go to the House of the Lord?” 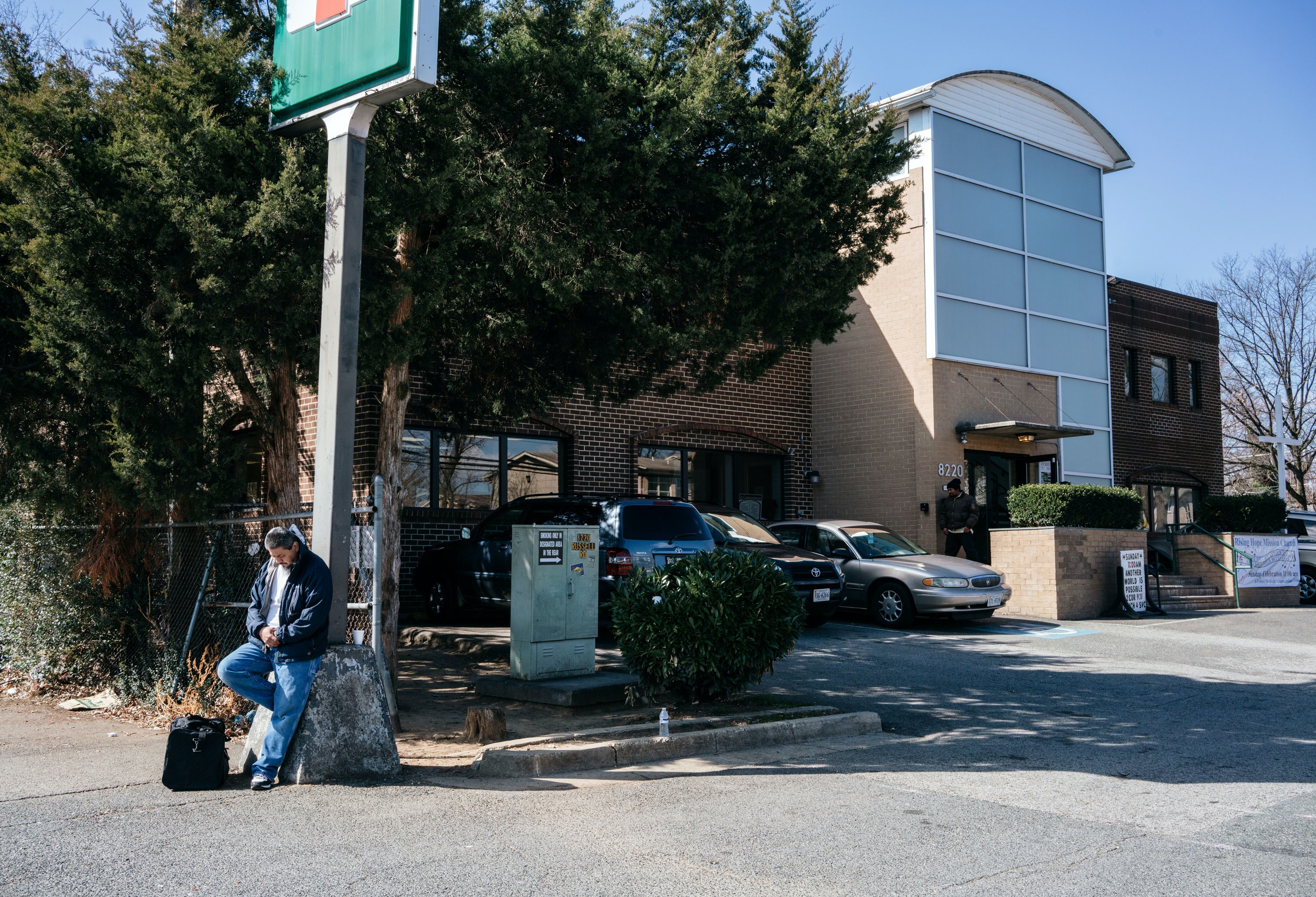 Francisco Alvarado waits for the soup kitchen at Rising Hope Mission Church. Alvarado, who was born in the U.S., says he has been stopped by police officers and asked to show his papers despite being a citizen.

Churches are playing a big role in resisting emboldened immigration enforcement across the country. Church leaders have trained volunteers, led demonstrations, and even offered sanctuary to people with outstanding deportation orders. Their resolve could signal a coming showdown with a president who already has the tools to dramatically accelerate deportations.

Trump inherited a deportation machine of enormous power: President Obama pumped billions of additional dollars into immigration enforcement and deported more people than any of his predecessors. During the final months of Obama’s presidency, administration lawyers argued before the Supreme Court that the federal agents should be able to imprison immigrants for years on end without a bond hearing.

In his first weeks in office, Trump has begun to unleash the full force of that deportation system. The Department of Homeland Security released memos on February 18 that outline Trump’s vision: They call for hiring thousands of agents, building new detention facilities, deputizing state and local law enforcement, and expanding the categories of people who are “priorities for removal” to possibly include millions of immigrants.

While ICE’s “sensitive locations” policy on targeting churches technically remains in place, it could be modified or revoked. In his letter to district clergy, Mickle asked them to “keep this matter in your prayers” and “be prepared to stand up when the time comes.”

Paraphrasing the remarks of a United Methodist theologian, Mickle wrote: “If the choice is between honoring a president’s campaign promise, or honoring the commands of Jesus, the Church has no choice but to follow Jesus, even if it leads us to stand up against the actions of the government.”

“They’re not coming in unless they have a warrant,” Kincannon said. “If they try and come in without a warrant, I’ll stand in the way.”

Top photo: Members of Rising Hope Mission Church in Alexandria, Va., pray for their pastor, Keary Kincannon, during Sunday service on Feb. 26. Kincannon will be present during President Trump’s next address to the session of Congress as a guest of Virginia Sen. Mark Warner.