Listen to the world premiere of “Fake News,” by Narcy, from The Intercepted podcast. The Iraqi-Canadian hip-hop artist Yassin Alsalman, aka Narcy, first made a name for himself in 2003 when the U.S. invaded his family’s home country of Iraq. He was the frontman of The Euphrates, and quickly became a prominent voice for the young Arab diaspora in North America just as the “war on terror” — the torture at Abu Ghraib and CIA black sites, the shipping of prisoners to Guantanamo Bay — was kicking into high gear. His subsequent solo albums and collaborations have conveyed the realities of civilians on the ground in U.S. war zones, highlighting victims of drone strikes and challenging the dominant narratives emanating from Washington justifying its global war. Alsalman is also a university lecturer and an author. His lyrics merge news, history, and political analysis with the evolving sounds and concepts coming out of the hip-hop community in the U.S. and beyond.

“We, as a generation of hyphenated Arabs, have had a particular experience of being governed,” Narcy said. “When looking back to our motherlands, we never had true leaders — just pawns and dictators. Same can be said about North America. That’s why I believe we have to put out art that matters, we are the only ones speaking for ourselves. We aren’t afraid anymore.”
Last year, Narcy collaborated with Yasiin Bey on a highly acclaimed track for the indigenous hip-hop group A Tribe Called Red’s album and its powerful accompanying music video. Earlier this month, Narcy released a music video, “FREE,” addressing the refugee crisis in the Middle East by showing the humanity and living conditions of refugees. The aim of the track is to raise money for refugee families. Narcy’s latest album is 2015’s “World War Free Now.” 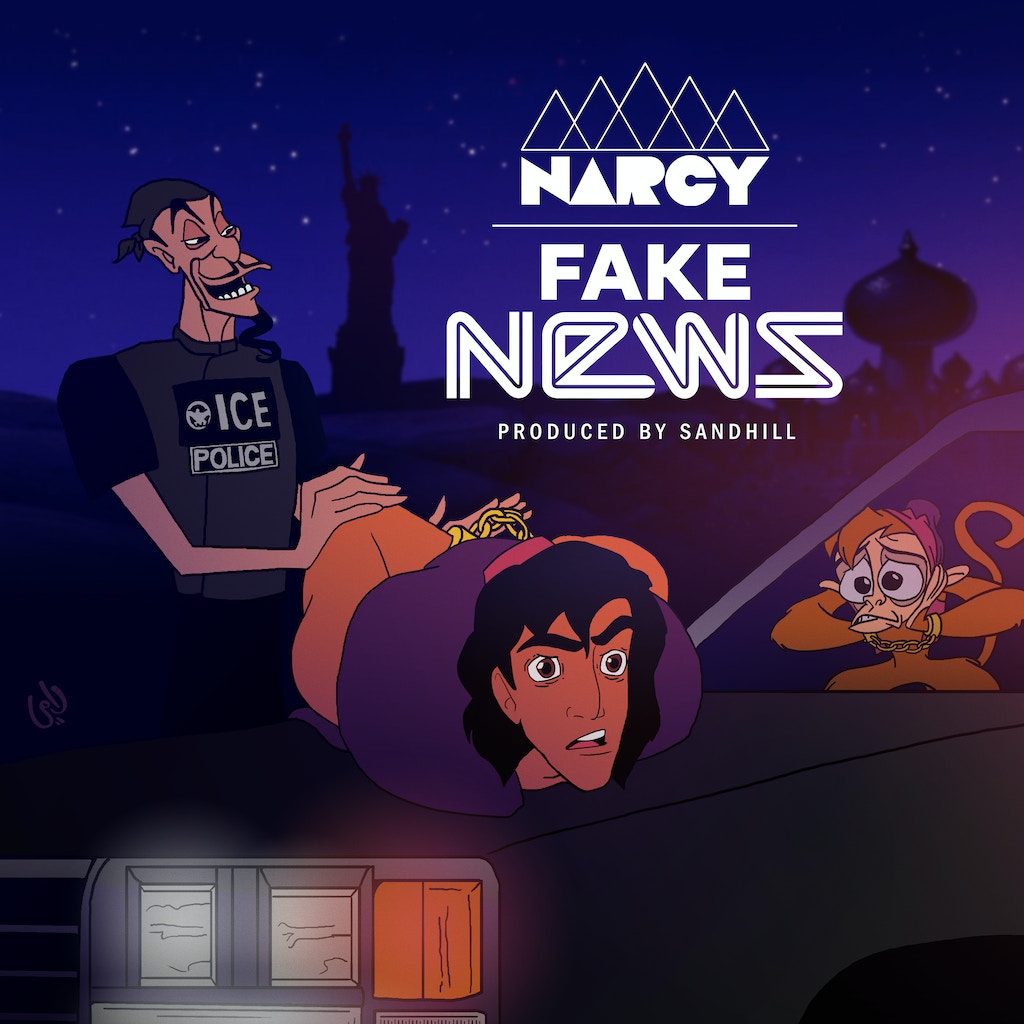 Today, in an exclusive for Intercepted, Narcy is releasing his new song, “Fake News.” In a departure from Narcy’s traditional style, the song is performed in auto-tune. “I felt this urge to get a lot of stuff off my chest based on what was going around and all the rhetoric that was going on about: immigrants, refugees, Muslims, brown people in general, black people — and I figured the best way to tell it was in auto-tune,” Narcy told Intercepted. “You have to find ways to be direct about what people should be paying attention to without force-feeding them anything. So, I wanted to write something that was sorta catchy but also, in a way, tongue-in-cheek about the way politics is being presented as a TV show. That everything is almost on hyper-drive, everything is on steroids right now, like it’s all just a show. And we’re not thinking about the long-term impact of this thing — of the new rise of xenophobia all over the world.”

Even if you are not a hip-hop fan, you should listen to the track just to hear Narcy name check Donald Trump’s senior adviser Steve Bannon in auto-tune. “It’s like Muslim bannin’, its just Bannon is in the name,” he said. Narcy recalled being in the studio recording the track and ended up free styling in the booth: “‘Muslim they bannin’, they bannin’, they bannin’, so who do you look at? Holler at Steven K Bannon.’ You know that’s who wrote [the executive order on immigration], so it’s just it’s the truth I’m just saying what the reality is.”

Narcy’s interview and his new song, “Fake News,” can be heard on the latest episode of the Intercepted podcast:

My baba called me said he really worried
Of what I might say, I told him I’m not in a hurry.
Hung the phone up, got on Twitter, saw the shooting,
Wasn’t ready for it …
Last 20 years feeling really blurry.
All day:
Information overload
Refugees on them boats.
Can’t you see them social codes
How can we be rich in culture, when everybody go for broke?
If money makes the world turn, someone please burn the doe!!!
I don’t trust my phone or television
What is this hell I’m living?
It rings a bell I’m biven …
Devo-tion for my culture,
No hope in politicians,
Quebec is cold baby, can’t feel my soul lately …
I love it, I love it, I’m loving it still.
Pay your taxes numbers don’t lie,
But the government will.
The way you make me feel it turns me off like Michael Jackson.
No black or white,
No Sunni or Shi’ite,
We gon’ be aight.

If you Muslim,
They bannin’, they bannin’, they bannin’, they bannin’, they bannin’,
Holla at Stephen K. Bannon, remember that name, K. Bannon, K. Bannon
How come the last president out in St. Vincent Copa Cabannin,
Whole brown world image on that cobra commander
All I hear is Aladdin Aladdin Aladdin bin Laden Aladdin
Rub the lamp, stir the pot, and the world is lost,
Then the magic will happen.
The enemy is here — that’s what they all say.
I take it with a grain of salt bae.
Man, everything done changez.
I’m disappointed in Kanye (then call me bro)
Too Canadian or nah, eh?
Floride in my lattes
Soy almond yoga grande
Like Ariana, I’m sorry mama, been on Instagram the whole day
Fake news, so vague, always, short taste, phase 2 (phase 2)
Alt-right might punch a Nazi,
But that’s a court case, well, alriiiiggghhttt
We’re getting trapped anyway …

“Fake News” is available on Narcy’s SoundCloud page. His album “World War Free Now” is on all platforms, including iTunes, Spotify, and Google Play.