Defense Secretary James Mattis may not be a bigot or a crank like so many other top Trump appointees, but he could prove to be far more lethal in the long run.

Did you know that the Trump administration almost went to war with Iran at the start of February?

Perhaps you were distracted by Gen. Michael Flynn’s resignation as national security adviser or by President Trump’s online jihad against Nordstrom. Or maybe you missed the story because the New York Times bizarrely buried it in the midst of a long piece on the turmoil and chaos inside the National Security Council. Defense Secretary James Mattis, according to the paper, had wanted the U.S. Navy to “intercept and board an Iranian ship to look for contraband weapons possibly headed to Houthi fighters in Yemen. … But the ship was in international waters in the Arabian Sea, according to two officials. Mr. Mattis ultimately decided to set the operation aside, at least for now. White House officials said that was because news of the impending operation leaked.”

Get that? It was only thanks to what Mattis’s commander in chief has called “illegal leaks” that the operation was (at least temporarily) set aside and military action between the United States and Iran was averted.

Am I exaggerating? Ask the Iranians. “Boarding an Iranian ship is a shortcut” to confrontation, says Seyyed Hossein Mousavian, former member of Iran’s National Security Council and a close ally of Iranian President Hassan Rouhani. Even if a firefight in international waters were avoided, the Islamic Republic, Mousavian tells me, “would retaliate” and has “many other options for retaliation.”

Trita Parsi, head of the National Iranian American Council and author of the forthcoming book “Losing an Enemy — Obama, Iran and the Triumph of Diplomacy,” agrees. Such acts of “escalation” by the Trump administration, he tells me, “significantly increases the risk of war.” 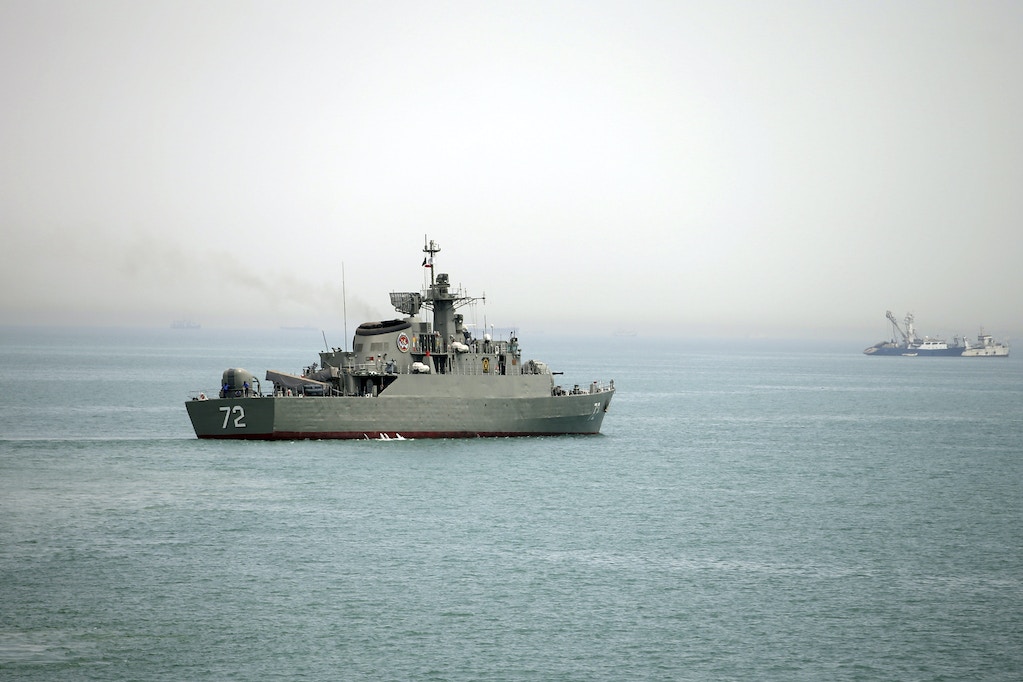 A photo released by the semi-official Fars News Agency shows an Iranian warship before it leaves Iran’s waters at the Strait of Hormuz on April 7, 2015.

In an administration overflowing with Iran hawks, from CIA Director Mike Pompeo (“I look forward to rolling back this disastrous deal with the world’s largest state sponsor of terrorism”) to Homeland Security Secretary John Kelly (“Iran’s involvement in [Latin America] … is a matter for concern”) to former National Security Adviser Flynn (“We are officially putting Iran on notice”), some may have naively expected Mattis to be the responsible adult in the room.

The defense secretary has been lauded by politicians and pundits alike: the “scholar-warrior” (New York Daily News) and “most revered Marine in a generation” (Marine Corps Times) with “the potential to act as a restraint” (New York Times) on an impulsive commander in chief as he is “the anti-Trump” (Politico) and therefore “good news for global order” (Wall Street Journal).

So why would a retired Marine Corps general such as Mattis be willing to provoke a conflict with Tehran over a single ship? The fact is that Mattis, too, is obsessed with Iran. He has hyperbolically called the Islamic Republic “the single most enduring threat to stability and peace in the Middle East” and — in a Trump-esque descent into the world of conspiracy theories — suggested Tehran is working with ISIS. “Iran is not an enemy of ISIS,” Mattis declaimed in 2016, because “the one country in the Middle East that has not been attacked” by ISIS “is Iran. That is more than happenstance, I’m sure.”

According to the Washington Post, in the run-up to the talks over Iran’s nuclear program, “Israelis may have questioned Obama’s willingness to use force against Iran. … But they believed Mattis was serious.” The general, in his capacity as head of U.S. Central Command, even proposed launching “dead of night” airstrikes on Iranian soil in 2011, in retaliation for Tehran’s support for anti-American militias in Iraq — a proposal rejected by White House officials who were worried that it “risked starting yet another war in the Middle East.”

Mousavian is puzzled by the defense secretary’s hawkishness: “He is one of the most experienced U.S. generals and he knows … the consequences of confrontation with Iran would be tenfold what the U.S. experienced in Afghanistan and Iraq combined.”

Mattis has, in fact, been tied to some of the worst war crimes of the Iraq invasion. It was he who gave the order to attack the village of Mukaradeeb in April 2004 — a decision he would later admit took him only 30 seconds to approve — which killed 42 civilians, including 13 children, who were attending a wedding there. “I don’t have to apologize for the conduct of my men,” he told reporters.

Six months later, in November 2004, it was Mattis who planned the Marine assault on Fallujah that reduced that city to rubble, forced 200,000 residents from their homes, and resulted, according to the Red Cross, in at least 800 civilian deaths. 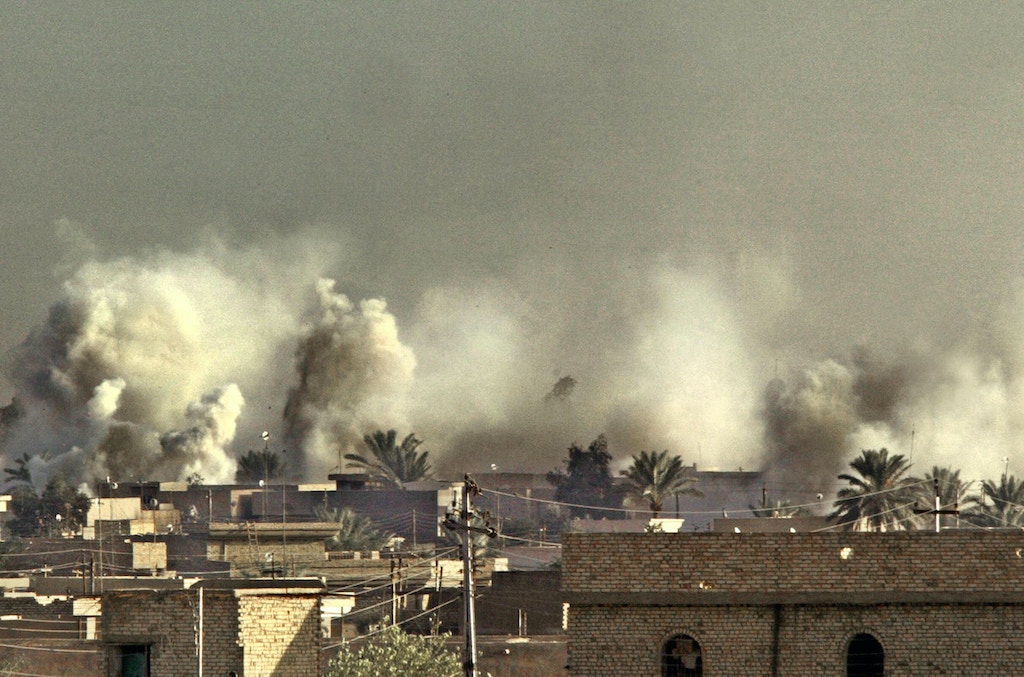 There’s a reason Mattis is nicknamed “Mad Dog.” There’s a reason his militant maxims — or “Mattisisms” — include telling Marines under his command in Iraq to “be polite, be professional, but have a plan to kill everybody you meet,” and telling an audience in California: “It’s fun to shoot some people. … I like brawling.”

Is this the kind of “restraint” that we can expect from Mattis? Trump was rightly lambasted over his January raid in Yemen that led to the deaths of a U.S. Navy SEAL and at least 15 Yemeni women and children, but it was the defense secretary, joined by the chairman of the Joint Chiefs of Staff, who persuaded the neophyte president that the SEALs’ attack on al Qaeda in the Arabian Peninsula would be a “game changer.” It was the gung-ho Mattis who, according to Reuters, told Trump that he “doubted that the Obama administration would have been bold enough to try it.” And this week, we learned, it is Mattis to whom Trump wants to give free rein to launch raids, drone strikes, and hostage rescues without prior presidential approval. What could possibly go wrong?

According to Parsi, Mattis “believes the U.S. needs to have a strong hegemonic position in the Middle East,” and “if your aim is hegemony in the Middle East, Iran will be your No. 1 foe due to Tehran’s rejection of Pax Americana — even though the U.S. and Iran share a lot of common interests, such as opposition to ISIS.”

Yet even normally skeptical voices have bought into the myth of Mattis’s moderation. “I actually do think he is the closest thing we have to a ‘moderate’ in this administration,” Andrew Bacevich, a conservative military historian at Boston University and long-standing critic of U.S. defense policy, tells me. This, to misapply a line from George W. Bush, is “the soft bigotry of low expectations.” The defense secretary may not be a bigot or a crank like so many other top Trump appointees, but he could prove to be far more lethal in the long run.

Remember: It was not Dick Cheney or Donald Rumsfeld but “moderate” Secretary of State Colin Powell — another retired general — who was tasked with selling President Bush’s Mesopotamian misadventure to the United Nations in February 2003. Who do you imagine would make a more convincing public case, on behalf of the Trump administration, for a future shooting war with Iran? The draft-dodging president or his decorated defense secretary? Ex-Breitbart boss Steve Bannon or “Warrior Monk” Mattis, who, lest we forget, 45 out of 46 Senate Democrats voted to confirm?

“War is once again on the agenda, whether by design or by accident,” warns Parsi. So don’t be fooled. Mattis is far from a sheep in hawk’s clothing; he is a hawk in hawk’s clothing. The defense secretary may once have described the three biggest threats to U.S. national security as “Iran, Iran, Iran,” but if the Trump administration ends up going to war with Iran as a result of the defense secretary’s recklessness, the three biggest threats to “stability and peace in the Middle East” may turn out to be “Mattis, Mattis, Mattis.”