The new Dem/neocon alliance is not one of political convenience but rather shared convictions.

One of the most bizarre aspects of the all-consuming Russia frenzy is the Democrats’ fixation on changes to the RNC platform concerning U.S. arming of Ukraine. The controversy began in July when the Washington Post reported that “the Trump campaign worked behind the scenes last week to make sure the new Republican platform won’t call for giving weapons to Ukraine to fight Russian and rebel forces.”

Ever since then, Democrats have used this language change as evidence that Trump and his key advisers have sinister connections to Russians and corruptly do their bidding at the expense of American interests. Democratic Senator Ben Cardin, the ranking member of the Senate Foreign Relations Committee, spoke for many in his party when he lambasted the RNC change in a July letter to the New York Times, castigating it as “dangerous thinking” that shows Trump is controlled, or at least manipulated, by the Kremlin. Democrats resurrected this line of attack this weekend when Trump advisers acknowledged that campaign officials were behind the platform change.

This attempt to equate Trump’s opposition to arming Ukraine with some sort of treasonous allegiance to Putin masks a rather critical fact: namely, that the refusal to arm Ukraine with lethal weapons was one of Barack Obama’s most steadfastly held policies. The original Post article that reported the RNC platform change noted this explicitly:

Of course, Trump is not the only politician to oppose sending lethal weapons to Ukraine. President Obama decided not to authorize it, despite recommendations to do so from his top Europe officials in the State Department and the military.

Early media reports about this controversy from outlets such as NPR also noted the irony at the heart of this debate: namely, that arming Ukraine was the long-time desire of hawks in the GOP such as John McCain, Lindsey Graham and Marco Rubio, but the Obama White House categorically resisted those pressures:

Republicans in Congress have approved providing arms to the Ukrainian government but the White House has resisted, saying that it would only encourage more bloodshed.

It’s a rare Obama administration policy that the Trump campaign seems to agree with.

Indeed, the GOP ultimately joined with the hawkish wing of the Democratic Party to demand that Obama provide Ukraine with lethal weapons to fight Russia, but Obama steadfastly refused. As the New York Times reported in March, 2015, “President Obama is coming under increasing pressure from both parties and more officials inside his own government to send arms to the country. But he remains unconvinced that they would help.” When Obama kept refusing, leaders of the two parties threatened to enact legislation forcing Obama to arm Ukraine.

The general Russia approach that Democrats now routinely depict as treasonous – avoiding confrontation with and even accommodating Russian interests, not just in Ukraine but also in Syria – was one of the defining traits of Obama’s foreign policy. This fact shouldn’t be overstated: Obama engaged in provocative acts such as moves to further expand NATO, non-lethal aid to Ukraine, and deploying “missile defense” weaponry in Romania. But he rejected most calls to confront Russia. That is one of the primary reasons the “foreign policy elite” – which, recall, Obama came into office denouncing and vowing to repudiate – was so dissatisfied with his presidency.

A new, long article by Politico foreign affairs correspondent Susan Glasser – on the war being waged against Trump by Washington’s “foreign policy elite” – makes this point very potently. Say what you will about Politico, but one thing they are very adept at doing is giving voice to cowardly Washington insiders by accommodating their cowardice and thus routinely granting them anonymity to express themselves. As journalistically dubious as it is to shield the world’s most powerful people with anonymity, this practice sometimes ends up revealing what careerist denizens of Washington power really think but are too scared to say. Glasser’s article, which largely consists of conveying the views of anonymous high-level Obama officials, contains this remarkable passage: 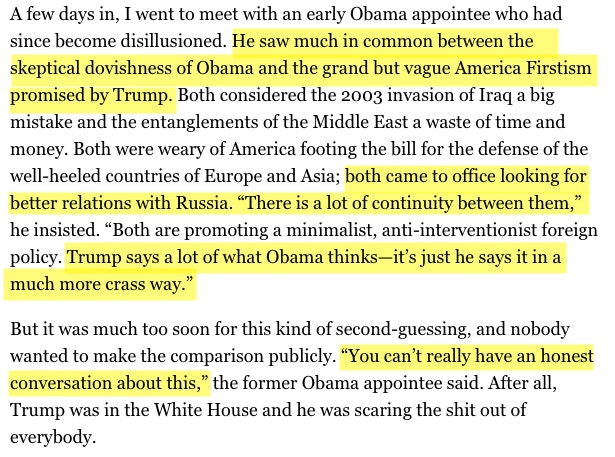 In other words, Democrats are now waging war on, and are depicting as treasonous, one of Barack Obama’s central and most steadfastly held foreign policy positions, one that he clung to despite attacks from leading members of both parties as well as the DC National Security Community. That’s not Noam Chomsky drawing that comparison; it’s an Obama appointee.

The destructive bipartisan Foreign Policy Community was furious with Obama for not confronting Russia more, and is now furious with Trump for the same reason (though they certainly loath and fear Trump for other reasons, including the threat they believe he poses to U.S. imperial management through a combination of ineptitude, instability, toxic PR, naked rather than prettified savagery, and ideology; Glasser writes: “‘Everything I’ve worked for for two decades is being destroyed,’ a senior Republican told me”).

All of this demonstrates how fundamental a shift has taken place as a result of the Democrats’ election-related fixation on The Grave Russian Threat. To see how severe the shift is, just look at this new polling data from CNN this morning that shows Republicans and Democrats doing a complete reversal on Russia in the span of eight months:

The Democrats’ obsession with Russia has not just led them to want investigations into allegations of hacking and (thus far evidence-free) suspicions of Trump campaign collusion – investigations which everyone should want. It’s done far more than that: it’s turned them into increasingly maniacal and militaristic hawks – dangerous ones – when it comes to confronting the only nation with a larger nuclear stockpile than the U.S., an arsenal accompanied by a sense of fear, if not outright encirclement, from NATO expansion.

Put another way, establishment Democrats – with a largely political impetus but now as a matter of conviction – have completely abandoned Obama’s accommodationist approach to Russia and have fully embraced the belligerent, hawkish mentality of John McCain, Lindsey Graham, Bill Kristol, the CIA and Evan McMullin. It should thus come as no surprise that a bill proposed by supreme warmonger Lindsey Graham to bar Trump from removing sanctions against Russia has more Democratic co-sponsors than Republican ones.

This is why it’s so notable that Democrats, in the name of “resistance,” have aligned with neocons, CIA operatives and former Bush officials: not because coalitions should be avoided with the ideologically impure, but because it reveals much about the political and policy mindset they’ve adopted in the name of stopping Trump. They’re not “resisting” Trump from the left or with populist appeals – by, for instance, devoting themselves to protection of Wall Street and environmental regulations under attack, or supporting the revocation of jobs-killing free trade agreements, or demanding that Yemini civilians not be massacred.

Instead, they’re attacking him on the grounds of insufficient nationalism, militarism, and aggression: equating a desire to avoid confrontation with Moscow as a form of treason (just like they did when they were the leading Cold Warriors). This is why they’re finding such common cause with the nation’s most bloodthirsty militarists – not because it’s an alliance of convenience but rather one of shared convictions (indeed, long before Trump, neocons were planning a re-alignment with Democrats under a Clinton presidency). And the most ironic – and over-looked – aspect of this whole volatile spectacle is how much Democrats have to repudiate and demonize one of Obama’s core foreign policy legacies while pretending that they’re not doing that.