“History” Insists on Covering Up the Intellectual Production of Black Women, Even in the 21st Century

A pioneer of Brazilian psychoanalysis, Virgínia Leone Bicudo had her work — and even her blackness — challenged. 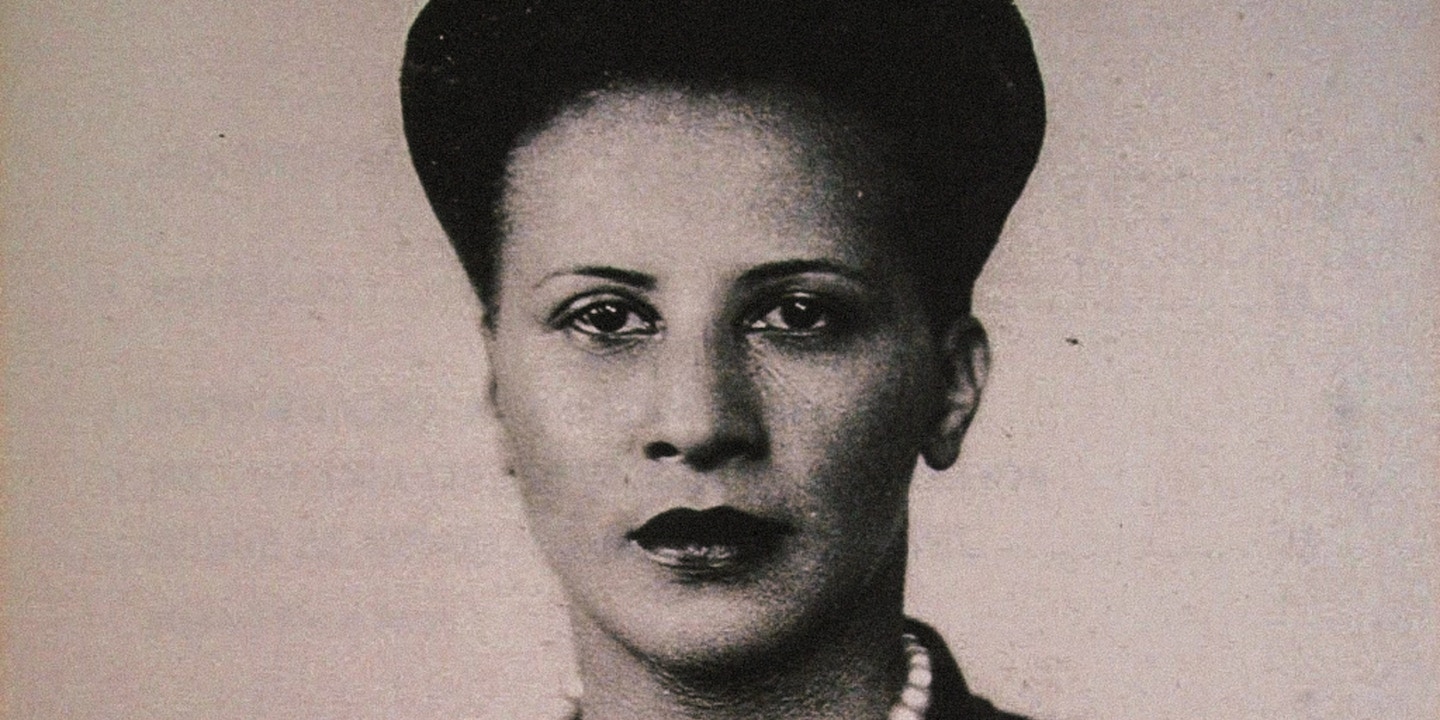 I no longer remember how I found Janaína Damaceno Gomes’s thesis, “The Secrets of Virgínia: A Study of Racial Attitudes in São Paulo (1945-1955).” Janaína is a professor at the Baixada Fluminense Teacher’s College in Rio de Janeiro, with a Ph.D. in social anthropology from the University of São Paulo and a master’s in education and bachelor’s in philosophy from Unicamp. Virgínia was a teacher, a health educator, a psychiatric attendant, a psychologist, a sociologist, and a psychoanalyst. She challenged not only the place of women in the first half of last century — especially black women — but also the prevailing thought on subjects like education and race relations. 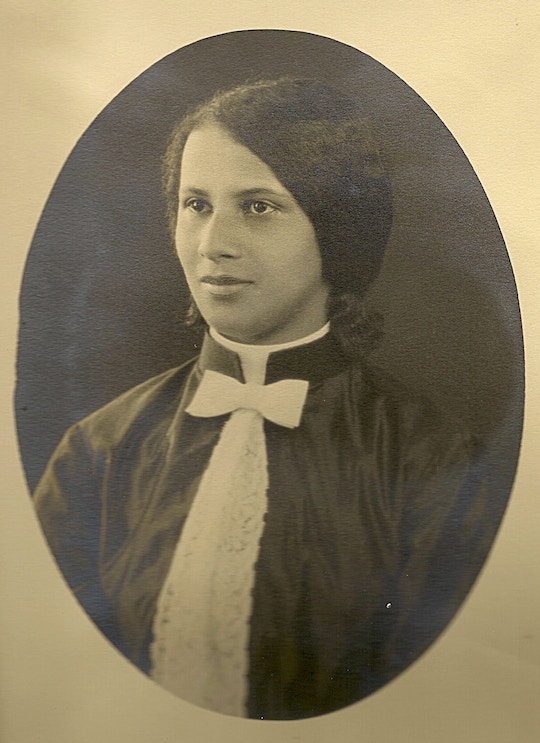 Portrait of Virgínia Leone Bicudo as a young woman.

Virgínia’s work was almost kept a secret, as Janaína tells us, “due to the looting of archives and mold literally growing on the author’s thesis, because of unpublished interviews, references that were not made, and texts that were left out of compendiums, [and] because of the choice of a bibliographic cannon that is perpetuated and rarely reviewed.” Any similarity to some current situations is no mere coincidence.

Virgínia Leone Bicudo was born in São Paulo in 1910, the daughter of Giovanna Leona, an Italian immigrant, and Theofilo Júlio Bicudo. Giovanna worked as a maid in the home of Col. Bento Bicudo, in Campinas, where she met the young Theofilo, born of the “free womb” of the slave Virgínia Julio. Taken under the colonel’s wing, Theofilo was very ambitious for a young black man. His dream was to study medicine at the Medical University of São Paulo, however he was denied entry by a professor who believed that the university was not a place for black people. The couple had six children and decided to invest in their education.

Virgínia liked to study and followed her parent’s advice to work very hard “to avoid being hurt and defeated by the expectation of rejection … due to skin color.” “Look, my father’s view was that a person’s value is derived from their education, their preparation, their studies. That was my father. So he put all of us in school,” she said in an interview with Marcos Maio in 1995. But soon she would see that this was not true, as she was chased by schoolmates yelling “blacky, blacky, blacky.”

In 1930, Virgínia Leone graduated from the Normal School, and in 1932, after completing a course in public health education, she started to work as a health educator and then as a psychiatric attendant, rising to the level of supervisor in the Infant Oriented Clinic in São Paulo. During this time, she often traveled around the city, learning about the lives of children who were treated as “problematic” by the “hygienization” campaigns and the eugenic ideas that dominated Brazilian public school policy at that time. Maybe she saw herself in them.

In 1936, she was the only woman to register for the political and social sciences track at the newly founded Free School of Sociology and Politics, which she graduated from in 1938. “I chose the school of sociology because I was suffering, I had pain and I wanted to know what was causing me so much suffering. And I understood that they were external conditions. So I thought that sociology would bring clarity to the causes of my suffering.”

During the program, Virgínia discovered new ideas that would take her career on a new course: “For the first time in my life, I heard about Freud, about sublimation and internal factors. So I said, well, it is not sociology that I need to study, what I need to study is psychoanalysis and Freud.”

Rather than having a “whitening” effect, social ascension creates consciousness of skin color.

Her interest in psychoanalysis would lead her to become the first women to see an analyst in Latin America, in 1937. It’s interesting to think that a black woman, seeking to understand the pain caused by racism, was the first person to lie on the divan of Dr. Adelheid Koch, a German Jewish woman who was invited to come to Brazil by the newly founded Brazilian Society of Psychoanalysis and who was also fleeing Nazism.

To continue her studies, Virgínia Leone Bicudo enrolled in the first class of social science post-graduates in Brazil. Under the guidance of Donald Pierson, in 1945, she became the first person to defend a thesis about race relations in Brazil: “A study of racial attitudes of blacks and mulattos in São Paulo.” In the same year, she was hired as a professor at the School of Hygiene and Public Health at the University of São Paulo. In 1949, she was invited to join a UNESCO research project about race relations, coordinated by Roger Bastide and Florestan Fernandes. Her work, which would be excluded from the final publication in 1957, was the only research to conclude that Brazil was not the racial democracy that everyone wished it were, going against the conclusions of her adviser, Donald Pierson. According to him, prejudice existed in Brazil, but it was based more on class than race.

By studying black and mixed people who had managed to ascend São Paulo’s social ladder, Virgínia concluded that rather than having a “whitening” effect, social ascension creates consciousness of skin color, because even with the financial conditions to frequent certain places, such as clubs and hotels, black people who could afford to enter were rejected due to the color of their skin.

As she deepened her studies in psychoanalysis, Virgínia Leone Bicudo became the first psychoanalyst in Brazil who was not a medical doctor and was quickly accused of being a charlatan. Indignant with the treatment she received, she left for London in 1955, where she made contact and studied with the most important analysts of her time, such as Melanie Klein, Ernest Jones, Winnicott, Bion, and Anna Freud. From London, in order to publicize psychoanalysis, Virgínia transmitted lectures to Brazil via the BBC.

When she returned to Brazil in 1959, she was sufficiently renowned to continue her clinical activities and attended to such São Paulo elites as the current senator Eduardo Suplicy. She was one of the founders of the Institute of Psychoanalysis of the Brasília Society of Psychoanalysis. She had one of Excelsior Radio’s most popular programs, “Our Mental World,” in which she commented on and acted out cases that were mailed in to her. She wrote a book and a column in the Folha da Manhã newspaper by the same name. Virgínia became wealthy as a psychoanalyst and was one of the first women to drive her own car on the roads of São Paulo in the 1950s. She acquired property around the city too. But, according to Janaína Damaceno, she died a black death, in 2003 at the age of 93: forgotten, mad, and abandoned in an institution for the mentally ill.

Virgínia’s thesis was only recovered and published in 2010, exactly 100 years after her birth. Virgínia was right about racism when she wrote the thesis and was silenced by colleagues who did not agree with her. Janaína Damaceno tells us that she found the thesis, the first about the issue of race in Brazil, damp and moldy in the archives of the Department of Sociology and Politics at the University of São Paulo.

This process of erasing the intellectual production of black women continues, as illustrated by a case that Janaína narrates in her thesis:

While undertaking my doctorate, I applied for a scholarship for a sandwich year from an American foundation. During my interview, one of the judges, a social scientist, questioned me on the veracity of my premise that Brazilians had been studying and practicing psychoanalysis in Brazil as early as the 1940s. He said that this was probably a crass error in my research, given that the Argentines had a tradition of psychoanalysis before we did, a tradition that was very obvious in the south of Brazil where he was from. He also contested the existence of Virginía Bicudo as a black woman, because he had worked with Florestan Fernandes and knew the subject well. I did not receive the scholarship.

Throughout time, this is exactly what we keep seeing: Our knowledge and work are contested by people who do not understand them. Racism and machismo work together to keep us in the position of mere objects of study. This, we learned, is exactly what the sociologist Luiz Aguiar Costa Pinto wanted after he was accused of distortion of facts and plagiarism by Abdias do Nascimento and Alberto Guerreiro Ramos. Author of the book “The Black Man in Rio de Janeiro,” Costa Pinto did not like being questioned by his “objects of study.” He considered the mere possibility a threat to the social sciences. As Elisa Larkin Nascimento notes in her book “The Sorcery of Color: Identity, Race and Gender in Brazil”:

Perhaps the most eloquent expression of the nature of his scientific approach and his relationship with the black movement is Costa Pinto’s own response, published in an important Rio de Janeiro daily: “I doubt that any biologist after studying, say, a microbe, has seen this microbe get offended and come out in public to write nonsense about the study in which it participated as laboratory material.”

To those who challenged and continue challenging the place of “laboratory material,” my sincere thanks. In honor of all the black women who fight for respect, space, and recognition, I offer a special gratitude to Madam Virgínia Leone Bicudo and Dr. Janaína Damaceno Gomes. They represent us!