Dutch Vote in Droves — But Not for Geert Wilders, Breitbart’s Candidate for Prime Minister

The Netherlands is not about to turn into an alt-right paradise where mosques are closed and Muslims are banned, thanks to 87 percent of Dutch voters. 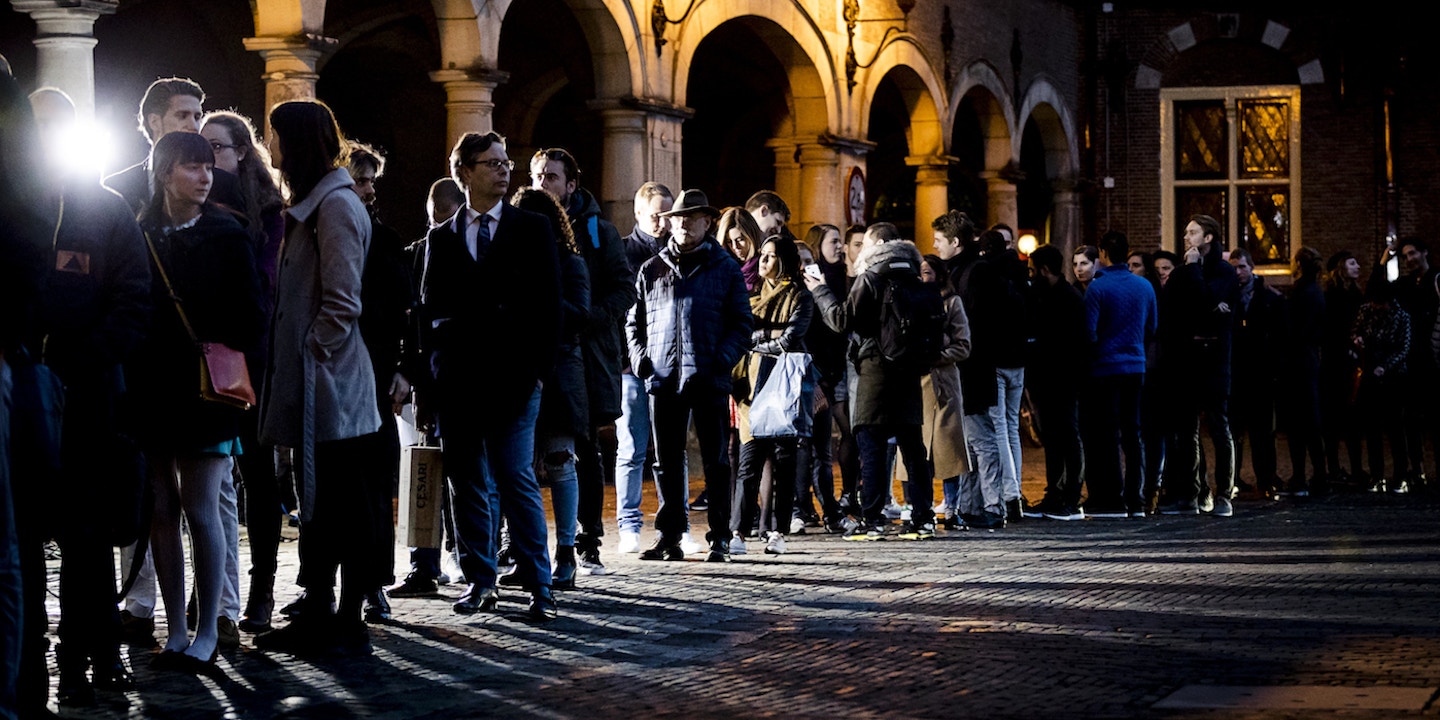 Votes are being counted by hand in the Netherlands, to assuage fears of tampering by Russian hackers, but exit polls and partial returns suggest an overwhelming rejection of Geert Wilders, whose anti-Muslim campaign rhetoric thrilled American racists but appealed to a narrow minority of Dutch voters in Wednesday’s parliamentary election.

With 93% of communities counted, it looks like PVV will come in second, but far behind VVD and well below recent polls and 2010 score. #TK17 pic.twitter.com/uBLDgwmtjK

Despite, or perhaps because of, political and financial support from Americans obsessed with the supposed threat from Muslim immigration — like Representative Steve King of Iowa and the Breitbart contributor David Horowitz — Wilders was on course to take just 13 percent of the vote, failing in his bid to deliver a third successive election-night shock for right-wing populism, following victories for Brexit and Donald Trump.

@geertwilderspvv Good luck at the polls today, my friend!! pic.twitter.com/aeOUfepJit Yes USA, you are still the only western democracy with a radical right political leader! ????

Although the Dutch system of proportional representation, combined with a splintering of support among more than a dozen parties, made it unthinkable for Wilders and his Party for Freedom, or PVV, to win an outright majority, opinion polls throughout 2016 had suggested that he was on course to lead the largest party in the next parliament. Had that come about, Wilders could have insisted on the right to try to form a coalition government, even if his noxious platform of banning Muslim immigration, closing mosques and withdrawal from the European Union repulsed most other parties.

As the votes were counted, however, Wilders and the PVV looked unlikely to win much more than the 13 percent of the vote projected in the exit polls — giving them at most 20 of the 150 seats in parliament — and the incumbent prime minister, Mark Rutte, declared victory on behalf of his People’s Party for Freedom and Democracy, or VVD.

Throughout election day, Rutte’s party ran radio ads reminding voters to head to the polls to avoid a local remake of Brexit or Trump.

Rutte's VVD running radio commercials all day to boost turnout. "Remember waking up the morning after Brexit, and Trump?" #DutchElection

Perhaps inspired by the sinking feeling so many in the Netherlands experienced the morning after those previous votes, turnout spiked to more than 80 percent, and polling places in multicultural, left-leaning Amsterdam had to be kept open late to accommodate the crowds.

Given the higher turnout, and a surge in support for Rutte after his feud with the Turkish government during the campaign’s final week, Wilders failed to even match the percentage of the vote his party took in 2010.

While the result was in line with predictions from experts of Dutch politics — some of whom scolded foreign journalists for having exaggerated the chance of an upset victory by Wilders — Rutte and the leader of the newly popular Green-Left Party, Jesse Klaver, both hailed the election as a sign that the Netherlands had repelled the threat of extreme nationalism.

"This is a night, after Brexit, when we said 'no' to the wrong kind of populism." - Rutte #DutchElection

As lengthy coalition talks commence in the Netherlands, and attention turns to other local subplots less covered in the foreign press — like the surge in support for the Green-Left, or GroenLinks party, which looked set to gain 11 seats, the collapse of Finance Minister Jeroen Dijsselbloem’s Labour Party, and the clear rejection of Wilders by young voters, who gave 97 percent of their votes to other parties — elections pitting far-right nationalists against the established order still loom in France and Germany.

A very disappointing result for my PvdA. But the vast majority of voters rejected the extreme populists. Which gives hope for the future.

For that reason, the repudiation of Wilders by about 87 percent of Dutch voters was greeted with relief by the German foreign ministry and Emmanuel Macron, France’s former economy minister, who currently leads in the polls to be the next French president, but could face a perilous run-off against Marine Le Pen, a more popular extreme nationalist than Wilders.

“The Netherlands shows us,” Macron wrote, “that the breakthrough of the extreme right is not inevitable and European progressives are growing in strength.”

Sarah de Lange, a professor of political science at the University of Amsterdam, agreed that the so-called “patriotic spring” Wilders predicted — victories for right-wing nationalists across Europe this year — had failed to materialize.

Time to abolish the frame of a 'populist patriotic spring' y'all!

But, as de Lange and other observers noted, it is important not to oversimplify the results as a comprehensive defeat for both Wilders and the ideology he represents, given that other parties, including Rutte’s center-right VVD and the Christian Democrats he will likely invite into his coalition, embraced nationalism and xenophobia during the campaign.

Rutte won not by resisting Wilders but by occupying his political space. The far-right wasn't defeated; it was internalized. #Netherlands

Caution to those claiming a defeat of populism. Wilders' nativist language was imitated by mainstream, Rutte and others #DutchElection #tk17

As Cas Mudde, the Dutch co-author of the book, “Populism: A Very Short Introduction,” observed in a New York Times Op-Ed:

The highly divisive election campaign, in which virtually all parties defined themselves vis-à-vis Geert Wilders, has only widened the gap between the future coalition parties. The Christian Democrats moved sharply to the right, adopting slightly softer versions of Mr. Wilders’s positions, including Euroskepticism and thinly-veiled Islamophobia. So did Prime Minister Rutte’s V.V.D. In fact, he may have gotten a boost in the polls after taking a tough stance in a spat between the Netherlands and Turkey.