According to a set of funding documents, ICE agents can use a Palantir system to access data held by agencies that possess highly classified intelligence, including the CIA. “The reason we’re here,” said one speaker, “is to call upon the people who are complicit in what Trump is trying to do.”

As The Intercept reported on March 2, Palantir is building a $41 million data platform called Investigative Case Management that allows ICE agents, including those in the agency’s primary deportation force, the Enforcement and Removal Office, to query information across several large government databases simultaneously. Documents newly obtained by The Intercept state that Palantir software also permits ICE agents to access information from the Central Intelligence Agency.

Investigative Case Management makes available to its users a separate ICE system, also built by Palantir, called FALCON. This system was created for ICE’s office of Homeland Security Investigations, which is generally tasked with pursuing serious cross-border crimes like drug trafficking, child pornography, and terrorism, but has also been behind some of the most controversial deportation actions under Trump and Obama.

HSI agents can use FALCON, a customized version of Palantir’s Gotham software, to pull data from offices within the Department of Homeland Security, the FBI, and other sources that include information on foreign students, family relationships, employment information, immigration history, criminal records, and home and work addresses.

According to a set of FALCON funding documents from 2013 that were obtained by The Intercept, immigration officials can also use FALCON to access data held by agencies that possess highly classified intelligence, including the CIA and the National Counterterrorism Center.

“Palantir enables ICE/HSI to secure information sharing with other law enforcement agencies in real-time to include Transportation Security Administration (TSA), Custom & Border Protection (CBP), the United States Coast Guard (USCG), Federal Bureau of Investigations (FBI), National Counterterrorism Center (NCC), Central Intelligence Agency (CIA) and Defense Intelligence Agency (DIA),” a 2013 funding document states. “This will give ICE an open platform that will be interoperable and have the ability to cross use capabilities such as federated search, mapping and geospatial capability, unstructured search function, visual linking with these agencies and also have the capability to fully scale the solution to enable large entity exchange (e.g. petabytes of data) between our agencies.”

Jay Stanley, a privacy expert at the American Civil Liberties Union, worries that this type of data sharing, even if justifiable in certain circumstances, could potentially be repurposed to support ICE’s daily immigration policing.

“It seems like there could be very reasonable purposes for which the CIA would exchange information with ICE,” said Stanley. “These kind of information exchanges are often initially based on particular, hair-raising scenarios, but then the routine tool is created and ends up being used for all kinds of everyday petty enforcement.”

The funding documents were provided to The Intercept by the Electronic Frontier Foundation, a San Francisco-based civil liberties group, and the records detail the government’s reasons for choosing to retain Palantir as the only vendor to support some primary functions of FALCON. The documents cover two types of FALCON data: one relating to international trade used to identify money laundering and tax evasion, and another containing information “relating to the investigation, arrest, booking, detention and removal of persons encountered during immigration and criminal law enforcement investigations and operations conducted by ICE.”

Much of the document is devoted to justifying FALCON’s heavy reliance on Thiel’s firm. “Palantir has stated that only Palantir is the authorized seller and distributor of its software products and provider of any required maintenance services for its software,” the document states. “Palantir has also not authorized any other vendor to provide training services on Palantir or FALCON.”

ICE provided a general response to a request for comment. FALCON is used by “ICE’s Homeland Security Investigations (HSI), the criminal investigative arm of the Department of Homeland Security (DHS), which is responsible for investigating a wide range of domestic and international activities arising from the illegal movement of people and goods into, within and out of the United States,” an agency spokesperson wrote in an email. “In order to protect the integrity of our investigations, ICE generally does not discuss law enforcement tools and techniques.” ICE did not answer questions about what limitations govern its use of CIA data.

ICE has repeatedly declined to answer questions about the circumstances under which FALCON can be used by agents from the Enforcement and Removal Office. One of the 2013 documents states that “an individual or subset of users” could be restricted in which databases they access within FALCON, although it provides little elaboration. Palantir did not respond to a request for comment.

In response to a February Freedom of Information Act request asking for internal rules or restrictions on FALCON’s use, ICE stated that no such documents had been found. 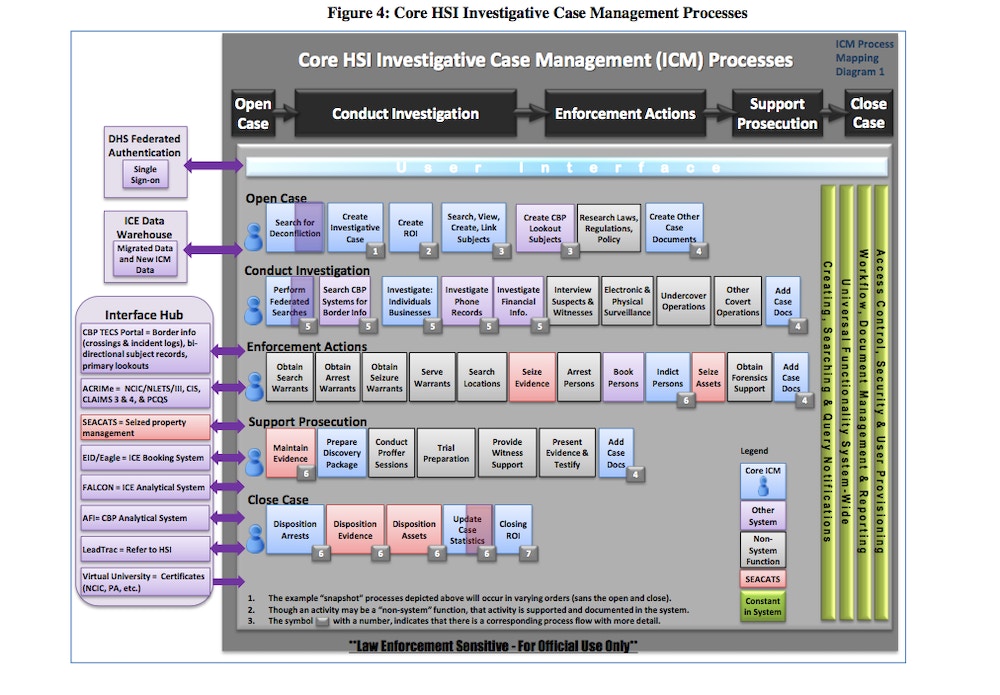 One of the 2013 funding documents states that in addition to providing HSI agents access to CIA data, FALCON also acts as a portal to data gathered under the now-defunct National Security Entry-Exit Registration System, or NSEERS, the controversial George W. Bush-era system that required visa holders from two dozen predominately Muslim countries and North Korea to register with federal authorities. FALCON users can also access the Student Exchange Visitors Program, an ICE system that tracks foreign students, as well as the controversial ICEGangs database that critics allege can trigger deportations of immigrants based on tenuous evidence of gang affiliation.

FALCON will eventually give agents access to more than 4 billion “individual data records,” according to the 2013 funding records, and gives its users the ability “to follow target telephone activity and GPS movement on a map in real time.”

The immigration agency emphasizes that an important aspect of FALCON is the ability — provided by Palantir’s trademark Gotham software — to allow agents to seamlessly search between multiple large databases at once. “The Gotham software upon which FALCON is based does not segregate data contained within individual data sets when searches are performed,” the document states. “Rather, if a user searches on a particular Person, Event, or Object, all records connected to that Person, Event, or Object which are accessible to FALCON are called up.”

The ICE documents underline Palantir’s singular role in underpinning these capabilities within FALCON, a system it says will become accessible to a growing user base over time. ICE identifies continued access to Palantir’s software updates, for instance, as being critical to the success of FALCON.

“Without updates to the software, there is an increased risk that the FALCON system could stop working properly or could be made unstable or compromised by invasive software viruses or other malware,” the document states. “Use of Palantir Gotham and the FALCON system is intended to increase over the life of the order.”

Top photo: A man is detained by ICE agents in 2015 in Los Angeles.